I hope by now you will have all read my 5-part report  on our wargame refight of the action round La Haye Sainte (LHS) on 18th June 1815, which we played here in the Cotswolds last July. I had promised, when time allowed, to give some insight into how I made the terrain, so here goes.

Many readers will recall that we fought the whole of Waterloo at 1:100 scale in June twice, and I made a custom built battlefield for that and reported the "how to" information in several blog posts. You can link back to them, if you wish, through this one:  making the trees. And here is a reminder of what that table looked like, as it was a piece of installation art that was destroyed and formed the basis for the LHS build.
So let's start off with showing me destroying the first edition of the Waterloo terrain. 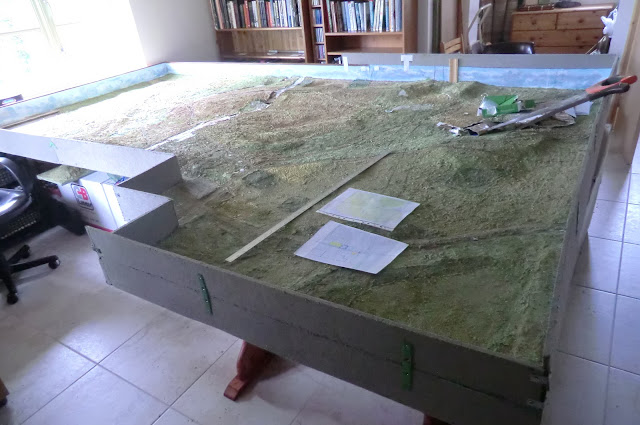 Above and below: two views where I have salvaged everything usable and got down to the basic old contoured terrain. I cut out the two pieces of paved chausee as I knew that would be useful later in the LHS setup.
You can see I have completely rebuilt what was the lower side of the table background border, and built it up even higher at the wider end.  This is intended to accommodate the heights of Mont St Jean and allow a nice long slope to the far narrow end for the French to fight up. My maps are on the table to work from and you can see them in detail  here 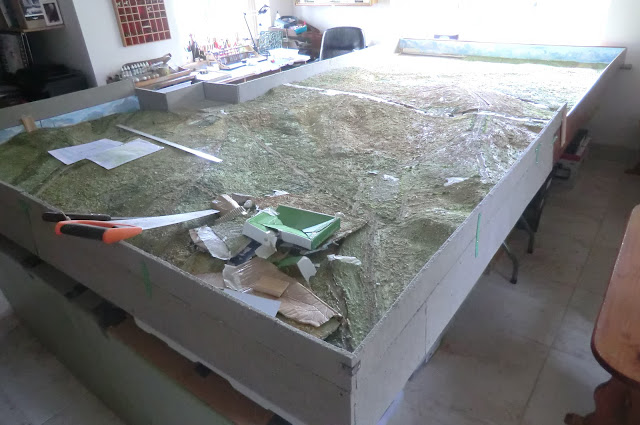 Now I built up the rough idea of the contours using polystyrene packing blocks, cardboard boxes and then layers of thick cardboard, occasionally cut or torn to make the shapes I needed. 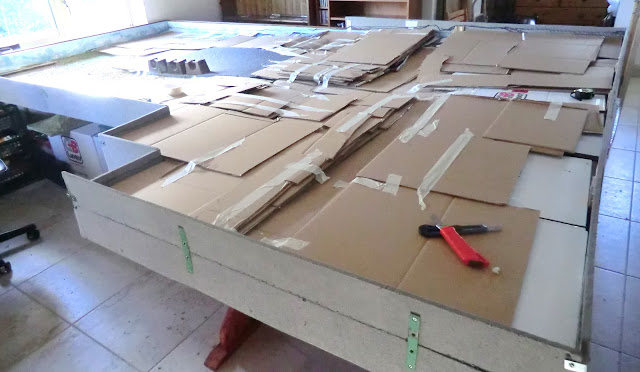 These two photos show white polystyrene covered with cardboard. I used very little glue but find that masking tape is very quick and versatile in modelling projects where you are only using a temporary hold until later layers. Hopefully you can just about discern the sunken roads and the sandpit. I had to compromise a bit on height as I should have gone even higher but I needed to preserve a lip around the high ground so figures would not risk being knocked off during play (it was a long way to the floor if you are 28mm tall!) 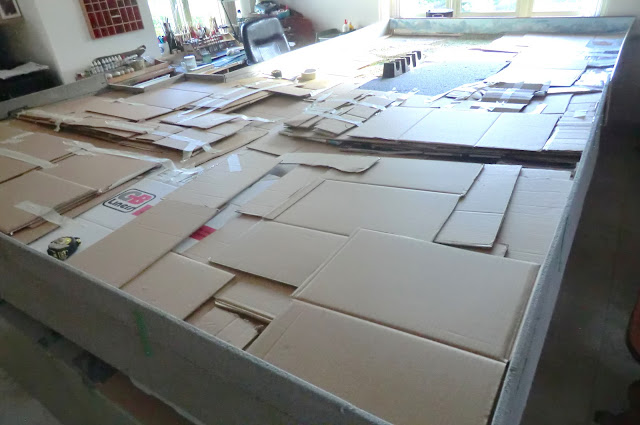 Ok, so you spotted those odd shapes where you'd expect LHS farm to be? I found a big piece of grey polystyrene about an inch deep, and big enough for all the farm buildings, so thought it would make a good level base. Trouble is I had not allowed for contours and ended up packing it and then having to PVA glue it and then use 3 antique 7 pound weights to secure it while the glue dried.
You can see things slightly better in electric light: 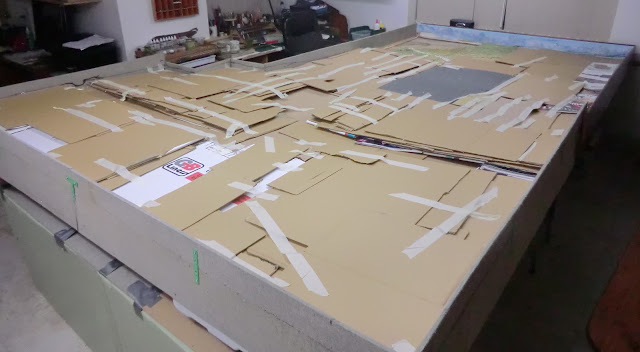 Even then it was not level. However, if you look at the original LHS the slope is still evident, but all model buildings have horizontal bases, so I was going to have to compromise on this aspect too and fudge the final modelling detail to give the right impression, read on....

I love this bit. Get a pile of big sheets of white packing paper; bowl of slightly watered PVA glue; a wide brush, and put on rubber gloves. Then just build up a beautiful layer of papier mache effect that allows you to roll up bits of paper and pack up or round out wherever necessary and cover with another sheet, and so it goes on. It's sufficient to put only two or three sheets thick as the PVA makes it dry fairly hard and more layers will go on top anyway. 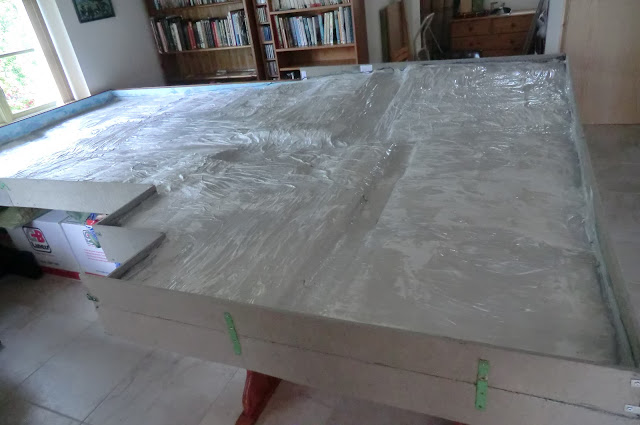 Now you can see why building up the side "walls" all round was necessary to provide an anchor for the edges of the paper which produces a nice firm terrain for heavy metal figures even though the inside is quite light. 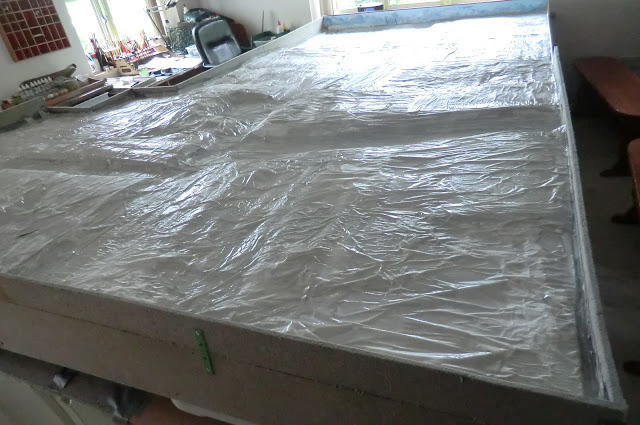 The following photos shows the dried contoured landscape which I have started to populate with crop fields. 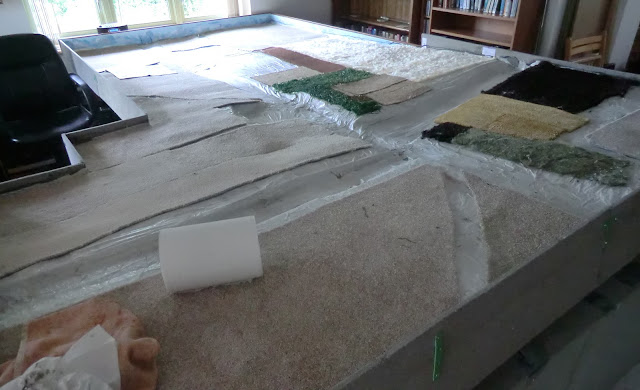 More detail in this one. All the beige fluffy stuff in the foreground is carpet offcuts I had  intercepted from the skip (dumpster) when parts of our house were being carpeted in 2014; I knew it would come in handy for this. Various treatments will be added later. The green patch in middle distance is imitation grass mat used for display. These are actually remnants I inherited from my mother who was a keen doll maker; she used them to display cute stuffed felt animals. I think she would have been proud to see them being used for a different kind of model display. 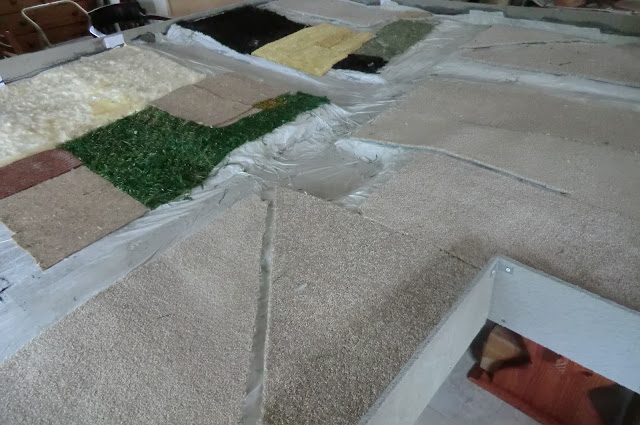 Around that are beige felt sheets that I salvaged from an old cooker hood - they are unused filters. The pale yellow fluffy stuff is standard teddy bear fur, provided by Kevin, and probably proved the most realistic of all my attempts to represent trampled crops, once treated. In the distance there is dark brown stuff and that is also teddy bear fur bought by me on Ebay and was left over from the fun I had making a fur colback headgear for my Hussarette (full size) modelling, such as:
With "M": 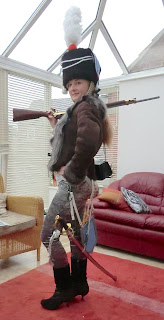 Right, that's enough furrivolity for now - let's get back to serious miniature modelling!
We move on to some close ups of various treatments of surfaces.  The basis for a lot of the muddy roads, rough crops and grasses is my own recipe "gunge". This is art not science so I can't give a formula. It is always an intuitive mixture of PVA glue, acrylic or other water-based paints, plaster type filler (with water to mix it), sawdust or wood shavings - size dependant on the task, and sometimes sand or very small stones. 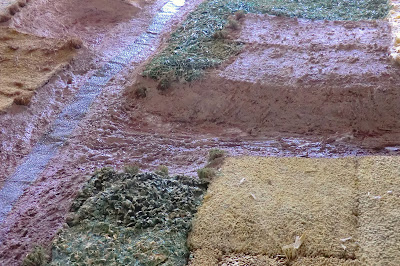 Much more gunge and/or wash application and dry brushing later I had achieved an overall effect I was happy with.


From now on I was adding detail. First of all I didn't need to make any more trees as I had about 150 from which to choose from Waterloos 1 and 2 (see link above). So used the larger ones for the orchard and smaller ones on straight bases as the core of some hedge lines. The final hedges were a mixture of just bush or trees with bushy hedge material in between. I used the same techniques of paint, dry brush and commercial foliage clumps and scatter as in the earlier terrain.

I evidently finished my photo recording of the process at this stage, knowing that I had shown the techniques in the earlier posts. So I will finish off with some more photos of the game in progress, choosing some in which the terrain details come across best. 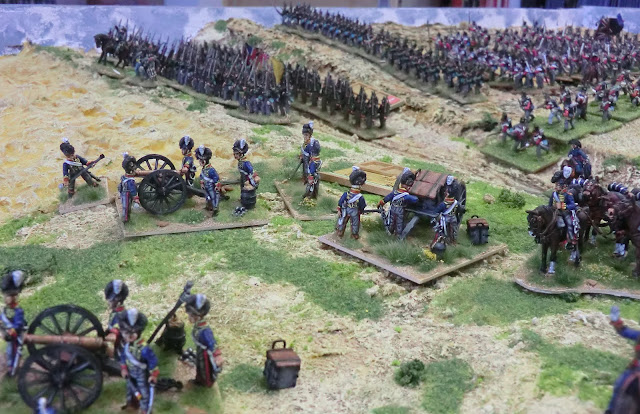 Above and below: the mound by the Elm Tree crossroads (Wellington is still there). This and most of the other sandy coloured soil had been coloured and flocked to be sympathetic to Kevin's basing style, of which these RHA guns are a good example. 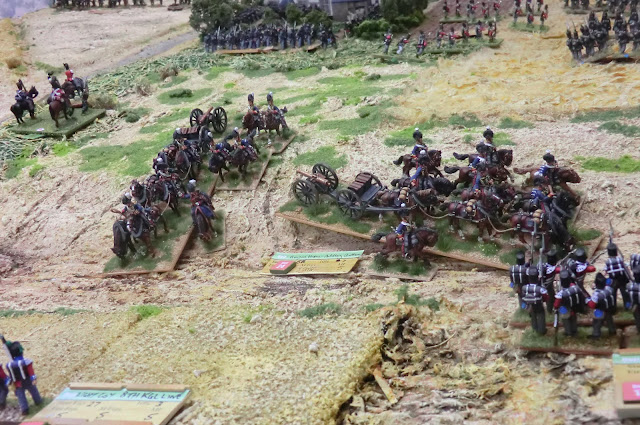 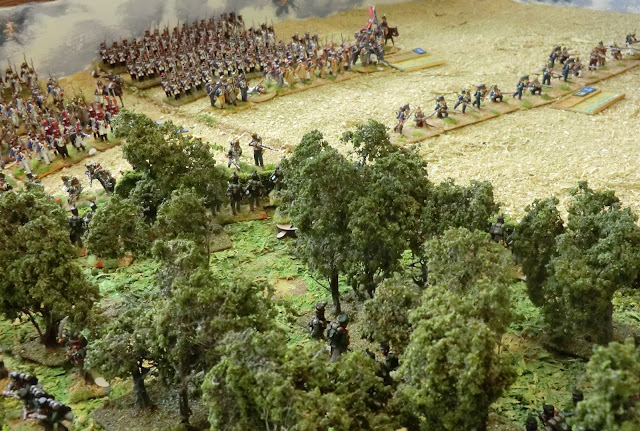 Above and below: The LHS orchard showing trees and hedges as well as some field effects and the paved chausee 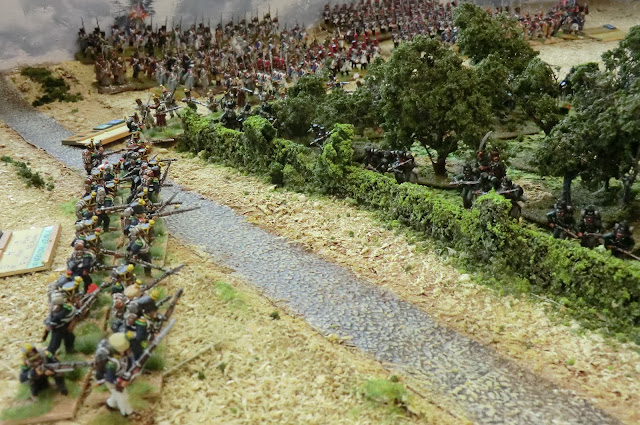 So I hope this has been interesting or useful, please let me know. Feel free to ask any questions via the Comments box below.