Sincere apologies to my regular followers for the lack of blog activity. We had the second day of our rules testing and it produced so many fantastic photographs that I knew it would be a big job editing them and deciding what to use. That might seem a lame excuse for not getting round to it and I promise they will appear soon. However I have not been idle as the prospect of making the terrain for our 1:100 Waterloo weekends is now looming large so I buckled down and got on with it. My room is now the proud host to 90 square feet of sculpted rolling Waterloo farmland and roads and streams at one inch = 60 yards. I'm currently working on the buildings, and the trees and hedges will follow that. Something else to show here when I'm finished!

Meanwhile, human dynamo Kevin East is still busy on units at 1:3 scale for my La Haye Sainte game in mid July, and he has just finished a French horse artillery battery complete with mounted gunners, and horse holders for dismounted gunners. He has provided plenty of photographs and an account of their creation.
In their honour I have changed the heading photo of the blog to show a set up we did after the test game when the battery was actually less complete than it is now. Here it is within the blog post for posterity. 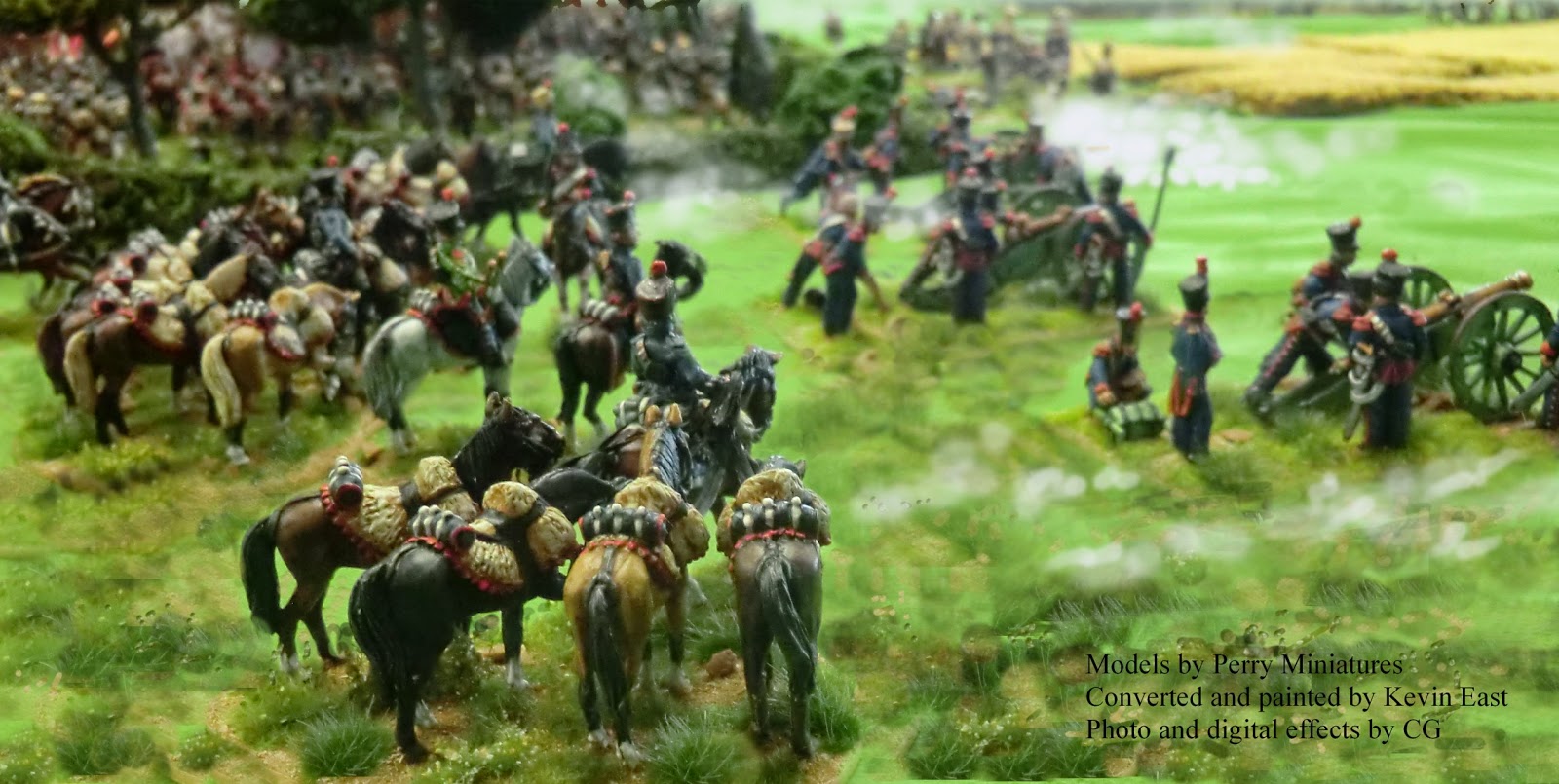 And in Kevin's own words:
"Herewith the latest photos of models from my paintbrush. During our La Haye Sainte (LHS) refight we will
have a French horse artillery battery taking part (attached to 13th Cavalry Division operating with Dubois' Cuirassiers Brigade) and as such required one to be modeled at 1:3 with all the caissons, wagons, limber, guns, crew, riders and command figures for such an appearance on the battlefield. 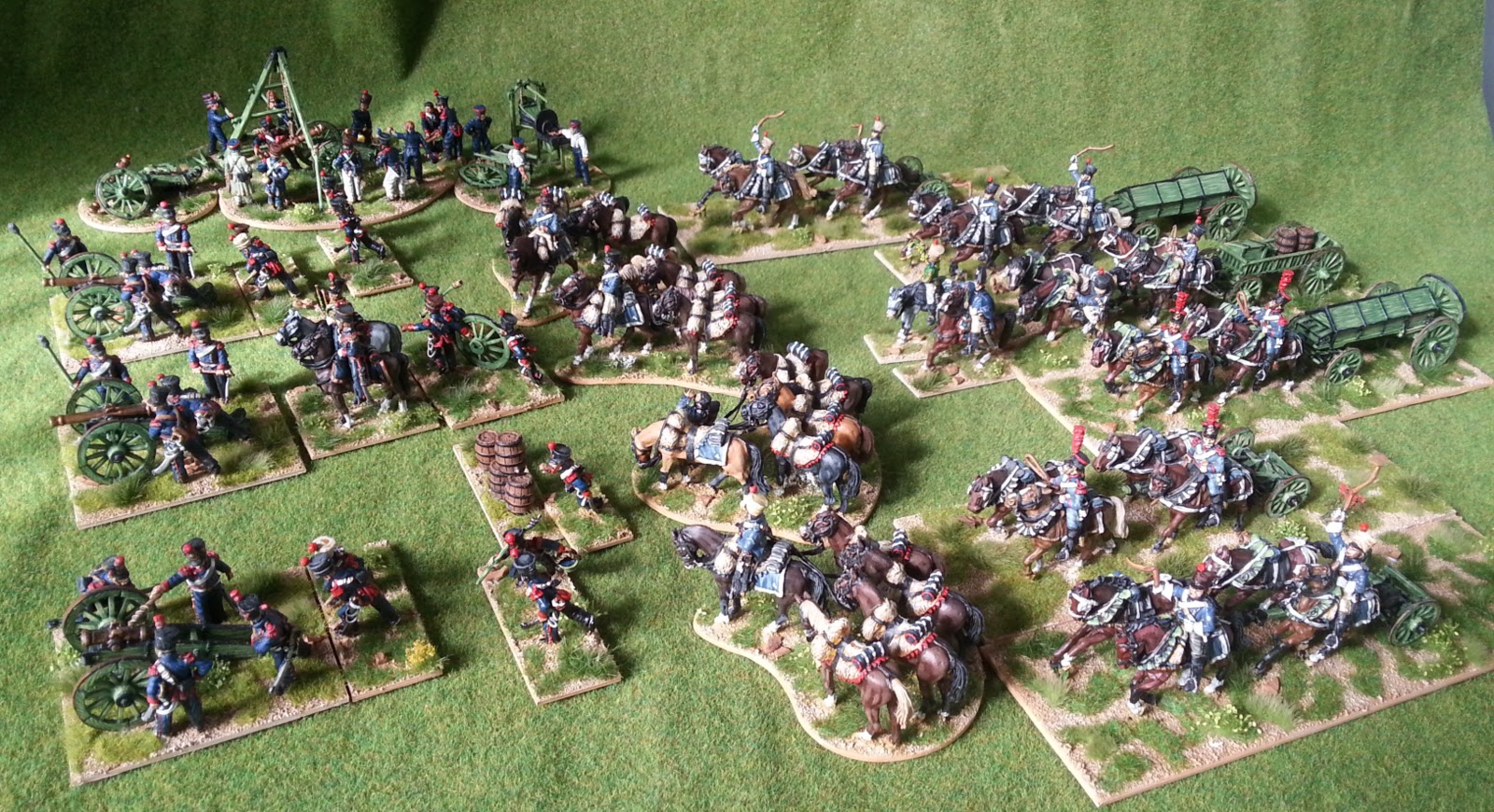 This created quite an amount of collecting of figures from various sources. namely Perry Miniatures,
Westfalia miniatures and Wargames Foundry. I also added items such as a destroyed gun
(old Hinchliffe model), 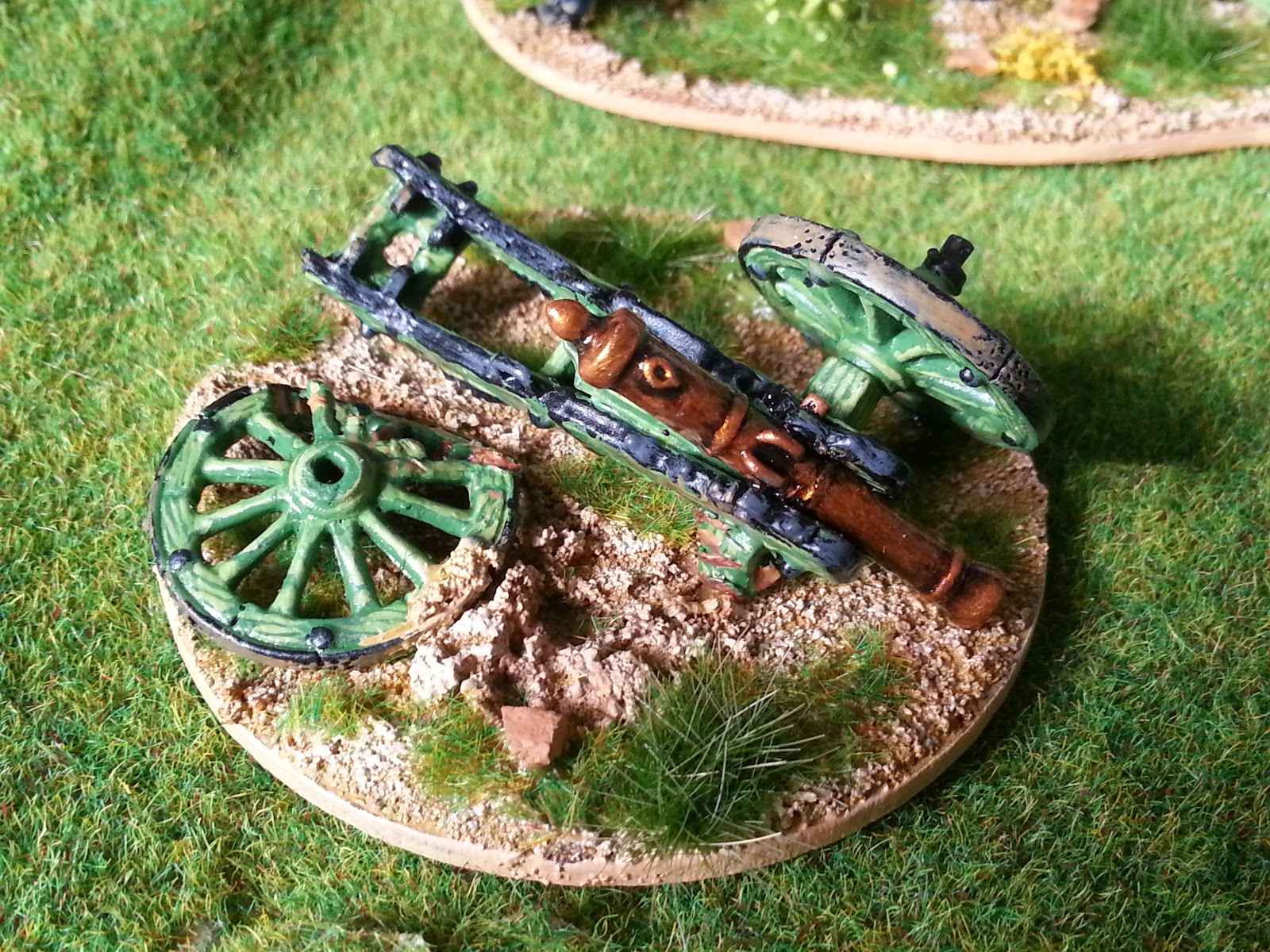 The figures for the latter two are supplemented by Perry  Miniatures to add more atmosphere but the vignettes that Westfalia produce were a delight to model and paint. The cannon crane is the biggest vignette I have achieved to date with 11 figures. 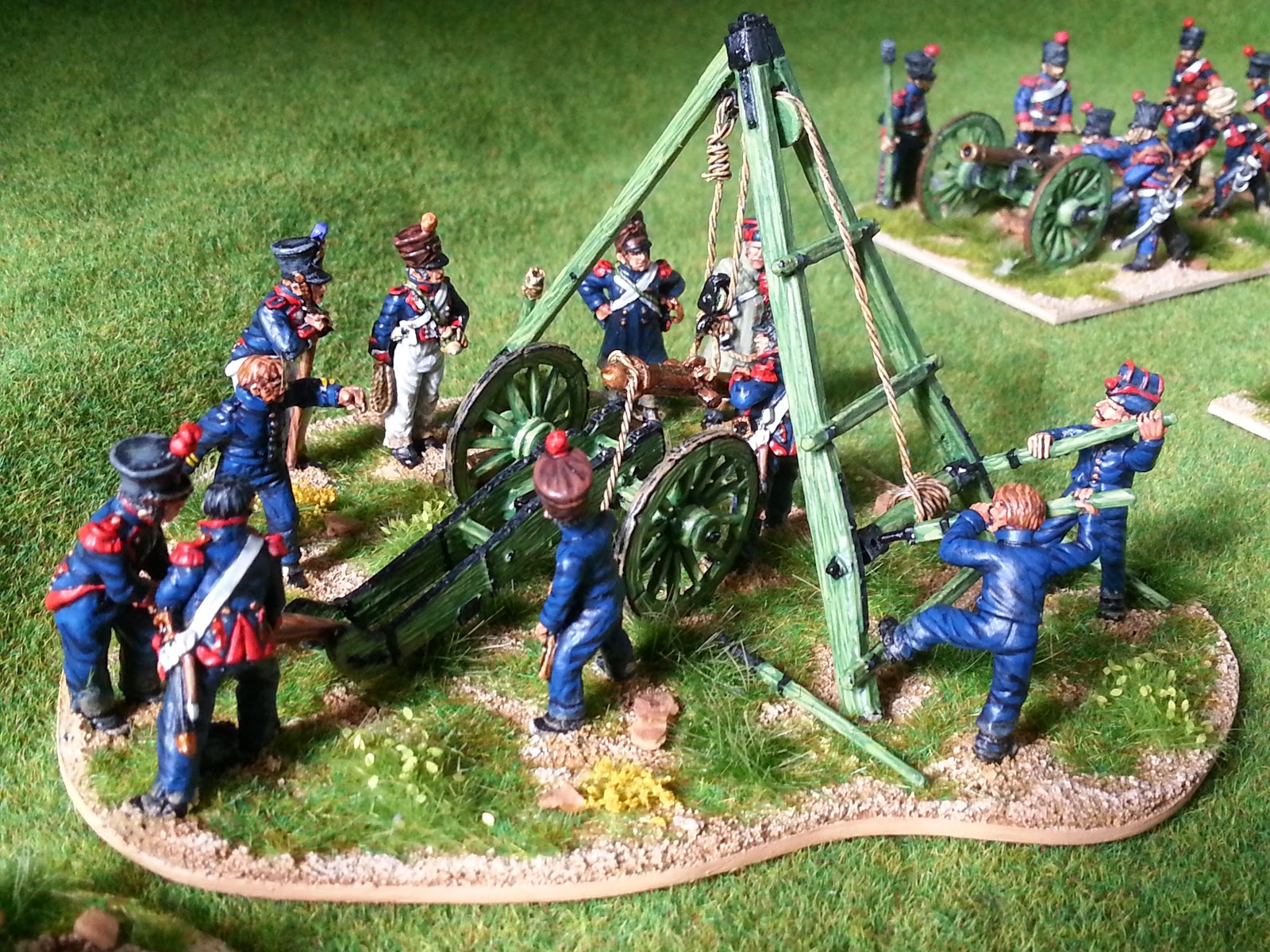 Of course as in the 1:3 RHA battery that is also shown separately in this blog, (RHA at 1:3 well-almost) the models represent the battery in motion and also unlimbered in action. 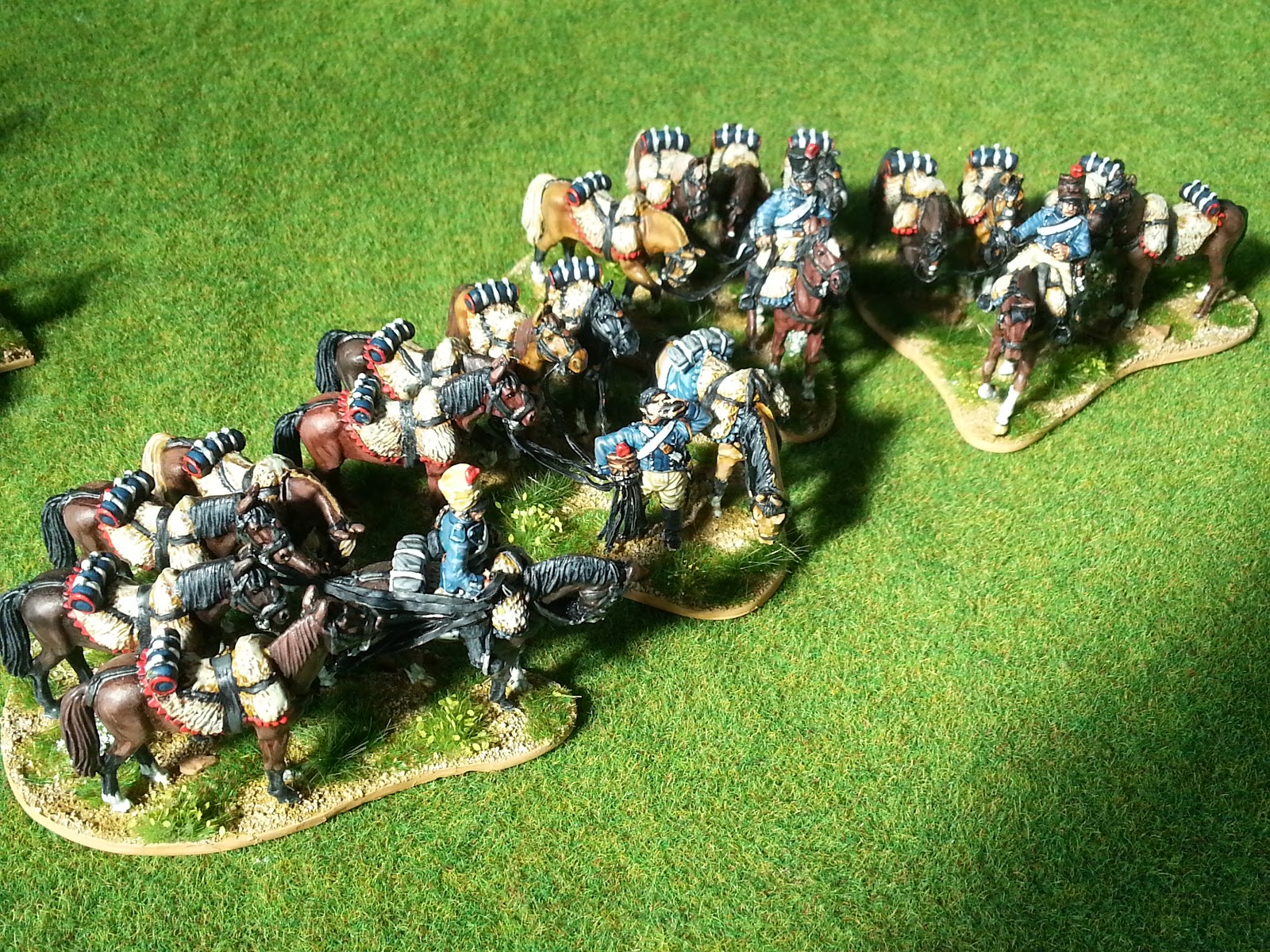 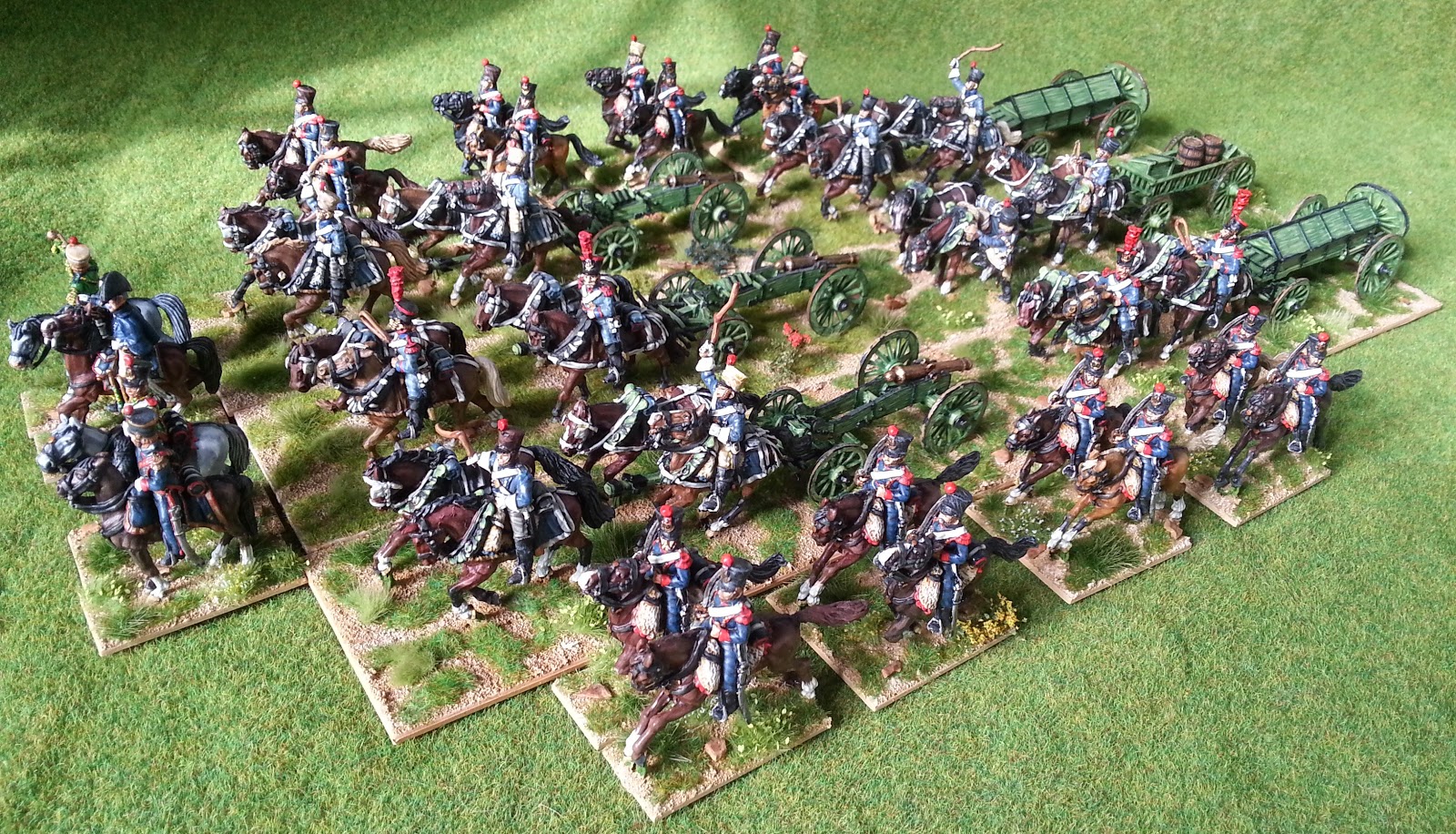 So the mounted gunners would never be on the table top at the same time as the dismounted figures – hence the two photos of  the different scenes. Also the forge and cannon crane would never actually see service on the table top unless one of the guns became a casualty in the wargame. Quite a lot of expense and time……..and it may not be used at all!
Ahh, the vagaries of miniature wargaming!

The baggage cart is also a Westfalia product which I think is a particularly nice piece especially with their
separately purchased horse team and riders.

They also do command figures of a mounted team officer and bugler which has come in useful here. 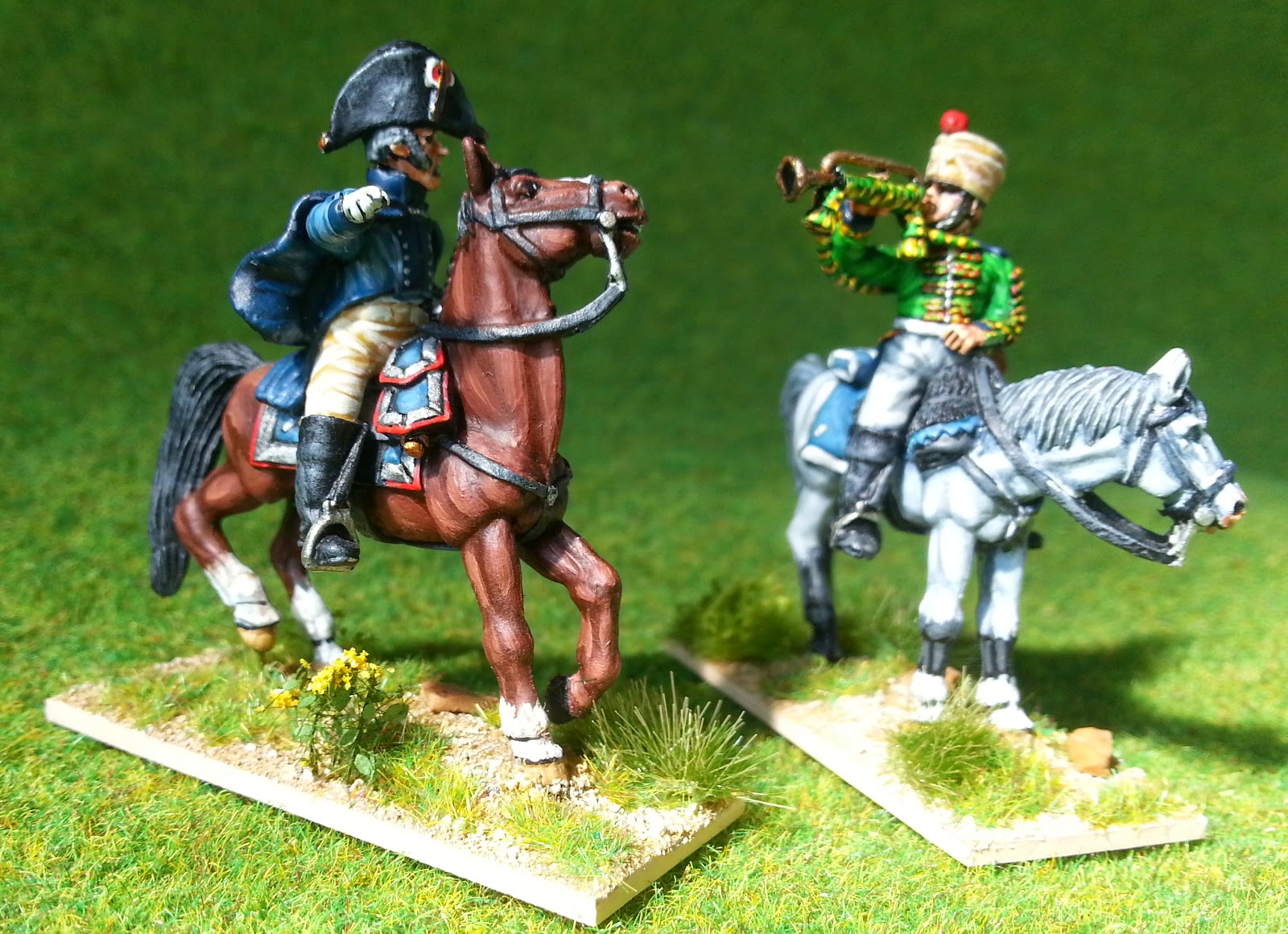 The handheld horses vignettes (four of them!) are Perry Chasseur a Cheval horses in standing poses plus
some team riders (Line Chasseurs) on (Cuirassier) horses depicted as limber team members. The mounted
gunners are all elite company Chasseur a Cheval Perry figures painted as horse gunners. I did have to do a
bit of metal cutting to remove their carbines and elite chevrons on their shakos before allowing
painting to happen. 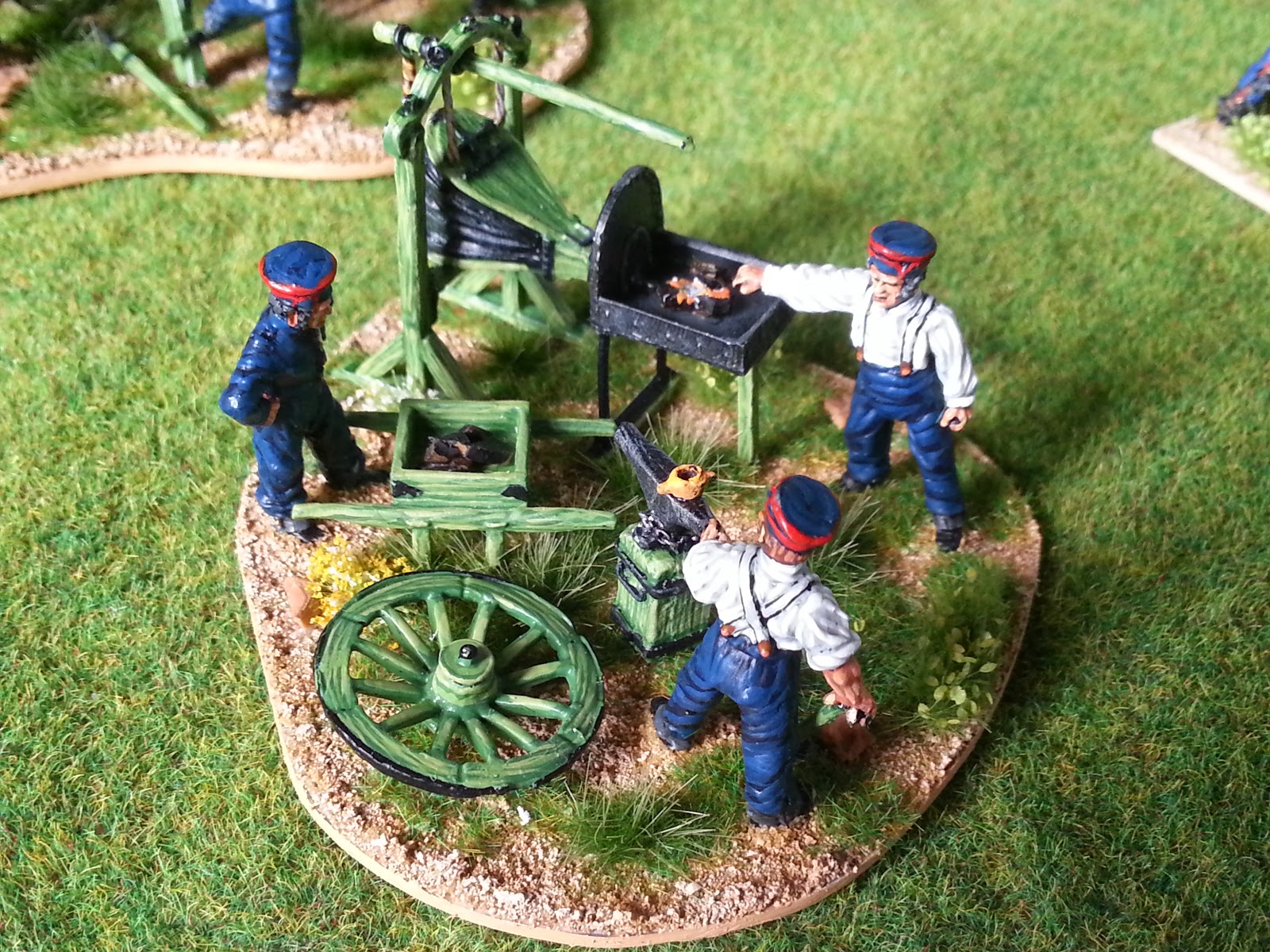 Some of these items are from my collection that I already had, namely three guns and a limber.
Apart from that everything else is newly created and painted for use in our specific 1:3 LHS wargame. 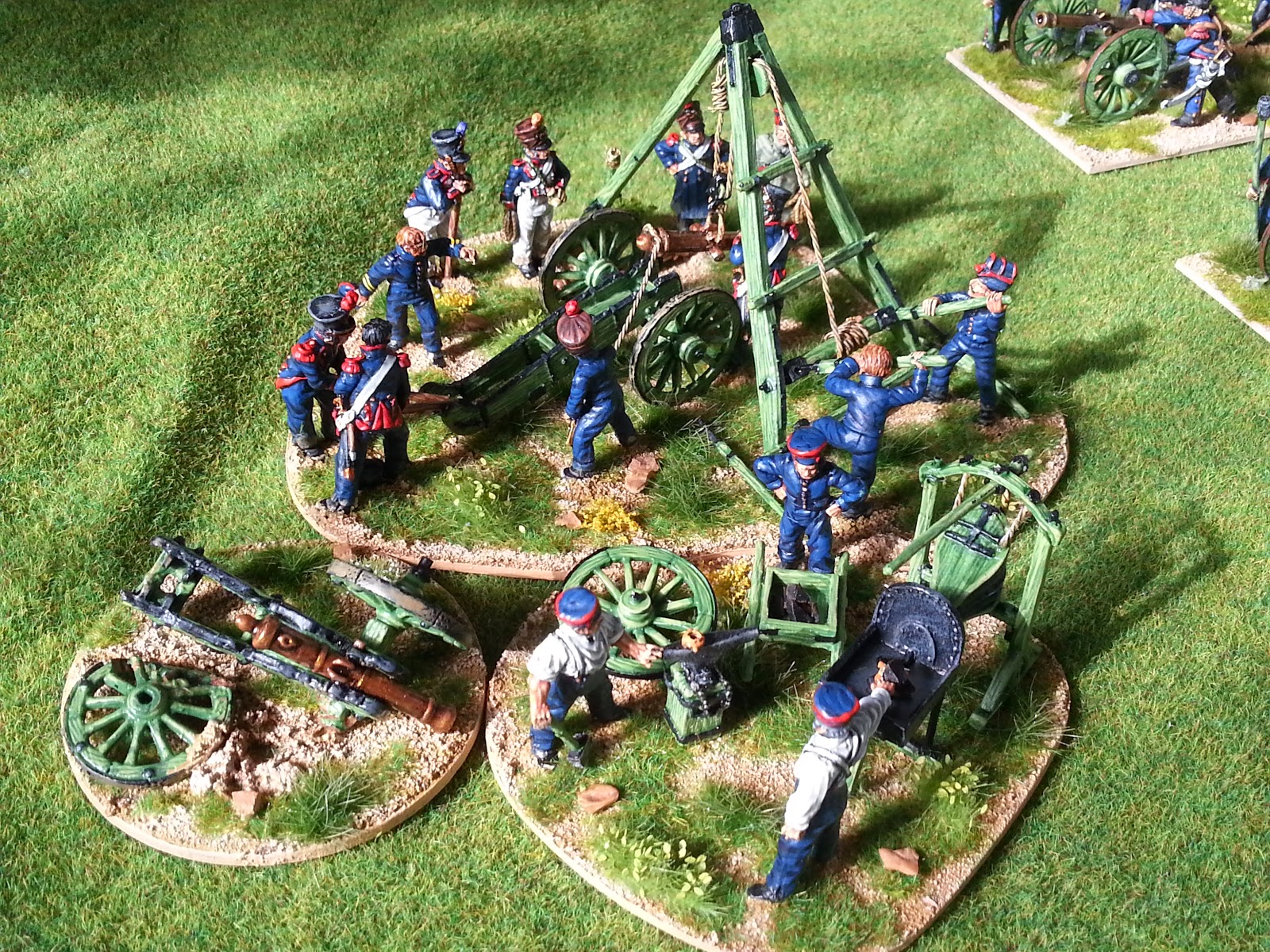 I am now onto creating further additions to the RHA  to complete it’s presence on the same model
battlefield that Chris will be creating soon.

Can’t wait for all this to come into use!

Hope you all enjoy. All the best.

[By CG. For the purists I should add that according to the "Waterloo Companion" this battery had a strength of 159 plus unspecified numbers of the 8th Train company. As I've intimated in an earlier post we have to take a pragmatic approach to the 1:3 scale for artillery and assume a lot of the "tail" elements and extra ammunition wagons would be too far to the rear to need representation- hence Kevin's battery of about 30+ figures and the rules also include the horses on the strength for morale/losses purposes.]

I'll finish off with a photo from our test game showing Kevin's uncompleted battery supplemented by other models courtesy of Paul D. 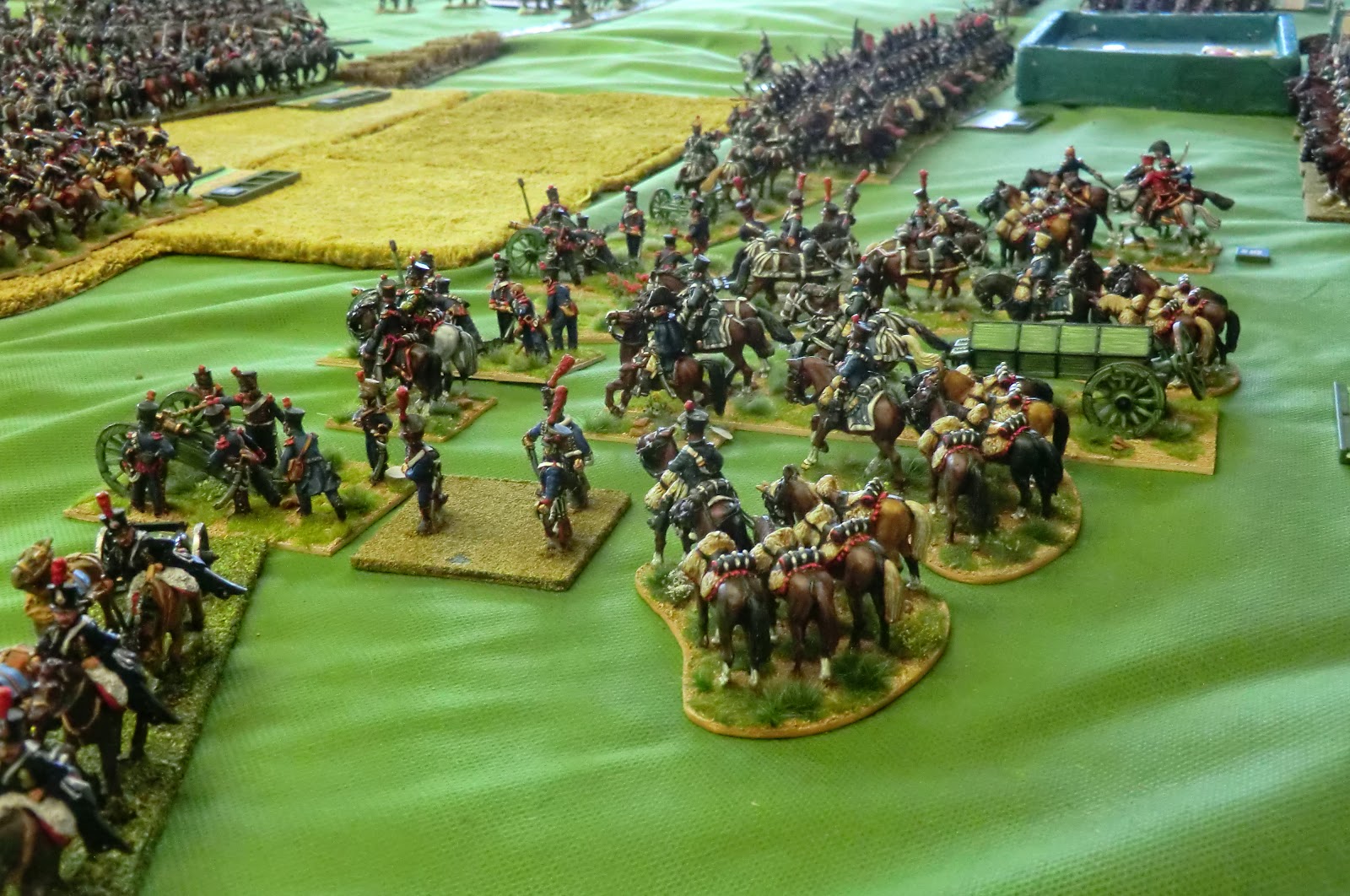