Hougoumont at 1:3 scale: How I made the Terrain, Part One


Thanks to everyone who commented on the previous post describing making the terrain for  La Haye Sainte at 1:3 scale as part of last year's Waterloo wargaming celebrations. While I'm on a roll I thought it would make sense to do something similar for our refight of the action round Hougoumont, which we played over 3 days in mid September 2015 at my house in the English Cotswolds, and which I will relate in due course.
But for now the terrain making.

To start off, here is a view of the finished terrain before it got spoiled by having 3000 little tin men trampling all over it. As you can see there are similarities to my LHS terrain, for obvious reasons, but this proved much more of a challenge and I'll be describing, among other things, ponds, vegetable plots and formal lawns and shrubbery! 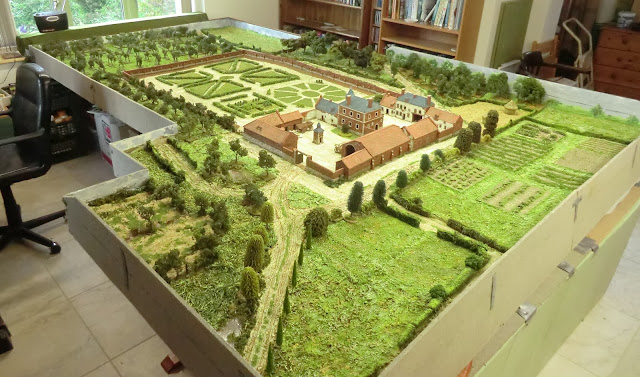 Just a reminder that these magnificent resin buildings by Hovels were painted by Kevin East of Bristol in 2013 and so enthralled Paul D and myself that we told Kevin he had to organise a game with it in 2015 when the necessary armies had been assembled. I took on making all the surrounding landscape. The buildings are 1:1 for 25mm figures, but we are using 28mm, and when mounting figures on bases they tend to take up more space than if the figures were real and jossling shoulder to shoulder, so I figured we could do it at 1 figure = 3 men. Using this ratio with scale unit frontages seemed to work at approximately 1 inch = 3 metres ground scale.  Turning to the maps in ''the bible" - Mark Adkin's Waterloo Companion, we tried various combinations to fit our notional 96 square feet of terrain. For reasons I'll go into when I describe the game we settled on this one.
So I had to start by destroying the La Haye Sainte installation art by salvaging whatever I could and dumping the rest, then building up again

Once that was done it was time for the large pieces of paper and PVA glue to make a papier mache covering that would dry fairly hard.

At that point I needed to place Kevin's model buildings in situ and experiment with the exact placement of all those wall pieces he had painted. 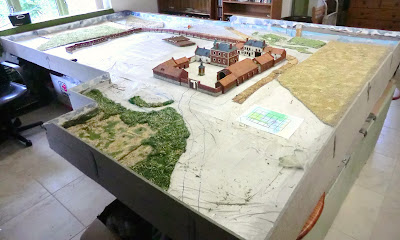 Above and below: You will recognise much of this from parts of the LHS set-up. I was interested in preserving work already done on texture and colour where possible, but with the expectation of renovating and improving and blending in wherever appropriate. 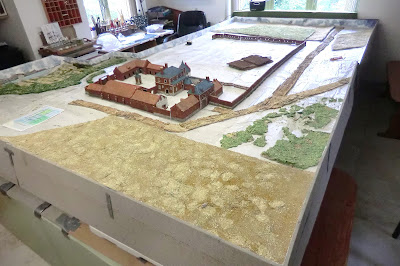 At this point things were about to get messy so I removed the resin models and marked their positions. Where they had been I pasted the shapes with a thick "gunge" of acrylic paint, PVA and sand/fine sawdust. Over the entire remaining area of the enclosed farm/chateau and the walled formal garden I painted with a few mms deep layer of the same cream coloured silicone exterior wall coating that I used for the LHS farm base. It has 2mm grit suspended in it so dries with a texture resembling course gravel on a model of this scale.
My photo record shows that I made a start on the pond by the North gate about now but I will show creation of that later so as not to interrupt the flow.........on with the fields. 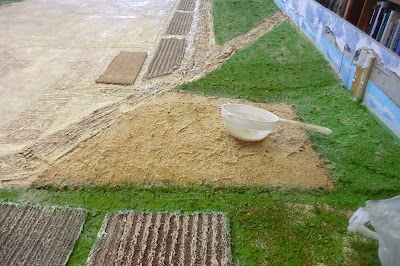 Above and below: Close up photos of the area near the South gatehouse. A hay field was necessary here and I've used paint and PVA over one of my old LHS course trampled crop fields then sprinkled with sawdust through an old plastic sieve (don't use a clean one from the kitchen or it will lead to domestic strife!).  Ribbed carpet offcuts have been drybrushed with highlights for the vegetable plots 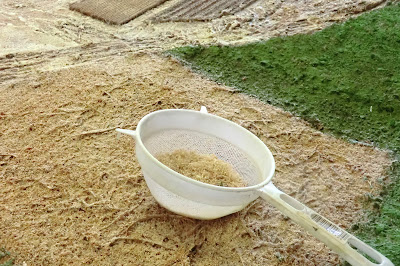 Putting back the resin models brought it to life. Here I have practically finished the fields and stained the new gunge roads to match the old ones. There is still a long way to go and I will cover very shortly the ponds, crops and formal garden.
I'll leave you for now with a photo of my busy work top showing a wide selection of materials I used for this project. 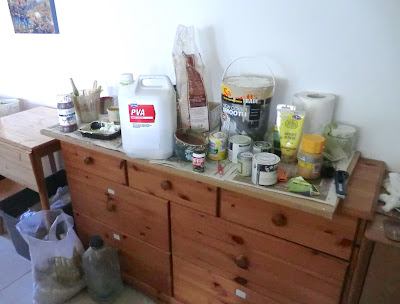