Apologies for the delay in continuing this story but I've been very busy building the terrain for our next one - Hougoumont. If you have just arrived, or wish to have your memory refreshed on the basics of this unusual wargame, please see la-haye-sainte-refight Part One

As they would be present for all three days of our game Richard volunteered to be “co-ordinator” for the French, and James for the Allies. It was never intended that players would represent specific commanders for the reasons given in the previous posting about the difficulties of  chain of command as part of a bigger battle. Instead, they tended to divide the troops up for participants more or less so they could reach them from each side of the table as we were playing length ways. That was particularly important when employing “the extra bit” of terrain.

The Plans
As it happened Wellington was by his Elm tree at the start  of our game. The Allies had 4 “free” Initiative tokens and Wellington’s 2. Uxbridge was also present on the table but since he had no cavalry nearby was just for decoration at this stage!  James had a fairly aggressive policy which involved using the Luneburger’s existing orders to press forward towards La Haye Sainte (LHS), but also advance downhill with the 95th Rifles and 1st Bn KGL Light. Hence a swathe of green jacketed infantry would confront the French at close quarters, strongly contest LHS Farm, and mount a fighting retreat elsewhere.  The ridge line of Mont St Jean  (MSJ) would be back-filled by the red-coat battalions. The Life Guards would move up in due course to support, or counter attack French cavalry.

Richard reviewed the pre-written orders for his infantry. Charlet's Brigade of 54th and 55th Ligne were generally to press forward taking in an attack on LHS as they went. My expectation was that this meant attacking the orchard frontally and also initially going up the flanks of the farm buildings and garden, but events turned out differently. 28th Regiment  of Bourgeois’ brigade was to advance up towards the sandpit area and beyond. All had ultimate orders to drive the Allies off MSJ crest.  I gave the French some latitude with the 1st Cuirassier Regiment and they chose to make an attack up the left flank  in  column of squadrons, supported closely by the horse artillery battery. At the very start they had 5 Initiative tokens not yet supplemented by any "on-field" senior commanders.

As stated previously an Event was rolled for by each side each turn but I’ll only include them in the narrative if they have some significance.

In accordance with the plan all of the Allied green jacketed units moved steadily forward. This movement obviously reduced the fire effect of those in range with rifles. However rifle fire from 2nd Light Bn  KGL in LHS took a toll on 1/55th Ligne who were shaken. The French infantry pressed on undaunted,  buoyed up by the arrival of Marshal D’Erlon in person due to the Event roll. 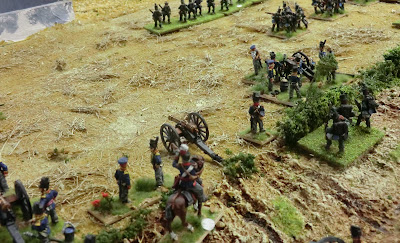 1.45 - 2 .00 pm
Marshal Ney arrived leading the 1st Cuirassiers on the left flank and adding a much needed two Initiative tokens to the French. The Prince of Orange arrived in the Allied front line and, to introduce a bit of local colour, James was forced to make a compulsory change of formation! He chose to close up the Luneburg battalion into a 4 rank deep formation rather than form square. This made a lovely target for some of the Grand Battery guns this turn and significant casualties resulted but Luneburg stood firm.
Rogers Foot Battery managed to get rid of its "Shaken" marker and reorganised to man the uncrewed gun.

A blow for the French with their Event roll - one of the batteries in the GB was given orders to deploy elsewhere and a further roll proved it to be the heavy battery.  This relieved some of the pressure on Rogers' guns. The Allies were somewhat relieved to lose the Prince of Orange as their Event.

Waterloo refight banter: There were a few gasps when Pat pushed his 100- figure column through the orchard hedge and I grabbed my Stanley knife to literally cut the gap - "Well, it's installation art for a one-off game!" At the point when Pat's hard fighting into the orchard was beginning to show results he said enthusiastically  "I'm enjoying this!" Deadpan, Mike's Major Baring replied "Well, you need to get out more then".

The Allies Event roll caused one of those sequences an umpire can usually only dream of. Last turn James had called forward the limbers in order to get Ross's guns away, of course he hadn't intended to leave the field. However a score of 17 indicated orders from on high (Wellington) for Ross to move off table to the West; a historical instance under which Wellington was reinforcing his right centre on MSJ, but not part of our field. James took it very well as he was beginning to mask his own field of fire down the forward slope anyway. 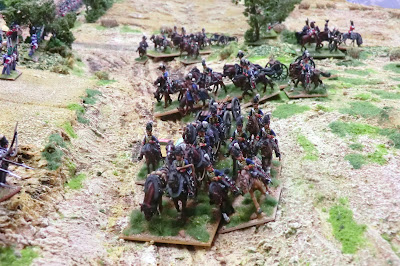 Things were literally coming to a crunch in the La Haye Sainte Orchard. Our push-back rule meant that a thin line, such as presented by the riflemen, could not expect to hold their ground in the light obstacle afforded by the apple trees against such columns. The three companies of the Advanced Wing had been plucky to stay and slug it out for an hour but would now suffer under the combined weight of three battalions. The Initiative system meant they could be hit by successive battalions commanded by both Richard and Pat, suffering disorder in the push backs and losses from the melees. They got split up with 1/55th stomping over part and pressing on towards the LHS walls. The melee swung like a gate and we had to temporarily remove trees to accommodate the masses. The following sequence of photos shows the retrograde movement of the 2 LB companies. 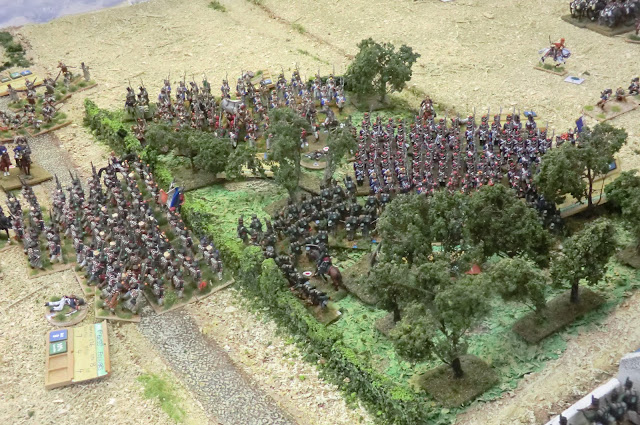 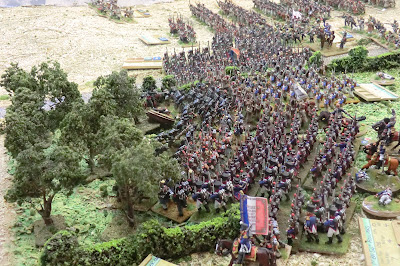 Pat pressed on with 1/54th Fusiliers engaging the withdrawing KGL riflemen up to the LHS walls, and within a short time the fate of the two parts of 2 LB's Advanced Wing was sealed. Major Baring was killed in the melee at the centre of the orchard and half his remaining command were killed, the rest were surrounded  by 2/54th and 1/55th and surrendered. This half of the battalion had by now suffered 70% casualties and the remnants broke, scrambling over the barricade and running past the now-closed LHS gates up the paved chausee.
Richard had by now begun to realise how dangerous the fire from all those riflemen had become, so he started to direct artillery fire on them. The initial 3 shots resulted in 7 rifle figures being removed, the beginning of significant attrition.


The Life Guard Squadrons now formed march columns so that they could manoeuvre round 8th KGL and one advanced up to the crossroads while the other made for one of the pre-made gaps in the hedge leading to the left (East) side of the crossroads behind the sandpit.  This sequence of photos shows how they did it.

The final action of this turn, and the first day's play, was for a squadron of French Line Lancers to arrive hot on the heels of the Scots Greys. One turn behind, but moving faster than the weary and weakened Scots. This photo also shows that Mike was persisting with close range fire from the Rifle company against Bourgeois' Brigade. In the absence of their Voltigeurs 1/28th commander had deployed his Grenadier company to skirmish and protect the column to some extent.  2/28th is now on the field behind the 1st Battalion. Events were to show that this Rifle company had over-reached its support but had gained some time by slowing up Bourgois's advance considerably. Rogers' battery was also inflicting some casualties on the French columns from the ridge crest. 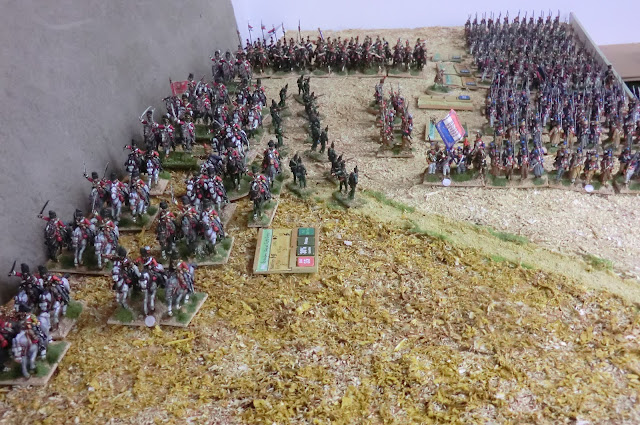 This took us to the end of Move Five and around 1830 hours real time, not too bad as I had hoped to do six moves on the first day. Next time - the Second Day's play, joined by two more participants.

Some credits:
Artillery, wagons etc
Learning about our project on the A Military Gentleman Forum, Niels of Westfalia Miniatures had donated some British artillery equipment for Kevin to paint and use. A couple of Westfalia pieces are in this scenario but we do have more that couldn't easily be used in the front line. Thanks Niels. Well worth looking at the company website for a lot more than Napoleonics.
Status Bases and Markers
If you want to get yourselves, at a special price, some Wargamer ADC plastic status bases and markers like Martin had provided to us for these games, please visit this blog post first waterloo-project-record-keeping for the link.