Waterloo Project: 191 from Luneburg on the painting table

Kevin puts me to shame with his prolific output, (french-brigade-510) super detail and top quality figures, and so to try to keep my end up I'm just showing what is in store for me next. Unlike Kev's gourmet approach to his models, I tend to love doing my wargaming on a shoestring, so I have been accumulating the Hanoverian Luneburg Battalion slowly for about the last 8 months or so, bit by bit. In fact every time an opportunity came up  to buy some "British Infantry in stovepipe shakos" at a good price on Ebay, or cadge them cheaply elsewhere.

I've got all the figures I need now for our 1:3 scale representation and have mounted them and undercoated them in Army Painter "Army Green" spray ready for painting. Before I say any more here is an overall shot.

They are an eclectic bunch, but all judged by my eye to fit together on the tabletop. They started off when my art patron, Ian, offered his unwanted boxes of Victrix French and British to the 1:3 project. Shortly after that I bought a batch of Front Rank British Light Infantry from James Fergusson of Fergscalemodels. That eventually led to James joining our project and supplying lots of boxes of plastic figures to me and other members of the team at a good price. Some of those ex Ian and James Victrix Peninsular Infantry have found their way into the Luneburg ranks here. In addition there are batches of Foundry and Essex, and I've included a few Perry Hanoverian buglers and command figures. There was also an Ebay batch that looked a bit like old Hinchliffe style but bigger, so not sure what they are.

From my research it seems Luneburg was one of two Hanoverian "light" battalions but on the day was being used as a field (line) battalion so I've based the majority in 6s to ease that function.  Apparently it was composed of four large companies. But info also suggests that 1 in 3 men were armed with rifles not muskets, I assume that means within each company. At Waterloo 50 men were detached to join the Nassau troops defending Hougoumont, I'm guessing they were all rifle armed skirmish types. Followimg this logic my Luneburg battalion would still need a large quantity of skirmishers so I've based this first company in 3s using kneeling, firing and at the ready poses so they will adopt  "open order" more easily in our game. 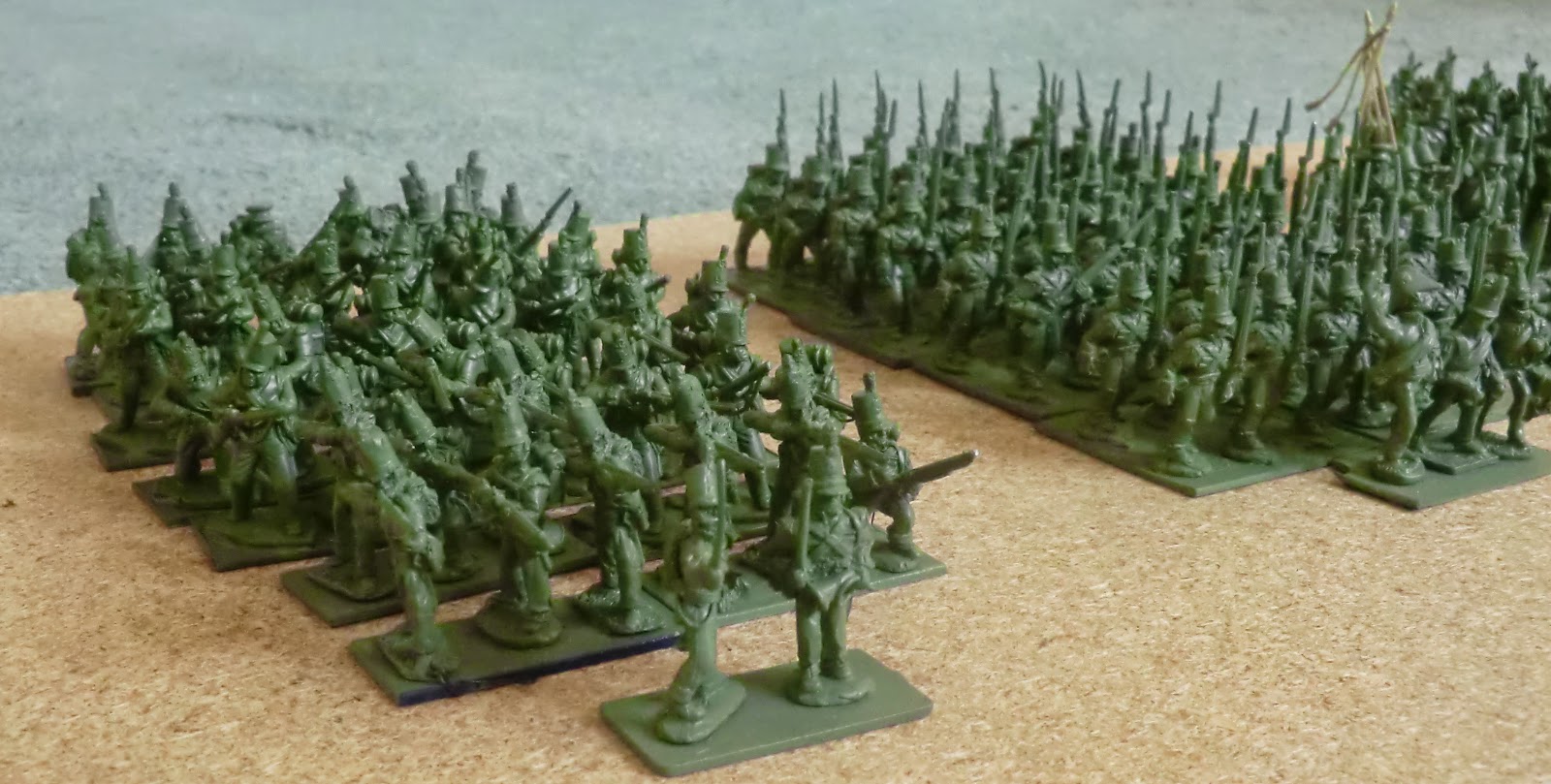 The models don't have rifles as such but I've removed most bayonets and from a distance who will notice?

I've put the other companies together just in a pragmatic way that makes each one a bit different but hopefully looking as if they belong together - the full paint job will help that. More formal poses have been used, but even different manufacturers in the same company. 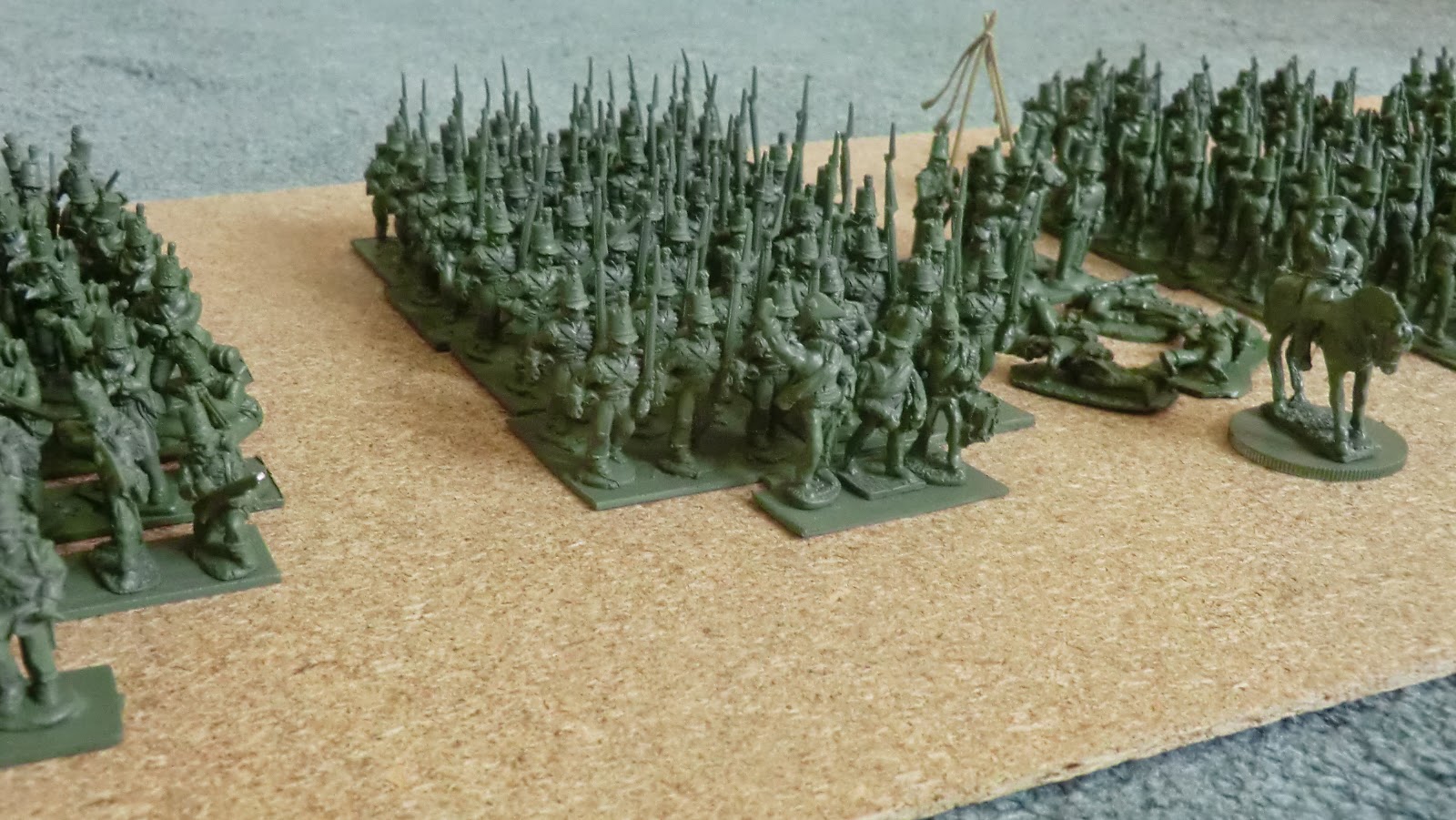 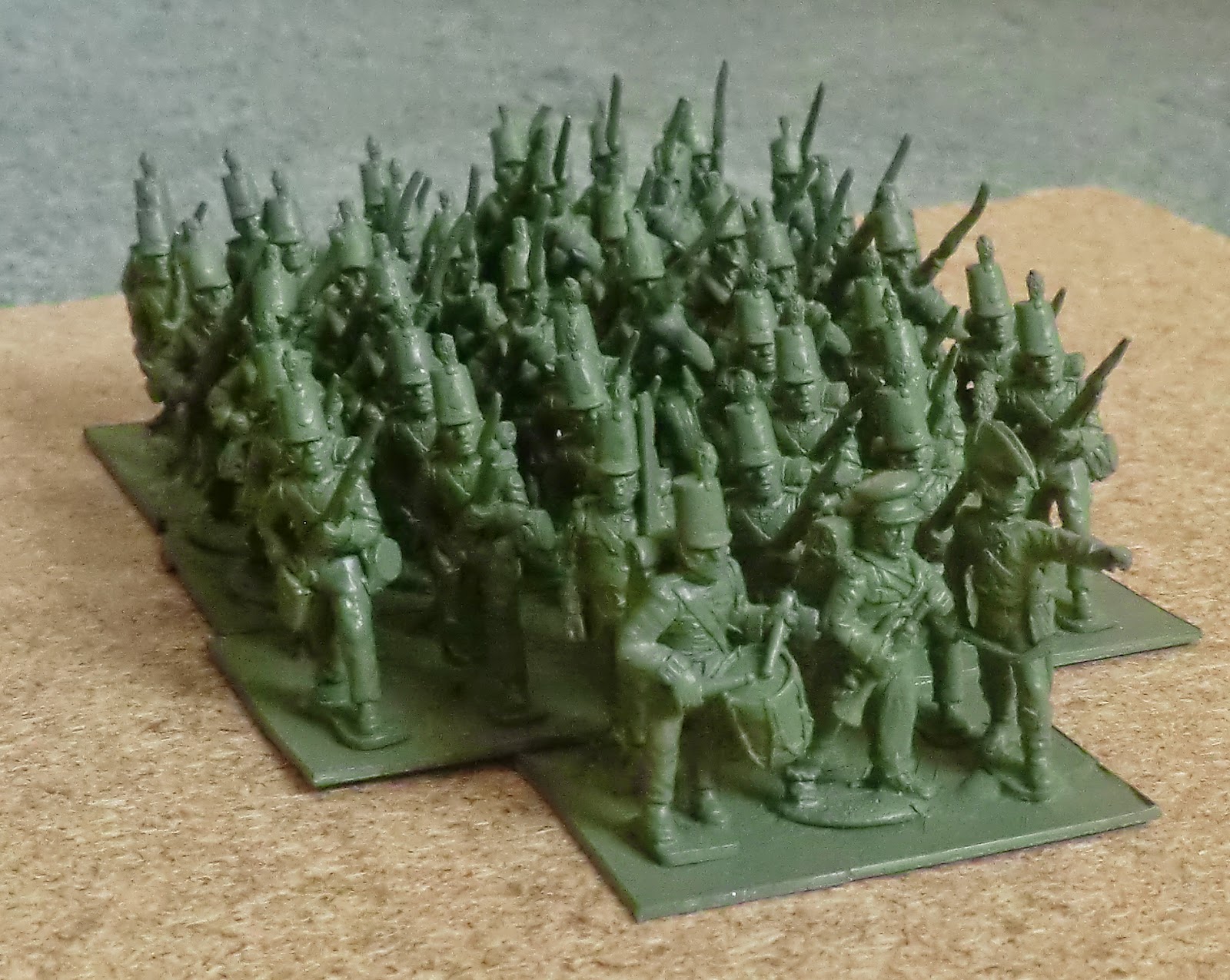 The unit is completed by a command stand of officers, musicians and colour bearers, and there is also a mounted Lieutenant Colonel, and four casualty markers. Our rules will allow for very varied sized units so I anticipate, on the day, this will be one  rifle-armed company of 44 figures, and a main battalion unit of 147 all ranks.

Now I've put these on the blog it's meant to spur me on to get them painted .....191 in one go is exciting yet scary. I've set myself a 3 month target for completion. Meanwhile if anyone has any reliable information on what the Luneburg colours looked like on 18th June 1815 please let me know, my colour bearers are waiting expectantly with bare poles ........(ummm, perhaps I should rephrase that!!)

Not sure when I will be brave enough to show these again but next time I will try to say a little more about their role in our La Haye Sainte scenario and why I think they are worth all this effort.

If you haven't found it already James Fergusson's blog is worth a visit Napoleonic Wargames blog.