I set the scene in an earlier post quatre-bras-test-game-5-imminent, and thanks to all those who commented on it.  As I said it was to be a two day wargame held over the weekend of 13-14th May, and the size of it means that there were about 260 usable photos. So I will limit myself to reporting only the first day's play in one blog post.

To start off have a Map 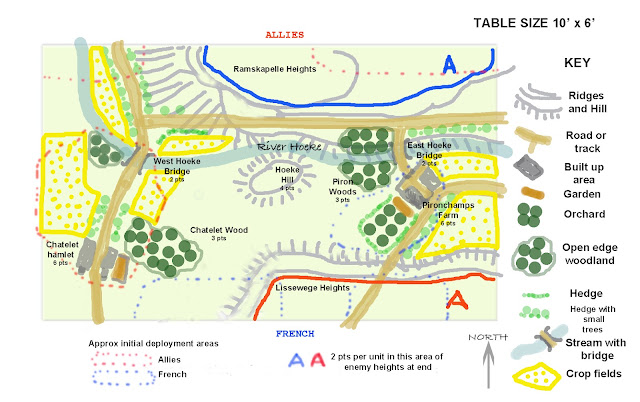 Objectives ad Deployment
I had devised and built the terrain but had left Kevin to think up a scenario for it. We didn't want the standard French attack a defensive Allied position so he gave each side a forward post in the BUAs - Chatelet hamlet and Pironchamps Farm. Victory points were allocated for locations as shown on the map, and, to encourage aggression, 2 points would be awarded at the end for every unit in the other side's "Area A". In addition 2 points could be gained for each enemy unit destroyed; we did not realise how crucial that would be for the outcome.
The blue and red dotted areas indicate very roughly where each side was allowed initial deployment. The map was divided up into 1 foot squares on the table which were labelled A-F and 1-10, and these were used to determine a phased arrival of reinforcements. Each  C-in-C had to make the decision two moves ahead of where reinforcements would arrive, but this could alter if the enemy was within 12" of the arrival point.
The full briefings and orders of battle for both sides can be found in the Napoleonic Downloads sidebar at right, with a link here

On Day one the players were:
Allies:
Richard Newcombe
James Fergusson
French:
Tony Dillon
Graham Ward
Umpires:
Eastern Half - Chris Gregg
Western Half - Kevin East
Apologies in advance that while my knowledge of events in the eastern half of the table are good, they are are a bit patchy for the western part.
The Initial Dispositions
Comparing with the map, and the briefs if they interest you, here is a photographic tour at the start 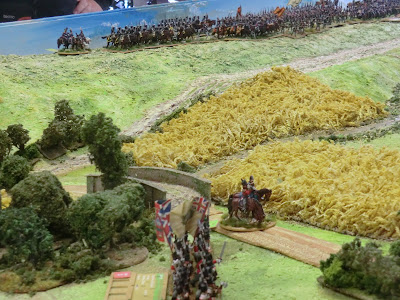 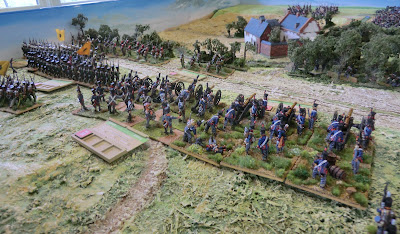 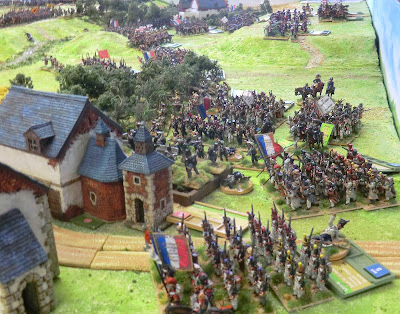 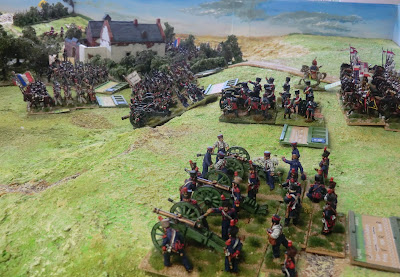 Both sides get Cavalry reinforcements 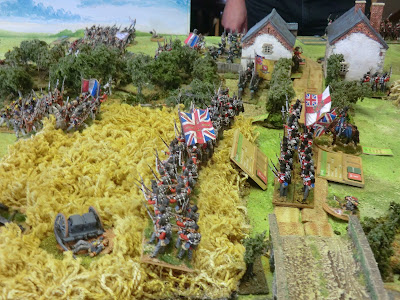 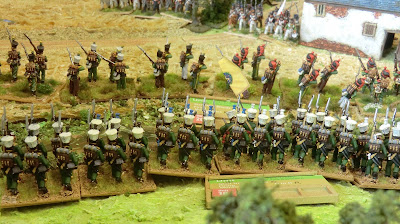 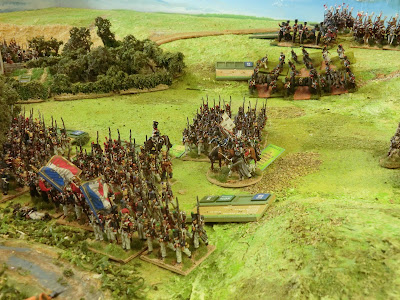 Some gains for the French on the Western flank 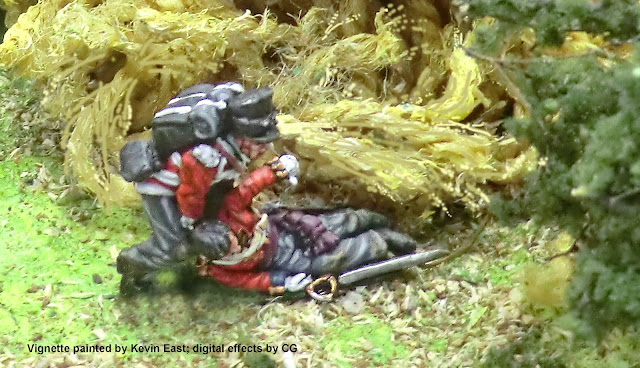 Cavalry action in the Centre

Even Honours on the Eastern flank

It was now 7pm and we had played 7 moves. It appeared  on all fronts, from the photographs, that the French had the upper hand, but this was illusory. Graham's near final act was to check Morale for his damaged battalions and the results were not good even with Jerome present, as we shall see in the next instalment of this thrilling tale!

Meanwhile the rest of us were off to the The Butchers Arms for dinner.