Just to finish off I must report on the second day of the weekend. The previous part is More on A Military Gentleman Forum 2016

I had anticipated that Graham Cummings would be fielding his 1740s period armies for a game (see Crann Tara Miniatures and links from it to Graham's blog) but he magnanimously gave way to others who had put a lot of effort into providing our entertainment.  So I asked Mark Dudley if I could participate in his refight of Chotusitz (1742) and he and Steve Metheringham treated us to an experience that was very different to my normal wargaming.  Again my photos are second rate but you can see better ones on their blogs Ilkley old school and Lace wars in tin.

The rules were Field of Battle - Piquet, and completely new to me. 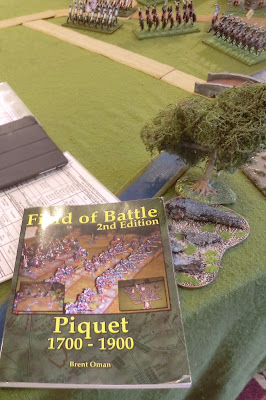 I fancied trying Prussians this time since I'd been on the receiving end of their manouvrability and fire power the previous day at Soor. Unfortunately, as many will know from Charles Grant's latest "Refighting History" volume 2 the Prussians were not starting in a happy situation.  A small infantry force was defending the village of Chotusitz and were hoping for relief by loads of cavalry on their left who had to channel across a bridge in between an uncrossable marsh and stream area. Also the Prussian main body, under Frederick, was forming up to their rear in a hollow, unseen by the attacking Austrians. On our right Dave Hall had charge of a Prussian cavalry force which had to fight with its back against Cirkwitz pond.  As can be seen from the general views an immense Austrian army was marching straight for us on all fronts! 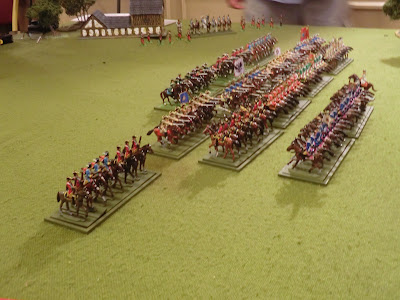 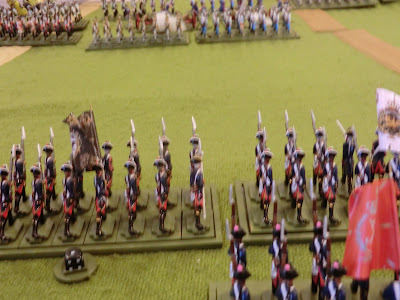 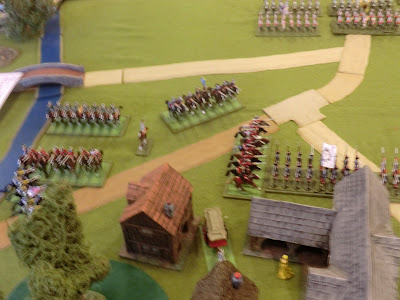 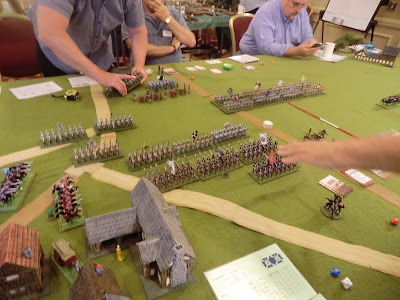 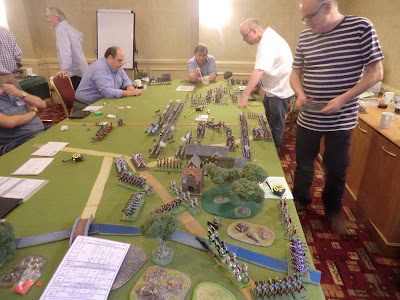 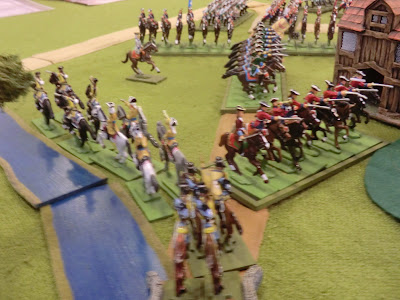 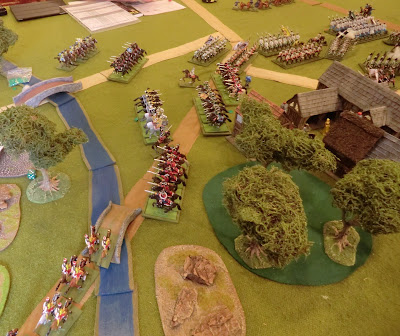 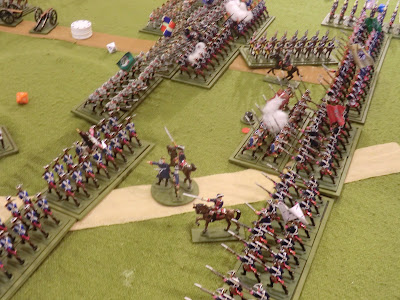 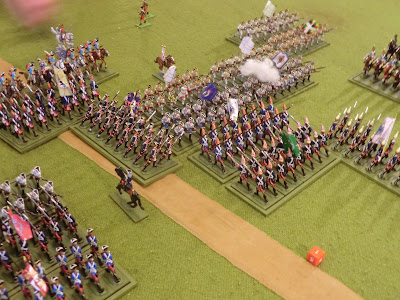 If this feels one sided to the reader then it certainly did to me and Dave! It's not that we were incompetent or didn't know what to do, but that the Piquet card and dice combination system mitigated against coherent tactics or a plan. Mark warned that the inconsistencies can be explained away as the "fog of war", which is true, but I believe all wargames need to allow the player a fair degree of control to exhibit some skill. For example a card allowed my cavalry to "move" but not manoeuvre (i.e. change formation). A dice off with Graham meant I scored a triple move so I could squeeze units across the bridge past his cavalry but not change formation and attack him. That of course left me very vulnerable next turn.

I daresay Field of Battle - Piquet is a great set of rules for a fun game in a relatively open and well balanced scenario, but it did not feel appropriate to me for the bottlenecks and local outnumbering of Chotusitz.  I don't tend to like card driven games much anyway and this had frequent dice duels attached to every action that one tried, even rallying, so often frustrating for both sides.

Rules aside I must take my hat off to Mark and Steve as they have revived the classic semi-round Prince August cast-your-own-army 40mm figures, and commissioned more to make a complete 18th Century army experience. They are presented beautifully with singles and small groups of figures on professional looking sabot bases. With basic, but lovely, terrain the whole thing was an old school atmosphere of which I've dreamed but never experienced, but with very new-school rules. Thank you both for the chance to try this out, and I'd recommend it to everyone for sheer spectacle and the satisfaction of handling those handsome blocks of figures.

Last but not least in the room was Paul Robinson's 28mm Great Northern War, Swedes versus Russians game. I'd have loved to try his too but, as I know nothing of that period I thought I'd have to place the more familiar War of the Austrian Succession and Colonial games above it in my priority list, sorry Paul. Just a few poor photos of what really was a splendid looking game and you really must read his blog - Grimsby wargaming  he's even put my balding head at the forefront of his first photo - must be a unique punishment for not participating in a game! 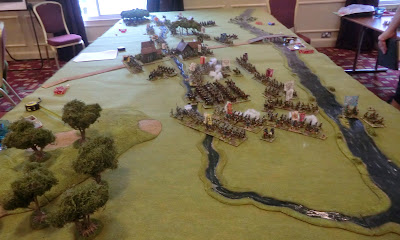 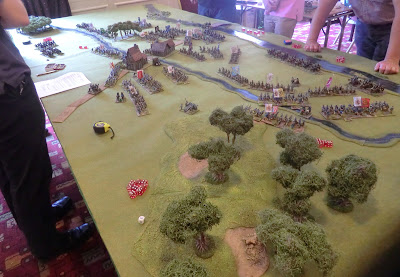 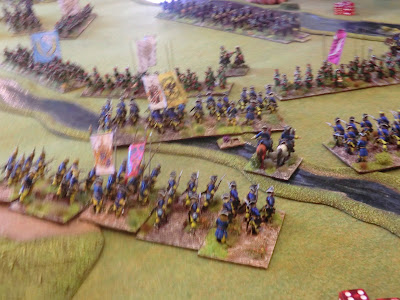 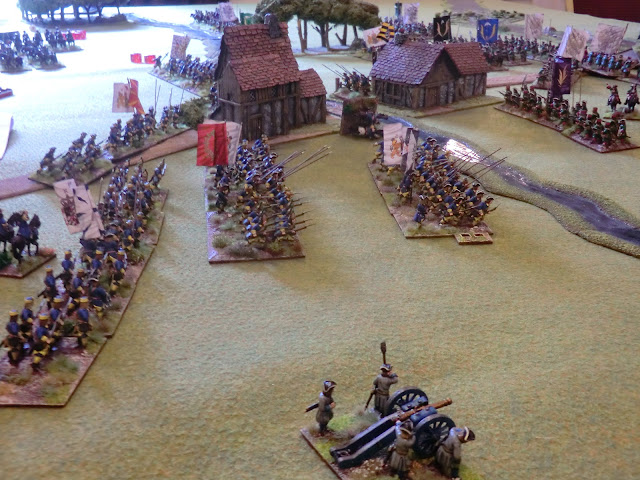 In Summary
John Ray published "A Military Gentleman, of the 18th Century" in 2013 and by early 2014 had opened up an online forum just for owners of the book.  The membership includes some of the most talented names in the more traditional styles of wargaming and model making and I'm incredibly privileged to be part of that, and to be able to view digitally what John, and many others, get up to in their studios and wargames rooms. This was the second AMG get together, and as I missed the first was my first opportunity to meet many of the people who had just been names and photos up to now. It was much better than a wargames show (though I haven't been to one since 2012 for various reasons) as all the participants were involved and it was in a lovely venue hired specially for us with meals and rooms within yards. There was a bring and buy with a trust the purchaser ethos, and I was happy to bring home some of Mark Allen's cast offs as well as two battalions of Fife and Drum Hessians from Graham! The company was good and the games spectacular, and arrangements are already being made for same time next year.

The spirit of AMG is hard to explain but we get so much out of it that I felt I wanted to give a little gift of my AMG-associated art work to participants, and evidently Will Harley felt the same as he gave us each a beautiful 28mm casualty marker on a counter base which will be used avidly in my next games of Honours of War.  Thanks to all involved for a great time. 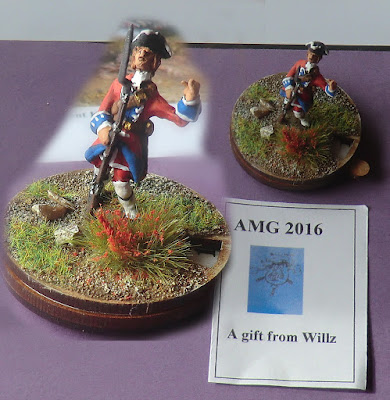 
No sooner had the smoke cleared at the Battle of Soor table around 3.30pm but I heard Dave Hall canvasing for players for the Sands of the Sudan game run by Dave Docherty.  I had wanted to play this so it was a carpe diem moment.  As before, the light seemed to interfere with my photos and the ones I show in no way give credit to the superb figures and terrain which was a lovely facsimile of the Peter Gilder style games of the 1980s, using the original rules and correct Hinchliffe (I presume) figures. I'm afraid I'm no expert on any of this but have played enough colonial games to know what to expect! And in this case it appeared to be realistic rules and units combined with a fun "tongue in cheek" scenario whereby a British column was speeding to the rescue of the General's daughter who was being protected by Dave H's Egyptian infantry against the marauding hordes of Mahdists. The key to action was that the umpire controlled the Mahdists and whenever you got near some cover there was a random card risk that it contained something hostile.


It appeared that the game had been in progress for 3 turns already and John D kindly suggested we split some of the infantry between us.  In the game I was in we had Angus taking all the glory with the cavalry, fellow Scot  John with the Black Watch, ex-submariner Will taking the Naval Brigade including Gardner gun, sailors and Royal Marines, and I brought up the rearguard consisting of the Royal Irish Fusiliers, camel borne screw gun, commanding general and war correspondents - no pressure then! I did not have the most distinguished game but will tell my small view of it  in what pictures are presentable. 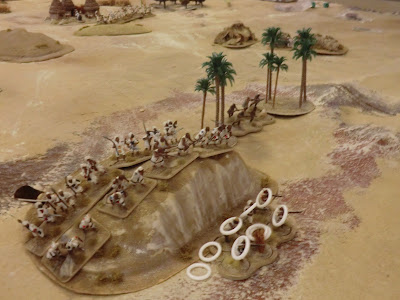 But just when I thought it was safe to recommence the march......... 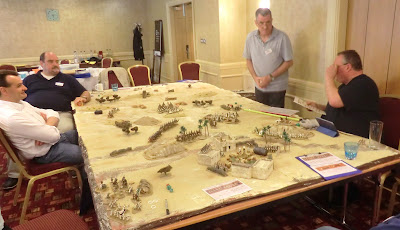 That proved to be the end of the game as, at the business end, Dave H had got short of ammo and, seeing the opportunity afforded by the Indian lancers decided to break out and make for them. Once the young lady and her companion were united with the Lancers we had won our objective. Great fun, and thank you Dave D for giving me the chance to participate in something the like of which I had seen in magazines in the past, and recently on the web but now it felt real.
AMENDMENT: The rules have been resurrected by Carlo in Australia who can be contacted by email  here - carlo pagano and his highly entertaining blog is
with pyjamas through the dessert

We finished about 6pm and there was time to chill out before evening drinks on the patio followed by a lovely meal, then more drinks and conversation in the bar till.....about 1 am (but don't tell the Duchess!)