A neat idea for casualty markers

I know this is a subject that has been covered a lot over the years but I just wanted to add my two-penn'th now I've made my own discovery of these neat things from Warbases:. 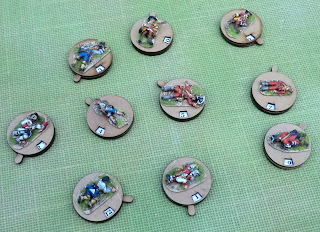 Please read my story, but if you are in a  hurry scroll down to the bottom for the really useful info.

Old style casualty markers
It has been a thorny subject for me in the past. Can I give you an excerpt from an article I wrote about 7 or 8 years ago in our "Greatfield Galloper" club magazine following a trip to see an old friend in London.

"I had the Austrians and Russians against my friend's French in a fictitious 1813 contest at Schewidnitz.  We started off in the evening with advance guards of mixed arms just trying to claim some territory. I opened up with a horse gun and knocked off a couple of infantry figures. Since they are on bases of 3, before I realised what was happening my host had nonchalantly slung  white curtain rings over the heads of 2 of the figures. Stepping back in horror I exclaimed “If you insist on using lifebelts - I’m leaving!”
Why? Because I’d just been admiring his large wargames table with many nice terrain pieces, and his vast armies of realistically painted miniatures were just awaiting our loving fingers, so why spoil it with something ugly and anachronistic like a white plastic ring round the neck that looked as if it was intended to help him ford a river.  OK, so it was a hollow threat on my part - how was I going to get 100  miles home at that time of night, anyway?  But I’d struck a small blow for freedom, and since we had little choice but to use them, the plastic rings were laid down behind the battle lines and at least I didn’t have any photos of French grenadiers struggling with lifebelts"

Here is one photo of the game showing those rings, but happily not round the necks of the figures. 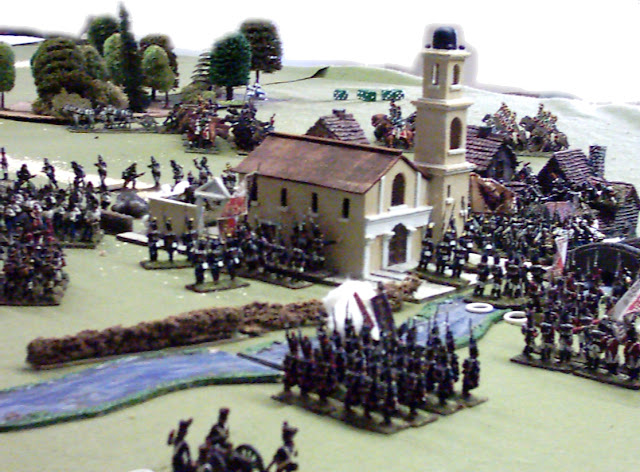 Avoiding casualty markers
For my own games with 28mm figures, which at that time was just French and Indian War, it made sense to have "old school" style individual figures so casualty removal was no problem. Later, when I moved "up" to Seven Years War Imagi-Nations in Europe, the more formal style needed 3 figure bases but I accommodated casualties by the tried and trusted method of having some figures as ones and twos in the units. Most often these were the command figures, mounted on coin or washer bases for stability. But soon I found that my growing numbers of units were proving a trial for some in my group who were self-confessed gamers not history or uniform buffs, and I needed to avoid units getting mixed and in particular the supernumeries going astray. In one game I found that the blue coated drummers from a redcoat regiment but in reverse facing colours, were helping to man a battery with their blue-coated, red cuffed Royal Artillery colleagues!

But facing the inevitable eventually......
So I moved to standardising the regular units at either 24, 36 or 48 figures and mounting all figures in threes. Then of course I needed some casualty markers for when less than three hits were scored. I devised my own using a large unit number marker on a stand with a space either side for a coloured bead. They were difficult to make and a bit ugly. Here's one in a game last August 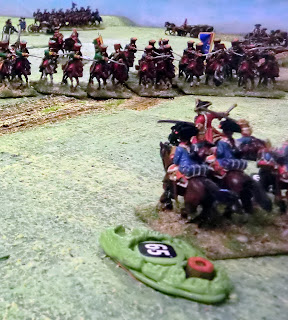 About that time Kevin East came back into my life (see the sidebar guest pages for pictures of his wonderful figures) and he showed me a few circular markers with a casualty figure or two mounted and with a moveable dial allowing up to 5 casualties for his 6-figure stands. Here's an example, with two figures on it, just about to fall into a chasm caused by my ill-fitting terrain tiles!: 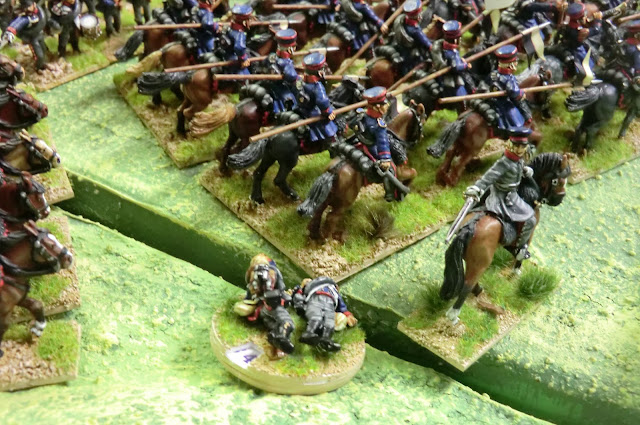 Into the 21st century......
Kevin made them himself from MDF but it was a lot of work. Now recently he has told me that Warbases were making something even better.
I had a look on the web, and with my friend's recommendation in mind, bought some samples which I'm so delighted with I wanted to show them to the world!
See the top photo for my set, and all these photos below show more detail. 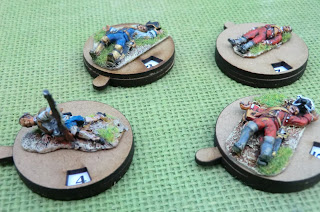 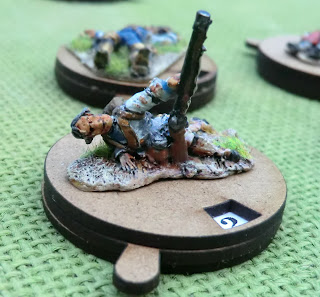 There are two designs, with and without the sticking out turning handle 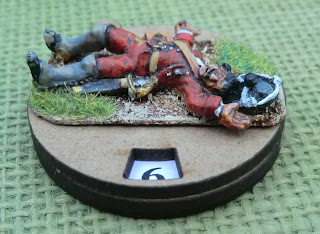 I was so impressed I've gone to the next level now and begun to rebase my units in groups of 6 just so I can use more of these :-)  (but really to speed the games and help the occularly challenged players) . 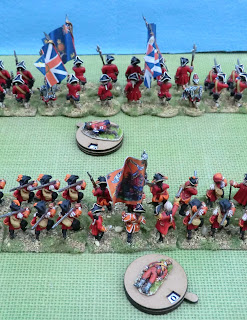 These are 48 figure units but designed to make 24 figure units should I need them. So just one casualty marker behind the command stand. The firing unit is on "5" and then I've imagined they get one more casualty and remove a whole base to reset the marker to "0" in the picture below. The unit behind sees the fire is too hot and marches off while they still have "0" on theirs! 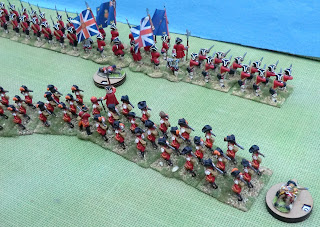 This one is a digression with a gratuitous photo to justify my Imagi-Nation silliness. 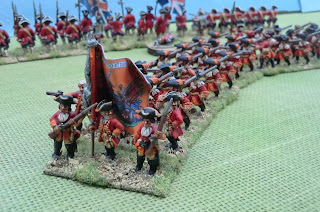 Sharper eyed viewers will see most of these chaps are wearing Malburian period uniforms. I saw them cheap in a bits box at a Show and could not resist a bargain, especially as there were enough  for a big battalion. I like to imagine a Germanic province in my 1760 State of Reikland  having some militia in old fashioned, cast off, uniforms with a sort of Home Guard command group of higher class part timers, eccentrics, and ex regulars (think of an 18th Century Captain Mainwaring, Sergeant Wilson, Corporal Jones, Private Pike, etc!). I've painted them in a Hanoverian-inspired colour scheme with a historical Hanoverian flag. The rank and file are, I think, Parkfield Miniatures, with the command group taken from my odds and sods box of SYW Foundry Russians and Prussians, Front Rank Prussians and an Old Glory French drummer.

Just for balance here are some French in 24 figure units. Mostly miniatures by Redoubt Enterprises and Old Glory. 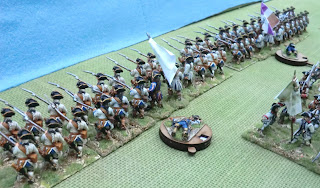 My casualty markers were made by just sticking on casualty figures I already had which were used as Morale check markers, so the MDF tops of the bases still show. I'm thinking that keeping some clear space gives me more options for the future, such as adding small counters or stickers to indicate Regt, Brigade or Wing command structure as the games grow in numbers of units. They could, instead,  be landscaped or textured right up to the edge.  Of course a unit in good order need not have a marker, and putting one down showing "0" might indicate a morale check for non-casualty reasons. I've got a bit of thinking to do on that one. 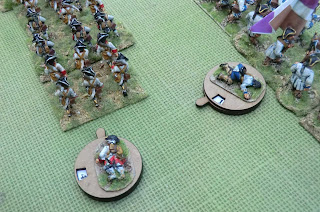 The permutations are as varied as wargame rule writers but I can think of a few systems that might find these useful, not least "Black Powder" or maybe even Principles of War, and In the Grand Manner, or any Old School style game like my own "Wigs and Wine" that scores casualties in figures but needs multiple bases.

Enough waffling, now how can you get some?

Here is a link to the Warbases relevant webpage  gaming aids
You can see they are only 60 pence each and unless your armies are huge you won't need to break the bank for a neat solution to those horrible curtain rings or coloured pipe cleaners. Much cheaper than 3 to 6 actual casualty figures for Black Powder "hits" since you only need one of these for any size unit. The numbers can be customized if 0 to 12 doesn't suit you.

Martin Murray of Warbases has also told me  "We have a lot of demand for a smaller version that would be suitable for a variety of games and so we will soon be launching a 30mm diameter version, numbered 1 - 12."

I hasten to add I don't have any commercial link to Warbases and have only just discovered them myself, but while you are there have a look at all their other movement trays and tokens and some of their very useful items of laser cut scenic accessories, which are time saving if you make your own buildings, as I do.

I hope you've found this posting of some use, please Comment if you have, and if you order some from Warbases please tell them you read about it here (though I'm not on commission!).