This is just a quickie to announce that Kevin East has just supplied me with another batch of photos of his superbly painted Waterloo period 28mm figures. This time Allied Infantry, and Artillery from Britain, Prussia and France.  Some of the photos are very artistic and worth your time perusing.

Email ThisBlogThis!Share to TwitterShare to FacebookShare to Pinterest
Labels: Waterloo

Apologies for the lack of activity...and a new guest

I'm ashamed to say I have not blogged anything since mid April for a variety of reasons. My last post featured updates to my 18th Century rules "Wigs and Wine" and trailed a big game I was having the following weekend.  Well, the game took place and I'm glad to say all involved (including me as umpire), enjoyed it. The rules worked pretty well and only needed a few more amendments. However, the prospect of writing it up and organising the photos for blogging, with captions, was a daunting prospect and then real life just seemed to home in on me....
I had an art exhibition to prepare for at the beginning of May,...... a whole 9ft x 5ft desert terrain to make for a World War Two game here at the Chateau de Grandchamp in June..... an unexpected landscape and race horse painting commission with a short deadline which found me jostling with Olympic Torch crowds at Cheltenham Racecourse ...then holidays in Scotland and in Germany in June .....a major exhibition in Cheltenham in July...and, just for a rest, the following three weeks painting about 150 miniatures for another 18th century "mini-campaign" weekend in mid August (while the Duchess watched the Olympics!)

I fully intend to report on the two big Imagi-Nation wargaming events at some stage but smaller posts are easier to handle, and my life isn't slowing down as the ever imaginative Ian Allen has commissioned a big  and complicated painting for his "Chronicles of Umpopoland" stories....oh....and I've got an order for a Japanese watchtower and some more peasant buildings in the next two weeks too.
Better give you a photo before I blather on more. This shows one of my  scratch built edifices acting as a temple in Paul's latest 16th Century Japanese game, complete with ceremonial arches in the background. 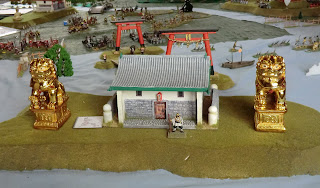 Leading such an interesting life obviously gives me a lot to write about if only I could find the time and the next posts will cater for the "light blue" fans, and the "Hussarette" enthusiasts, as the stats suggest those are the most popular posts after the wargame reports. Some other things I could  feature are:
- a how-to with photos on making terrain tiles and hills (green and desert)
- more features on my new 18th century units
- a report on my visit to Remagen Bridge Museum on the River Rhine
- some photos of the Medieval walled German towns of  Oberwesel and Ahrweiler
Please let me know if any of this is of interest. Here is a sample:
New guest gallery
And finally I need to introduce a new guest, Kevin East.  Kevin saw some of my Hussarettes on exhibition in Cheltenham, recognized that only his old wargaming friend CG could do something so quirky, and got in touch after a 37 year absence! Once the shock had subsided for me I found out that Kevin had been without wargaming in his life for over 30 years of that time but a change of circumstances had led him to unearth his 1970s Mini-Figs and then replace them for modern 28mm Napoleonic figures.  In the 70s, as a lad, Kevin was a very talented painter of 2 Dimensional soldiers and also wild animals and he went on to a career in animation and related art and media activities.  When he showed me photos of his recently painted figures, and we had a good catch-up chat  I was overwhelmed by their quality and his enthusiasm and wanted to share them with my readers. So please have a click on the new tab above - Kevin East Guest Gallery and feel free to give your comments or email Kevin as he starts out once again on the great adventure that is wargaming.
Posted by Chris Gregg at 23:43 No comments: