Kevin East continues to turn out superbly painted figures at an astonishing rate. For those not familiar with our mad aims please see this link to the previous part waterloo-project-treble-top-180 and all the others with the Label "Waterloo".

He has now produced two line battalions as well as the light infantry battalion featured earlier. Here is a photo of the whole lot. 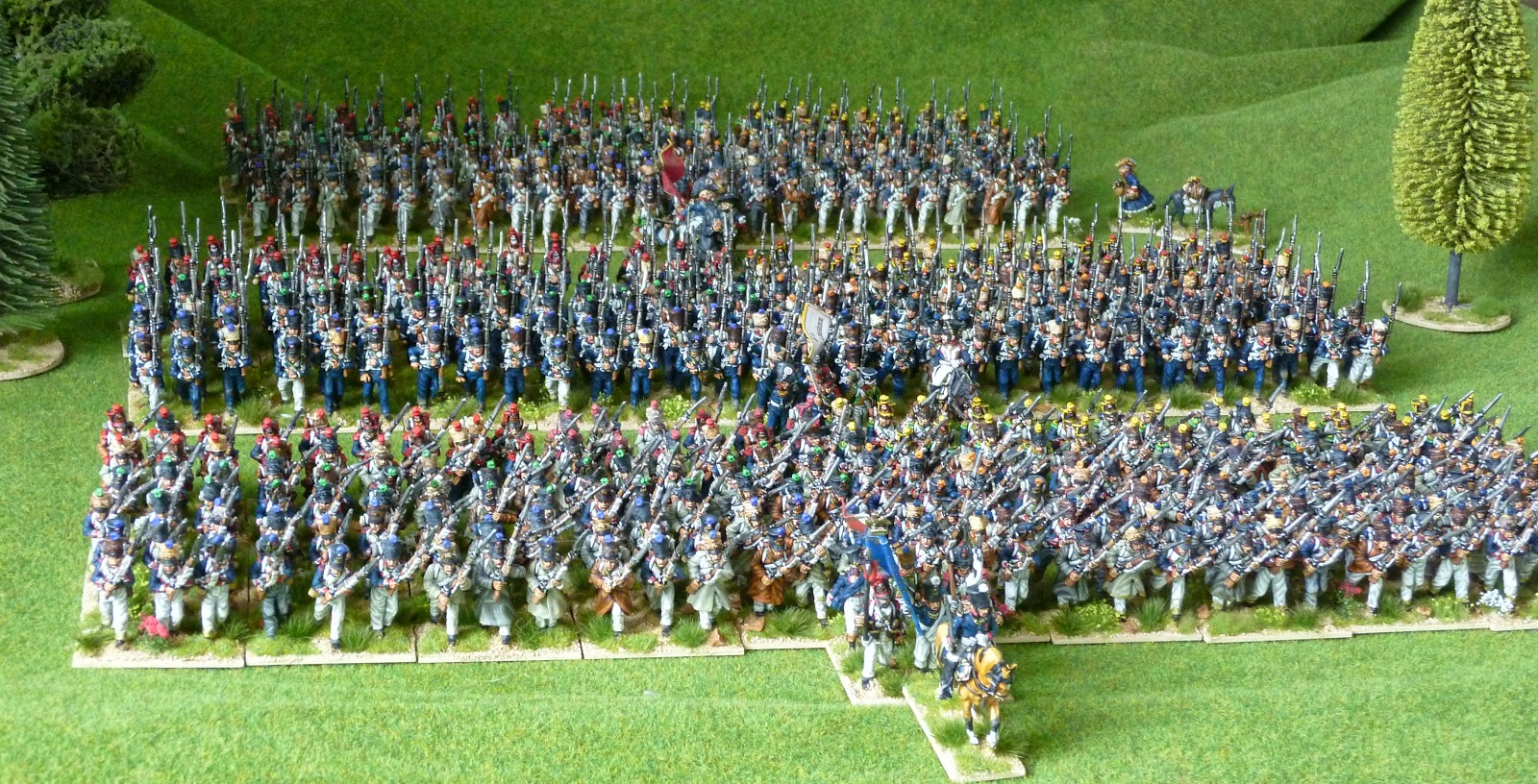 And here are Kevin's own words


"Here, hot off the painting blocks are a few details of the latest French battalion along with the other two already completed at 1:3 ratio.  This would represent a standard three battalion regiment in the field if they were all the same type, or a two battalion regiment and an attached light battalion making a brigade. In this case a total of 510 figures. 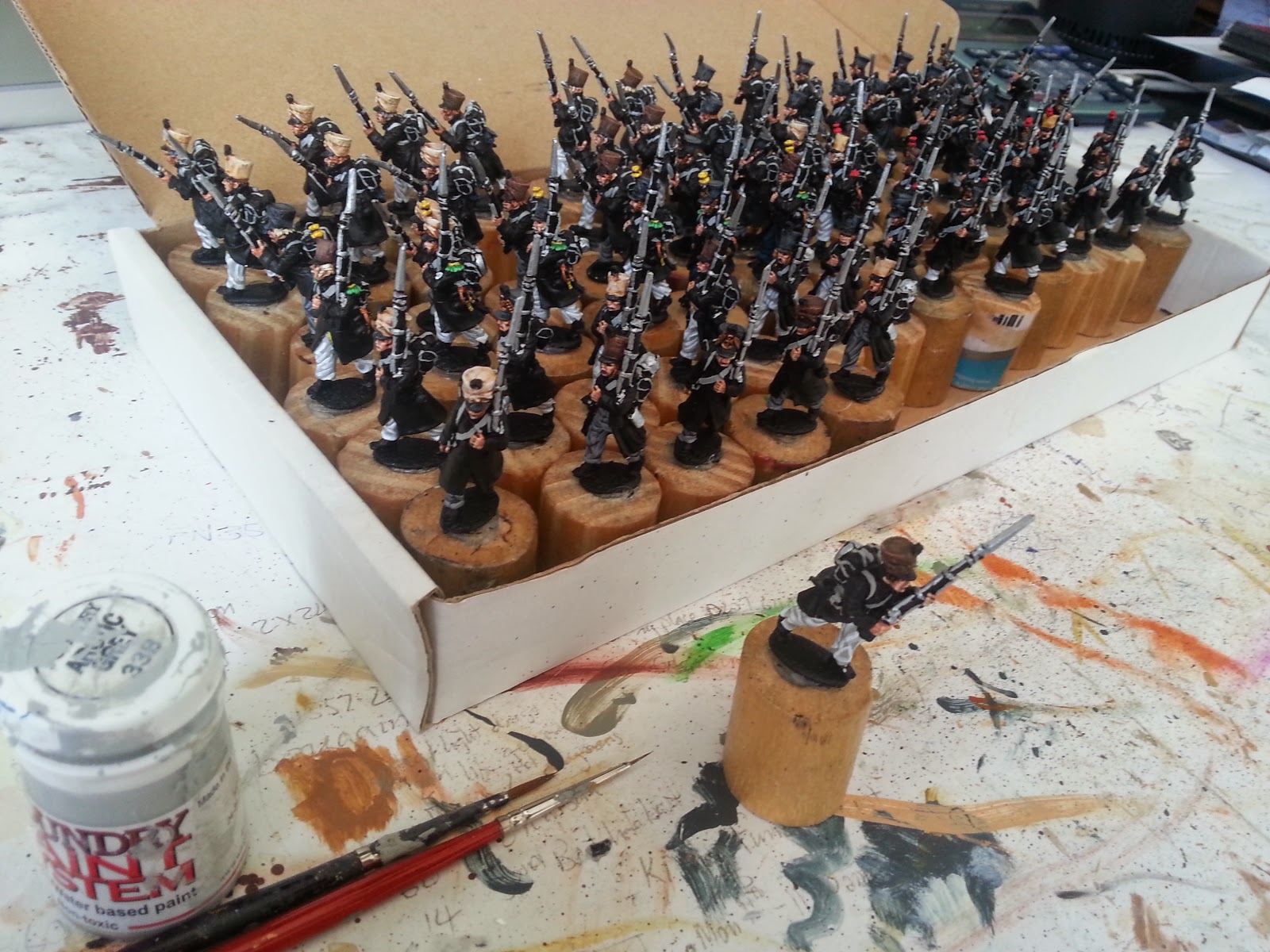 "According to the painting spreadsheet we have for our games, which commence in June 2015, I have just one further 150 French battalion to complete my total of ‘Frenchies’. I am part way there already and should have those ready in a further 6 weeks or so. Of course, I am then onto the 250 Nassau infantry and British guards which should keep me busy for at least 4-5 months! 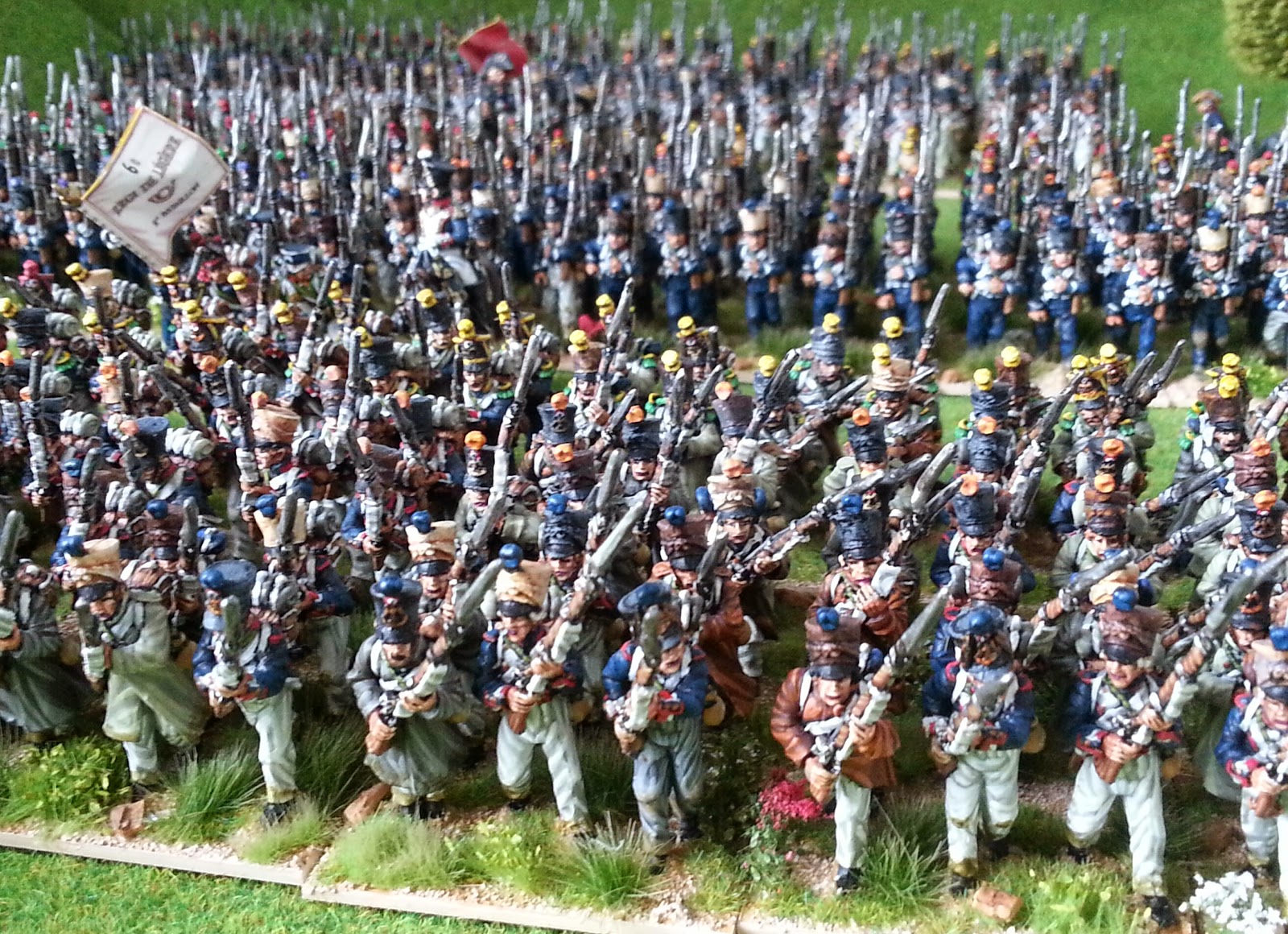 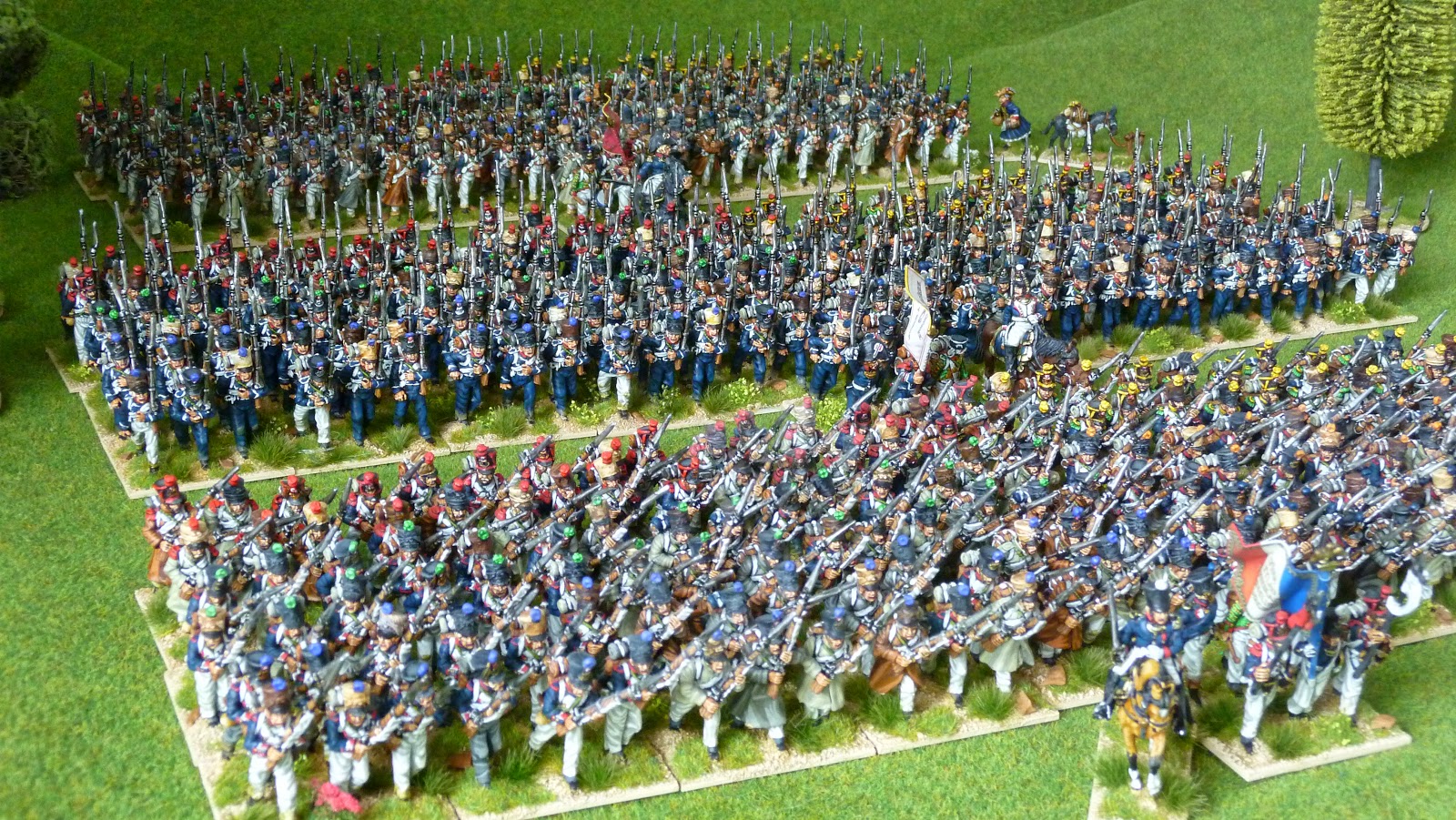 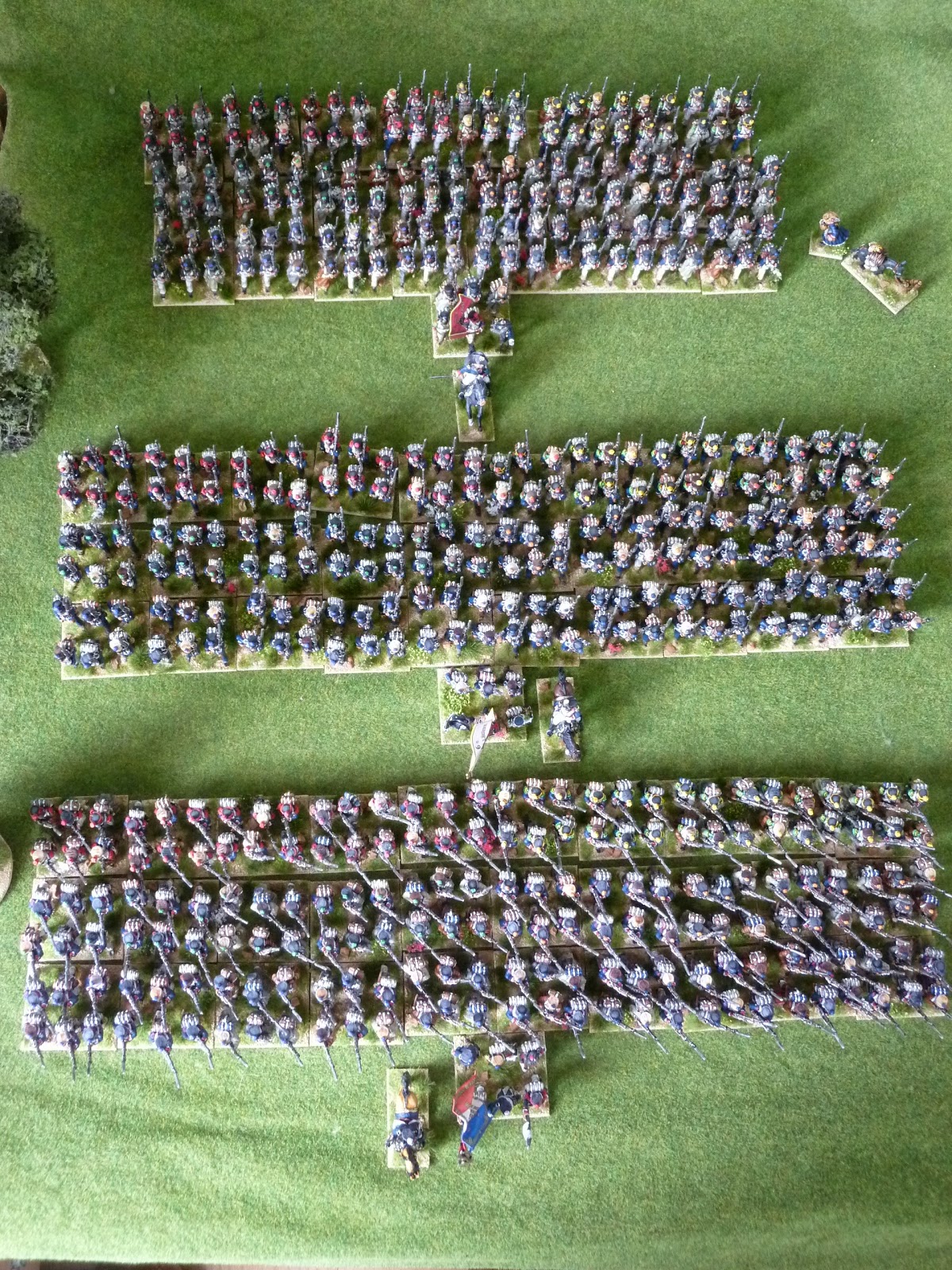 "I have the joy of painting Napoleon’s carriage (which I have from Warlord Games) as a reward for completing all my painting for the games.

Hope you like the photos. Happy viewing!
All the best, Kevin"

Well I certainly have Kevin.
And here are more showing his detailed and artistic approach 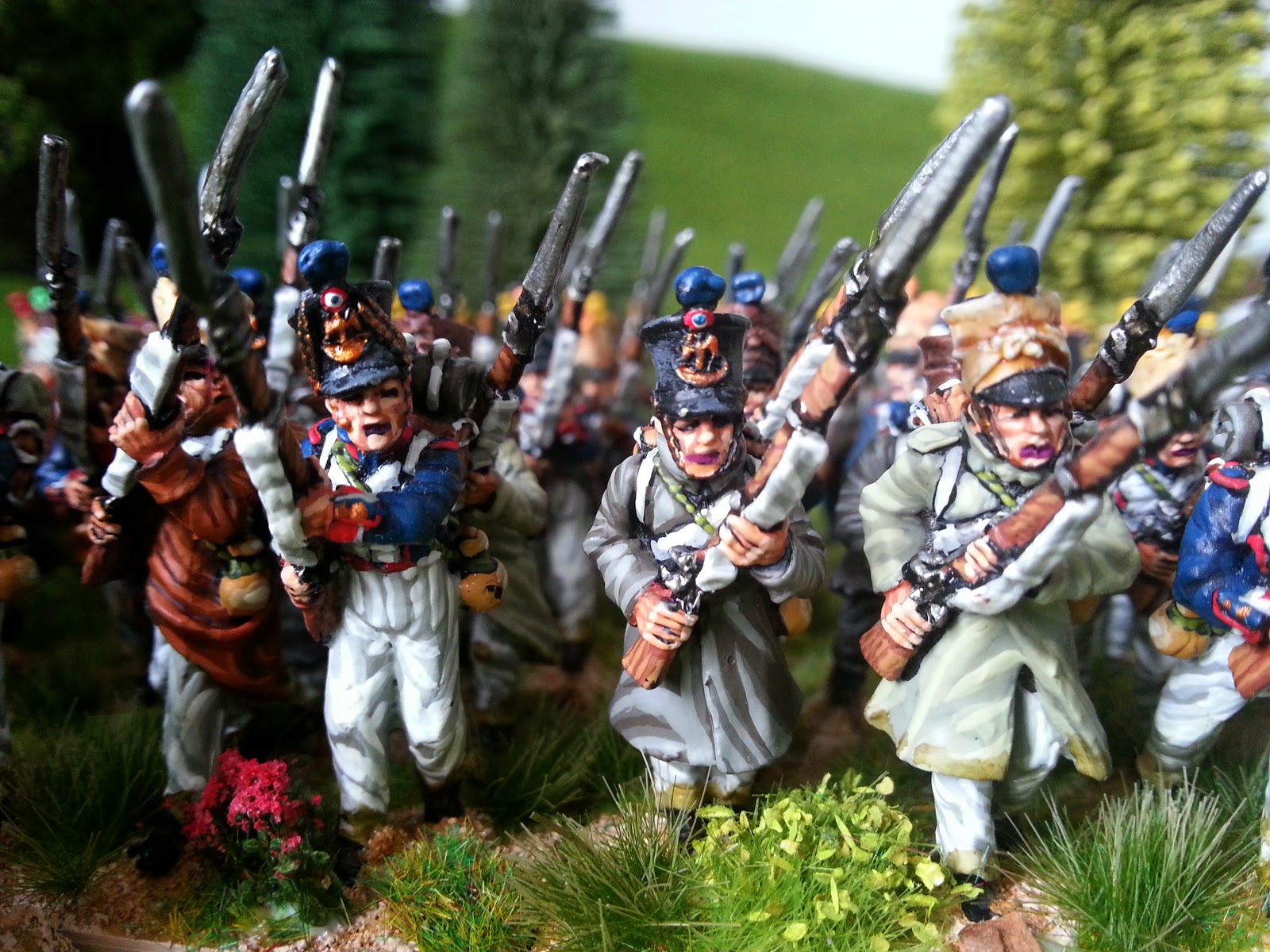 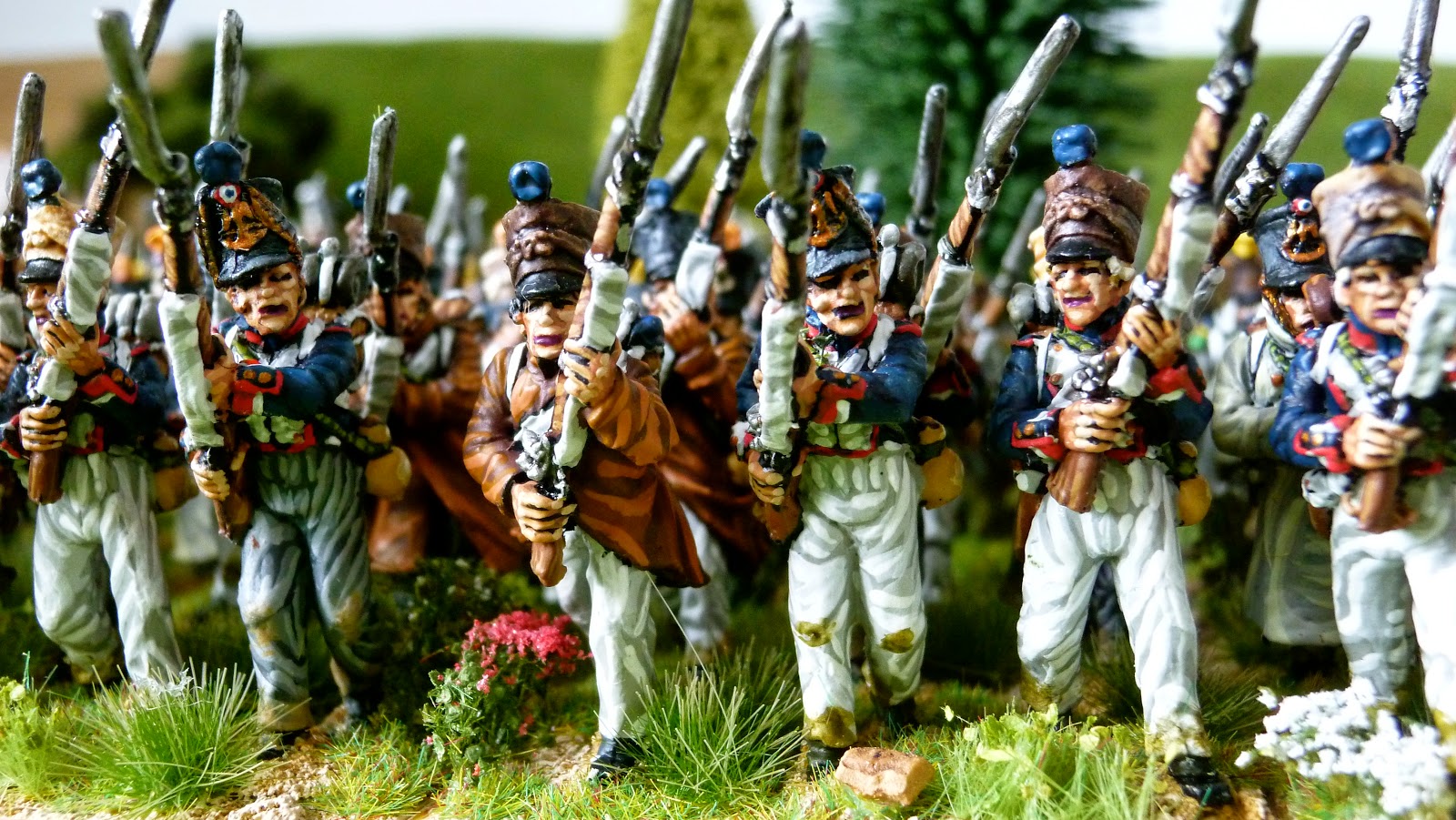 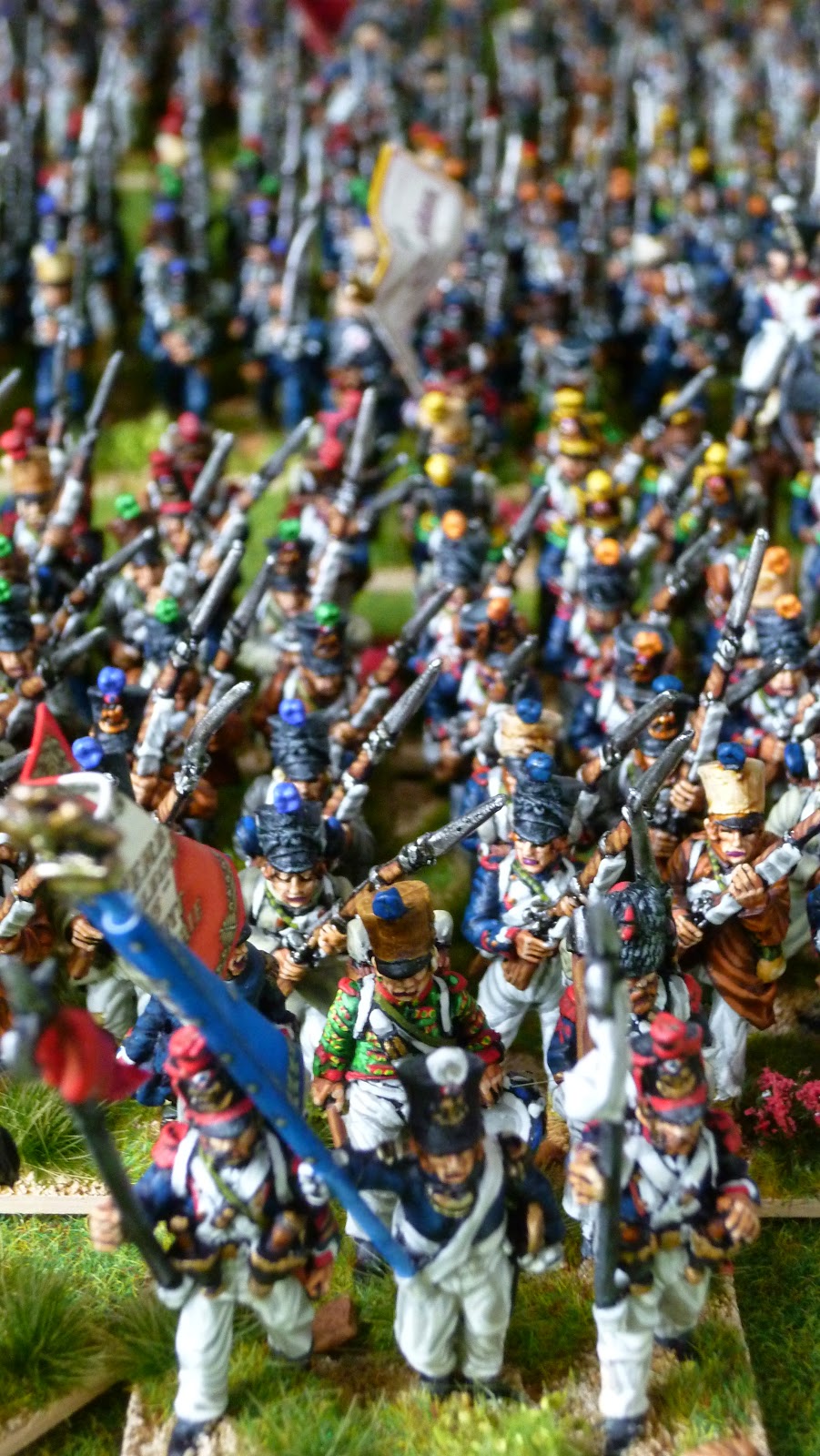 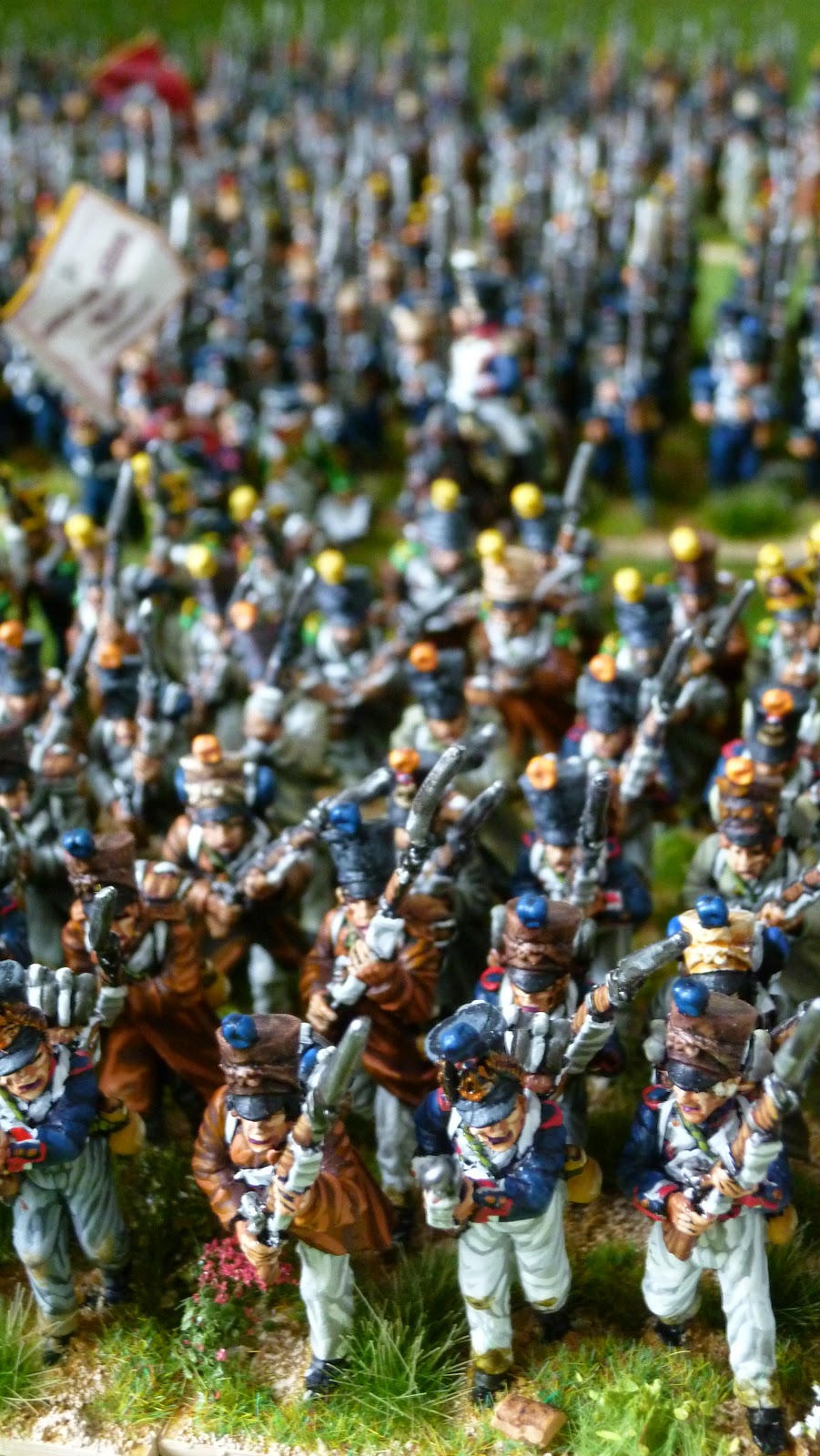 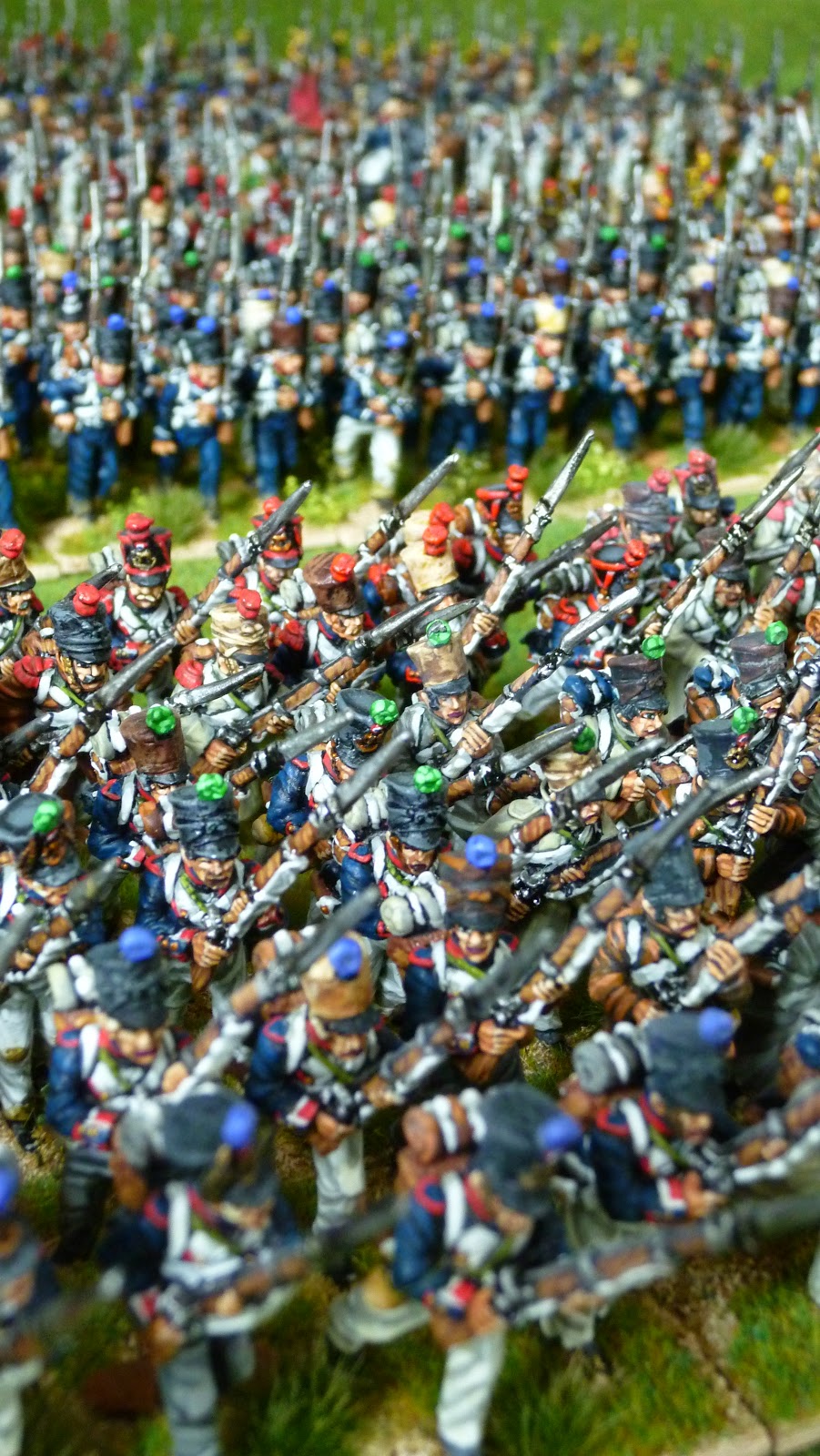 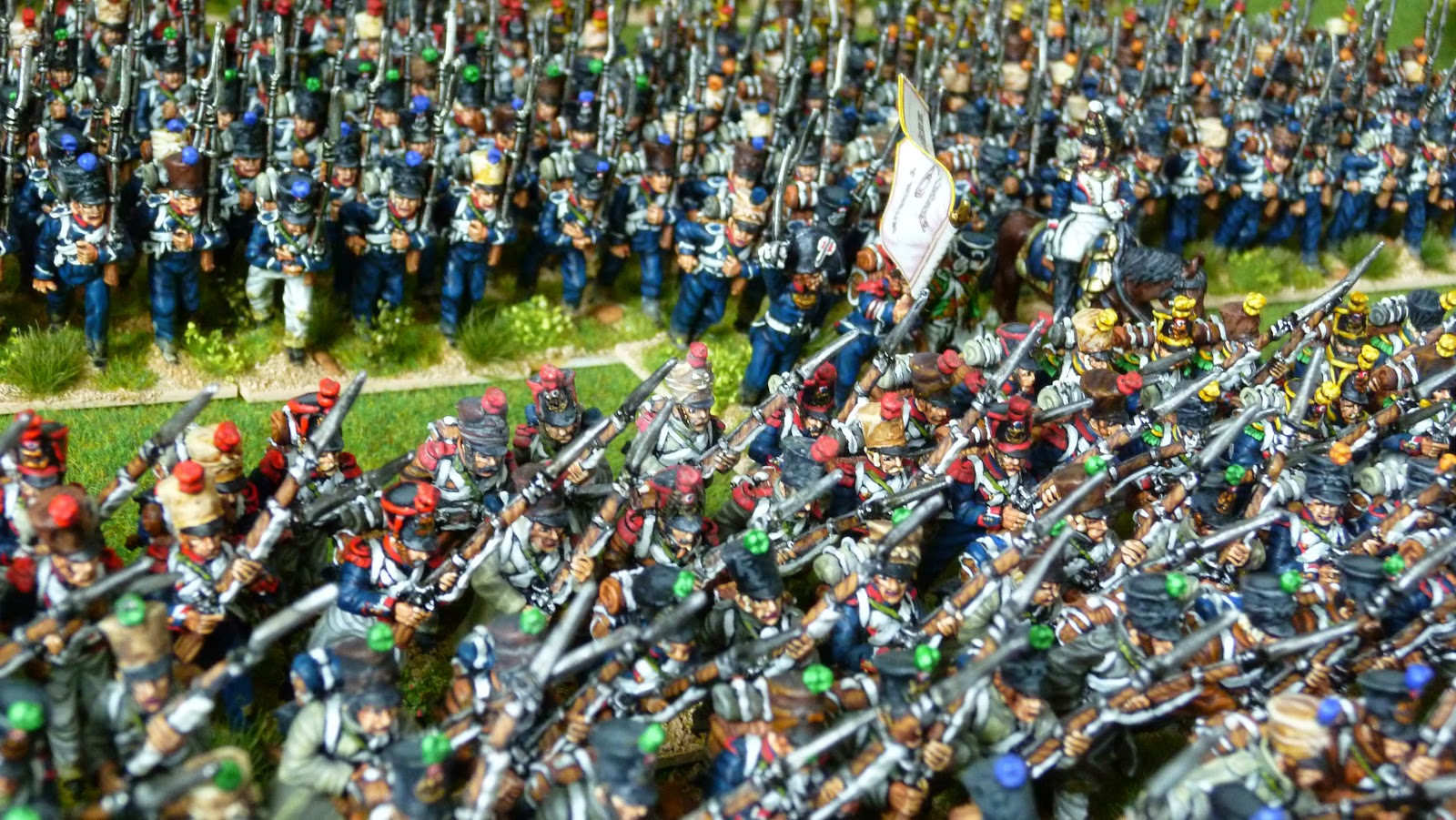 I have to do a Light Battalion myself and I think Paul has enough to lend three more French battalions to the 1:3 cause. All of us (6 participants) are making up battalions and squadrons for the Allies too, more of which later.

Meanwhile....this time next week Kevin and I will be on a two day guided tour of the Waterloo campaign battlefields so I hope I'll come back with something suitably inspiring to report.

You might have thought that I was using a journalistic ploy in leaving the previous part of this After Action Report hanging.......but actually I find that the longer the blog post and the more photos, the more unreliable the technology gets. You can see from the final skewed photo caption that the jeopardy was not in the wargame as much as in the author's worry if he would lose the report!

It was about this time that the Russian 124th Rifle Brigade suffered its 20th casualty and needed a morale check. They got "No offensive action" so just ground to a halt, firing back where they could. frankly they had lasted longer than I expected, partly due to a run of below average dice rolls by Mark early in the game.


And what about that Morale check for the T34 company? I ended up with a '0' for them and they retreated two moves which coincided with the late arrival of the Stuka support. Oberst Freimann had earlier got his Air Link half track in a commanding position on Razguelaevka Railway bridge, received a radio message from the CO 517th about the tanks on the flank and ordered the air support to deal with them. Mark's first bombing run missed, but he still had two more chances to damage the fleeing tanks.

Conclusion
We had played for about 5 hours, obviously slowed by explaining procedures to a newcomer, but still lots of units hardly yet in action. Time had to be called and the two adverse Morale checks for my Russians made it an easy decision to declare Mark the winner of his first wargame. While his infantry in the station were nearing  a critical strength, he had good hard cover and supports and was unlikely to fail morale. The tanks and Panzer Grenadiers and Elite Assault Engineers were well placed to sweep through and destroy the ill equipped infantry battalions facing them in the open. I thoroughly enjoyed it and Mark felt a lot of the time as though he was going to fail, so it was an exciting and successful game. In my view the change of scale had worked a treat, giving plenty of scope for manoeuvre yet with some long range fire. Keeping the movement distances the same maintained the momentum of the game and allowed both sides to get to close quarters when it mattered.  I'm going to need two to three times this amount of models and a lot more ruins when I host a game for the whole group in November, but I'm now quietly optimistic.

Meanwhile....back to the Waterloo madness! 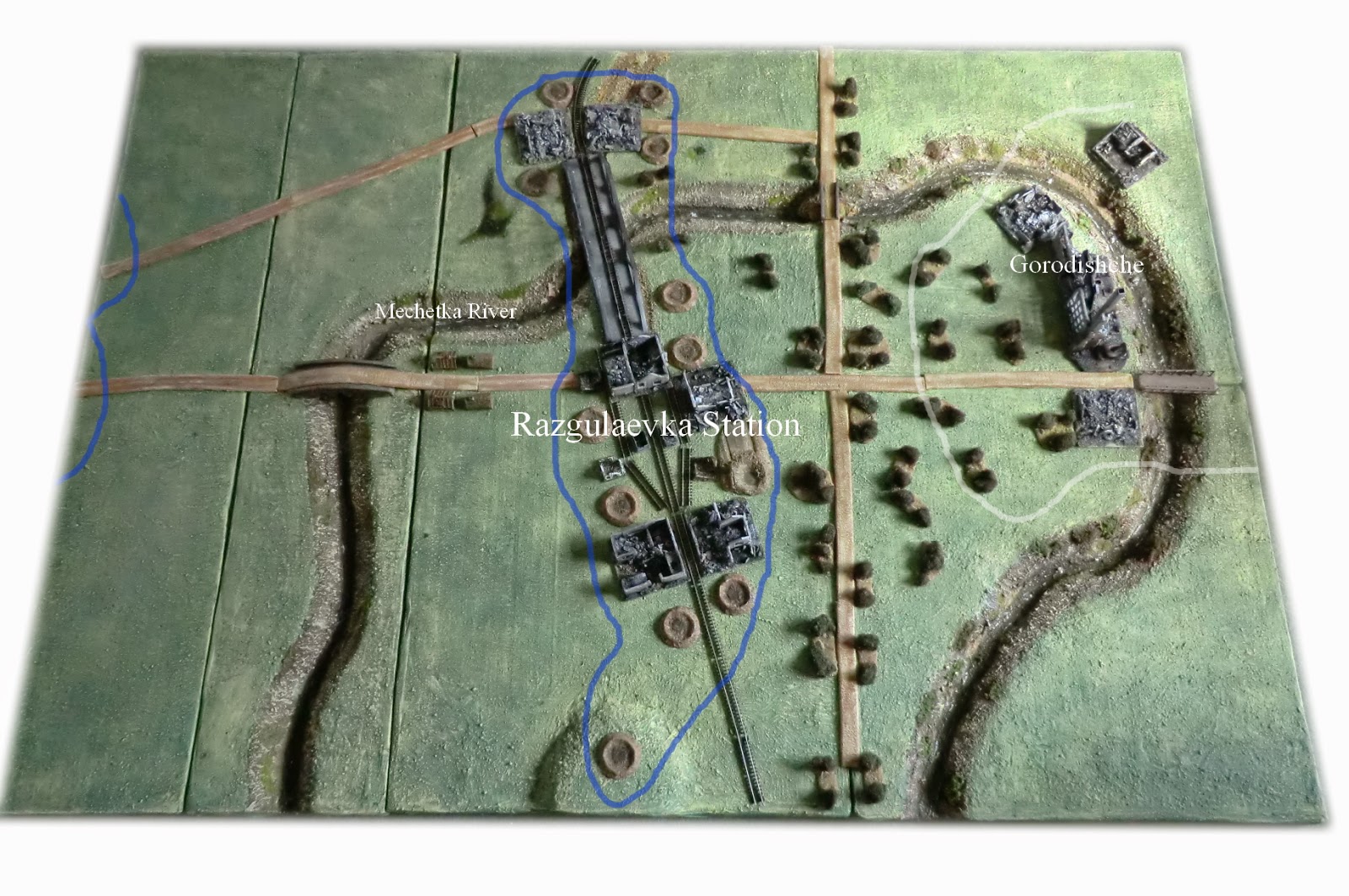 Mark's Germans were deployed within the blue lined area with 1st Bn 517th Infantry dug into the Razgulaevka station area supported by infantry guns. The Engineer company had reinforced the bridgehead and deployed in the ruins at the western end.  All the remaining forces of the Kampfgruppe would arrive from moves 2, 3 and 4 at the Southern baseline. (See this link for a PDF of Orders of Battle and Objectives)

The very much depleted Russian 124th Rifle Brigade, grouped  as one tactical unit of 54 figures, was deployed within the grey lined area in the scrub South of Gorodishche. A field gun and mortar in the town would support them using the NKVD officer as observer on an upper floor of the Mill. 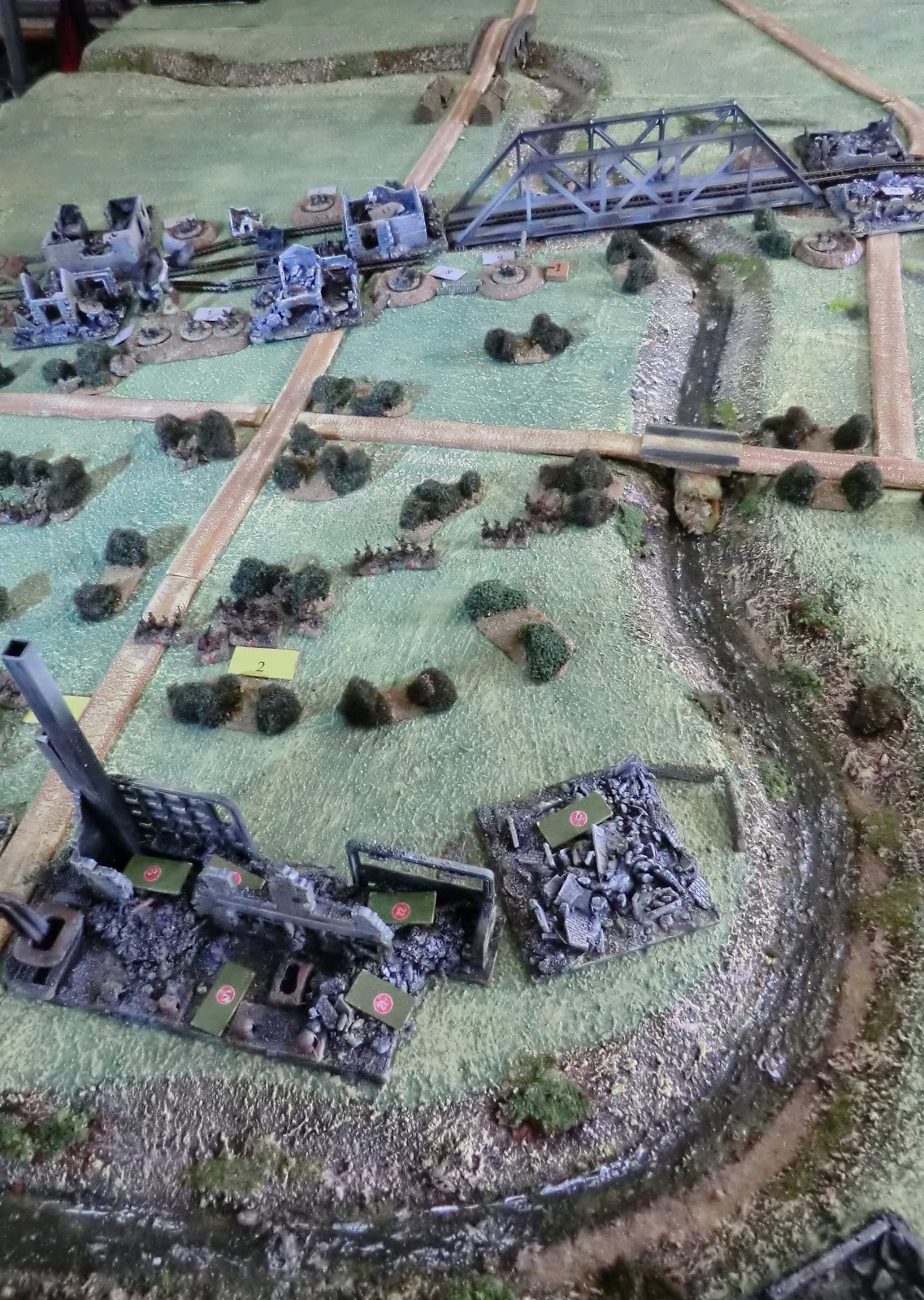 The above photos show the progress of  light and medium companies of 6th Guards Tank Brigade. Each has a company of SMG armed tank riders on board. As the T60 and T70 approached the Mechetka one was destroyed by fire from the 150mm infantry gun on the facing hilltop and some of the riders were also lost. Subsequent morale test was "No offensive action" and basically this force did not achieve much more. The company of T34s crossed the river further back and headed menacingly towards the station, using their machine guns with some effect on the German infantry. Despite this small success Mark was now looking with worry at his threatened flank.

At this point my excitement in the attack must have got the better of me as I completely forgot to photograph some best bits. The remains of the Russian 124th launched close assaults on the station buildings and registered some success on the left, pushing Germans back across the railway lines, but being stalled in the centre. Mark had skilfully brought his 75mm AT gun up to face the T34s but was thwarted in deployment by a "suppressed" dice roll from the random Katyusha fire! The T34s stormed across the rail line,  poor Mark rolling low for both his 150mm firing direct and a rear shot from an AT rifle, so they shot up the artillery, dropped the tank riding sub-machine gunners to assault the German trenches, and rolled round the flank.

But now a turning point was approaching.

Some readers will recall that I resumed my affair with World War Two wargaming last Summer by starting a collection of 12mm, 1:144 scale models, and ruins, with the aim of refighting some of the struggles in or near Stalingrad in 1942. If you'd like a reminder here are the links  first-pics-of-new-project. and making-start-on-stalingrad-ruins

This got hi-jacked by my foolhardy involvement in our Waterloo project at 1:3 scale but I've promised my group I'd put on a Stalingrad game in November, and with Mark Freeman coming into my life interested in WW2  it was a good opportunity to resume. I've spent the last couple of months building up the collection, mostly by my own efforts but also with some judicious purchases off Ebay. I'm absolutely loving this scale as the vehicles still have good detail and the little men are just about big enough to distinguish weapons, officers, observers, radio ops etc. but are quick to paint. 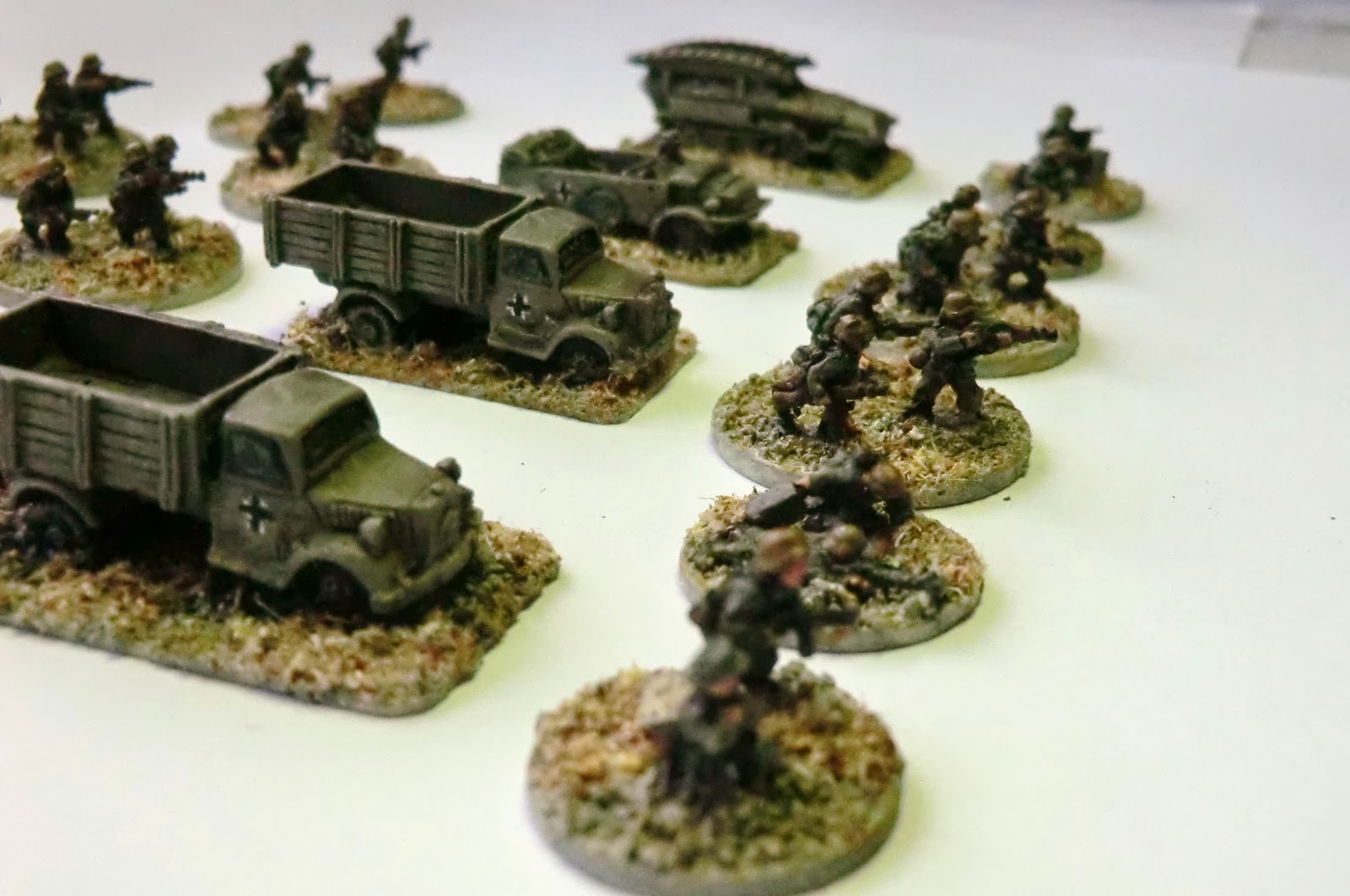 I'm using "Rapid Fire!" rules but I needed to test my theory that in this scale they would work with the ground scale halved. So as a rule of thumb any horizontal distance was halved, for example small arms fire now a maximum of 12" and direct anti-tank or HE fire 24". But I kept movement in time the same - so for example basic infantry move 6" and fast tanks 15" across country. The big advantage is that on a standard 6ft x 4ft table  you can still have a game with quick movment but lots more out of range manoeuvring space. Also if representing a historic battle area you get far more of it on your tabletop.  The figure: man scale of 1:15 and vehicles/guns of 1:5 is still the same, so again, you can get more on a smaller table.

I press-ganged Mark into being a willing guinea pig for a test game. As the "wargames-room-with-a-view" is still at least 3-4 months from completion and habitation I had to wait till the Duchess was away for a long day on grandson care duty so I could commandeer the living room and set up my game.  I had to cobble together the battlefield from the old terrain squares used for my 18th century games, topped with the Stalingrad ruins, therefore this is not much like the custom built urban boards I intend for this project. So I chose an early Stalingrad scenario fought outside the main city on the NW suburbs. I emphasise this is not a proper refight, merely a test game inspired by real events and a real location.....but please don't compare it with historical maps as my terrain squares have a will of their own!

It was Mark's first ever wargame so part of the test was to ensure I gave him an interesting force that got him into playing very quickly. You can see  a PDF explaining the situation with some pre-game photos here or look in the CG's WW2 Folder in my Downloads sidebar for Razgulaevka Station Briefings.

I'll show an arial view of the battle area for now and then follow up with detail in the next post. 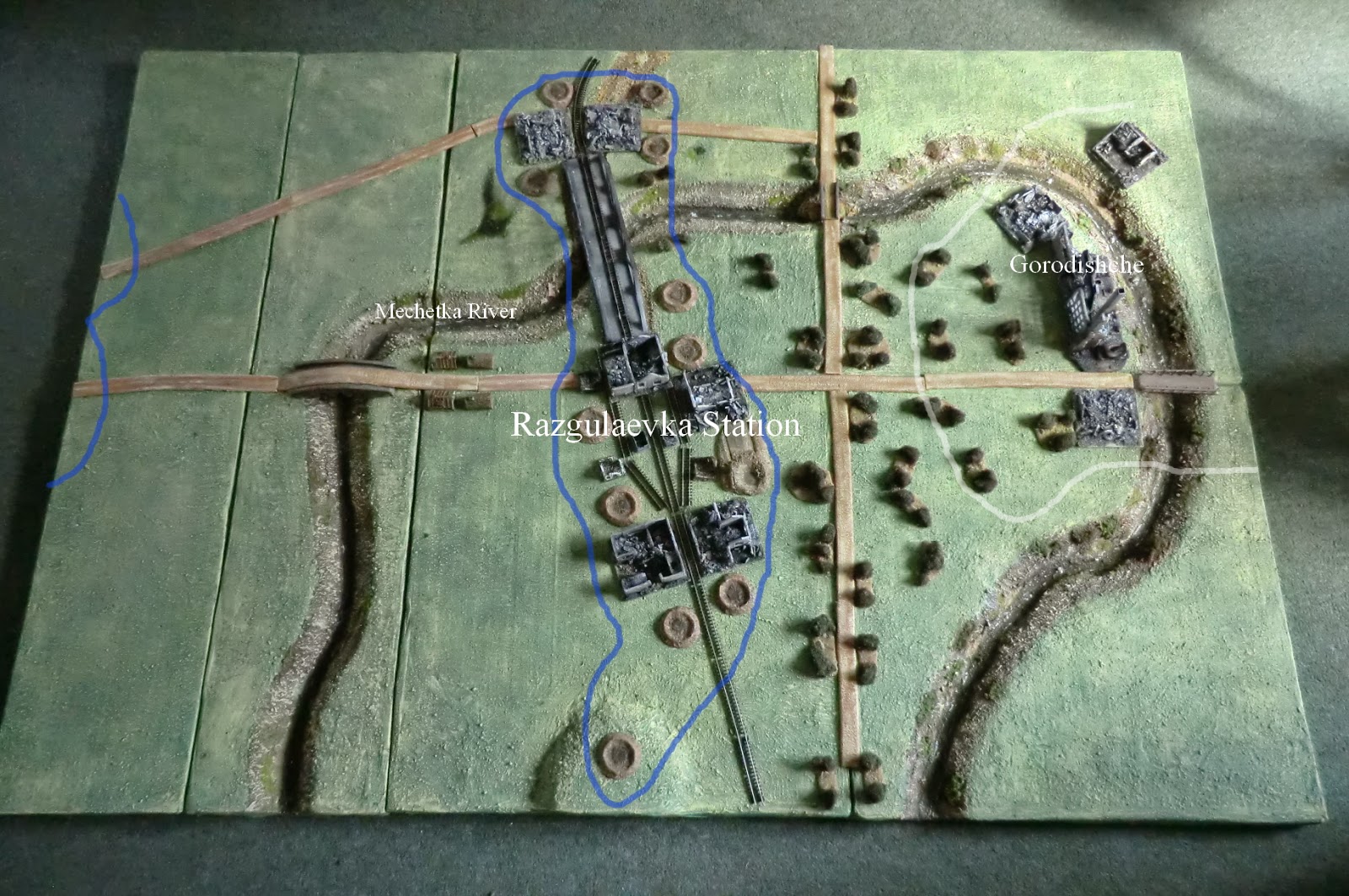