If you've followed this blog for some time you'll probably have anticipated that after the Napoleonic painting binges of 2013-2015 I can't use such numbers of large units indefinitely, so I'm starting to rationalise. I'm hoping that some of my followers might like the chance to acquire some of the former stars of the La Haye Sainte cavalry engagements. My painting standard for most of my Waterloo figures was not wonderful but adequate for "wargames distance". Please email Chris Gregg with your name and postal address if you are interested in purchasing and we can sort out postal cost and payment.

First on show - 9 French Dragoons by Trent Miniatures. Some of you may know this company specialises in early period Consulate/Empire Napoleonic figures and these are designed for about 1800-1812 as they have long coat tails and cloth holster covers. However, unless you are fussy they will do for any Napoleonic campaign. Painted as 2nd Regiment but it would be a small job to convert them to any of the other regiments with red distinctive colour. They formed part of the Elite squadron of our 150 or so figures in the regiment.

Somewhat chunky figures but compatible at a distance with most popular 28mm ranges. 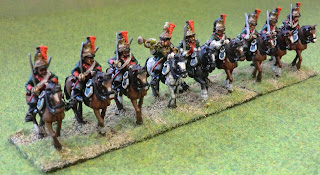 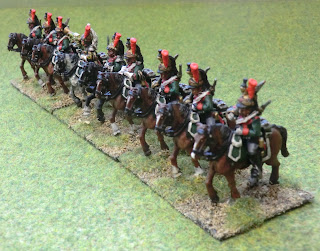 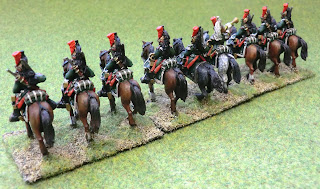 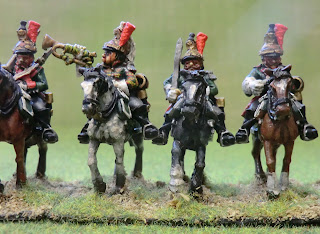 Now for some from the opposite side - 10 metal British Life Guards.
I used the 2nd Life Guards in my LHS refight but the differences between 1st and 2nd Regiments are very slight in a wargame context. I've no idea what manufacturer these are. They are on the smaller side than most and have a slight toy soldier appearance which might appeal to the old schoolers out there. These made up numbers among Kevin's and Paul's "metal" squadron; the other one was entirely made up of my Perry plastics. 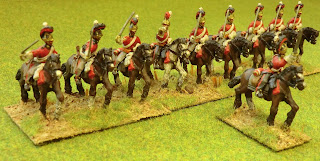 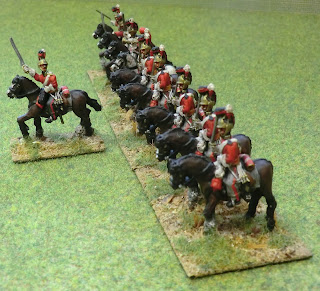 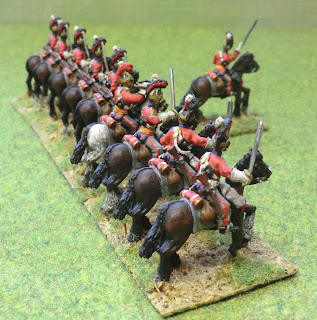 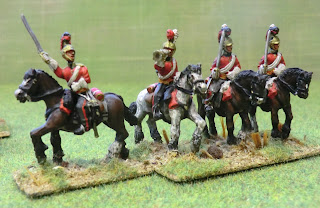 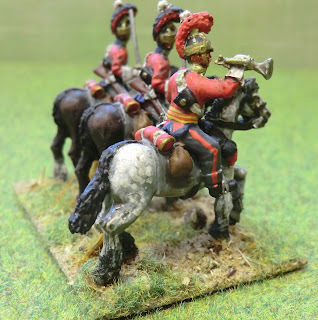 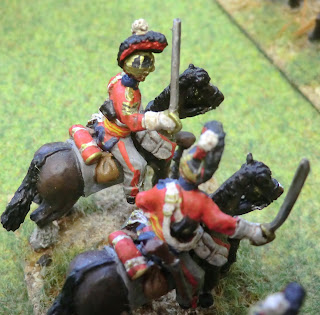 Now two lots of Kings German Legion Hussars. You'll probably recall we had three squadrons arrive on the table, numbering about 120 figures. These formed one of the squadrons but I'm splitting them up now as they are slightly different and that makes numbers and weight more manageable for buyers. Now a confession - I should have had the 3rd KGL Hussars near LHS but they wore shakos at Waterloo and did not have the dash and panache that we wanted for our game. So these are one of the regiments which wore brown fur colbacks. It's not a great deal of work to repaint parts of them as British hussars.

22 x Front Rank KGL Hussars
This lot have 16 troopers, 2 sergeants, 2 trumpeters and 2 officers. all except the officers are wearing the earlier period taller busby/colback - very dashing! So they would be fine for the Peninsular if not the Waterloo campaign. 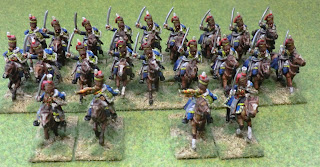 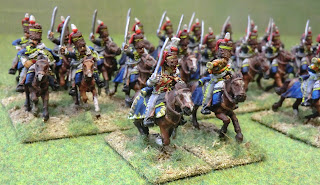 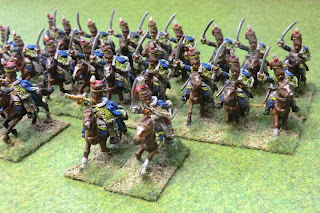 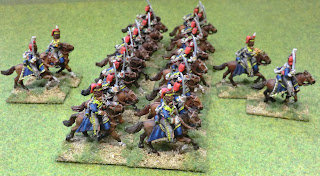 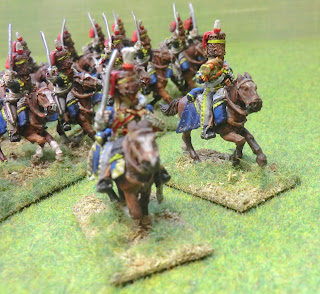 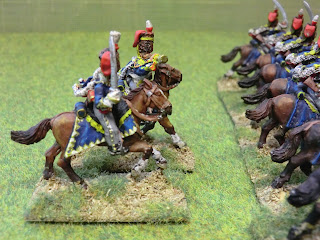 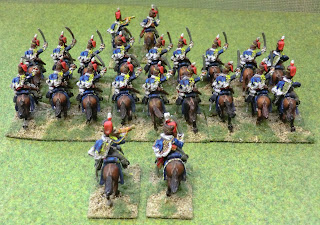 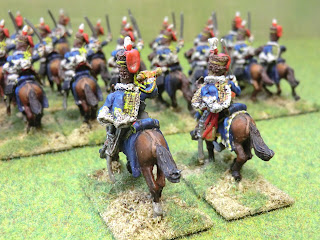 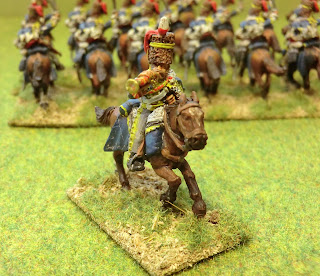 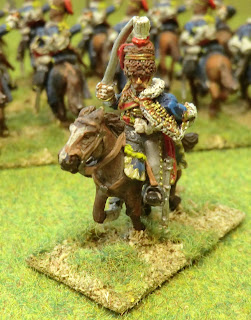 A rather fine unit though I say so myself - £120. Packed weight is fairly hefty 1350 grams.
NOW SOLD

Lastly (until I have another sort out) 13 KGL Hussars with later headgear. Perfectly compatible with the above from a distance but I have separated these as they wear the proper lower busby/colback for Waterloo. 5 of them are Front Rank Miniatures like the above but the bulk are a maker unknown to me, possibly related to the Life Guards but looking more real. There are two officers, one is based separately. 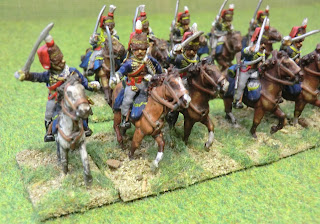 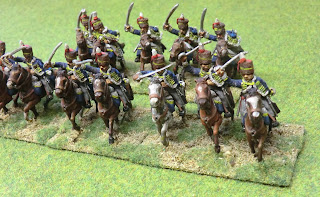 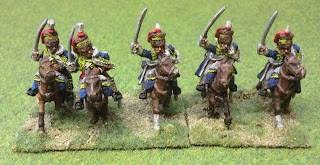 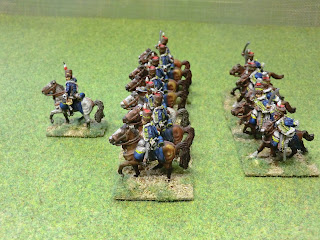 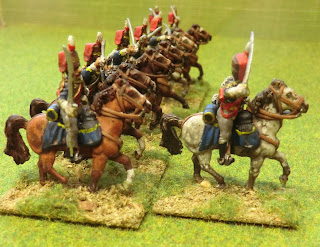 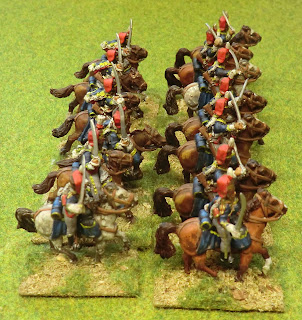 And for those who missed it or would like a reminder here are some photos of the figures in action in the LHS game in July 2015.

Any general interest questions please put in a comment, otherwise just email me.


It's taken a long time but Kevin and I have decided to preserve a photographic record in one place of our West Country Waterloo madness refighting the action round La Haye Sainte at 1:3 scale. I've made a special page - see the sidebar at right or a link here.
This isn't comprehensive it's merely a selection of good photographs which lent themselves to Photoshopping. I will be adding to them bit by bit as I delve into the archives or we fiddle about with some more. Regular readers will be familiar with a lot of these but many have never been published before. You'll know that they represent something visually rarely seen in wargaming, as distinct from static models, so if you are tempted to share them anywhere PLEASE give credit to this blog, we've put an awful lot of money and time in our lives to bring this to fruition.

Readers have been incredibly generous in their praise for this project so if you've commented often already don't feel you have to do so again, but, as always, it's nice to feel appreciated.
Here are a few samples 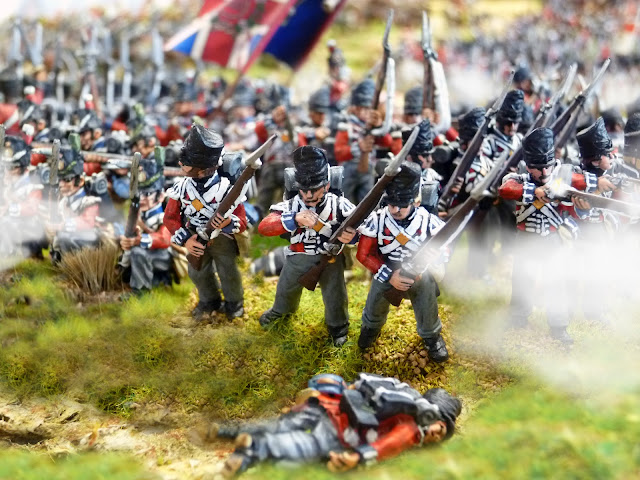 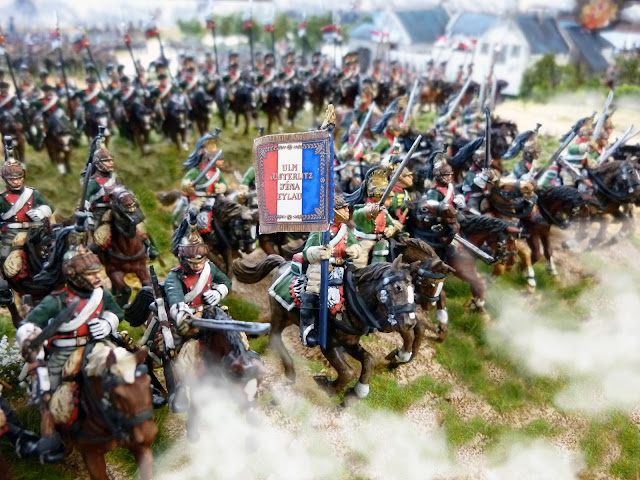 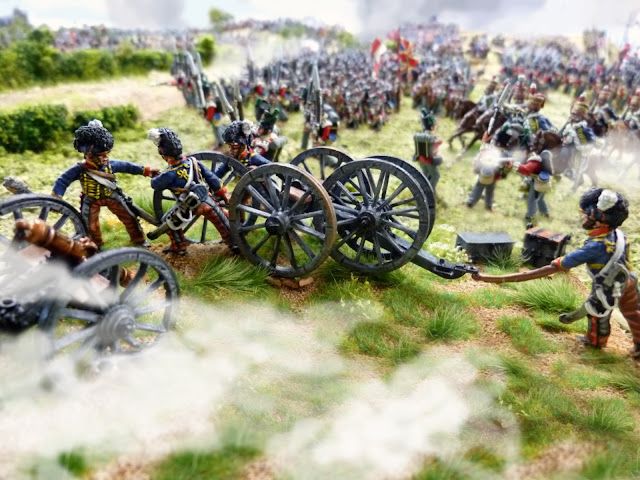