Encounter at Kaaskerke - a Napoleonic game using "Rank and File"

In my previous post I gave information about our plans to refight Quatre Bras at 1:20 scale and some photos of our battlefield for the latest test game using Rank and File rules with some slight variations.

Using "Rank and File" rules
We have altered the firing ranges more in line with our ground scale of 6 inches = 100 metres so musket range is 8" and artillery ranges 36", 48" and 60", depending on calibre.  Most notably previous tests suggested that the limited differentiation between troop types would inhibit our ability to let the smallish experienced French battalions perform well against the larger, generally inexperienced Allied battalions. So Kevin has worked out Veteran/Regular/Green values for all units for Firing/Hand to Hand/Morale. These needed checking and we found they weren't all right. Size of units was proving critical, and slavish adherence to historical order of battle numbers would not translate easily to the R&F formations. In particular the large Dutch-Belgian cavalry regiments needed to be split into wings or squadrons.  This game, we hoped would test the durability of certain units and how the infantry versus cavalry rules worked. Keeping the game fairly small meant we got our wishes in a day's gaming at the speed of one player at a time.


The Players
The project team is Kevin East, James Fergusson, Richard Newcombe and me, all veterans of West Country Waterloo at 1:3 scale, and we are joined in the effort, though not, alas, for this game by veteran wargamer from Birmingham, Tony Dillon. In between making the tea, pouring the beer etc  I actually got a command on this occasion - approximately a third of the French force, the right flank. Richard was French C-in-C and James controlled all the Allied force. Kevin had organised the Orders of Battle and objectives and umpired admirably.

The game set-up
As stated before, we took my Spittelwitz battlefield, mucked about with the add on terrain items and Kevin turned the scenario 180 degrees so the attackers (French) came from the opposite side. Here is the sketch map he gave me to modify the terrain, also showing the Victory Points he allocated to certain places.


You can see the Orbats, maps, objectives in full detail for each side as PDF documents via the Download sidebar at right Napoleonic.  A small number of fairly isolated Dutch-Belgian (DB) units held the front line Area A and a couple of units were in the camp in Area B. Reinforcements were due to arrive by dice roll. The French infantry brigades were committed to come onto the field at centre, left and right - march order decided by dice, with the two cavalry brigades subject to random arrival times in baseline areas 1 or 8. I will carry on with the narrative mostly using the picture captions. 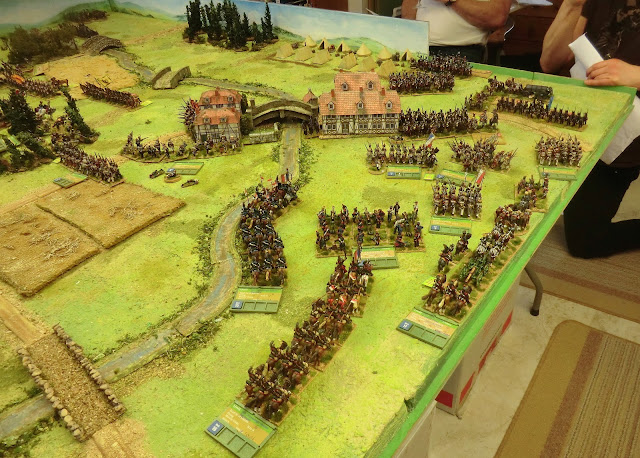 Above and below: Two overall views show developments. Through Veteran status my leading battalion formed square in time and the Light Dragoons were repulsed. The infantry formed column ready to follow up. My horse artillery battery began to deploy and fire on the Brunswick infantry as they received an attack from my right flank battalion. But there was no way through yet for the Lancers and the foot battery failed to get any hits at all on the unit in the village! My left front battalion received more hits from fire from the village and I retreated them to safety before they fled. Richard's Legere Battalion had seen off the enemy Jagers in the crops and pressed onto the village only to face a standoff against the defenders and he withdrew to a safer distance. 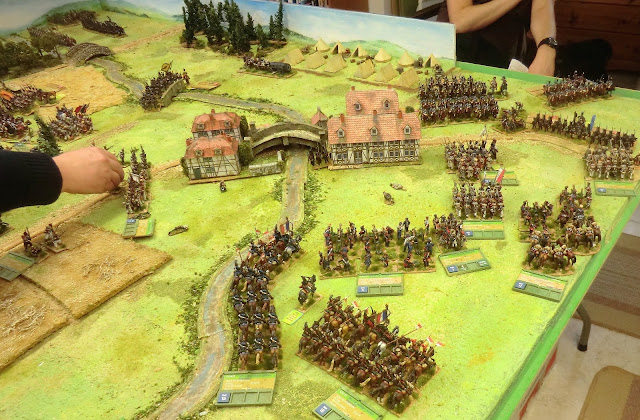 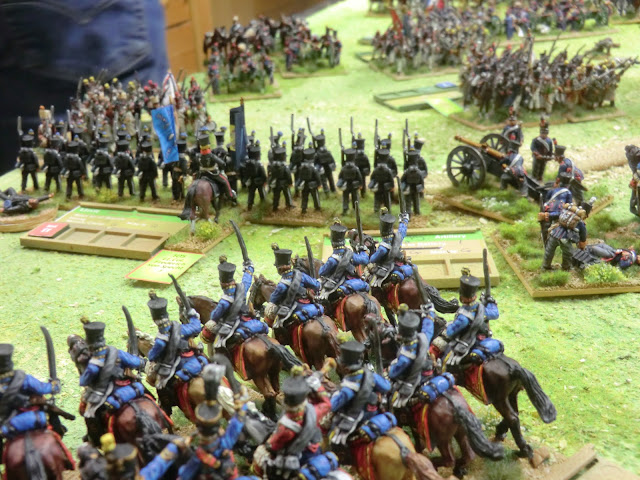 Above and below: some close ups of the Dutch-Belgian Hussars and the Brunswick/French melee 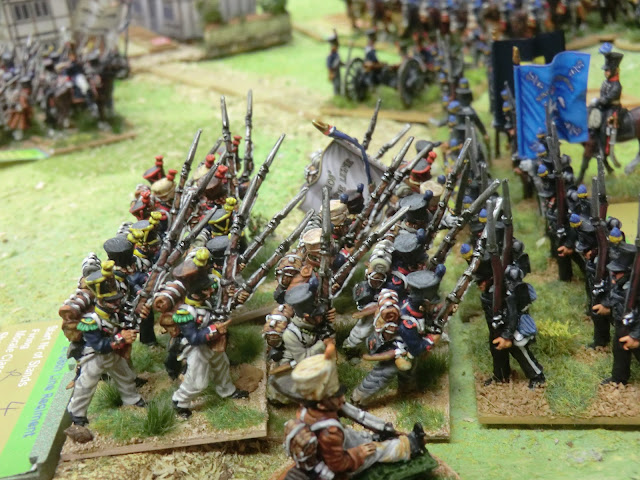 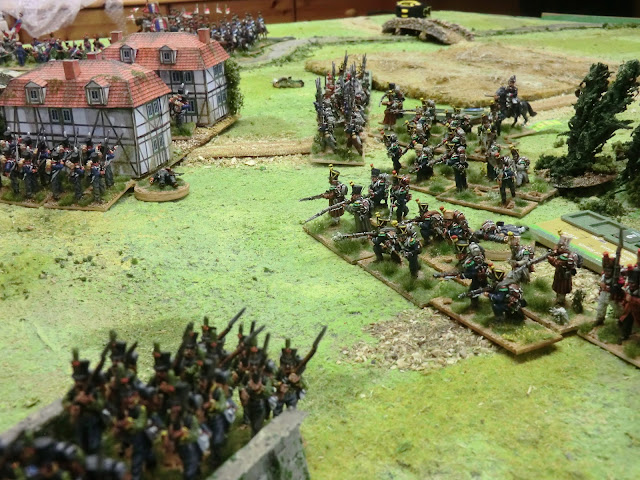 Mutual Heavy cavalry impact
Moving back to the fighting on Little Houyet:
And French Cuirassiers try the same thing in the centre, charging down from Big Houyet.
Climax on the Kaaskerke front
Conclusion
It was now 5.45 pm and Richard and James had quite a long journey so were keen to wrap up. Kevin had been keeping a tally of objective Victory Points gained and pointed out to Richard that he was only one move away from winning! Both central bridges were within reach but still theoretically controlled by the Allies making the current score 14 to 4. The 6 points for the bridges could switch the result dramatically. But Richard did not see it as that obvious and declined the extra move of play.
So to summarise:
The French had supremacy on the left flank and centre with plenty of heavy cavalry and artillery to carry forward the threat. They had full control of both Huyet ridges. I had completely failed to achieve anything of significance on the French right wing and it was a classic example of it's no use having large or powerful units (2 regiments of "shock" Lancers!) if you can't make space to use them. The Dutch Belgians and Brunswickers were still in good heart in the camp and Kaaskerke and a support line to the South-west. So 11 moves of play and a good victory to James with his often undervalued Low Countries Allies.

What of "Rank and File"
We are really getting into the rules now and making slight modifications that should help them fit our purpose of refighting Quatre Bras with an even chance for either side. It was Richard's first game with them; he managed very well and declared in favour. The game was full of action, and credit to Kevin for a good balanced day which we all enjoyed.

I felt the new gradings gave a much richer and more realistic game. We agreed that most French infantry battalions at true 1:20 strength are too small to have much life expectancy, which is wrong for 1815, and Kevin will have a look at the historic orbat and consider amalgamating and averaging out to create fewer, but bigger, battalions for the next game. Conversely some cavalry regiments will be historically too big to enable any formations remotely like a squadron column (so our hasty reorgisation on the day for some helped) We proved the point that a 4 base good quality cavalry unit is still very effective in the right circumstances but a10 base one is too unwieldy. 6 bases felt about right and could probably go to 8 if necessary.

So for Cavalry we are thinking of a rule such as this:

"The orbat may stipulate certain large cavalry regiments are split into sub units (wings or squadrons) of specific base numbers. These are completely separate units for the game but with a unified identity such that they must not be intentionally separated by more than 1 move (20") from the regimental commander or other sub unit(s) of that regiment (enforced Morale results may separate them unintentionally in which case re-unite when they can). e.g A two wing cavalry regiment could span 40 inches plus the width of the figures if their colonel (or Brigade commander) is placed mid way between them)".