Hougoumont at 1:3 scale: How I made the terrain - Part Four

Many of the wider angle photos in the  previous part showed the area of the Formal Garden looking like a parade ground! Would that it could have remained so! It proved to be one of the most challenging modelling assignments I've done, and in this part I'll tell you how I did it and wrap up on the Hougoumont terrain as a whole.

The first problem with the Formal Garden was what did it really look like before the battle. Kevin sent me this extract from a book he has, plus a written description of the whole complex

So I then had a good look at the plan in Adkin's Waterloo Companion and thought this very practical; at least geometric shapes could be measured and planned, even if I didn't know if the stylised plants represented anything in particular. It also shows probable veg patches outside the garden wall, and some ideas for the Kitchen Garden on the West side of the farm. 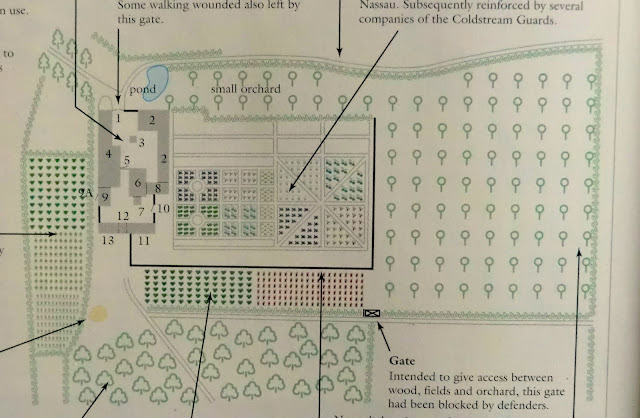 But how to render some of the formality in 3D? Luckily I had taken photographs of the splendid model in one of the museums at Waterloo itself. Given that it had whitewashed walls and some thatched roofs this was different from our Hovels model, but I guessed more authentic? So I reckoned these ideas for the garden were worth having high on my list 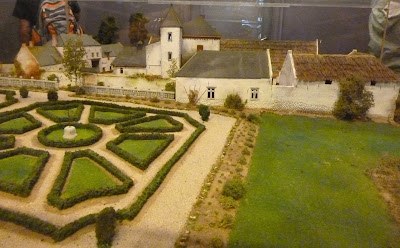 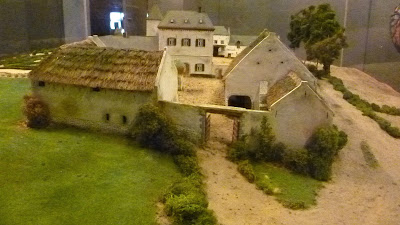 There were a few other sources along the way but the main thing I learned from it all was that no one claimed a definitive garden design for June 1815, so I could do what I usually do - pragmatic and practical using up the materials I had rather than buying fresh. One fundamental question, though, has never been answered in any of the accounts I read and that is "What state could a formal garden be in after a very heavy rainstorm and bivouacs by hundreds of soldiers?"  I suspect it would have been a muddy, soggy mess but that wouldn't look very nice, and you lot would have been muttering "he bottled out of doing it formally!!"  Can't have that so I have taken up the challenge.  However, it appears that all the concentration on straight lines meant I wasn't reaching for my camera very often in this process - so the examples are rather random! I was using the large gravel effect as a base for all the garden work therefore would not have to make any more paths. Everything was stuck down on that so it would not move during play.
At the right you can see some more lawn against the terrace wall and these are pieces cut from some Javis scenic grass mat. It's very thin and not durable - meant for railway modelling, so OK for this one-off purpose but I wouldn't recommend for active wargaming. That was it for the moment on the formal garden, though there are finishing touches still to come.
I now moved my attention to the vegetable gardens, and in particular the ones along the southern garden wall. All of them used the ribbed brown carpet as a base, dry brushed and highlighted before the  veg was applied. There are no right answers for this; I think it's just a matter of getting bulk and texture however you can and covering with different shades of green scatter for variety.

For completeness, although you are probably bored by now after 4 Parts, here are a few more photos of the practically finished table awaiting the troops. By now I have repainted the inside of the boundary walls along most of its length, opting for a more subdued smoke effect than the lively one for LHS. If you look hard you'll see I've also put in some trees to blend diorama like with the 3D versions - but they are rather crude as I had to paint them "upside down" bending in over the walls!  Just think of it as suffering for my art :-)
In Part One a viewer kindly complimented me by saying I made the terrain-making look easy. Well, I suppose it is easy if you take it in small chunks and set yourself wise limits, but a project on this scale is not to be undertaken lightly and, compared to most, I'm probably slightly mad (which is what we said at the outset of the project in August 2013!).  When the LHS game finished in mid July, I had a week to recover then started the deconstruction of LHS and the construction of this Hougoumont table. I worked on it almost every day till early September, several hours a day. Final touches of the little red flowers were stuck down on 10th September and we played the game 11th - 13th. But in a team we all play our part, and my dedication to this was to reciprocate the two years of enthusiasm and hard work put in by Kevin. Hopefully I had managed to put his Hougoumont Chateau in a setting worthy of it, and worthy of the hundreds, if not thousands, who died and were wounded in the battle for it in 1815.  Kevin and the five other project members between them provided more than 3000 figures to play the game; my contribution of miniatures for this one was a mere 100.

I will finish off with a few randomly selected photos of the game in progress just to give a taster of what is to come. These five photos by Kevin East. 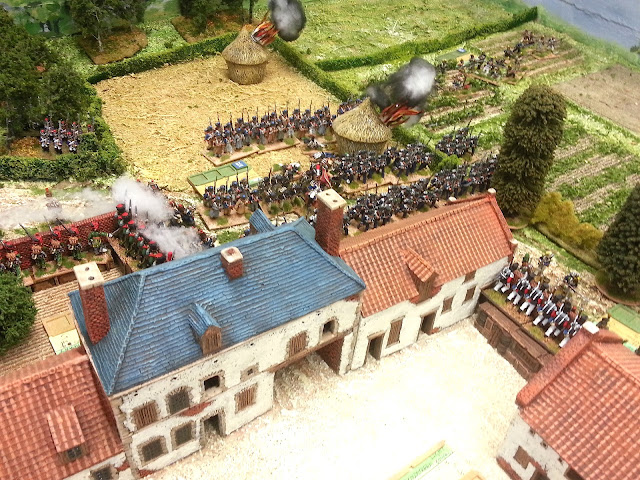 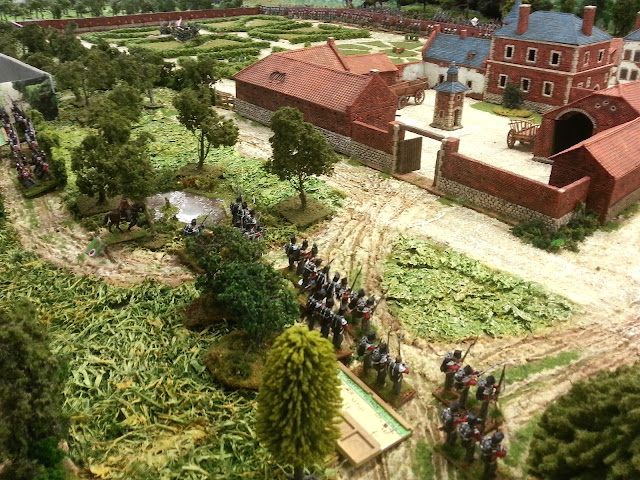 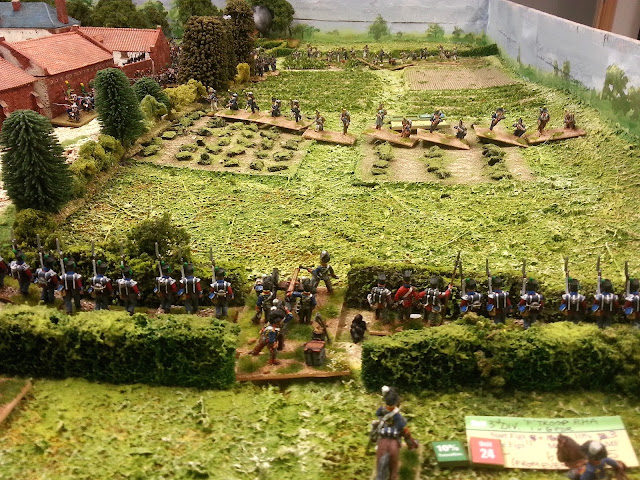 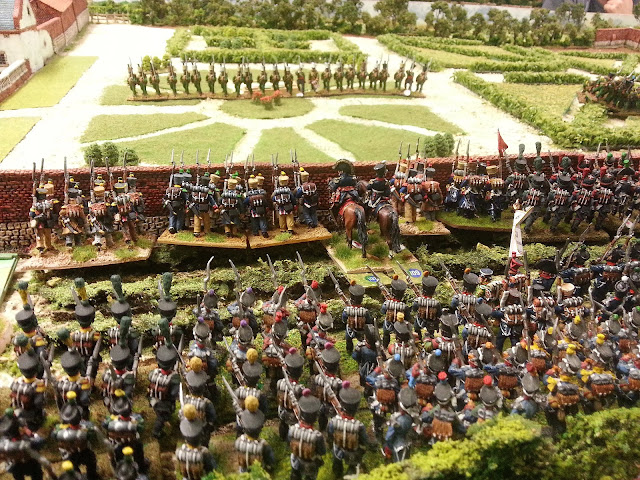 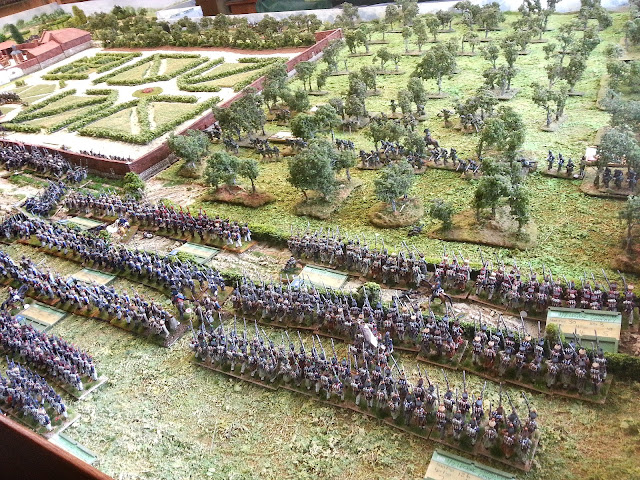 Next time - Hougoumont wargame planning and methodology, though that might be a couple of weeks yet before I can manage the time.