Background
In our aging years the Duchess and I are trying to see bits of the UK we haven't been to before. The North East coast is part of that unknown but as we planned it we realised it was far too big and interesting for just one week's holiday, which was all the time we could spare this year. The attractions of the North Yorkshire Moors were obvious as we like walking. Whitby was alluring as an 18th Century shipbuilding port with many old streets and buildings intact (and fish and chip shops!), not least because, as the home port of Captain James Cook, it gave us another opportunity to investigate the Duchess' mariner ancestor. William Peckover, born at Aynho, Northamptonshire only about 15 miles from her Oxfordshire birthplace, sailed on all Cook's voyages of discovery as well as with Bligh on the Bounty, so that was an easy choice.  But secretly I knew that fellow partners in 18th century crime, Colin Ashton and Graham Cummings, live at Middlesborough and Redcar respectively, and so, with a little persuasion we included them in our NE coast meander.

The reaction of most Southerners I meet is "Middlesborough?" why do want to go to that xxxxxxxx? But in fact we were impressed, lots of modern development, no smoky factories or mines now, very green entry roads and suburbs, and easy access to all the above-mentioned attractions. Oh, and some of friendliest strangers you could ever hope to encounter (and that from a man who lives near big- hearted Stroud).

The Burrow
But the best attraction was Colin Ashton's new Burrow. 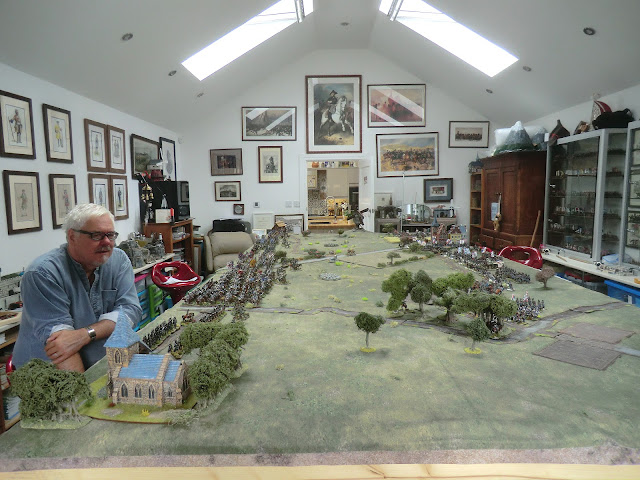 Situated in a lovely big house in a leafy suburb of Middlesborough Colin, well supported by his wife Katherine, has made a wargamer's haven. Many of my readers will be familiar with Colin's wonderful blog link here and he has done a very nice account of the battle he laid on for me to play, set in 1793 between the Revolutionary French and the Prussians and some Allies. Here it is Battle on the frontier.
It is a very good and almost accurate report of our day and he has done a far better job of describing it than I could; please take a look. So in this post I am concentrating mainly on the environment in which we played as it might give more insight into Colin the Wargamer and generally jolly nice bloke. 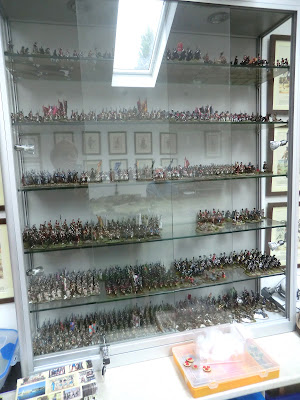 Our Game
Just for balance here are some of my photos of the game in progress and very exciting it was too at times. We used General d'Armee rules and about 1200 figures and played from about 1115 till 1715 with 30 minutes for lunch break. Not quite a complete result but sufficient for a reluctant Colin to declare of himself "Well, I haven't won!". Lucky I had a mainly defensive objective and since I knew nothing of the rules just played it cool most of the time. However, Colin had mentioned in an off-hand way, how miffed he had been when one day a few years ago an opponent had given up after Move 2 reckoning he had no chance. So I wanted to be sure I kept my army intact as long as possible to show my host his efforts were worthwhile.

I had asked Colin if we could use the General d'Armee rules as Kevin and James are trying them out for whatever Napoleonic extravaganza they are planning after West Country Quatre Bras and I thought it would be useful locally to have that experience. So I must thank him for organising the game accordingly and conducting the whole thing with minimum effort for me. With such a competent host, and me in holiday mood anyway, I absorbed the bare minimum from the Playsheet and just let him guide me. We went at an efficient pace but had a lot to chat about besides the game action. So first impression is that it was very good for two wargamers to get an unambiguous result in 5 hours or so playtime with over 1000 figures, yet the feel of unit tactics was still evident. We used a lot of skirmishers, but the system is slick for that, and plenty of cavalry and infantry charges with lots of artillery support. Without me having tried to understand the rules in detail these are a  few observations for what they are worth:
On balance a good set and I know they get a lot of praise from wargamers whom I respect. So good luck Colin and thanks for your wonderful efforts.

Crann Tara Miniatures
On the Sunday morning we were passing by Redcar on our way from Middlesborough to Whitby and Graham Cummings had agreed to entertain the Duchess and me for coffee. It was great to see his neat house and my original oil painting  "Jacobite Charge, 1745" on his wall. Graham willingly explained at length what it is like to found and run a model soldier company and we learned a lot even though we did not see his wargames room or garden office.  We were treated though, to see the super master figures of his new Saxon range, hot from the casters, see his blog Crann Tara Saxons.

And, as one does, I could hardly visit Graham without pre-ordering a little something....So this time it was his dismounted Hussar range and horse holders, more limbers and horses for my 18th Century artillery, and best of all, a regiment of French Mousquetaires. Here are some pics as I prepped and based them at the weekend.

If you want some for yourself take a look here Crann Tara French cavalry
Graham also gave me two of the originally printed St Paul books which he was personally involved in producing since Neil Cogswell is a near neighbour.  Thanks for your generosity Graham and for your time.

None of this excitement for me would have happened without the now passed A Military Gentleman Forum, so thank you too to John Ray.
Posted by Chris Gregg at 00:06 13 comments: