Fans of Hussarettes, don't worry - here's a picture for you!

and for Wargamers, don't worry, this is about wargaming (but also a little art) so here's a couple of pictures for you too. 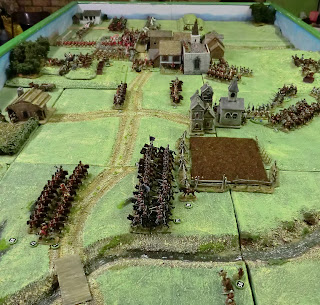 If life imitates art then, in my case at least, art gives an insight into life (wargaming is not just a  hobby is it?).  It was a few weeks ago, while the UK was enjoying a brief Summer in September, that I found myself on a  farm in South Gloucestershire conducting a photo shoot with my latest Hussarette model and her horse. To protect the innocent I'll call them Emily and Bob.
For those who need a reminder of what my Hussarettes project is about please see the previous posting
progress-on-hussarettes

I needed a customised photo shoot on horseback, preferably with a female rider, but I knew this would also give me valuable real life references for a wide range of military illustrations for the future. I have an archive of  American Civil War re-enactors, many mounted, taken in camp and more distantly, in battle at the Gettysburg re-enactment in 2008, but it's not the same as spending a couple of hours with horse and rider performing just for your camera. The Duchess came up trumps by introducing me (sight unseen) to Emily, who is a friend, and Bob. Emily was very willing for any opportunity to exercise with Bob and just seemed a natural in the tight jodphurs, waistcoat and neck stock.
If there was a downside it was that Bob proved to be 18 years old and rather hairy compared to all those classic paintings of valiant stallions ridden by dashing hussars from which we wargamers get our inspiration. At 16 hands he is big - the right size for a dragoon or cuirassier steed, but Emily is only 5 feet nothing. This left a little to the imagination of proportion to her historical counterpart soldiers, I hitched her sword belt up a few notches for the slim waist, and found she was not that much taller than the sabre!. But Hey!, she made up for that as a Hussarette , so who's complaining?
So for comparison I found this French Dragoon by Meissonier who is on a nag that looks quite realistic because he is not tall and sleek, he is a bit hairy and he looks disinterested. Probably not that well nourished or cleaned either (unlike Bob in these respects who was mostly happy and clean and loved his cantering). 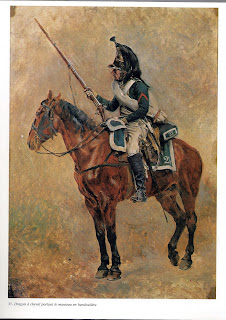 We did lots of shots first with the sabre and Bob was very well behaved. He and Emily are life-long friends and he trusts her completely, but he's not trained with cavalry weapons and didn't like the sabre scabbard touching his flank. We had to take it off once that part of the shoot was done as he got a bit tetchy. That was my first real life insight into part of the military training necessary for horses, more was to come.

"They shoot horses don't they?"
Forgive the allusion to that 1969 movie title but this photo says just that to me! How did it come about? 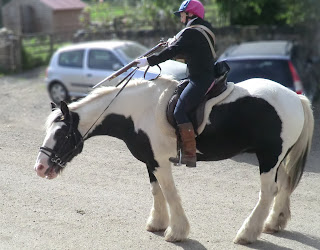 I needed some real life references for cavalry firing from the saddle and got Emily to raise the slung carbine to her shoulder in the aiming position. So good is her understanding with Bob that she naturally dropped the reins on his neck and he stood quietly. But I quickly thought this did not seem right since to me, as a non-horse rider, surely with a combination of the rigours of campaigning, unfamiliar horses and riders, and the noise of battle, the cavalry soldier would have to maintain a hold of the reins lest the horse bolted? Emily gladly adopted this action for me and many times she tried to "fire" (no real shots). Each time Bob bucked his neck and moved a bit in protest and the photo results suggest that any ball fired might have gone anywhere but towards an enemy 50 to a 100 yards in front. In this case I think the poor horse would have got it between the ears.

So what can I conclude from this?
- There's no way cavalry could fire effectively while moving.
- Even when supposedly static the horses will move when least expected
- Lots of shots will be wasted, and there may even be "collateral damage"
- Wargamers wanting to fire their cavalry effectively while mounted will need to prove their horses are well trained and familiar with their riders. Not very common if we are to believe contemporary accounts of wastage and death on campaign among military horses.

So it was with some relief that this part of my bigger exercise proved that we might have it right in the recently rewritten rules about cavalry firing in my 18th Century wargame rules, "Wigs and Wine".
Here are some relevant extracts:
Heavy and Field artillery and mounted cavalry cannot move and fire; others may do so.

Well, I hope this has proved of some interest, please comment and let me know what you think. If you are a cavalry re-enactor with practical experience that would be particularly appreciated.