Battle of Langensalza: Part 1 - Background and making the terrain

Once a year, if I can,  I try to do a sculpted terrain on the extended table. Many readers will remember the 12 feet x 8 feet setups for Waterloos x 4 , and four days of playing Quatre Bras, and the two big games in The Raid on Vestisle. COVID lockdowns put paid to that in 2020 (though I have still to blog on the excitement I got up to that year!) So in 2021, after the Brampton terrain and all the spin-off games on that 8 x 6 table in May and June it was time to Go Large again. But what to do?

As usual I asked my mates and it emerged that Guy wanted to use his new modest-sized Crann Tara Saxon Army, and I was keen to exercise my newly painted RSM95 Hanoverians.  I looked in the masterwork on the Saxon Army "Between Scylla and Charybdis" by Helion & Co, and found in Part II page 78 The Combat at Langensalza. This battle had manageable numbers of Saxons and French fighting an Allied force of Hanoverians, Hessians and Prussians, it seemed ideal. Emails with Guy and a bit more digging revealed that the same description of the battle was in Kronoscaf but with the great advantage of full orders of battle of all the units on both sides which were within marching distance of the battle area. There was also a difficult-to-read old map reproduced there.   Combat at Langensalza

Very handily you can click through for the majority of regiments to find their uniforms too. This was particularly useful for me as I had to work out which units from our collections  best represented the scaled down formations we needed to make a balanced game. Paul B had kindly offered his Prussians and Austrians to help out as required.

I try not to do too much boring history on the blog but a bit of background is necessary for this. The Prussians captured and dispersed a lot of the Saxon Army in the Autumn of 1756. What was not absorbed into the Prussian army got away to fight either alongside Austria in Bohemia and Silesia and Saxony or across Germany to become part of the French Army.  By February 1761 it appears that a corps of around 10,000 Saxons was a formal part of the French order of battle within a French-officered hierarchy and holding a key part of the front line against the Western Alliance in Hesse/Thuringia.

As the Kronoscaf account tells, by mid February the Hanoverian/Hessian/Prussian Allies assembled a force across the River Unstrut from the town of Langensalza where the Saxons were based, and managed to bridge the overflowing river and the marshes either side to try to take the Saxons by surprise. It seems evident that the Saxons weren't caught completely napping as by dawn they had a strong infantry brigade on high ground overlooking the river.

To summarise briefly - the Allies were dominant in cavalry which they sent across the river first, by two or three routes; the Saxons began to retreat but were eventually surrounded.  Another Saxon Division under French control arrived but did not stick around. A lot of the Saxons were cut off as they tried to retreat through a flooded gorge at Ufhofen and around 2000 were taken prisoner, although they gave a good account of themselves first. That only took about two hours and involved no more than a few thousand men on each side so no wonder no one  (in the general wargaming community anyway) has ever heard of it!

But taker a closer look with your Games Master hat on.

Here is the map: 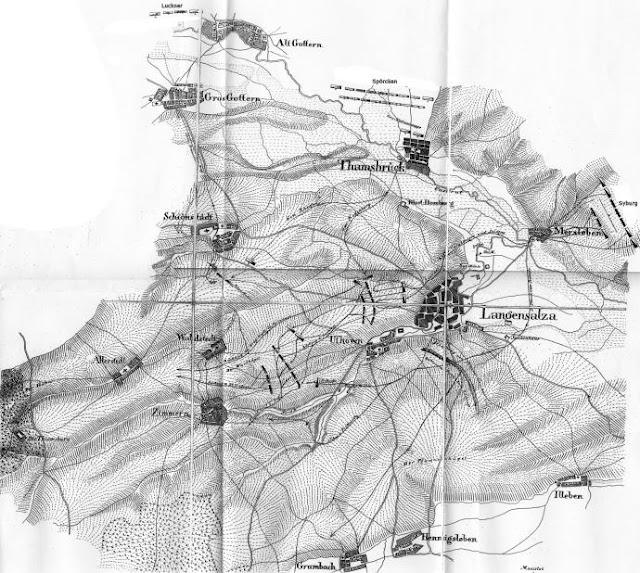 The high ground to defend and the difficulty crossing the Unstrut should have provided the Saxons with a better chance. And then looking at the OOBs I could see that they could make a balanced game with the following two changes:

1. The French high command have the will to fight and not just retreat to live to fight another day

2. Both sides can call on up to the whole available forces if you allow a few more hours marching time.

So I came up with the following list of figure requirements calling on elements from our 3 collections of 28mm miniatures. 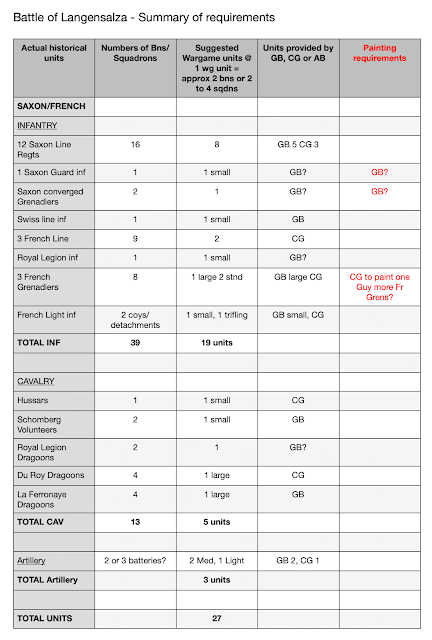 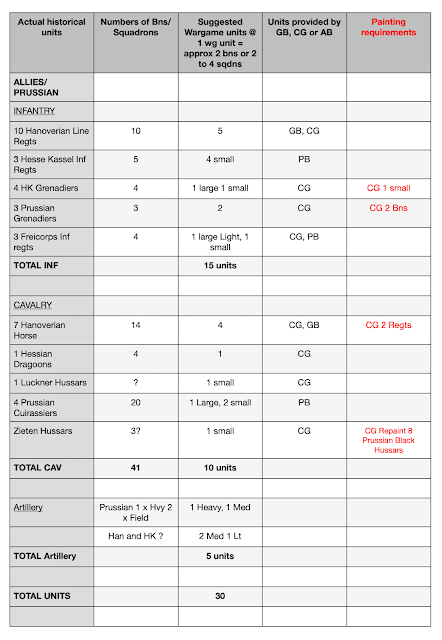 This was using, as usual, "Honours of War" as our basis but the scale needed to be more or less halved (I hate the term "bathtubbing" but many will know what I mean).  That was because the ground scale had to be manageable on the 12 x 6 table so I settled on 2 feet (60cm) being about 1000 metres and therefore we could simulate approximately 6 kms of frontage. I altered the weapons ranges better to simulate the decreased ground scale from the normal HoW battalion game, more on that next time.  So, with help from Google Earth, and using Photoshop, I interpreted the historic map to arrive at my tabletop battle area with enough surrounding territory to give us a run-up for the reinforcements. (I have invented names for the 3 x BUAs just North and East of Langensalza town) 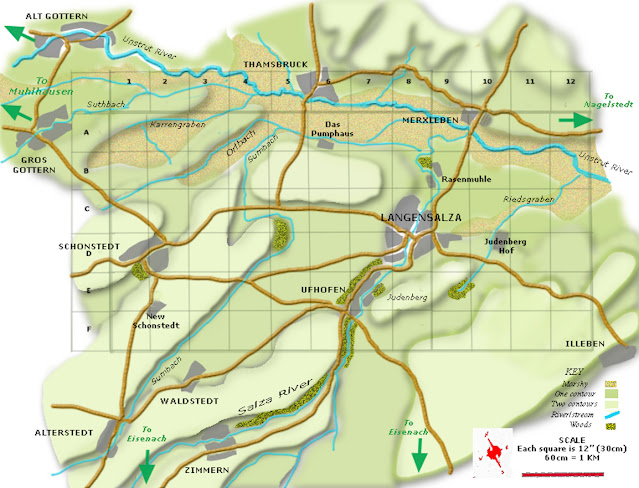 We set the game for a couple of days in mid August with Guy as the Saxons/French and Paul B as the Allied commander, others would be invited.  I won't dwell much more on the history and game at the moment as my next task was working on the terrain, and so that is what I will give you here.
Langensalza - building the terrain

I'll just refer you back briefly to the customised terrain for the Battle of Brampton. Several readers have expressed dismay or sadness to me that these art installation terrains are temporary and are "destroyed" after use. But don't worry, I've said it before and I do try to discard as little as possible, and much of it is simply cut up, stored in the garage and reworked later.

Disposing and repurposing the Brampton terrain for Langensalza


Basics of the river and marshes 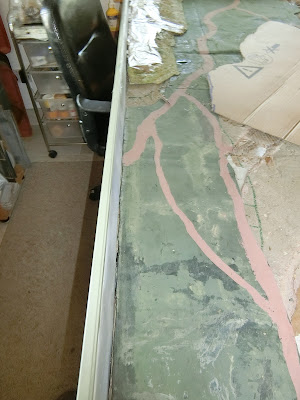 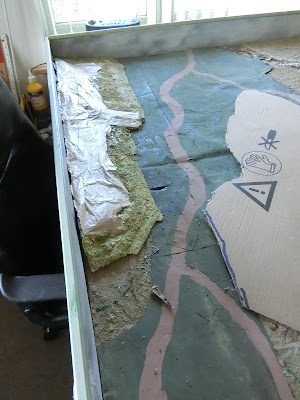 Before I got any farther I had to get a reasonably flat basic surface down on which to paint and build the River Unstrut and the surrounding fields inundated by flood water, and effectively becoming marsh areas. I called on the store room once more for old black vinyl which I had used many years ago as the base for my sand table in Cheltenham. Interestingly it still had a coating of some darkish green powdery paint which I could put to good use as an undercoat. 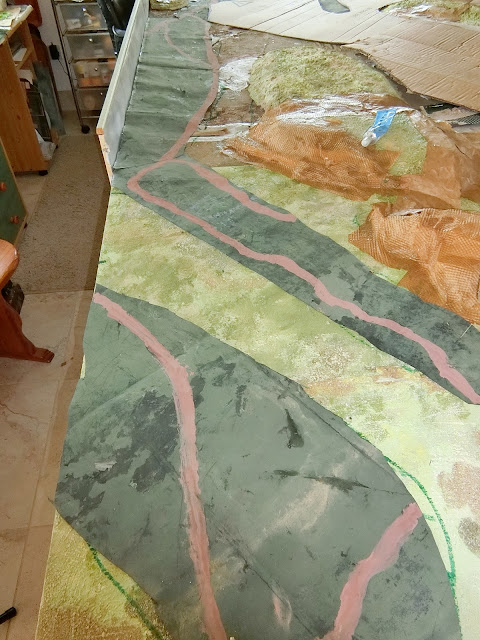 So this was cut to shape and the basic river and streams painted on before the final hill contours were placed on top.

Adding the intermediate contour
So far what I have is the lowest contour at river level and the highest level (Two contour on my map). What I needed now was to blend it all in my filling in with what I called One Contour on my map.
This was basically big sheets of packing cardboard cut to shape and made into a giant jigsaw puzzle stuck together with cheap masking tape. This very fragile surface was then all blended and stuck together by the most fascinating process of papier mache modelling


Cutting the streams and starting colouring the contours
I had to wait a day or so for the paper and cardboard and PVA 3D model to dry out and then the next task was to mark out and cut channels where the stream cuts through the hills. This is one of the most fun parts of sculpted terrain as you get to really feel the issues of terrain obstacles  - "oh yeah that bank is steep, no wonder artillery can't cross".

Roads and more intensive colouring
There are no right or wrong answers with this. So far I'm experimenting to some extent to work up colours across the table and keep an eye on how it is developing, like a 3D painting. Time to give the roads some definition, smooth the surface overall and then add deeper shades and washes, plus dry brushing to get an overall unified effect but one that is practical for gaming purposes.
"Any fule can make a splendidly realistique landescape modelle, but knowing when to hold back with thy hands and brushes for gaming practicaletty takes gude judgemente". (Thoughts of Sir Joshua Gregg RA, Treatise on making ye model battaylefields, Oxford University Press, first published 1775) 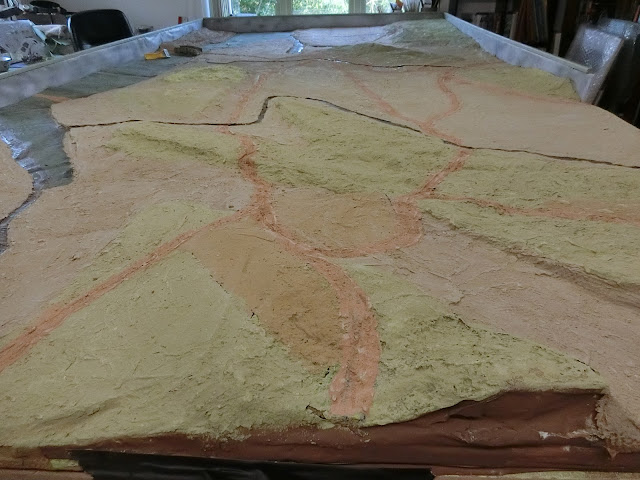 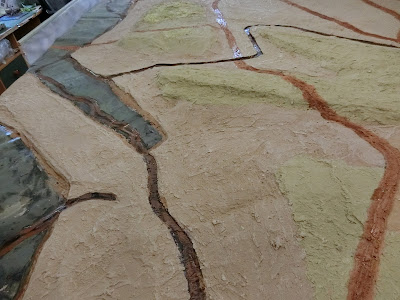 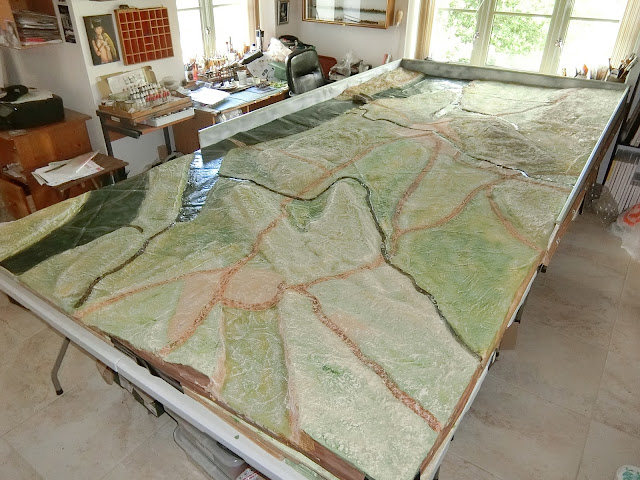 The scenic "add-ons"
It would be nice to go on to show you all sorts of custom made additions to this but you might be relieved to hear that I just raided my extensive boxes of past wargames infamy and unearthed quite a lot of stuff that hasn't been on a wargames table for some time; some of it predates my move away from Cheltenham in 2013. Here is a tour in photos with some explanations 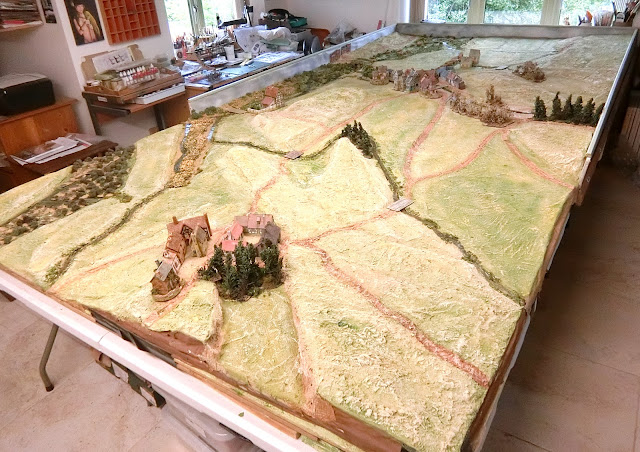 The photos above were taken during a test run for buildings and not what I ended up with. The final battlefield is shown in the pictures below. I put some random units on the table too so as to give the players an idea of infantry, artillery and cavalry sizes to help their map deployment. 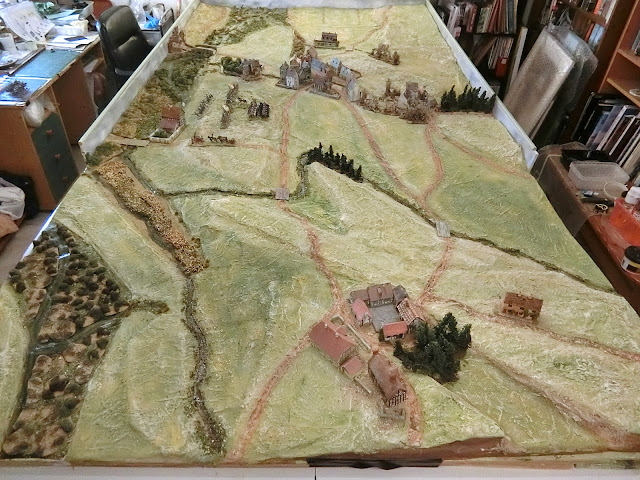 on the Merxleben Heights. It was about 2 kilometres but the account
says the Prussians bombarded the town.

I will leave you with a view of the guys well into the action on the day.
Part Two will go into more detail on the objectives, plans, orders of battle, dispositions and opening moves. 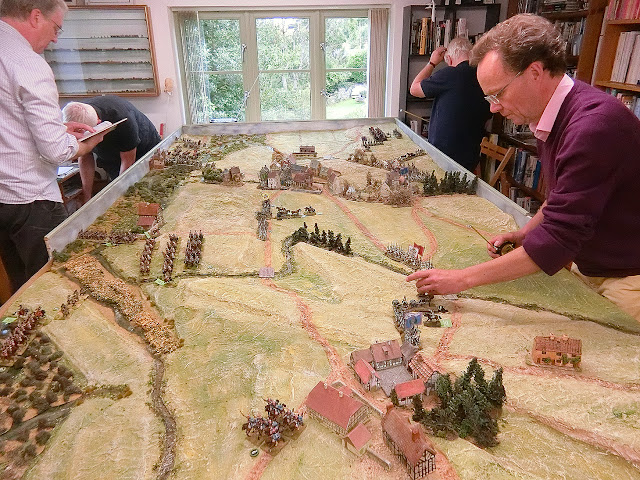 POST SCRIPT
As I write the table is a bit forlorn....no troops, no add-on scenery, the marsh foliage is all packed away. We've had 2.5 days of hectic wargaming action on it so far; I've scheduled an 18mm Napoleonic General d'Armee try-out on it in early November and I will probably do something on it with my grandson Seb at October half term holiday. However I think there is space in the schedule to fit in another modest 18th century Honours of War day-long bash in the second half of October so if anyone fancies that and can get to Oakridge Lynch between Stroud and Cirencester please get in touch and we can see if it can work.
Posted by Chris Gregg at 01:00 40 comments: