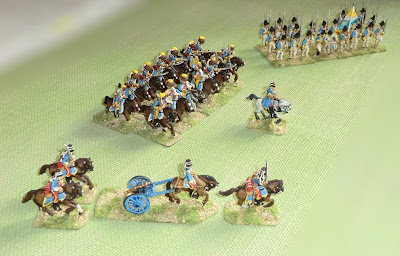 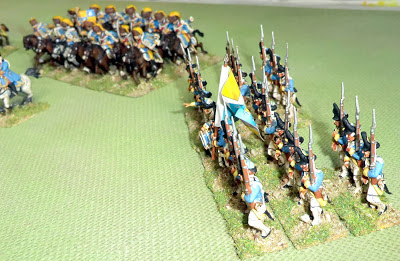 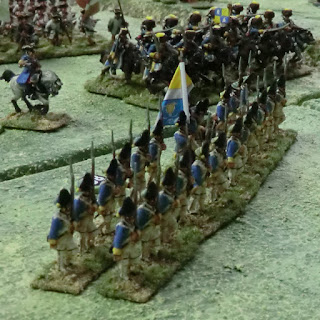 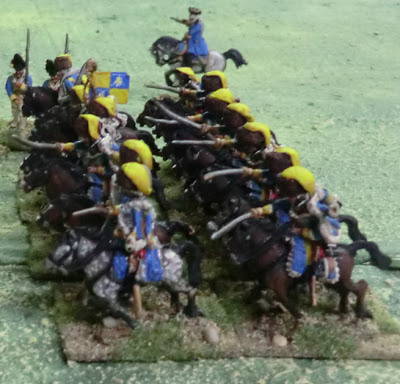 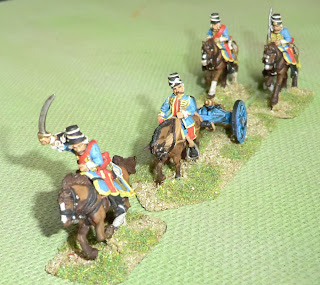 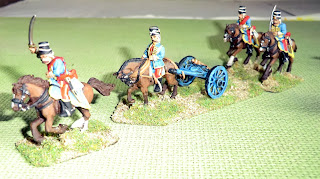 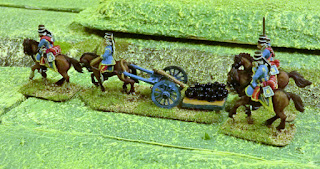 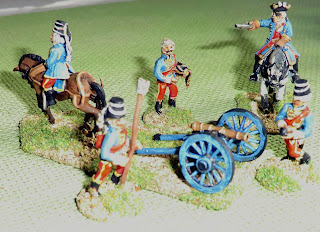 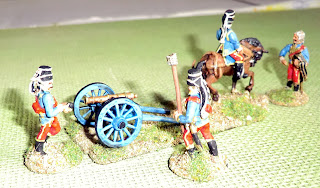 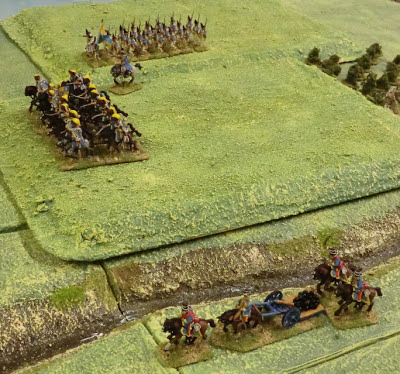 My Imagi-Nation gets its marching orders

Apologies for the long absence in postings but those who follow me will have gathered that I've had a big down sizing exercise followed by an intense period of packing, moving house and unpacking. The Duchess of Grandchamp and I eventually realized that if we were to build that "retirement" home in the Cotswolds we'd have to sell the Chateau de Grandchamp, realise our assets and use them when a suitable property came up for sale. So that's just what we are doing and in the interim and are now renting a cheap and cheerful residence in a suburb of Gloucester which is about as big as a Gatehouse compared to the Chateau! So no wargaming space but the Duchess has magnanimously granted me a room and lots of loft space to carry on my creative activities and to store the remnants of a life of art and wargaming.

The packing up process was very poignant as I resolved to put away all my 28mm 18th Century collection, together with their terrain, and not get them out again until I have built the "wargame room with a view". So the wargames table was dismantled and sawn up, some of it went to the Municipal Recycling Centre while some of it boarded the loft to make a comfy perch for all those boxes of figures, trees, buildings etc. However, I'm hoping for a more relaxed year in 2013 with very little responsibility for wargames and using my time to make a bit of money to pay the removal men, solicitors, architects, builders and so forth!!! This should mean I can do a lot better with my blog posting frequency and bring you some of the 2012 action at the Chateau which I failed to do at the time. This involved wrapping up one phase of my Reikland Campaign in a big weekend battle last April and then creating  the "Grandheim Incursion" as a weekend mini-campaign which took place in August.

I painted quite a lot of new units for these events some of which appeared on the blog about 9 - 10 months ago but now I'd like to show you a few more, and the rest of this posting is devoted to the Battenberg Regiment. 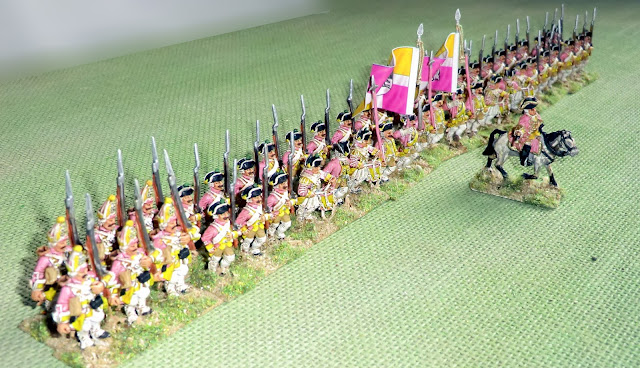 Many readers will recall that Phil Olley was selling his splendid 18th Century armies about a year ago and among them was the magnificent and unique Battenberg regiment which took it's uniform inspiration  and flags from the Battenberg cake. Apart from the lovely joke I really admired this unit and innocently asked how much Phil wanted for the 54 Front Rank figures. After I'd picked myself up off the floor I had to tell Phil it was way above my defence budget, even for an elite battalion like them. However, I cheekily asked Phil if he would mind if I recreated them myself, and he was happy to give me the go ahead.

Since my serious operation in Summer 2011 and coming face to face with my mortality I had decided to treat myself by buying unpainted 18th century  figures like there was no tomorrow. Several hundred tomorrows later I'd acquired a vast, if eclectic, mix of nationalities and manufacturers among which I could put together a standard 48 figure battalion for my Savoy versus Reikland Imagi-Nation armies resembling Phil's Battenburg Regiment. 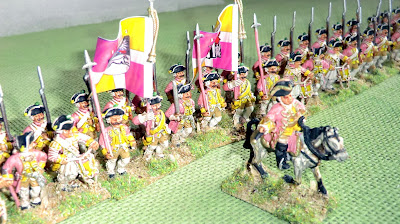 The privates are the standard Front Rank Prussian types as are the sergeants, drummers, standard bearers and officers.
The Grenadiers, however, are Foundry British Grenadiers, and very hunky and imposing they look too! 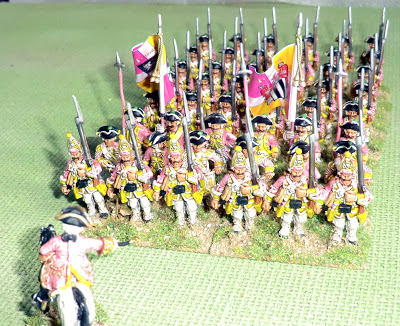 I've taken a few minor liberties with Phils' original uniform details but essentially they look much the same from a distance. He had handmade flags for his regiment though but I tend to go for computer modified and home printed versions, and Phil's only advice was to look for the Battenberg crest. Googling came up with several variations, a lot depending on the period and the current allegiance of Battenberg at the time. There was a "dog and eagle" or a knight's helm. I fancied both so how about one of each! Here are the originals after I'd worked them up how I wanted. You are welcome to use them for non-commercial purposes 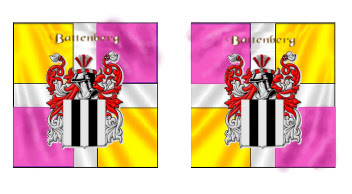 And so here are a few more photos of the Duke of Battenberg inspecting his Regiment at their various drills on the lawn of the Chateau de Grandchamp before being packed away in a box for that long cantonment in Winter Quarters in the loft. 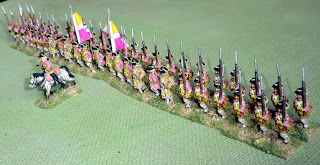 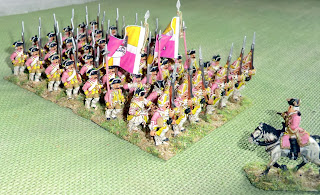 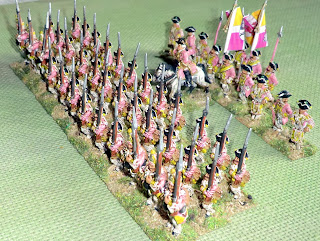 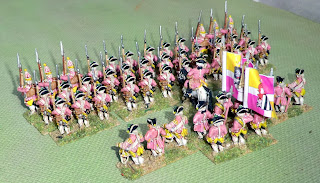 But it's important to emphasise that Battenbergers are not all fluffy confectionary soldiers, they can fight too!  In their first engagement before Delemont Ridge they formed a useful second line attack column during a fight on the road towards Grandheim and received casualties without flinching. The Duke commanded a brigade of battalions hired in the service of Savoy. In their second engagement during the attack on the Alte Bruche at Grandheim they were in the forefront of the Duke de Deuxchevaux's major left flank sweep. They took on all comers from Reikland Infantry to Austrian Cuirassiers and were depleted to only quarter of their strength, the Duke of Battenberg having taken a severe wound, before retreating, under protest, from the field (as required by the "Wigs and Wine"rules). So here they are with some French colleagues, about to take the surrender of the remnants of one of Count Greggorius' line regiments. 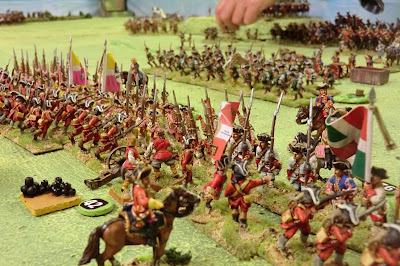 In the next posting, another group of units taking their leave, and they will be something for the Light Blue uniform fans.