A variation on "Quickshade" paint jobs

I've occasionally been asked about how I use Army Painter Quickshade and also how I do figure bases. There is no easy answer since, to me, all forms of art can be an adventure in which you might know where you'd like to go but not necessarily how the route will work out to get there.

But recently I acquired a nice batch of  30 Perry designed Foundry Miniatures 20mm World War Two Germans and, as these figures are so good I thought painting them slightly differently to usual could be a good relaxation and diversion from my two-dimensional art. Also I think the German uniform of the early war period was pretty cool even if the motives of the soldiers inside them might have been questionable. Just as a taster here is a photo of the finished result with a squad of Landsers advancing across my back garden on a sunny day. 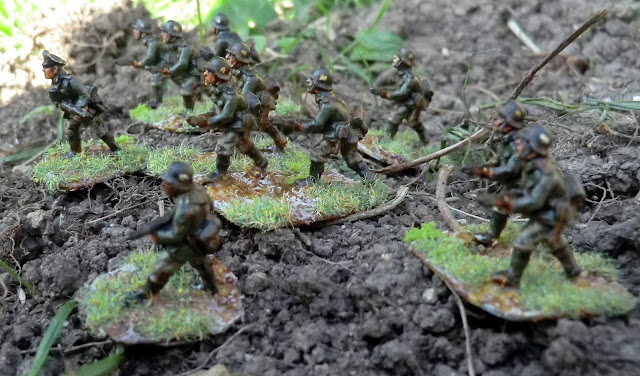 I prefer low profile bases so the family is now well used to me asking for out of date credit cards, plastic store cards or membership cards and the like and I find them strong and easy to cut but don't interfere with the aesthetic value of the figures as they are so thin. I clean up the figures, not that there was much "flash" on these, and then glue them to the bases I had cut ready. This makes them easy to handle and it was a short step to spray the whole lot in one thorough coat of a basic grey. This acts as undercoat and  basic uniform colour but will be mostly covered. I used "Carplan" Grey primer from a local motor parts store.

Now here is where I used my Army Painter Quickshade, dark tone, not at the end of the process but the beginning. Happily I was near the very end of a tin and, I guess for some technical reason, the Quickshade dried matt instead of the glossy you may be used to. I put it on with an old brush, not the dipping and shaking method the manufacturers recommend. As I hoped, when dry, it picked out all the lovely sculpted detail a treat, and would also act like black undercoat for outlining but without concealing the detail from me while I painted.
Here are some of them at this stage 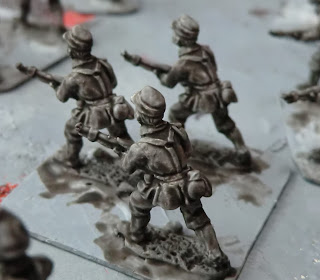 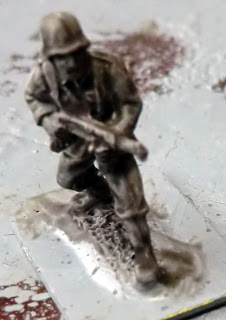 The actual painting technique would involve a few careful strokes of colour, mostly on the highlight folds and leaving as much of the dark folds as appropriate. This was done on the trousers with Games Workshop (GW) Fortress Grey........ 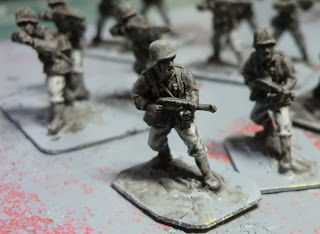 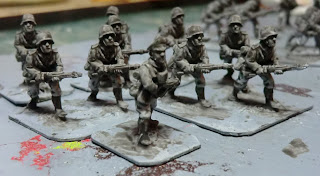 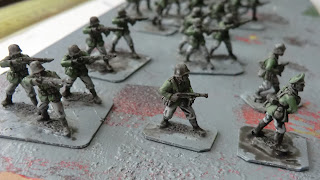 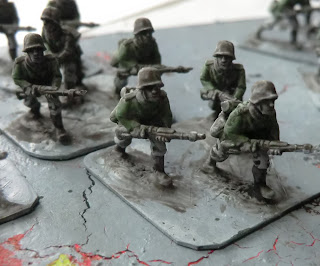 You may well be thinking that this makes the main clothing seem too light but, never fear, that will be rectified later in the process. For the same reason I did not use black for helmet, boots and gun barrels but GW Charadon Granite which is a very dark grey. Similarly though it was only on main highlight areas.  The next photos also show flesh and brown and black for rifles, straps, bread bags etc. 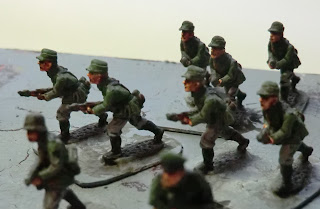 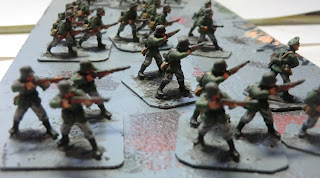 I did the flesh my usual way which is a coat of GW Elf Flesh washed when dry with a diluted solution of  GW Flesh Wash (now called Ogryn Flesh wash).

Once the figures were entirely painted, including fine detail like collar patches and shield motifs on helmets, it was time to landscape the bases. Where I want a particularly good effect I use Winsor and Newton Acrylic Structure Gel as this can be applied with a brush and fills up the spaces between the metal figure bases. It can also be manipulated and textured to some extent and then dries hard to give ruts and puddles etc. I mixed GW Ivanden Dark Sun  (a kind of yellow ochre) and a small amount of fine sawdust with it so that saves another step. Again it's a bit bright but that can be dealt with. 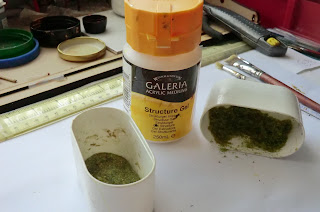 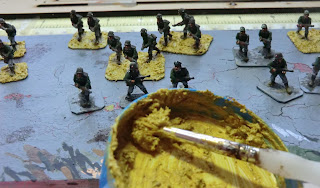 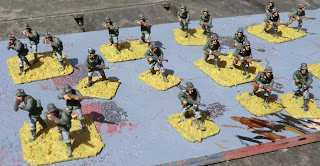 Now comes the really interesting bit. It was my artistic friend Terry Preen (see his guest page in right side bar) who introduced me to the radical idea that you don't need to buy Army Painter Quickshade at £18 a pot or whatever it costs now, but you can use various wood stain varnishes available at your local DIY store. Although I do like the effect of Army Painter products, especially for Horse and Musket period uniforms, for a good overall "drab" effect ideal for WW2, I found B&Q Antique Pine Satin Quick Dry Varnish. It is water based and dries within an hour leaving brown in the folds and a very slight brown film over the rest of the figure. If you don't want the latter then quickly wipe it off the highlights with a tissue or a  clean brush while it's wet. On these figures the effect was to darken the uniform and create interesting puddles of dark shadow in the texture of the base colour/texture. 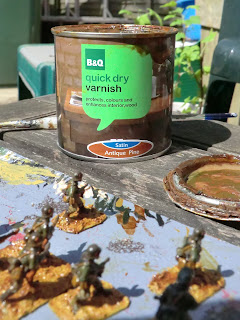 This is "muddy" when you put it on but does dry clear with a highly glossy finish that actually makes them feel  satisfyingly protected from whatever the wargame battlefield can throw at them "Take cover! incoming dice!!!" 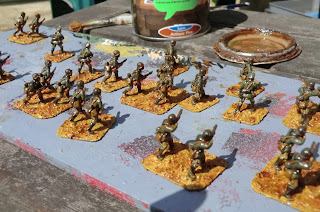 I next decided that I needed to give the bases a highlight with GW Bleached Bone.

Obviously this is now getting into the territory of personal taste and, for WW2, leaving the bases like this would probably have wider deployment possibilities but I think it looks a bit depressing so prefer to cheer them up with some touches of green. I just use small patches of PVA glue and dip into a pot of Spring or Summer effect imitation grass and then the odd dab of a rubberised fine clumping to look like weeds.

Finally it was time to give them a good coat of Matt Spray varnish as this obviously reduces the glossy shine to a  more realistic look but also ensures the grass effects get a durable bonding on the bases. (Remember to shake the can really, really well to get the matt finish)

If you'd like to see several images of the final effects please see these items for sale on Ebay.
German infantry on Ebay

And if you've found this interesting or instructive please leave your comments. thanks