If you need a reminder here is a link to the problem.

<<Hi everyone,
It has been some time since our last time, during which we've been in constant contact with the people in Royal Mail's Dangerous Goods Support team. There was another senior meeting at Royal Mail, held in late February, where the policy was discussed. As before, unfortunately they have decided against any changes to it at this time.
As yet, we have also not received any answers to the questions we have posed, regarding how Parcel Force can send 'potentially damaging' items and Royal Mail can't; what statistics they have to show that paints are more likely to break in transit than other fluids; and why alcohol can be shipped as a 'decision on a business level' yet paint can't.
In an effort to get some answers to those questions, we have contacted several other Royal Mail departments, in the hope that someone somewhere can provide logical reasons for all of this.
We are also going to be contacting several MEP's as this restriction is harming trade between many EU countries. We are hoping that this will push the issue further, and help us achieve a favourable change to the policy.
Thanks again for your continued support, and don't forget to join our Facebook group: Facebook - PostOurPaint or follow us on Twitter: https://twitter.com/PostOurPaint @PostOurPaint
Cheers,
Leon

When I started blogging about our rather eccentric Waterloo project last Autumn little did I know that only two miles up the road my progress was being watched.......... Mark Freeman had just embarked on his "mid-life crisis" to recreate the fun of youthful modelling and was enjoying collecting 1/72 scale plastic Waterloo figures and making a diorama of parts of Waterloo in lots of manageable-sized sections.  He was looking to my blog for inspiration and modelling tips and got in touch with me. Over  the intervening months I've enjoyed his company and considerable enthusiasm and am gently encouraging him to try his hand at wargaming. His Waterloo model is coming on nicely but Mark is already exhibiting that common wargamerly trait of "butterfly" concentration. Not long ago he started modelling World War Two...again I gave him a bit of advice and  before I really noticed he'd come up with a camera phone snapshot of his one-off model inspired by the Omaha beach landings on 6th June 1944.  I was so impressed I got him round for a more considered photo shoot in my lounge.
Here is one view and for many more photos and Mark's own words please see the Pages side bar at the right for the Mark Freeman Guest Page 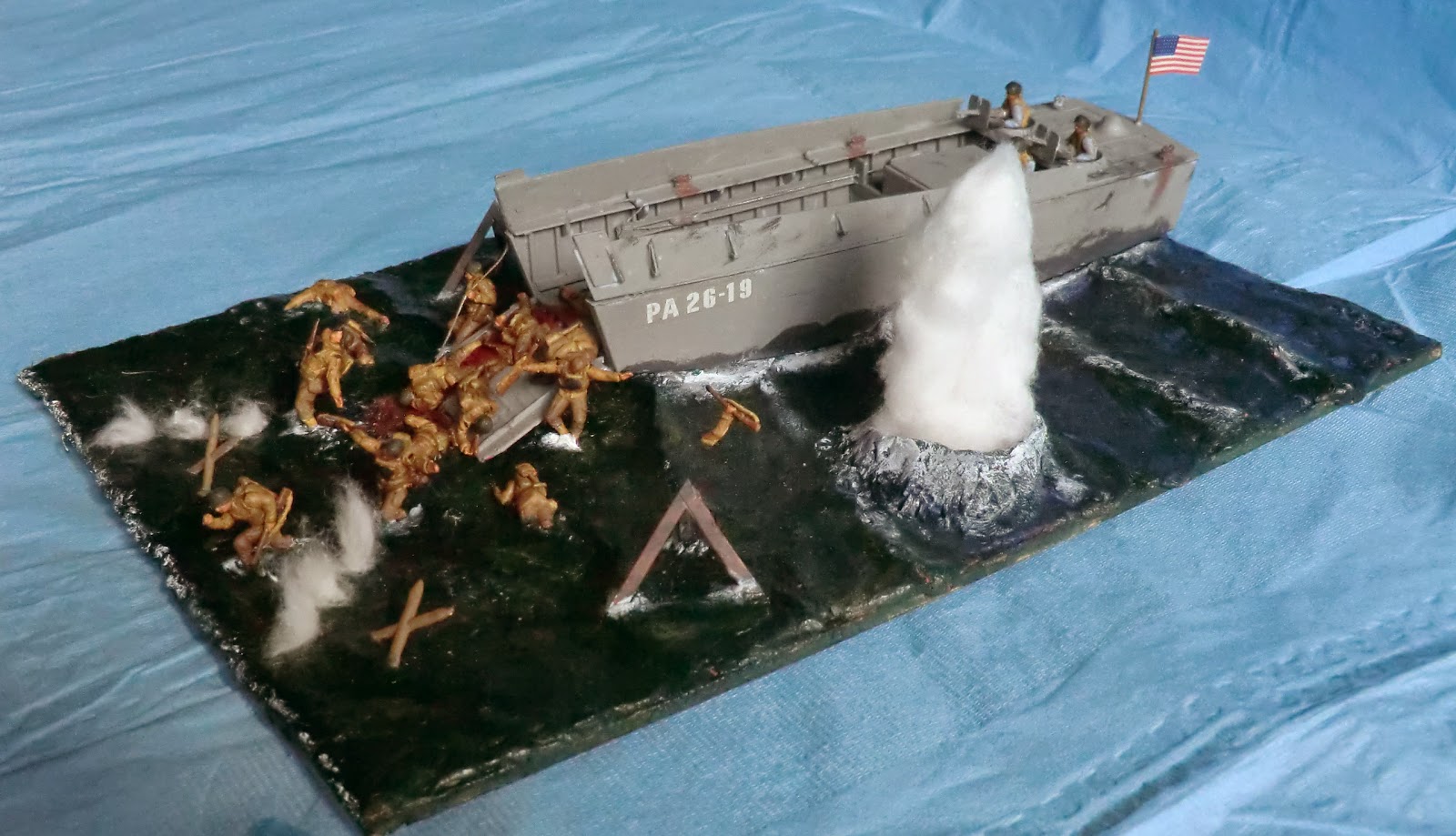