The Battle of Madling 1753: Part One - Introduction and making the battlefield

In the previous post I outlined three weekend games we have planned here at my humble Cotswold retreat. The first one was to be Wiltshire's Ken Marshall organising the next episode of his Imagi-nations campaign between the mid-German forces of "The Electorate" (a bit like Prussians and Hessians) against the equally formidable "Ducal" armies (white coated Austrian types with Hanoverian style allies), and we had now advanced to October 1753.  I decided we would use the standard 8 foot x 6 foot table and my contribution would be custom sculpting whatever terrain Ken wanted.  The date for the game was set for 23-24th April and we ended up with 3 other players and me, with Ken as umpire, on the Saturday to play out a fight for territory between the two substantial Advance Guards. The Sunday brought two new players and the main armies to try to decide the issue.

I was amazed how Ken's collection of Minden/Crann Tara/Fife and Drum 28mm figures had grown - to about 1600-1800 figures I think. In addition we called on a few hundred of mine and about 400 - 500 from Paul B of Cheltenham.  I was worried this would be too many for the table but Ken felt confident a lot would be overcome by attrition on the first day, nevertheless he had to ensure some substantial forces for the newcomers to command on Day Two. As those two were "Honours of War" creator Keith Flint and his play tester Steve Johnson, we wanted to put on a good display.  So you will have to forgive the toy soldier megalomania which made manoeuvring room at a premium but wargames eye candy at the maximum. I hope you agree - here is a glimpse of what is to come:

Anyway, much more of that later, this post is mainly about making the battlefield and a basic intro to the game.

For those who have lamented the demise of my previous "art installation" terrains, don't worry, not much goes to the local tip, most of it is recovered and reused in different guises. I will start off with some photos of dismantling the previous Langensalza terrain in January. 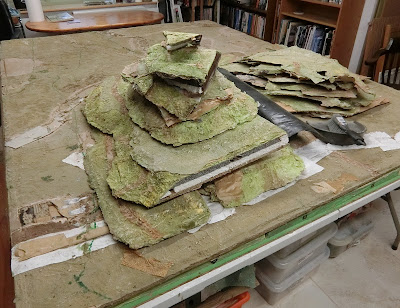 Creating the battlefield for the Battle of Madling

Here is a look at Ken's sketch map which he sent me as a starting point, together with a description of the kind of terrain he envisaged 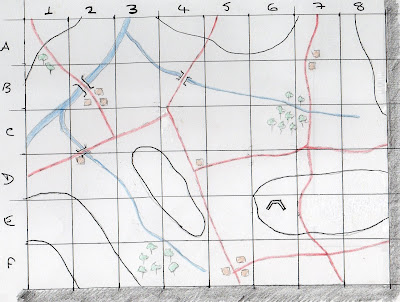 And this is the version I made of it in Adobe Photoshop to use as my scale guide for the build. (I don't have the full pro version but I find Photoshop Elements 2020 is adequate for my needs and affordable to buy).

I will describe the stages in making the table from start to finish by photo captions. Most of the methods will be familiar to my regular readers and apologies if I bore you. However, towards  the final stages I did things a bit  differently. 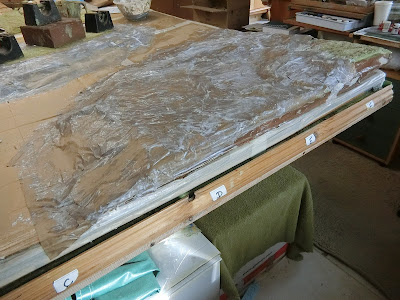 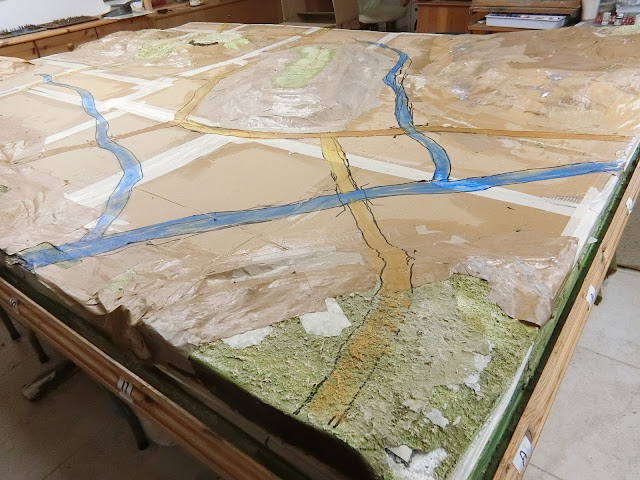 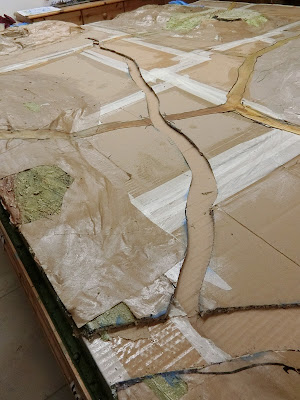 Looking round the finished battlefield

The above sequence is effectively the end of the "how-to" part as I seem to have got carried away with finishing the detail and adding the woods and buildings and have not taken any specific build photos. So what follows is a look at certain parts that might be of interest and then the overall effect. 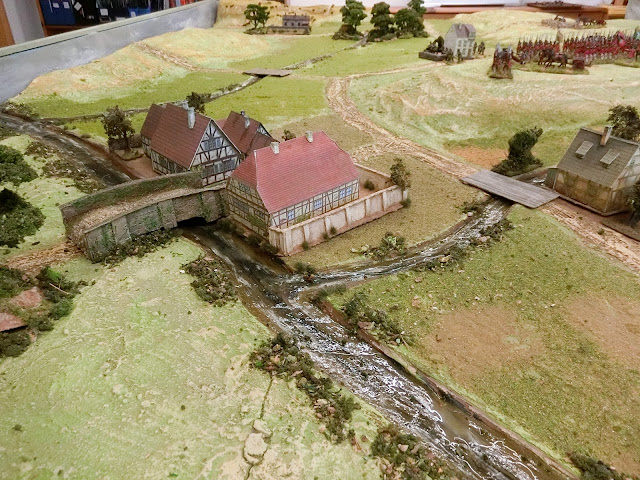 I wanted to give the players an idea of how big the units are before the day to help their planning. So the following is a further look round in the company of my small, but growing, Hanoverian army. 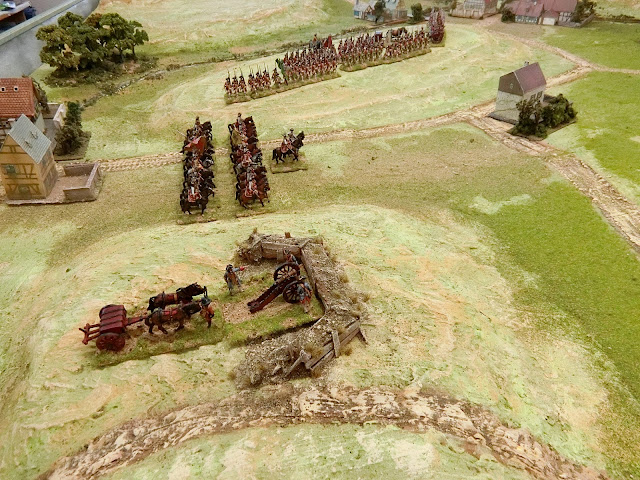 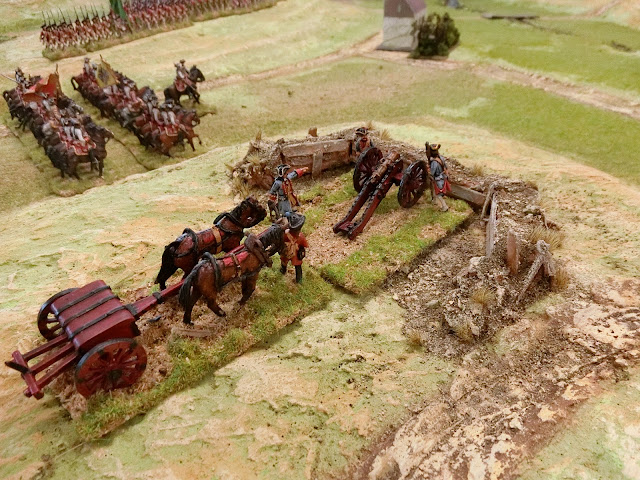 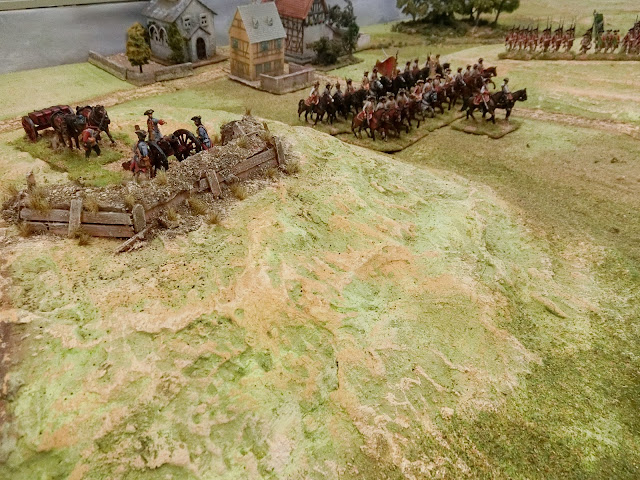 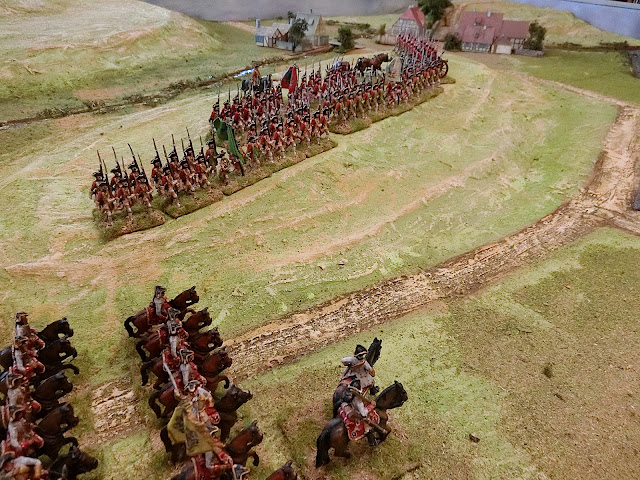 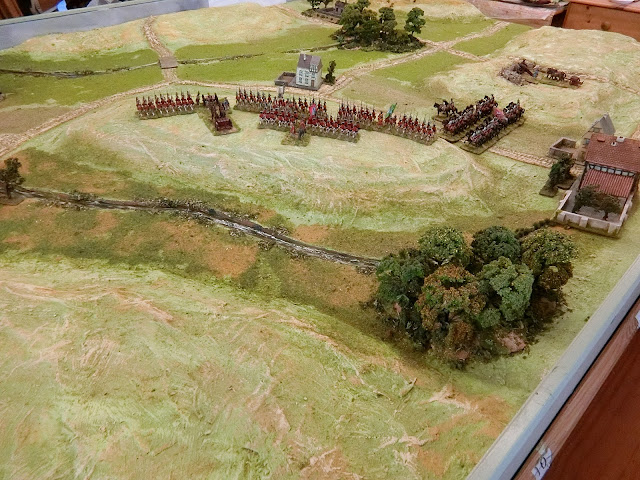 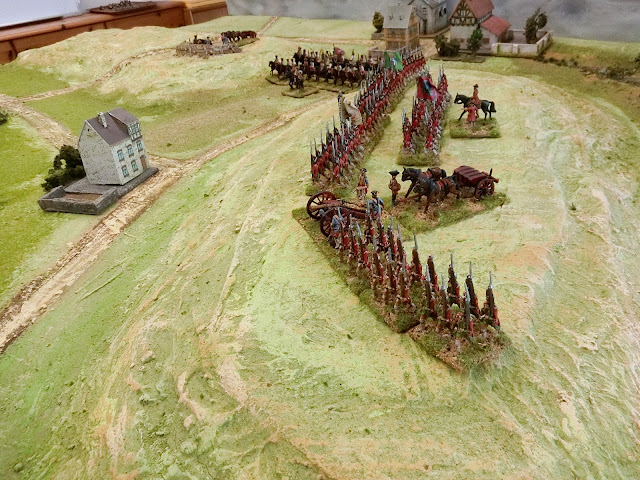 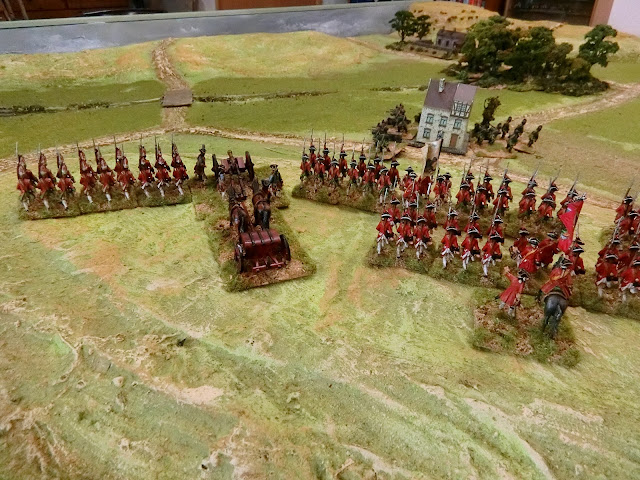 I will finish off by giving you a taste of Ken's Imagi-nation campaign. We pick up after the battle of Stadl an der Mur

"1753 – The Elector has tired of the long period of peace between the electorate and the Grand Duchy. Whilst it has been useful in allowing him time to rebuild and train his army, the time has come to further his territorial ambitions by seizing the Mur valley from the Duke.

The annexation wasn’t as easy as the Elector expected. The Ducal army reacted swiftly to the invasion and successfully halted the electoral advance before Tamsweg. The campaign has degenerated into a war of outposts as the two armies struggle to gain an advantage and the fear of failure overcomes any martial ambition or initiative by the two commanding generals.

An attempt last month to outflank the Ducal forces at Stadl failed and the appearance of unidentified foreign regiments at that battle confirmed intelligence that the Duke was being supported by a coalition of neighbouring states who have also suffered from the Elector’s military ambitions. Although coalition forces have not been committed to the fight anywhere else, it can only be a matter of time and the army is likely to find itself heavily outnumbered.

The Elector’s generals now await the arrival of winter and an end to the campaigning season that will allow them to consolidate on their gains in preparation for a resumption of the campaign next year.

The message from the Elector is clear. There can be no more failure after the Stadl debacle. The army will not give ground and lose the territorial gains made. Several of the generals whose performance particularly displeased him at Stadl are now residing in the Electoral prison at Oldenburg and he has made it known that there is plenty of room for more to join them. "

In outline  - The Electoral Commander, von Stuttenheim is defending everything to the East of the Stronbach. He only has two brigades of mixed light troops at the start and the Ducal Advance Guard is expected to arrive from the Northern baseline...............

Steve and Kevin conceal most of their defending troops ......not much to see 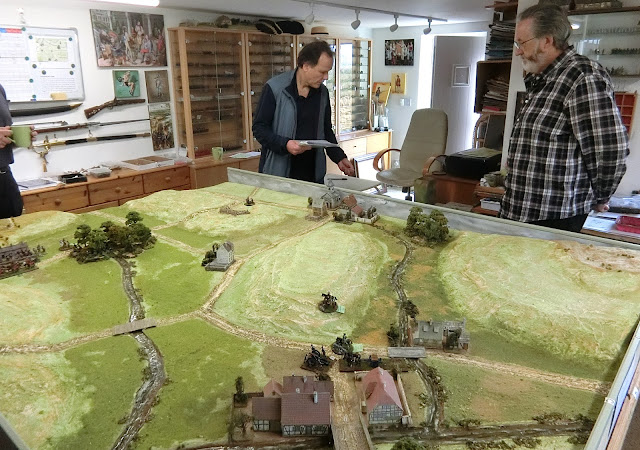 ......until Paul's Ducal Hussars and Grenzers hit Lunzen farm like lightning and the defenders are revealed. 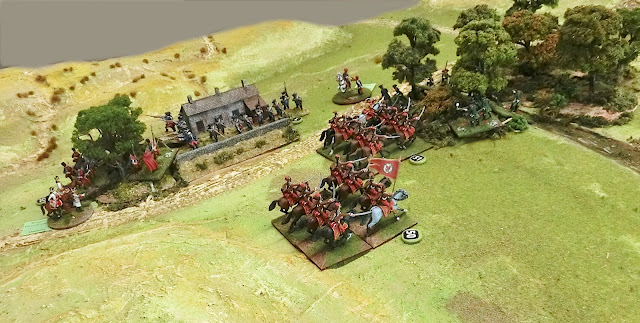