I commented on Chris’ blog that the scenario in the painting  now a naval painting would make a good game and over the weekend I tried it out with my coastal forces and rules based on Stuart Asquith’s WWII naval rules. It was a great game – thanks for the inspiration Chris.
Here is the narrative, with photos: 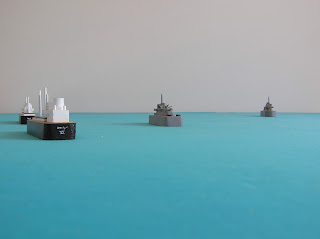 As the attacker D-44 approached the convoy 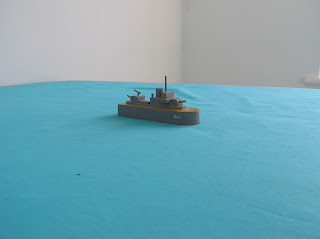 the two freighters turned away and the escort F-69 turned towards the enemy vessel. 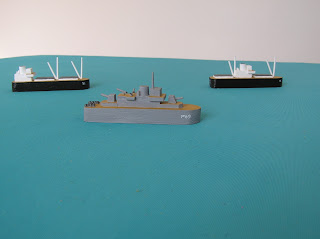 D-44s gunnery was very poor which allowed F-69 to turn allowing all guns to bear, damaging the attacking vessel and reducing its speed. With his vessel badly hit the captain of D-44 turned away and launched a spread of torpedoes at F-69 which continued to batter the enemy, jamming it’s rudder in a starboard turn and knocking out most of its guns but only after taking several hits in return. 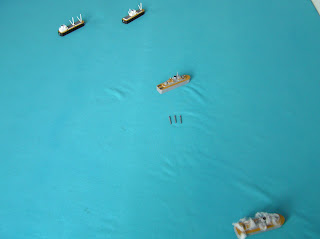 D-44 tried to limp away but F-69 continued to pound her until, inevitably, she was sunk. Shortly afterwards there were two explosions on the rearmost freighter as two of D-44s three “fish” found a target having narrowly missed F-69. Thus the crew of the freighter also had to take to their boats. 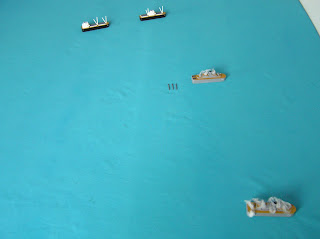 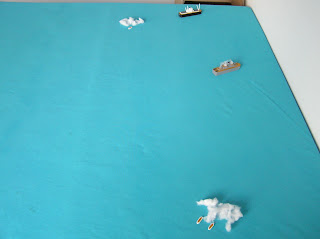 It was a fun game and as frequently seems to happen, torpedoes are fired, miss their intended target but are undetected and hit a subsequent “target of opportunity”. Ships must detect the torpedoes before they can try to avoid them – not an easy thing to do.
The ships are my balsa and matchstick scratchbuilds in a “cartoon” type representation of general WWII types, not as polished as the skytrex 1/600 maybe but still give a good game.
Hope you enjoy
All the best
Ian