Some readers may know I make models to order. Recently I got into a discussion on the "A Military Gentleman" Forum concerning windmill models and showed some of my previously sold models. I was fortunate to get a commission from a Forum member and made a small batch, all very different, of which I have one remaining.
It's quite large and is typical of the style common in Belgium, Netherlands and North/Central Europe. Ideal for any 25mm - 30mm scale wargames set in that region from 17th Century up to mid 20th. Here are some some photos, using some of Kevin East's fabulously painted Napoleonic figures to set it off. 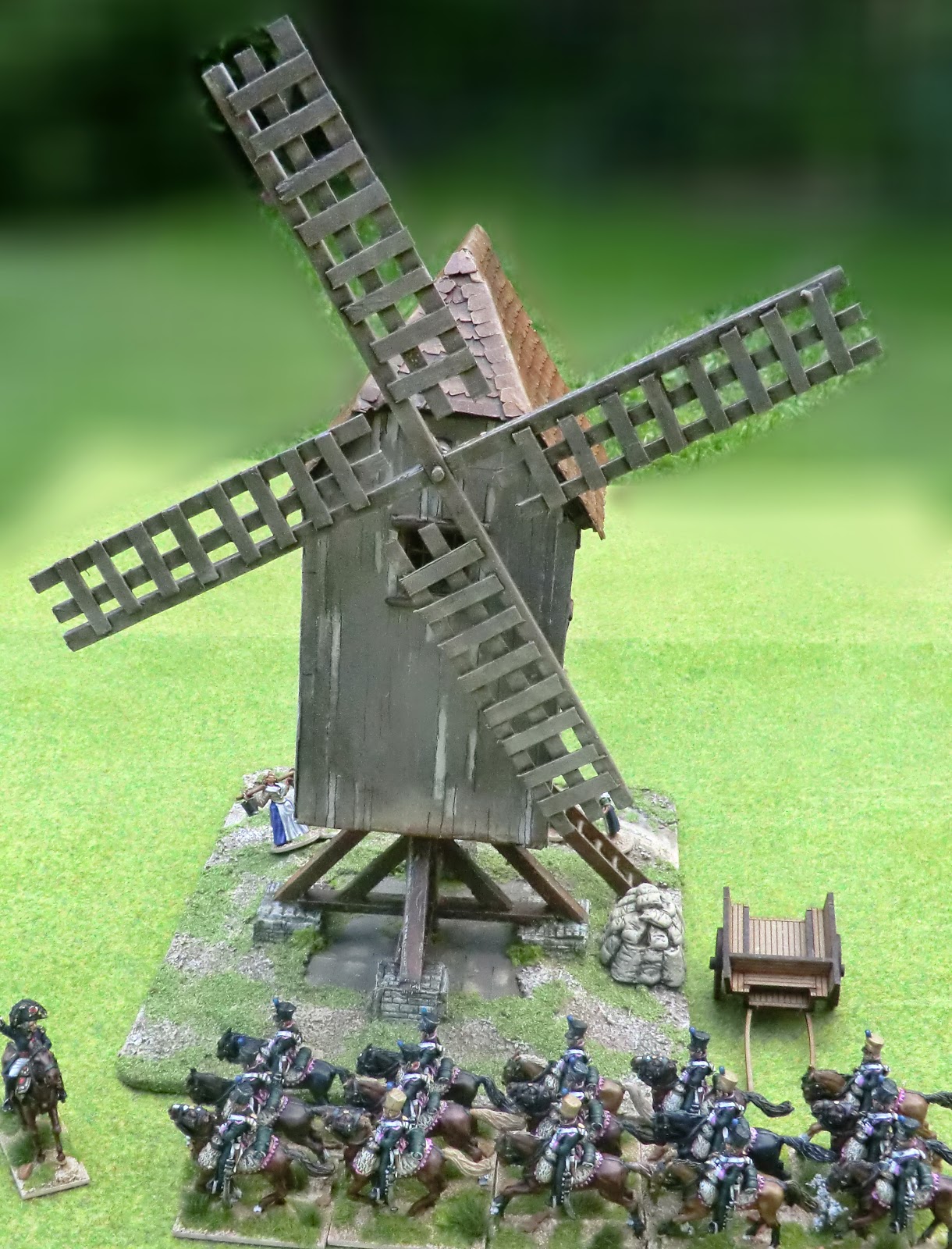 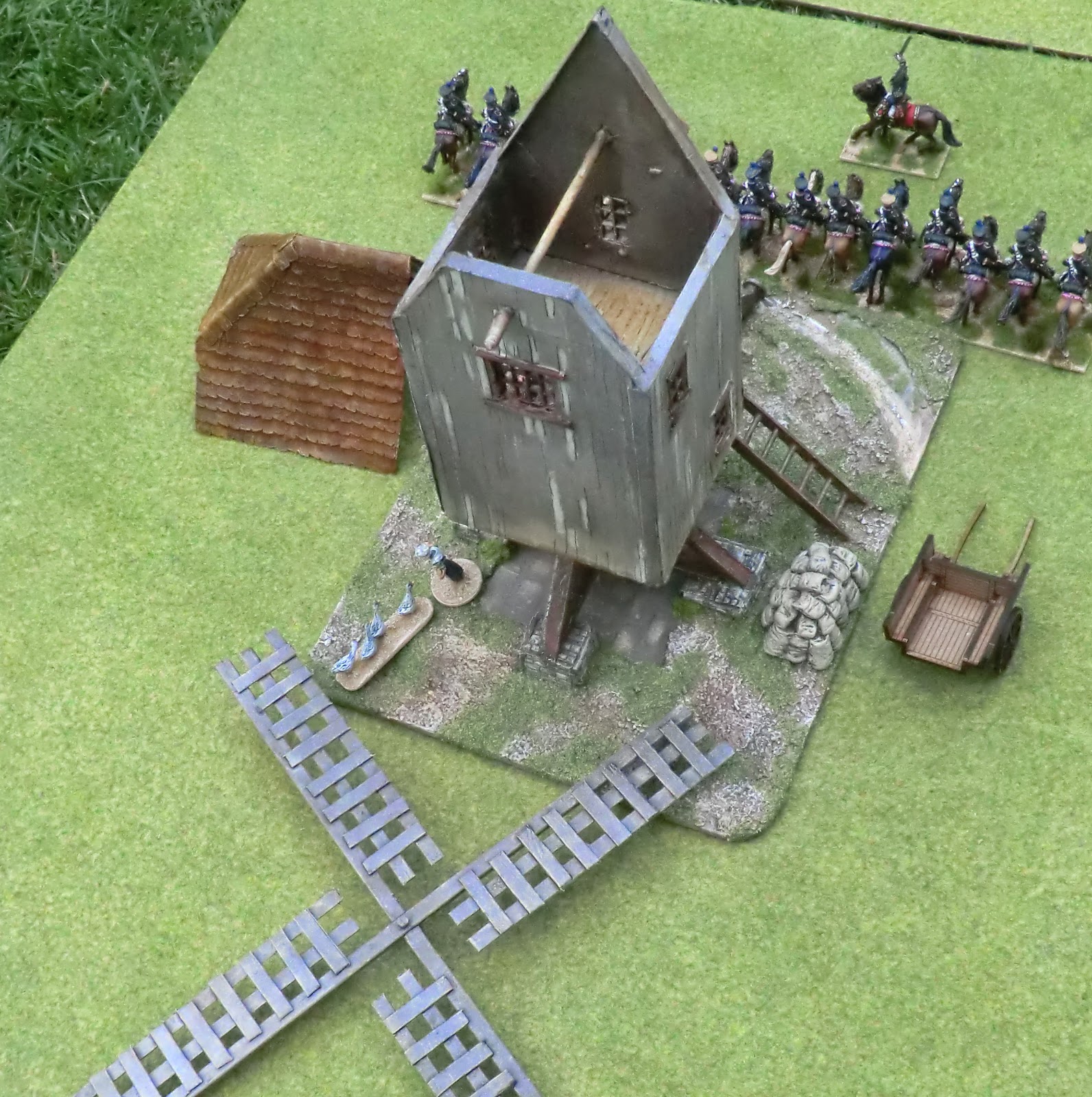 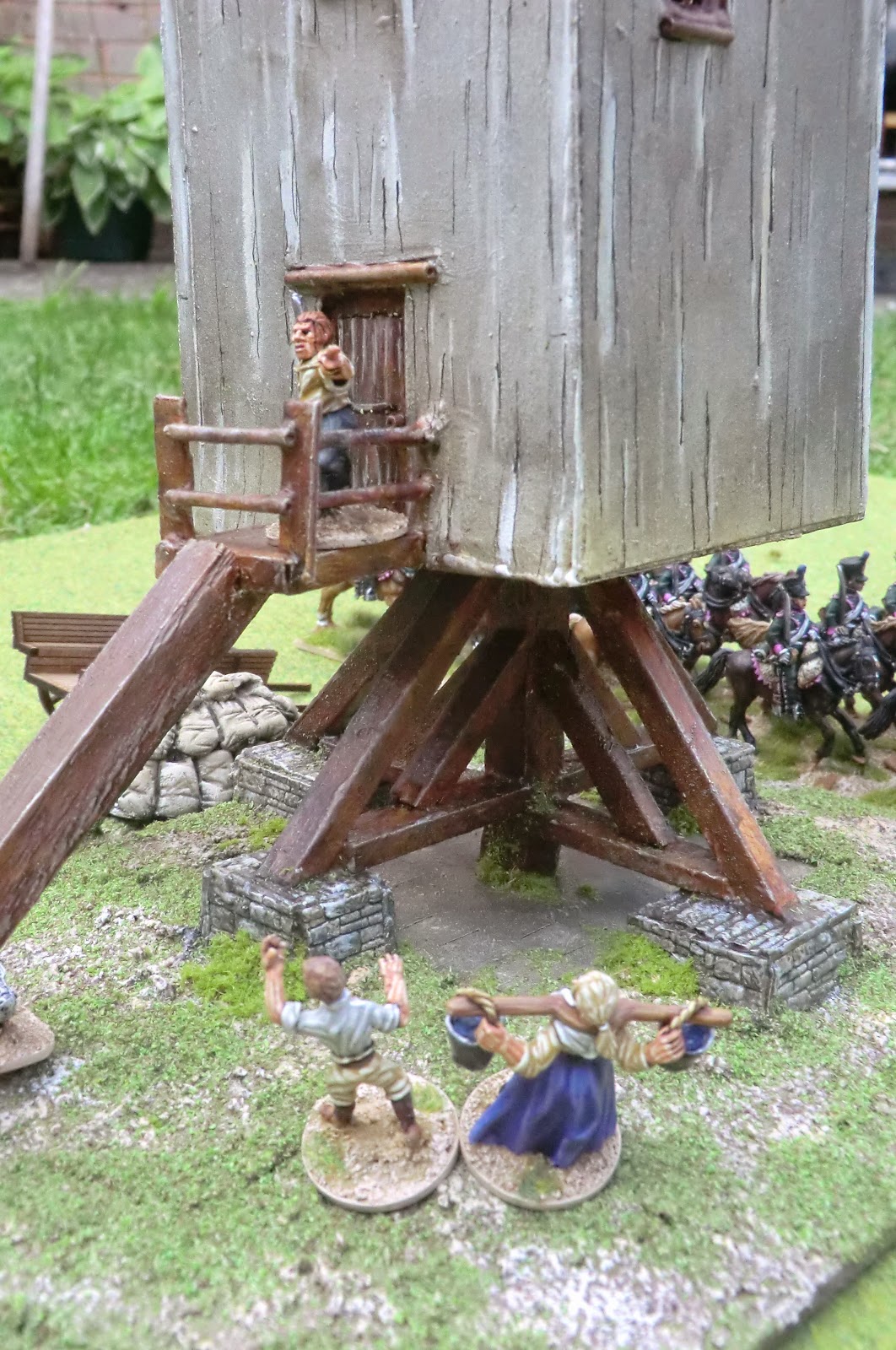 If you want to see more photos and measurements of this, and details of the other two recent windmills (now sold) please have a look at my Download sidebar   windmill models

I've made cryptic reference in previous posts to working on rules for our madness of refighting the actions around La Haye Sainte and Hougoumont in 1:3 scale next year. I drafted a set of rules, appropriately entitled With MacDonell and Baring, 1815 (WMaB for short), back in April but it took us till 17th June to assemble the gamers and a venue. In fact I had to have it at my present abode, commandeering the sitting room while the Duchess was away for the day and so the terrain is just cobbled together to make a space 6 feet x 6 feet 6 inches with a couple of gentle slopes made of basic boards and books covered in suitable green material. It's nothing like I hope to have for the real games, twice the size. Four of our 6 project members contributed - Kevin East took the French, and Richard Newcombe and James Fergusson the British, plus me umpiring. Being a rules test it was not so much a game more like "three blokes pushing around 1000 figures and talking a lot"! Consequently we didn't get any other result than a feel for handling such big units and the opportunity for healthy criticism of my rule writing.

The new frontispiece (above) for my blog gives you an idea of the spectacle when viewed from "mounted commander" level and this posting contains many photos of figures you'll have seen showcased on this blog since last Autumn, most in action for the first time. 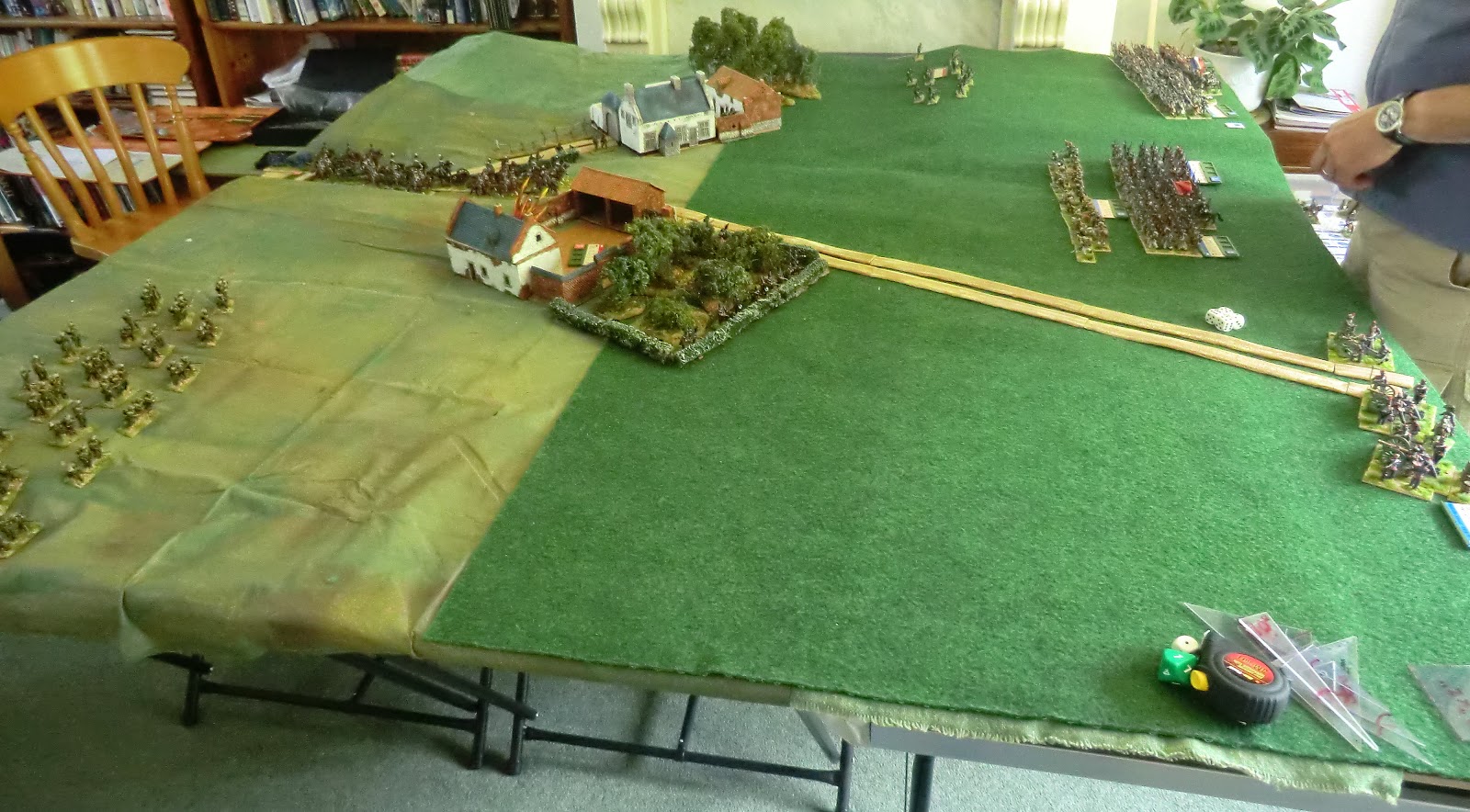 My first photo shows the simple terrain - no it's not meant to be part of Waterloo but just containing some elements we will need - walled farms, hedges, orchard, woodland and slopes. The Allies had three companies of 95th Rifles on the table to start with, holding the far wood and both farms including the near orchard. the French brought on two battalions and a Horse Artillery battery deployed across the road. The allies reinforced with a similar battery deploying between the farms, and a large company of Nassau Voltigeurs on the right flank. 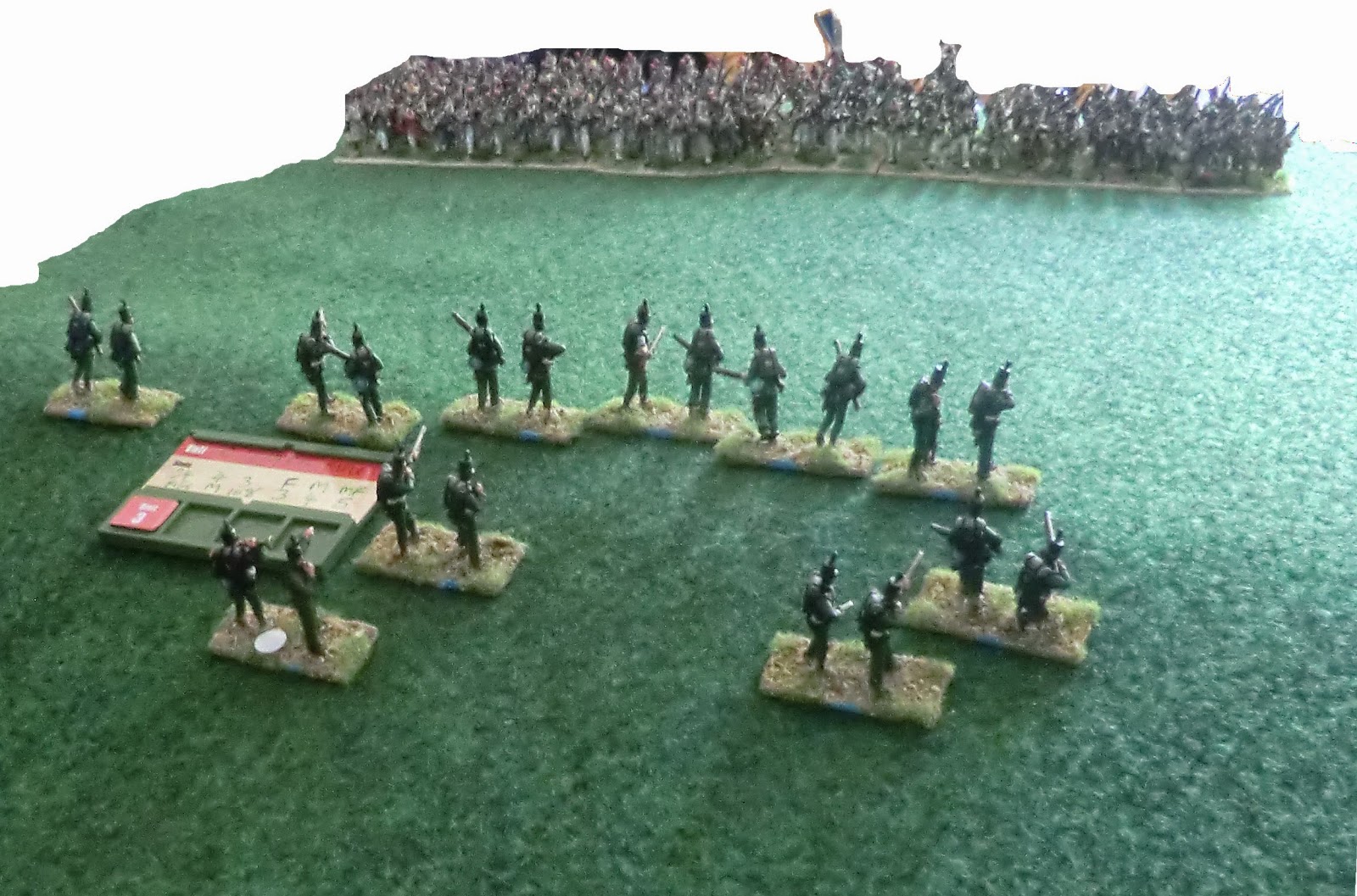 Testing the skirmisher rules James quickly advanced a company of Rifles from the wood to what is pretty close range on this scale.

Another French Battalion, this one has skirmishers out front . 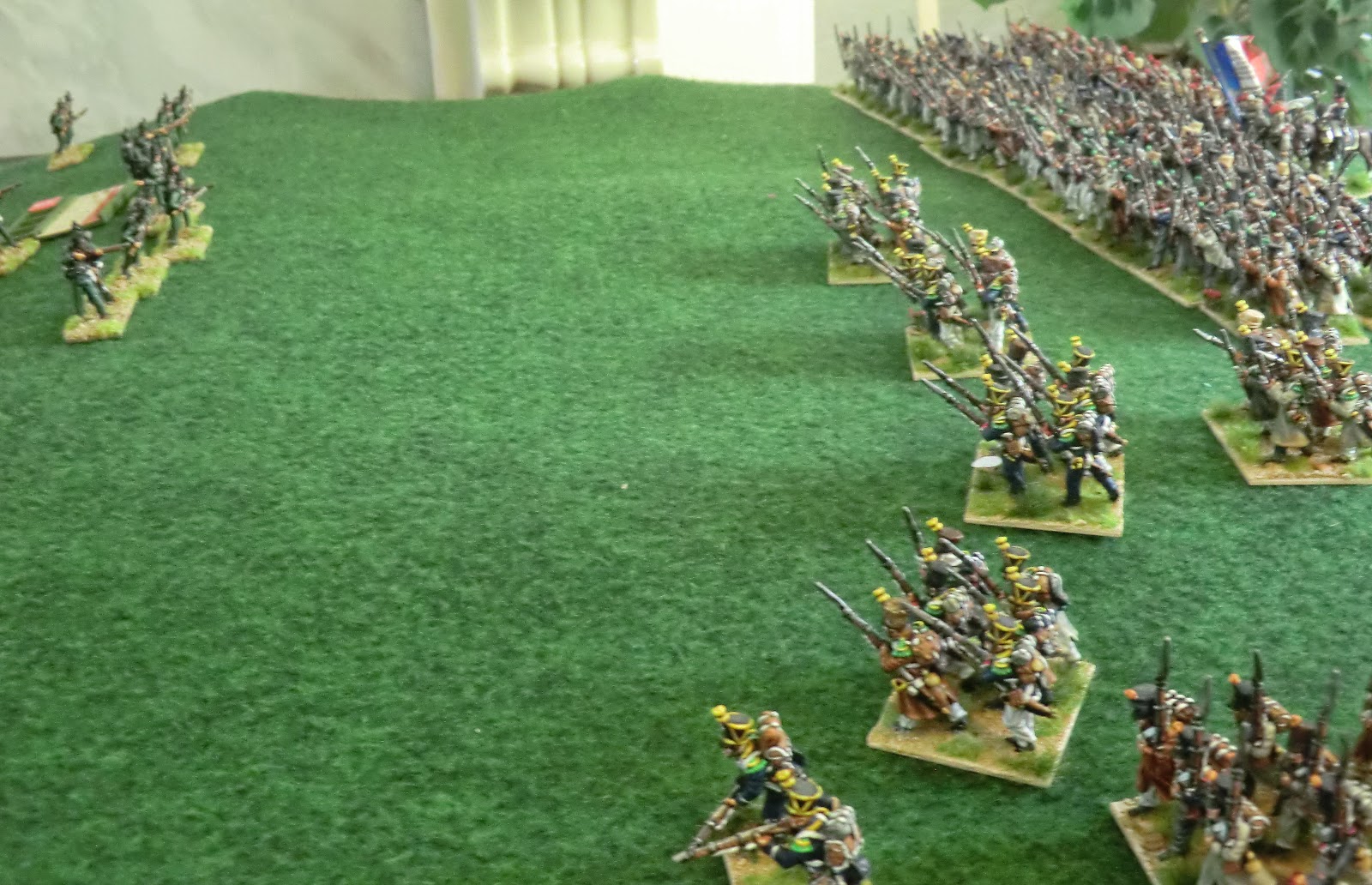 The first French battalion throws out its Voltigeur company and the Rifles cheekily fire and retreat having taken a satisfying toll on the main column. 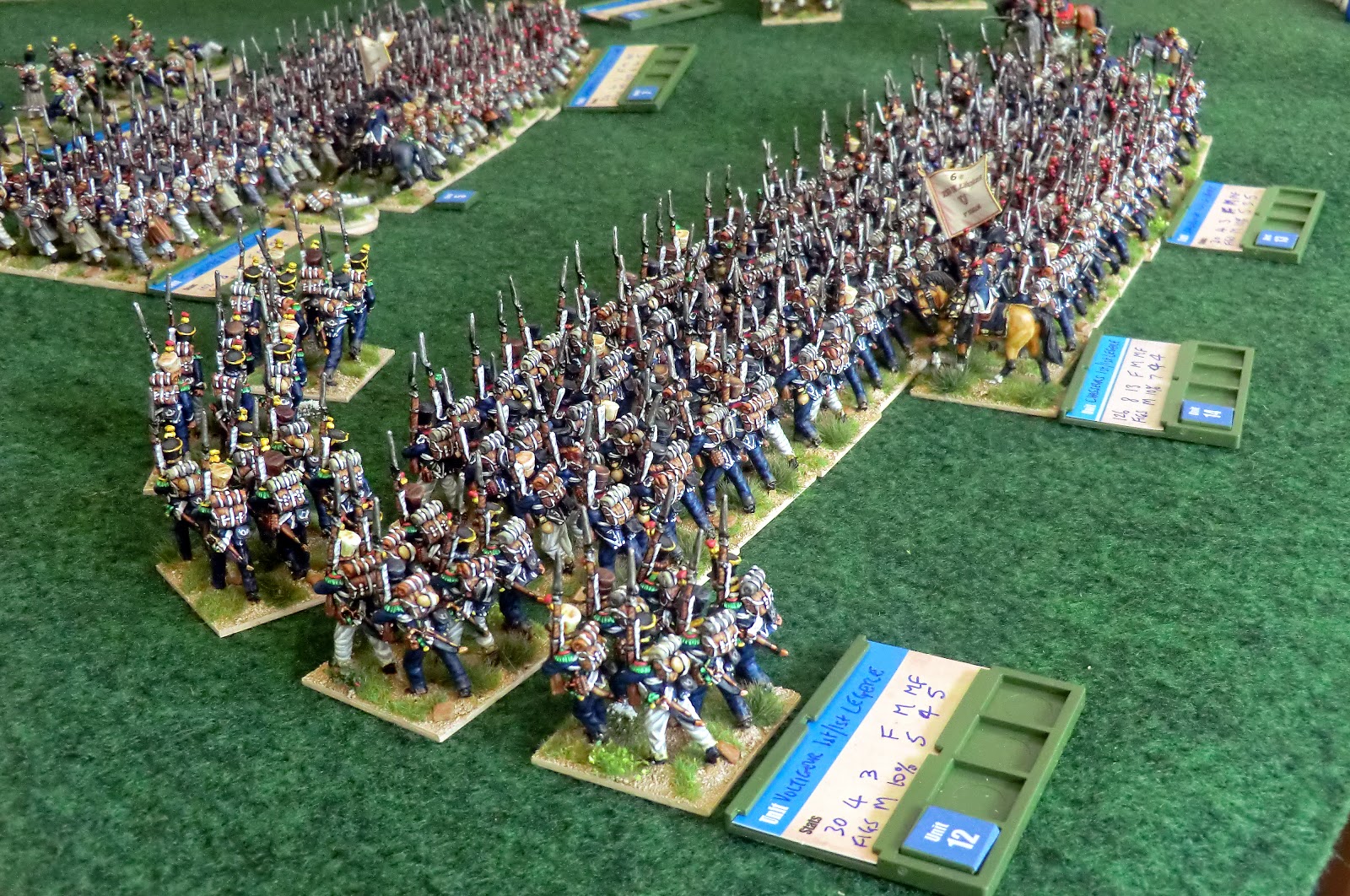 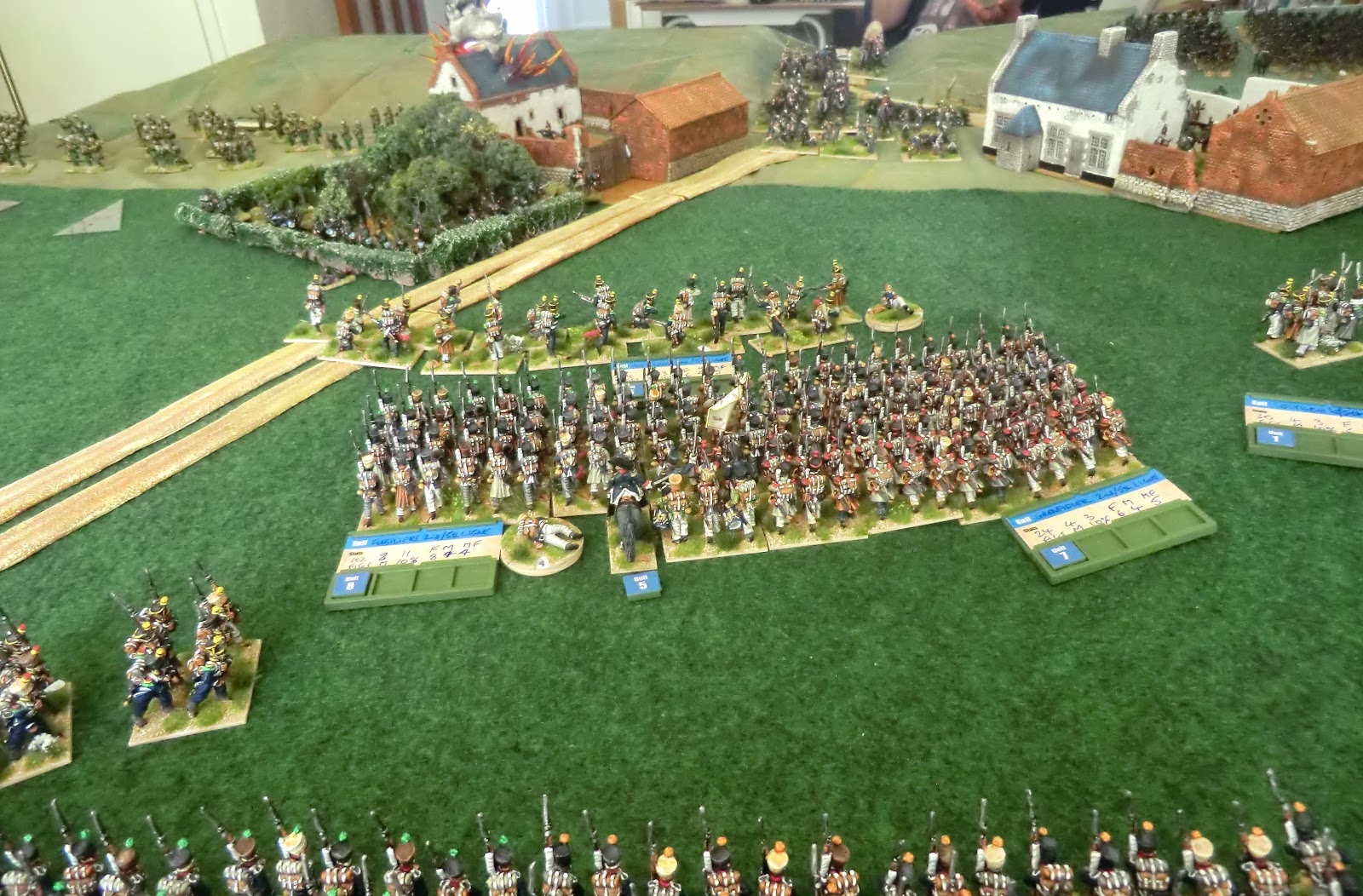 A wider view shows the front battalion attacking a farm where Riflemen are lining the hedge and RHA give them some canister (not effectively enough - we changed the rules later). The farm had already been set on fire by French artillery fire.

On the Allied left flank James now brought on the 2nd Light Battalion KGL. Although a rifle-armed light unit I organised them in two wings of three companies each for this game. 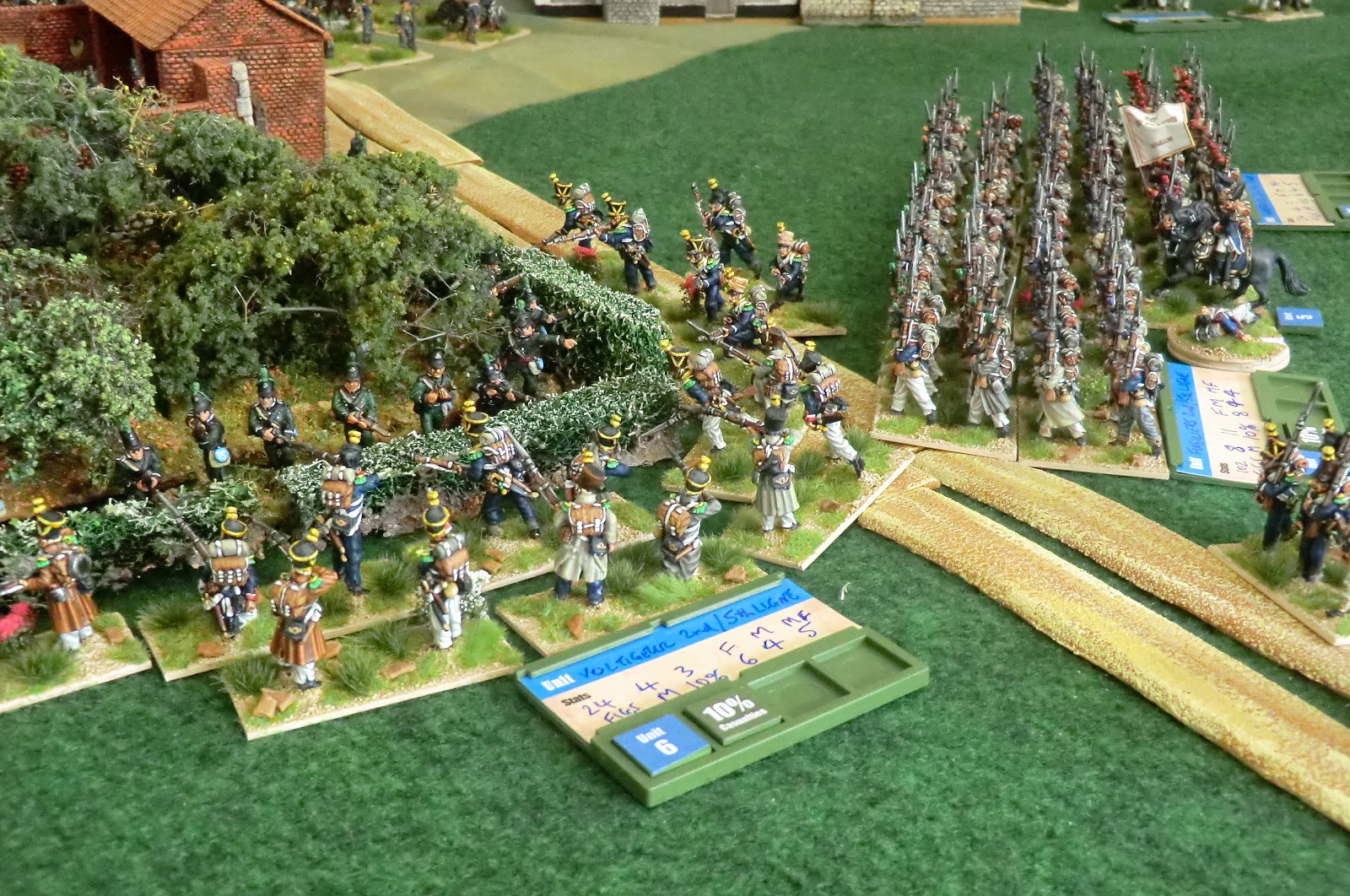 Although the rules don't favour skirmish troops in melee Kevin thought it worth his Voltigeur company trying to force the hedge from the Riflemen. At first it was a stalemate.

Allied reinforcements on Richard's flank in the form of a half battalion (wing) of British Line infantry. 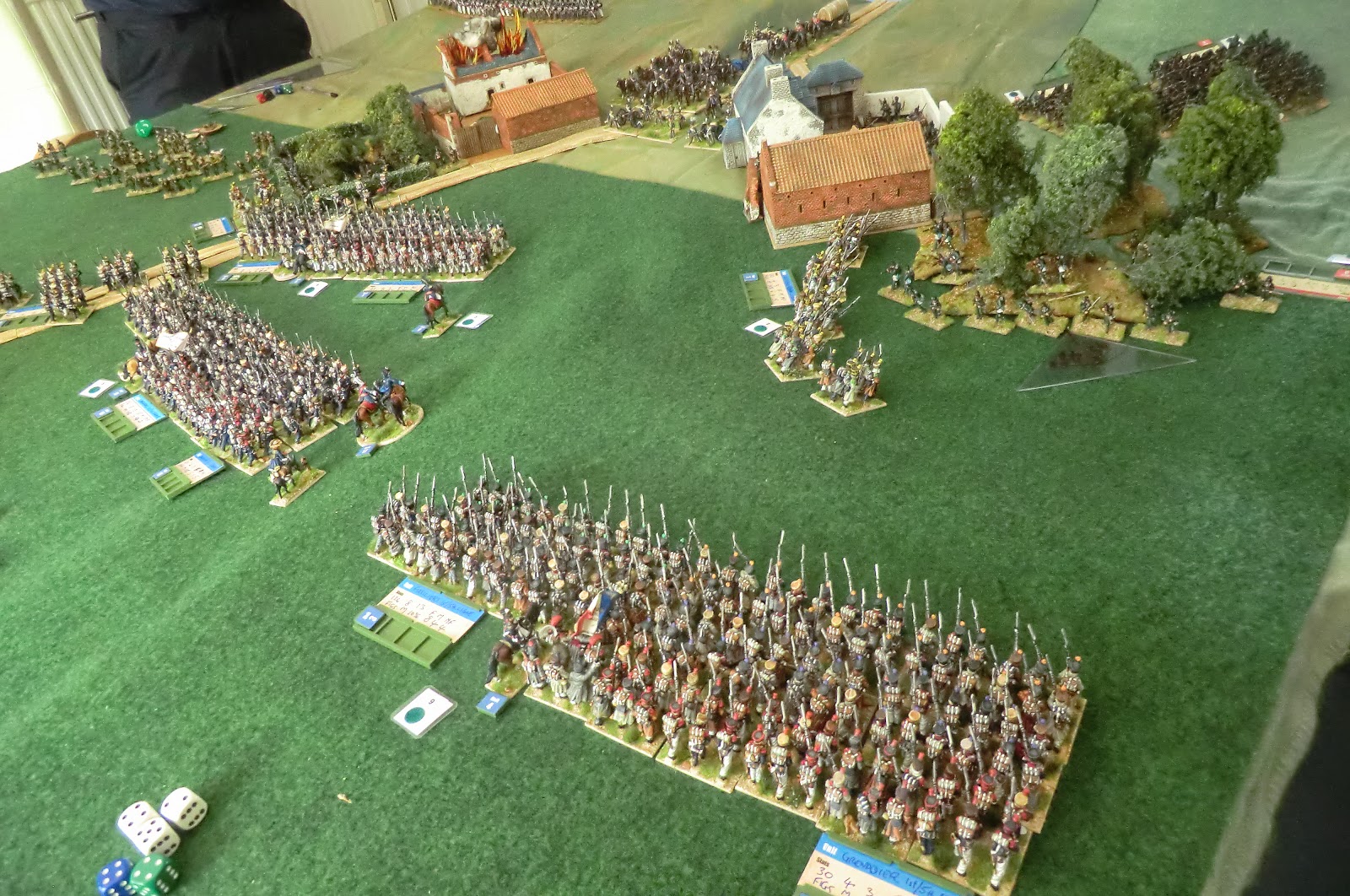 A general view showing most of the table. French Voltigeurs engage Riflemen in the right hand woods. The farm building burns more fiercely. 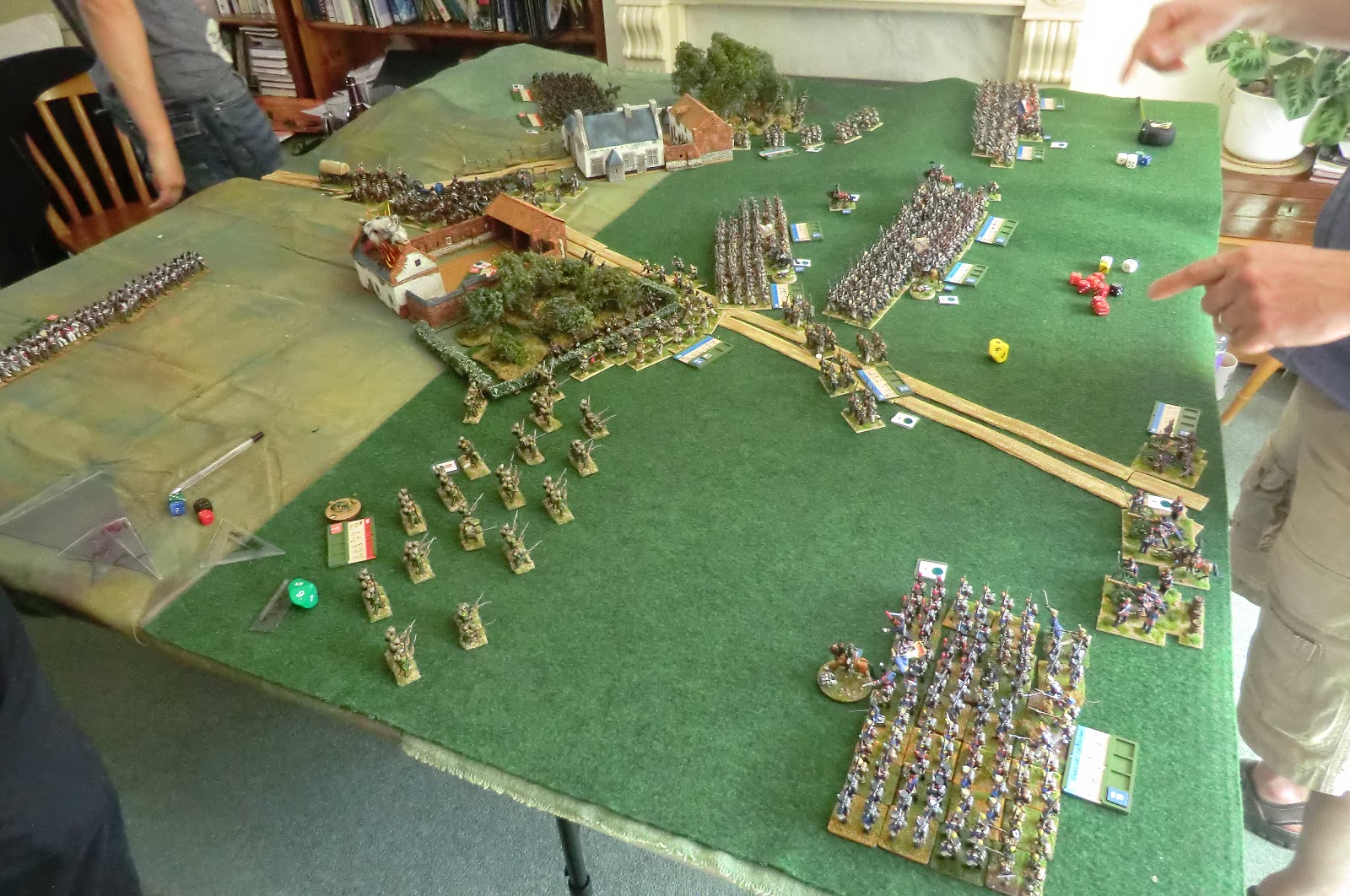 A fourth French battalion makes an appearance in the near corner and Richard's Nassau skirmishers will have to look out. 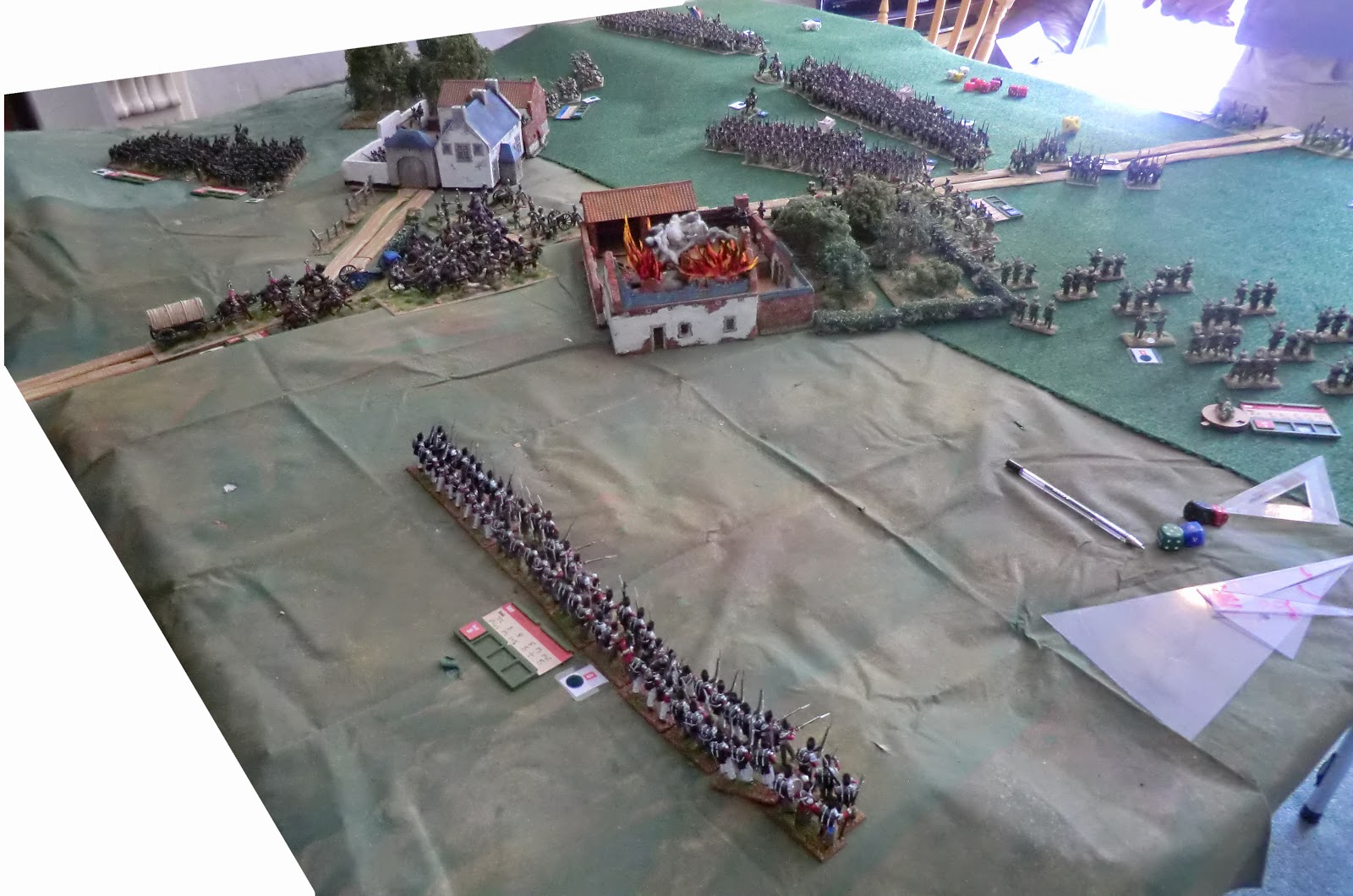 View from behind the Allied right flank. On the right are 30 degree round shot angles and a 10 degree canister angle. On this scale canister could reach across the table, given line of sight, but ball proved useful for a narrower field of fire. 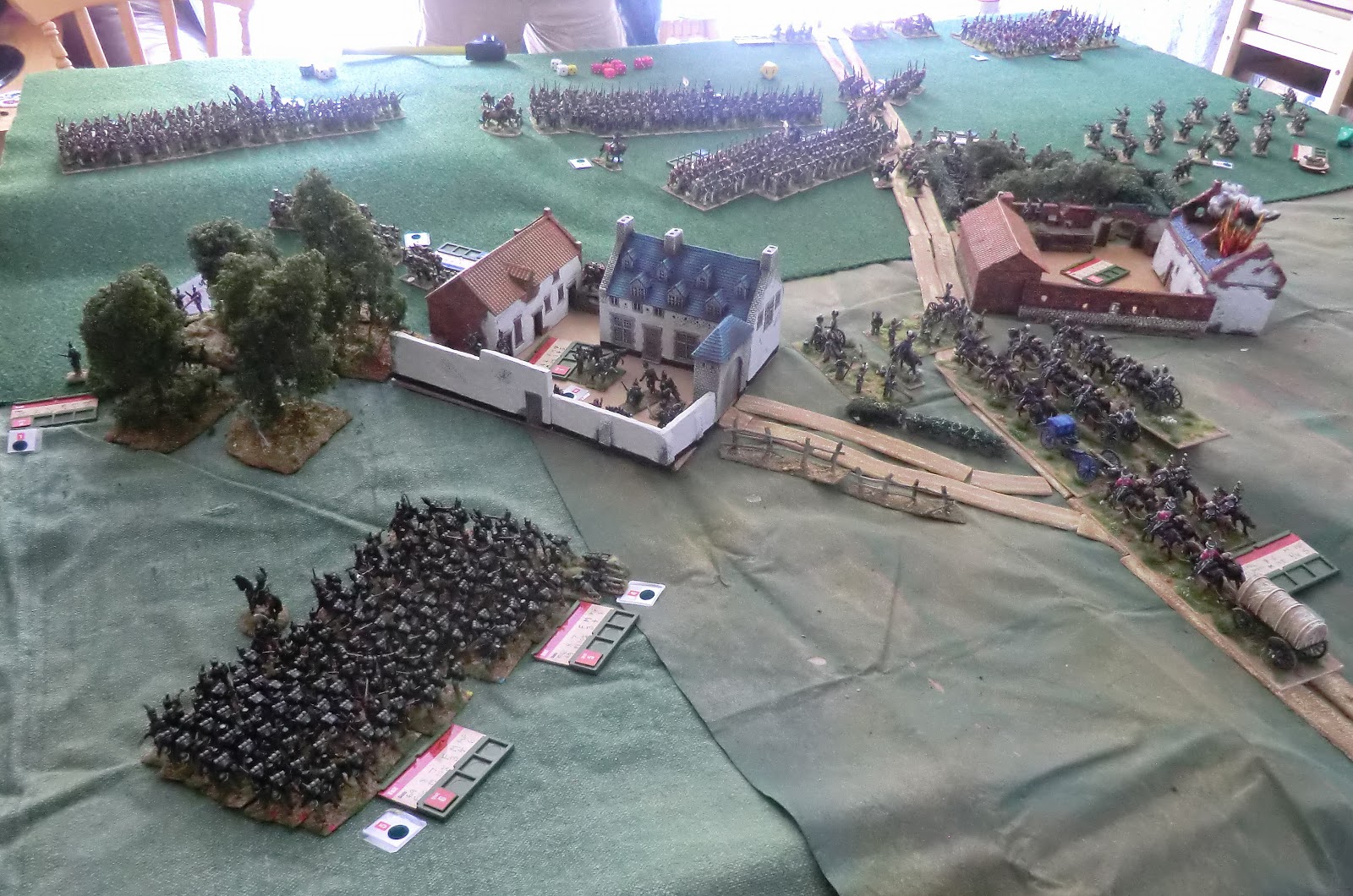 This general view gives a good idea of one of the delights of gaming in this scale - the solid masses of 130 -180 figure battalions. 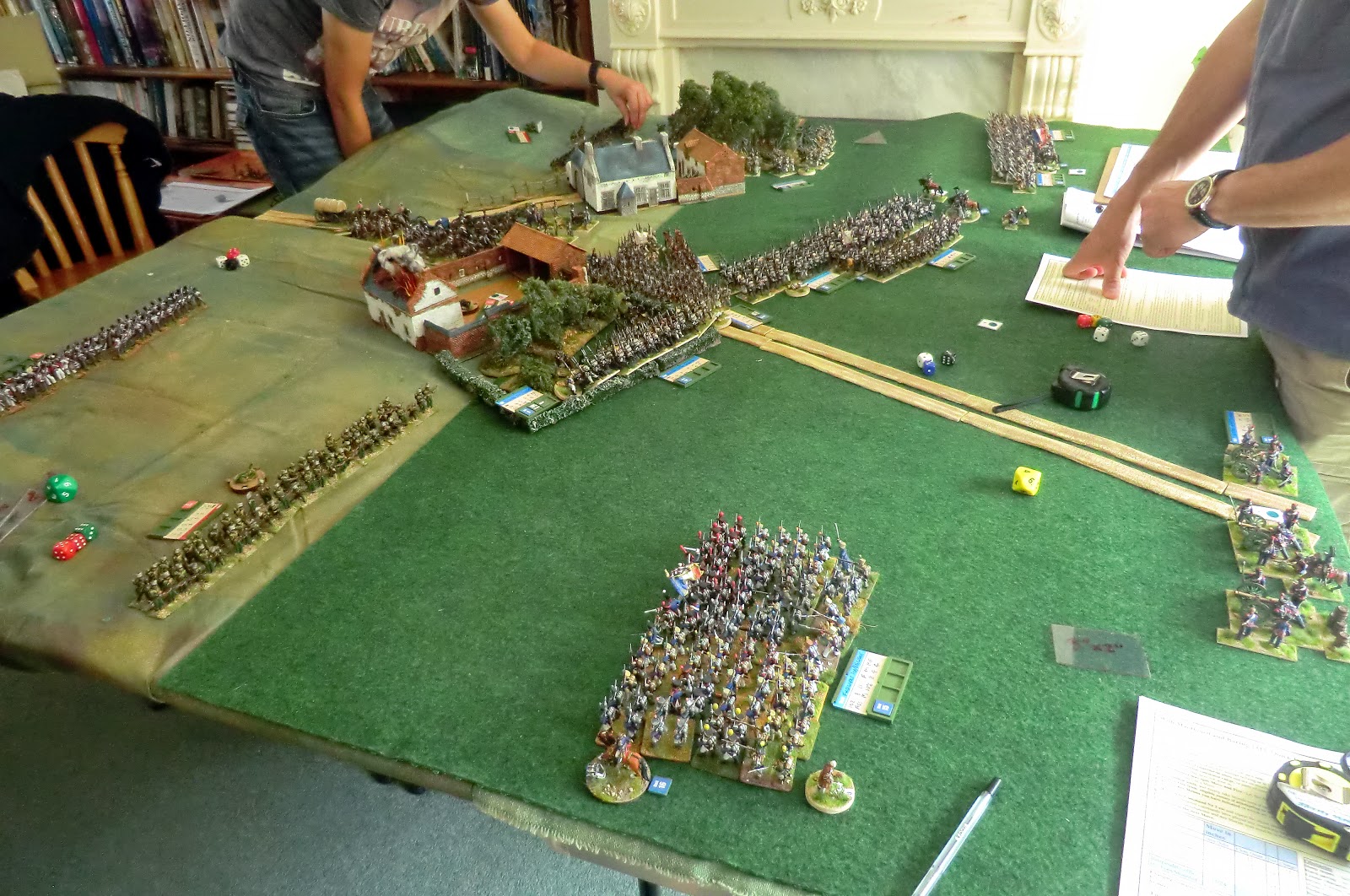 The Nassau Voltigeurs have pulled back and formed line to face their new foes and French line infantry engage the orchard hedge and the farm main gate. 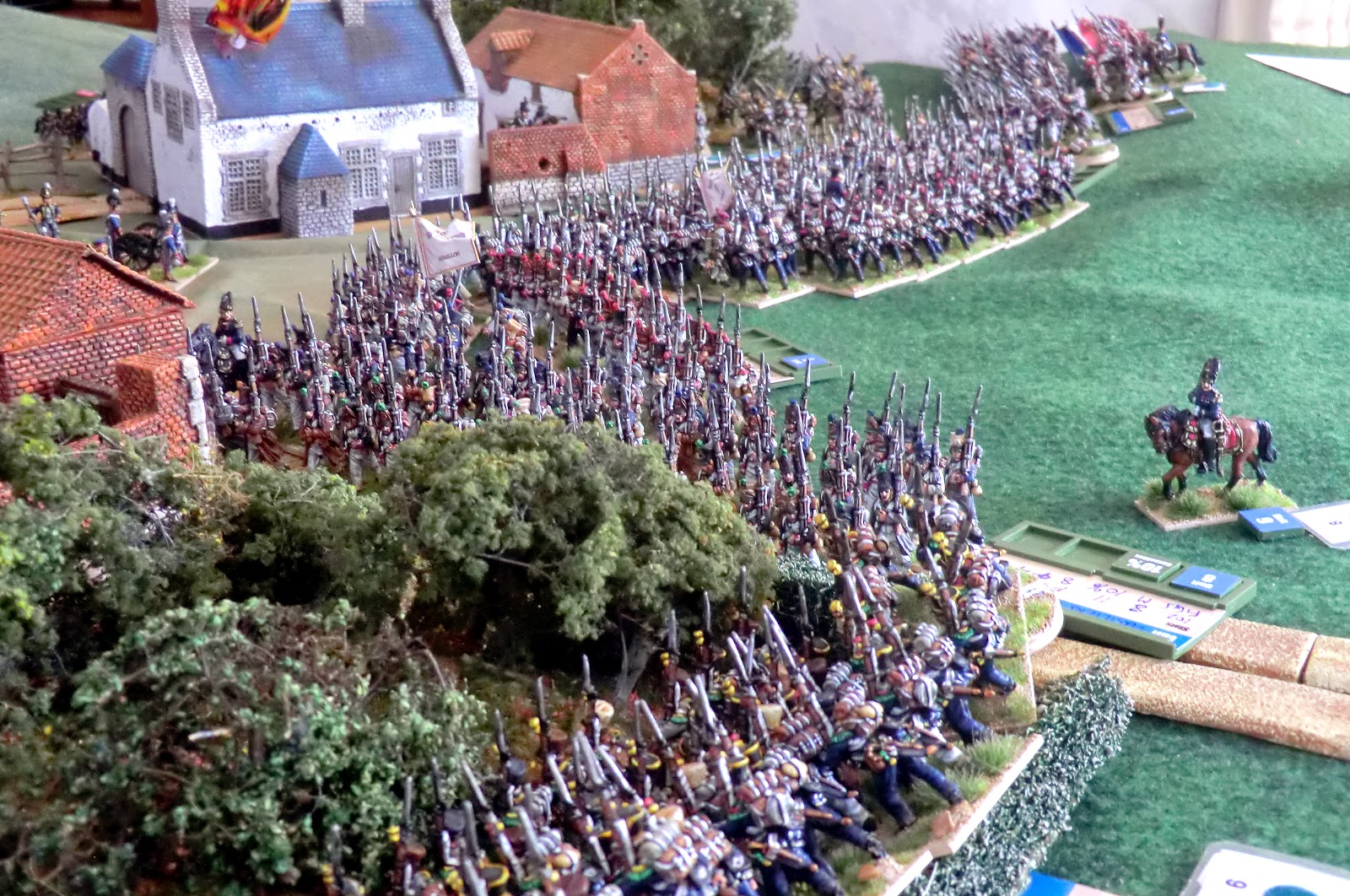 I was pleased how my special rules for pushing melees with reinforcing masses quickly broke any sign of deadlock. No more a few skirmishers holding up hundreds just because they are defending soft cover. Here the 95th began to yield the orchard. 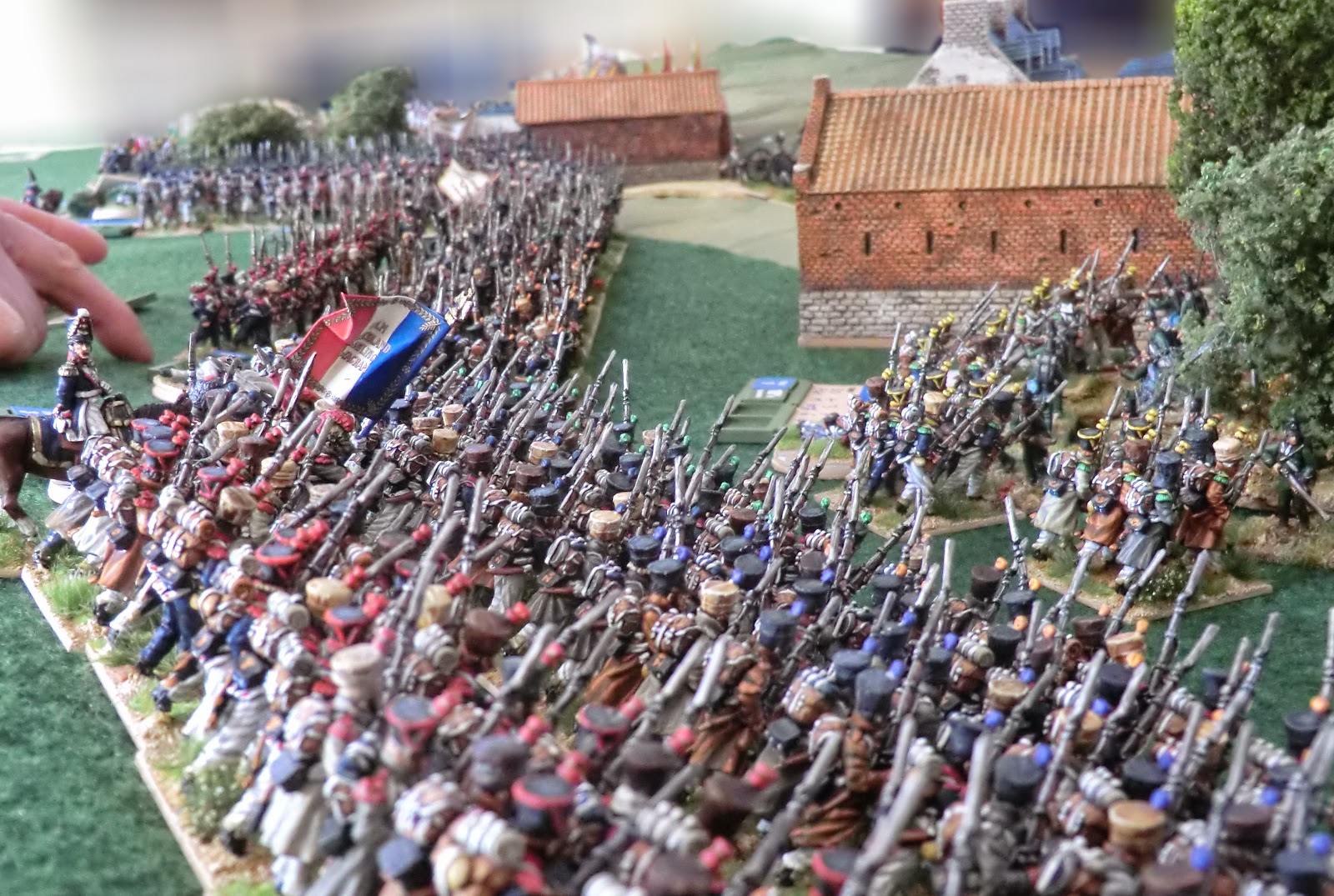 A nice view along the line of French attacking columns 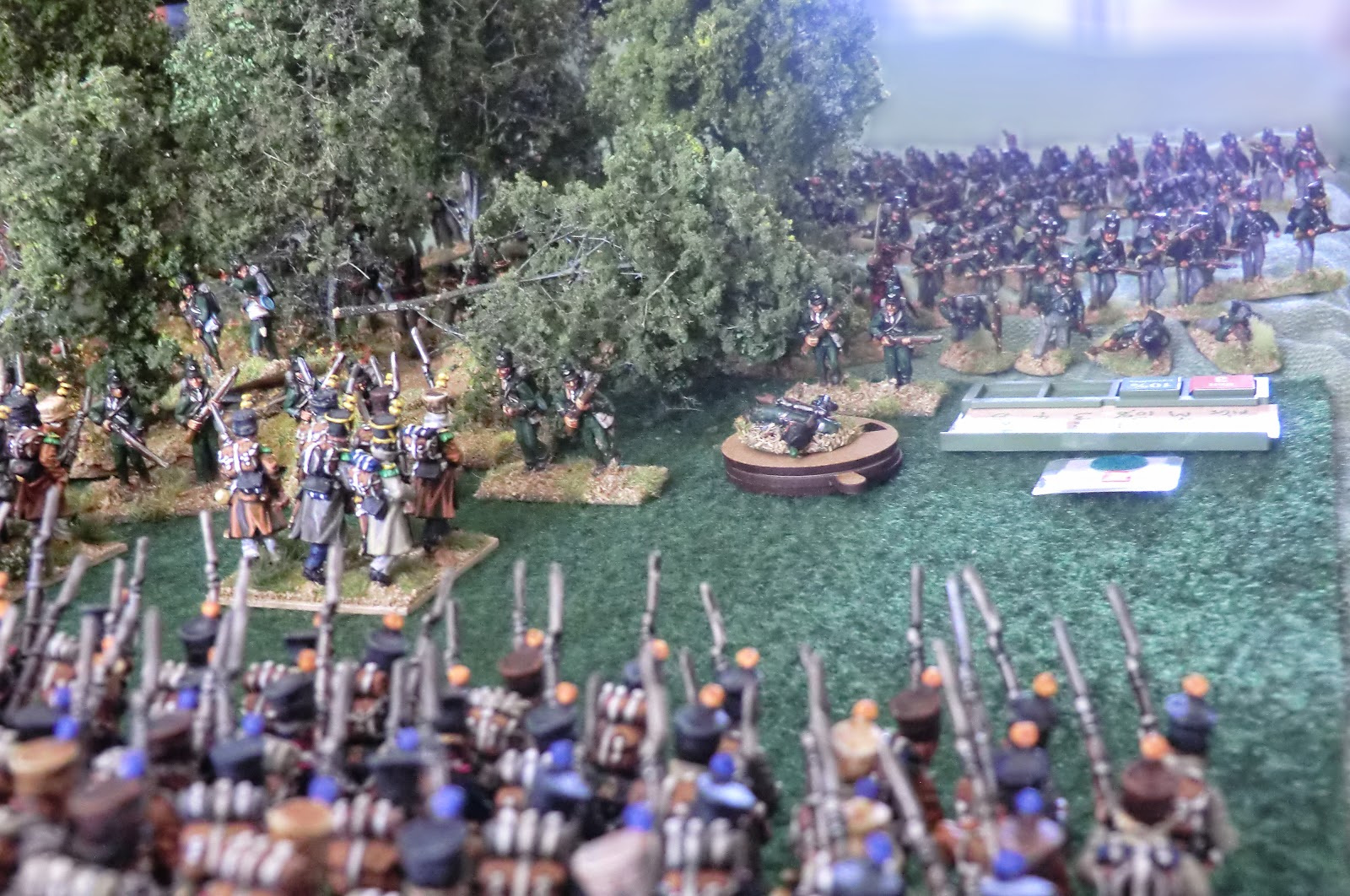 This view from behind the same battalion shows a significant close range engegement building up with 2nd Light Bn KGL. 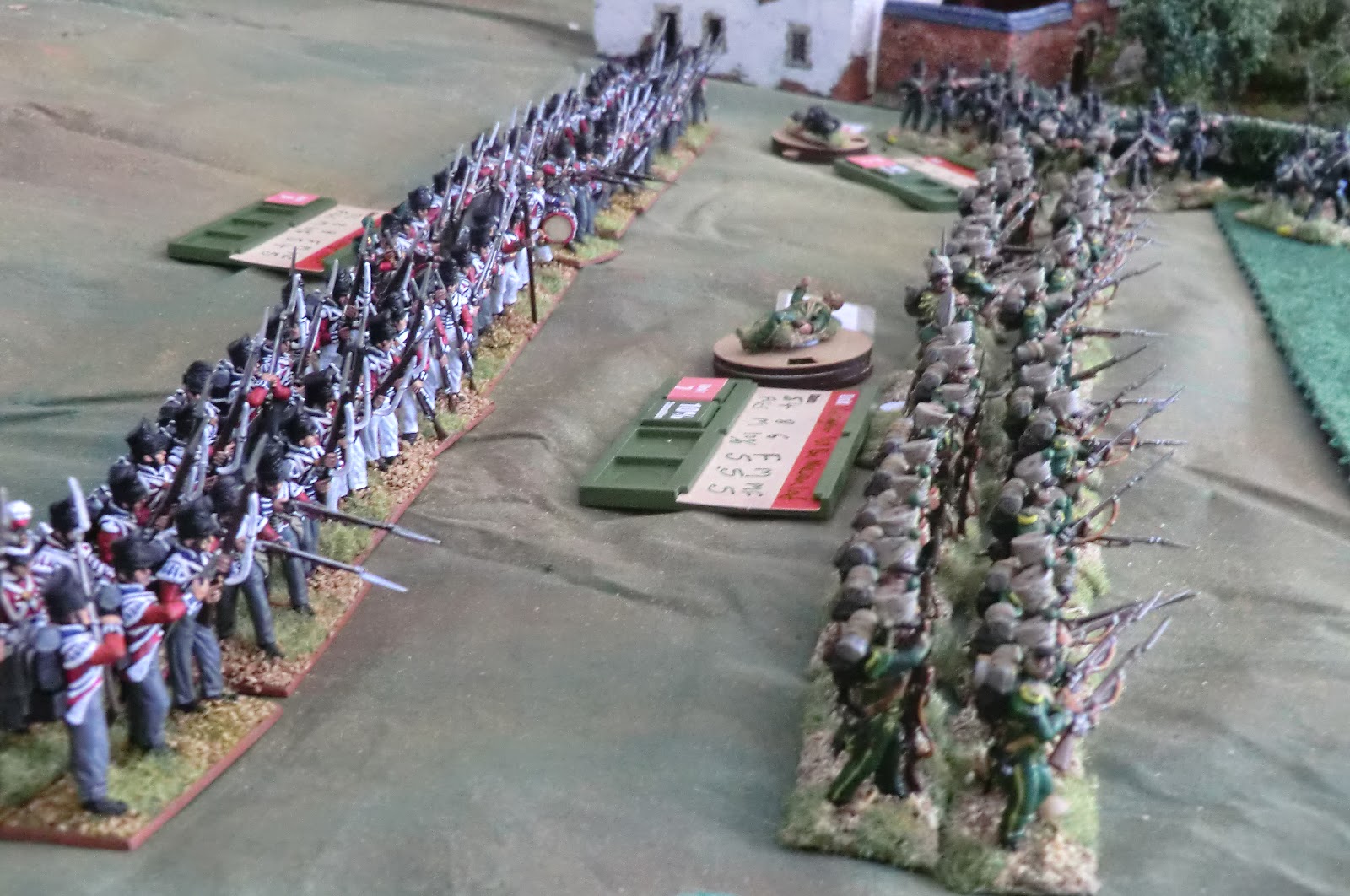 Allied light and line troops prepare to meet the French with volleys. In the distance a Rifle company has made its withdrawal from the orchard. British Royal Horse Artillery battery, though at present we are having to use some foot artillery crews and teams to make up the strength. French howitzer fire has now set the other farm alight. 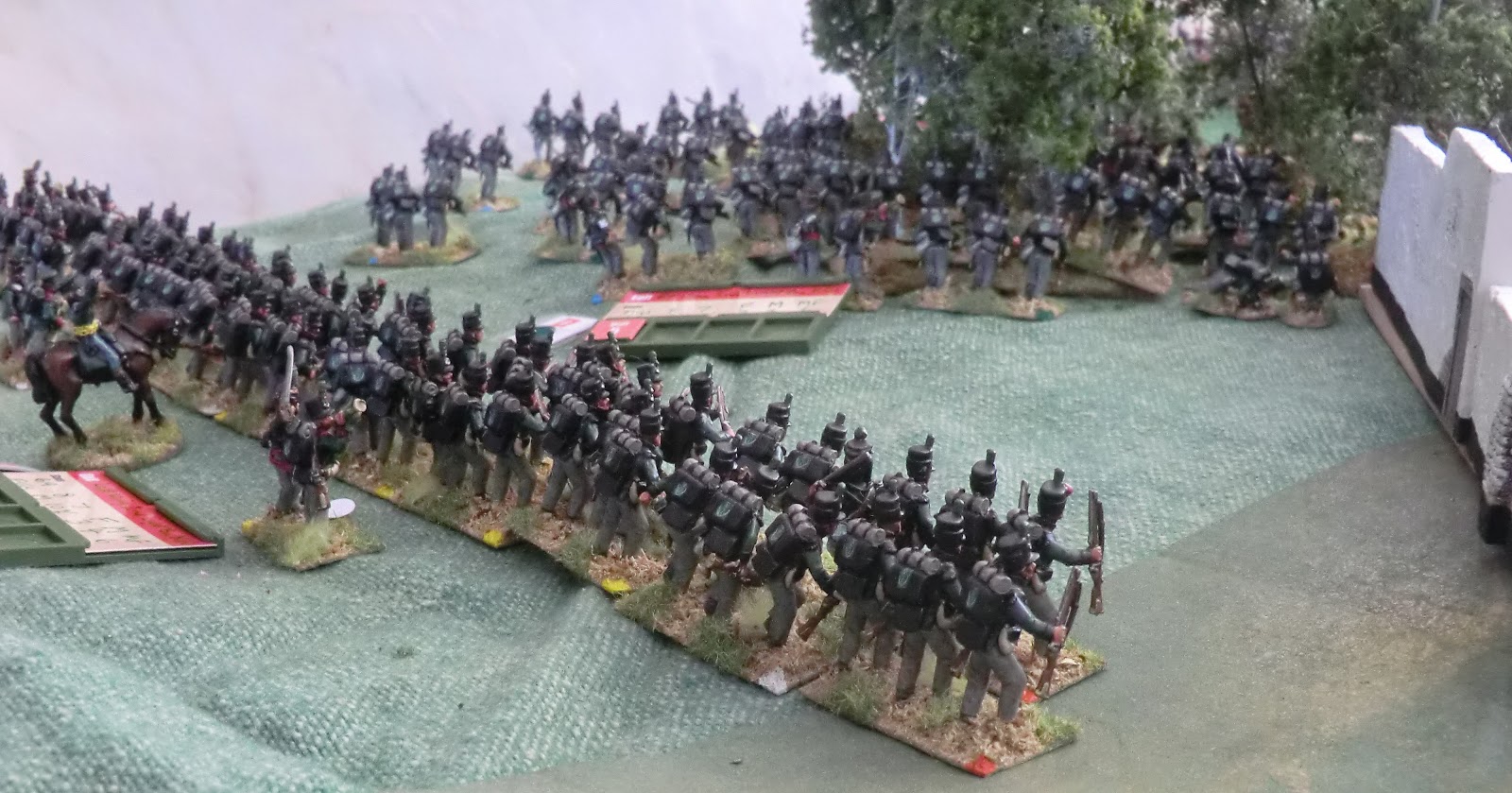 The second KGL wing takes up a reserve stance while their colleagues reinforce the wood. 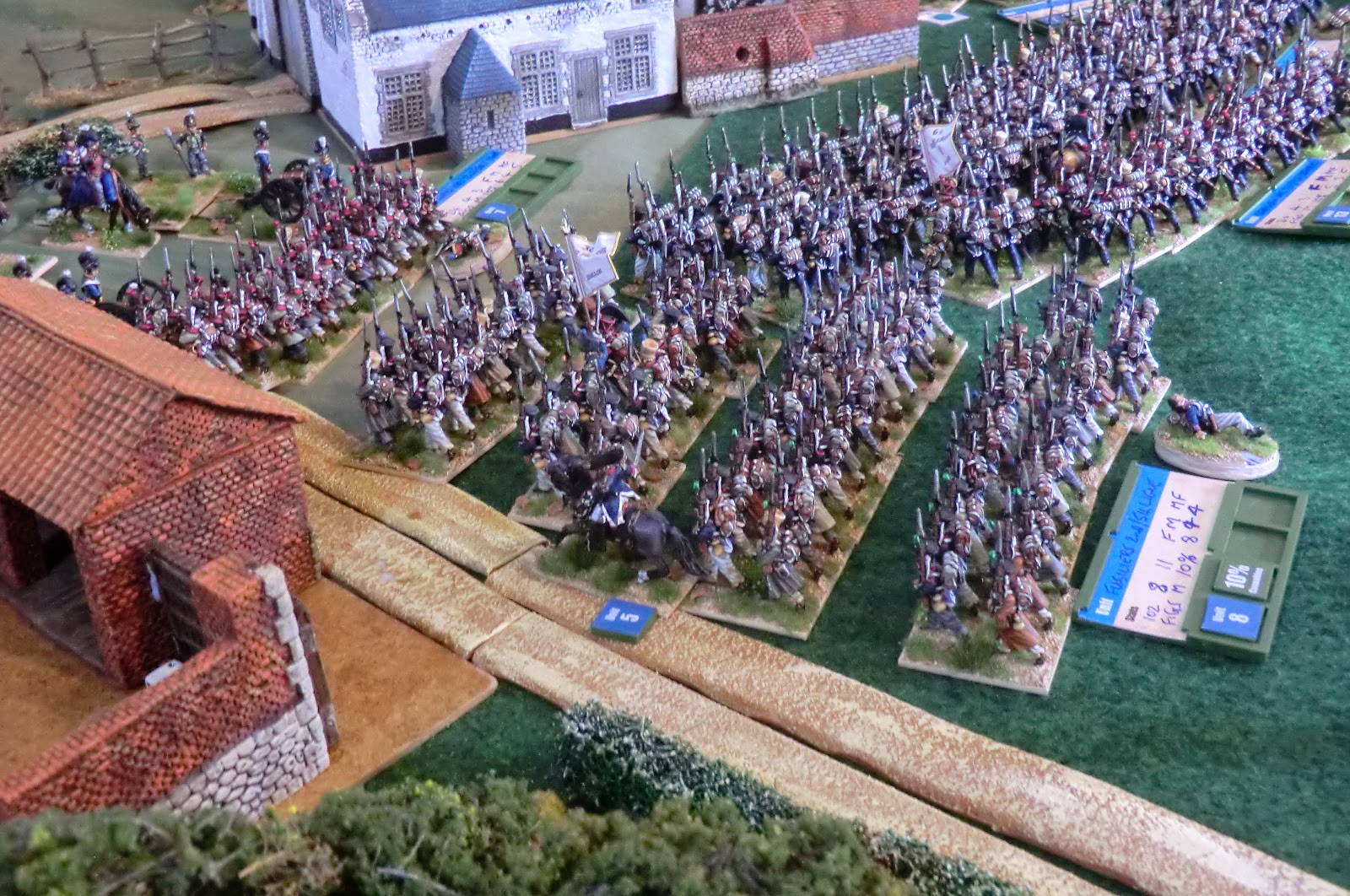 Finding he could not break down the farm gate quickly enough Kevin reorganised his front to form a column of companies led by his Grenadiers to attack te RHA battery frontally. The casualties suffered were not enough to repel the attack and we all felt amazed that the French got off so lightly. However, I explained that the canister angle (Charles Grant style) was deliberately narrow due to the very long potential range on the table, therefore at very close range like this not many figures are actually hit.

We didn't have time to see the melee through but just before we packed up two of us had a play around with the line versus line musketry dual hinted at in one of the photos. That was a worthwhile exercise because it showed that casualty rate attrition, and subsequent morale checks, was too slow for gaming purposes so we made some fairly drastic amendments for the next game.

In conclusion everyone involved said how much they enjoyed the day; whatever the outcomes it was sheer joy playing with these large formations, and particularly for Kevin who has put so much loving attention  into his figure painting and basing. We'd spent about 7 hours playing of which probably about 4 was productive due to constant debate about the new rules, and some really useful amendments resulted, including the observation that we need to set up a test with attrition already taking its toll on morale. So, coming shortly .....the cavalry test game.

I'm currently reading Captain Kincaid's memoir "Adventures in the Rifle Brigade" and was astonished to come across this cryptic entry in the diary for early 1811.

Gosh, this gets the artist's juices flowing and all sorts of questions spring to mind. What a dramatic painting it could make having a body of 95th Riflemen, led by a dashing pelisse wearing officer taking prisoner a French uniformed aide-de-camp, and the "Hussarette" wife standing by looking rather shocked but "handsome",....err, well that means sexy to me, and what my Hussarette project started out for.

So does anyone have any more information on this? What kind of uniform would a Portuguese wear who had enlisted as an aide to a French General, and I think we could use a lot of artistic licence for the wife. Does anyone know their names?

Any patron of the arts out there care to commission me, and have a big say in the painting design.

Of course you could read the English differently to mean that it was the ADC dressed in the hussar uniform, but that would rather spoil the vision. I think an ADC would be likely to have a splendid hussar uniform and therefore not so worth remarking on as a woman wearing one.

All comments welcome, but please not anonymous ones.