Kevin East has been busy preparing some of the, shall we say, more specialist units for our final part of West Country Quatre Bras in April.  What follows is his description of preparing and painting the models for the French Imperial Light Cavalry Division.

As I understand it the Light Cavalry of the Guard were the advanced guard of Reille's II Corps in the approach to Quatre Bras on 15th June 1815. They had a brief skirmish with men from the Prince of Orange's Corps and then retreated to report on the enemy positions. After that they were held in reserve and Ney had instructions from Napoleon not to use them as they were so valuable to the Emperor. Yet they were not withdrawn or sent to aid Napoleon at Ligny; so why not assume that our French wargamers in the  QB refight could use them under certain conditions. What those circumstances will be are only known to "the Man" since Kevin is busy planning the orbats and victory conditions for QB 2 in the next few weeks. The game takes place in mid April and if you are reading this and have an email invitation from me, please reply soon!

Since QB1 it became clear that the French Guard light cavalry Division was going to be potentially employed in QB2. I say potentially as I am hoping they will be employed as I have just painted all of them at 1:20. 103 cavalry figures in total. Deep joy……but deep pain if they’re not required!!!

I already had the Guard lancers and horse artillery, albeit Tony (Ney) Dillon has procured the 2nd Guard horse artillery battery, as I had created the latter for QB1 but the Guard Chasseurs were yet to be mustered.

Perry (my favoured manufacturer) do a full charging and also swords shouldered pose so I decided to opt for full charging for most the models. I don’t know about you but I hate model sabres bending into a contortion during a game and the charging models for these figures are particularly so inclined. I decided to manufacture my own and replace those flimsy lead ones at once!

I remembered a method from an old Foundry book penned by Kevin Dallimore.
Panel pins once curved to shape and flattened between hammer heads do the trick. Once shaped, edged and sharpened (I use a dremel) with a fine handle ground at the end to fill the drilled hole in the models’ sabre hand once the old lead sabre is removed. Hey presto – a much more appropriate weapon! Do these en masse and do more then you need as some will just not work out the way you want.  Here they are sabred up and ready to go!

To paint 54 chasseurs lined up with a paint brush in hand is daunting  so I split them into three groups of 18 (squadron size for QB2 as it happens) . Some were one piece castings others were separate horse and rider. OPC riders first. With my newly acquired toolzone glasses i've managed to gain more detail - at last I can see what I'm doing!! What a revelation :-) The  lenses were very easy to adjust and work with (although I didn’t like the LED light source so I remained with my trusty Tizio lamp). Results were immediate and very effective……at least I felt so.


A coat of gloss and matt varnish then brought to the finishing line; basing. I really enjoy this aspect as it brings the whole activity to a pleasurable visual conclusion.
Then the Chasseurs were complete!
That left only, a favourite of many, the squadron of Mamelukes to paint in their delicious colours. They may not have been involved in the 100 days but I couldn’t resist temptation and their likely participation with 130 sabres = 6 models at 1:20.
Assembled together they look a menacing force in a final image of the entire Guard light Division to put the fear of God in the Allies! These represent the best part of 7 weeks painting with the Christmas holidays bringing a cessation to my wargaming habit.

Well, I wonder which lucky wargamer will get to command them in our refight? If we don't get enough players it might end up being me!  It's a tough job being Kevin's wargaming mate, but someone's got to do it :-)

Talking of tough, he's given me about 20 photos in addition to the ones for the above article and let me choose which ones to use. I'm rather weak willed so I hope you enjoy all these too.......... 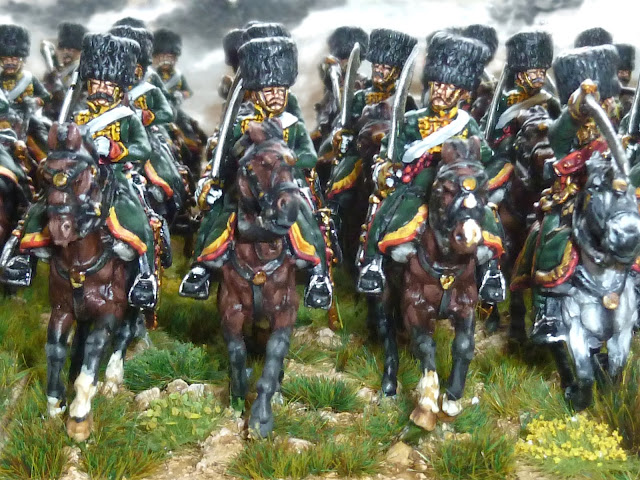 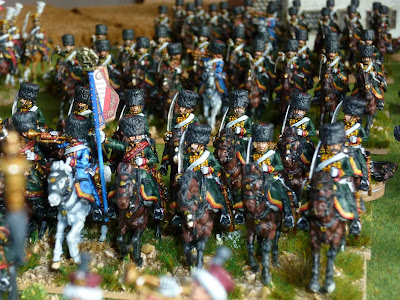 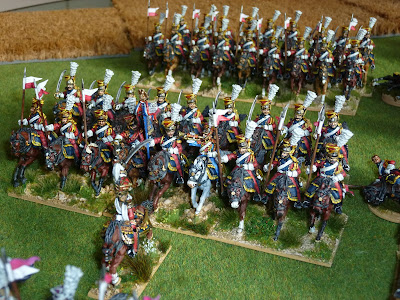 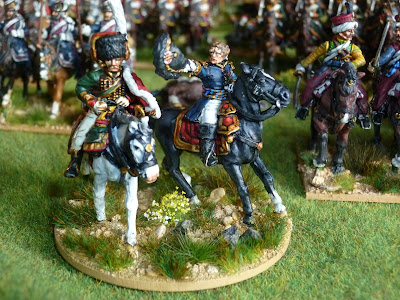 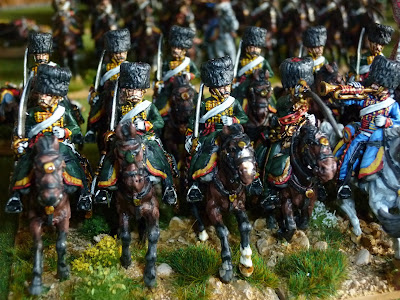 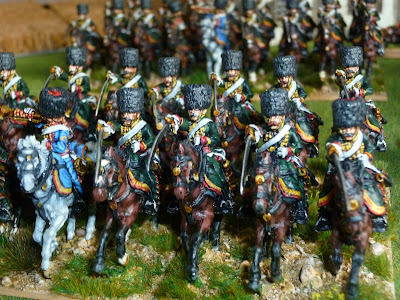 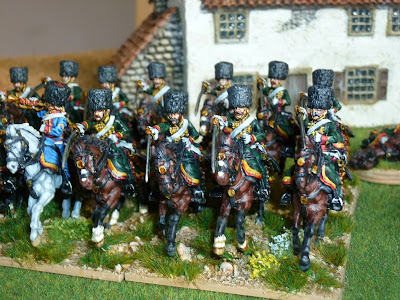 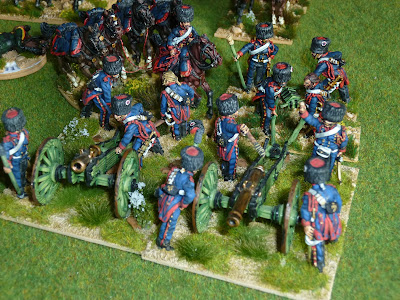 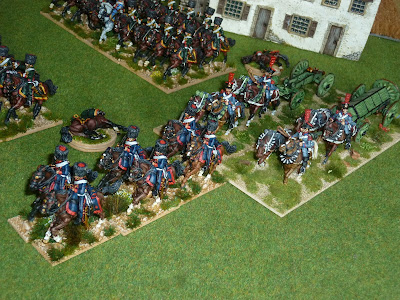 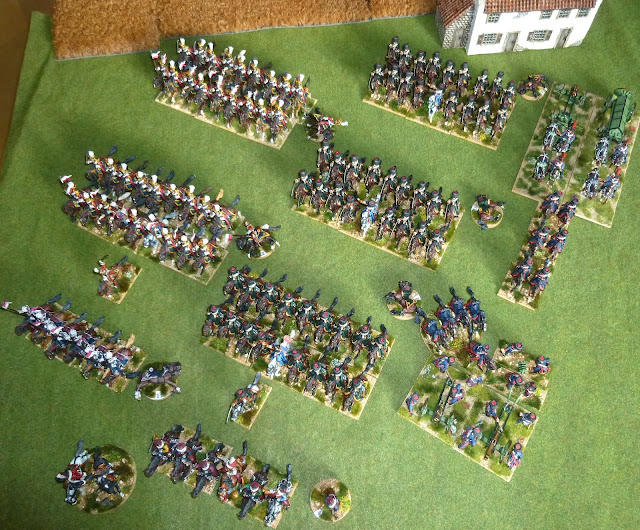 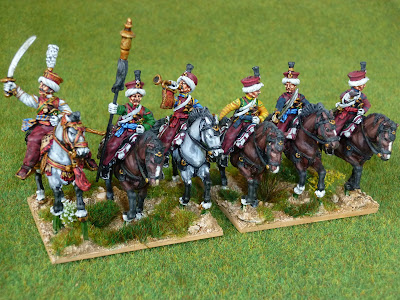 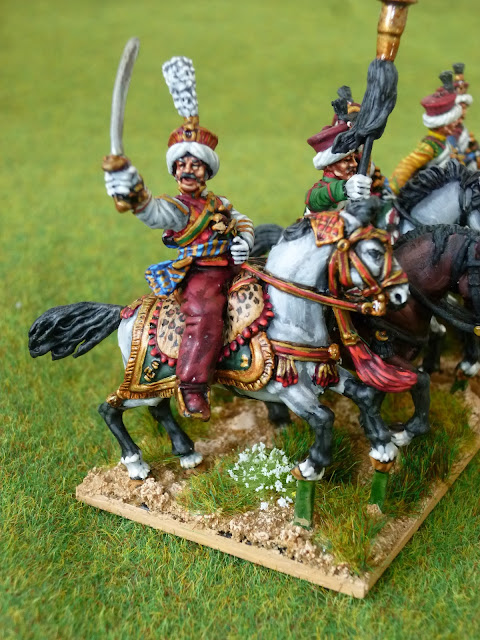