I first blogged about my initial foray into painting the female form in colourful military uniform back in the Spring. If you can't remember it please see lady-hussars-anyone
Since then, in between many of my conventional landscapes and other commissions, I've managed to paint a few more. One of my supporters has dubbed them "Hussarettes", so I decided I would follow a formula in my titling system by numbering them in sequence, and giving them each a name and a military unit based on the chosen uniform, with a date; as far as possible the name and unit start with the same letter. I also thought it would be fun to incorporate the girl's name into the design somehow.
I started off with "Lucille of Lauzun's Legion" who became Hussarette Nr 1 and you can see her on the earlier posting together with some very helpful and encouraging comments from readers.
Next I took the opportunity to paint a special one for a man who has been a great influence in my life and who, indirectly, is responsible for me going down the road of enjoying painting scantily clad ladies.
. "Natalie of the Nassau-Saarbruchen Hussars, 1747" is based on one of his wargame regiments and had to be fairly racy to do justice to her new owner. So here she is: 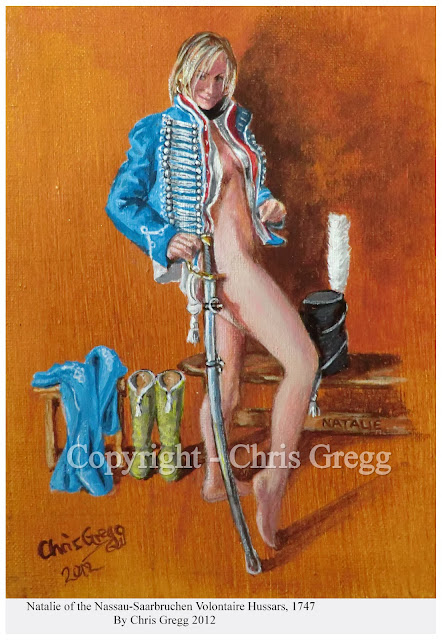 Natalie therefore became Hussarette Nr 2. and she was painted in acrylic on a 9 inch x 6 inch gessoed canvas which I left with a slightly raised texture. More on her later.

I then decided it would be suitably patriotic to leave that entrancing light blue behind for a while and paint some British regiments.  So I did a group of three, the first one of which, Hussarette Nr 3, is:
Tamsin of the Tenth Light Dragoons, 1796. 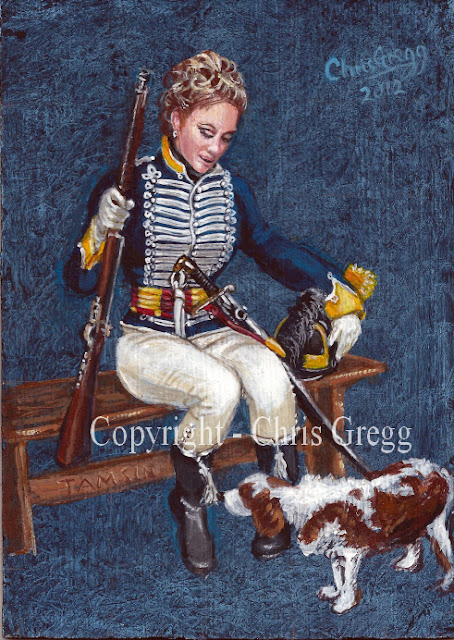 I always begin to wonder whether one can weave a little story behind a figure painting and it can get a bit difficult in this "fantasy" genre because there were no real female hussar regiments. However, I think that Tamsin is actually preparing to sit for her portrait. She's just got her maid to do her hair in a fancy style and fit false eyelashes, but she doesn't want to conceal her curves by wearing with those horrible carbine and sword belts, nevertheless the weapons themselves are a natural accoutrement to her military status, together with her Tarleton helmet with its yellow plume......just then Bonaparte, the artist's mongrel, scampers in playfully and detects the unusual female pheromones........what happens next I leave to your imaginations ......but will Tamsin's hair stay in place?

With Tamsin and Lucille I had a fully clothed Hussarette, but part of the fun of this project is to stretch the boundaries of decency a little as well as challenge myself with more flesh to paint so it was time for another a bit more exotic. Here we have Hussarette Nr 4

"Sophia of the Sixteenth Light Dragoons, 1810" 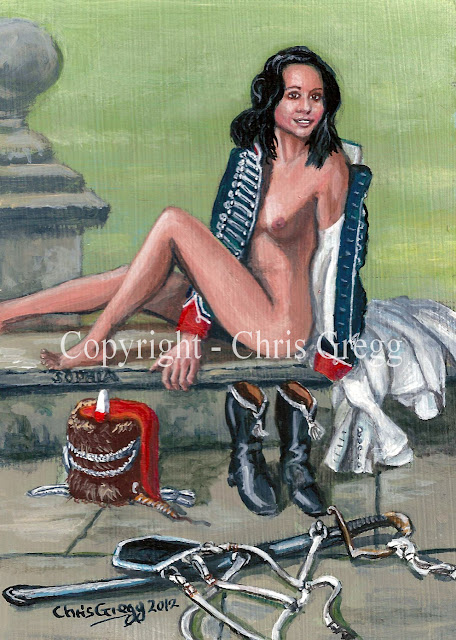 Now it's a warm Summer day in the garden of an English country estate. Captain Ponsonby of the 16th is playing cards in the summer house with fellow officers on leave, and his Spanish mistress, Sophia, brought back from the Peninsular War, is bored.  She's found his uniform and sabre and takes them out into the garden where she begins to play........and try to attract some attention...........what will the gardener think?

Last in this group we go back to a clothed maiden and some fighting spirit with Hussarette Nr 5.
"Rosalie of the Royal Horse Artillery, 1815" 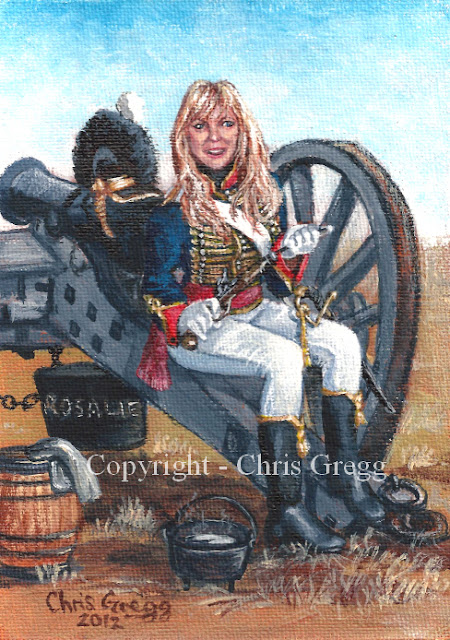 Rosalie is a Quartermaster in the RHA....or should that be Quartermistress? Most of the women I know are good at organising and good with money so why not a woman to look after all those supplies for the gunners and their horses?  It's the day after Waterloo, and Rosalie, though not used to fighting, as the battle raged realised that it was going to be a "near run thing" so she joined in with the lads and was banging away with her pistol to bag a few Froggies. Now it's time to tidy up, but of course first she had to see that her hair was brushed nicely and her uniform and boots were clean and then that mucky old pistol with its congealed black powder had to cleared of its fouling before inspection. So she boiled up some water in a skillet, put her cleaning rag on a nearby barrel, and sat on a cannon to get on with the job...........But oh.....that nice young Major The Honourable Charles Pilkington-Smythe is coming over........and a girl can't be caught with a dirty weapon!

Tamsin, Sophia and Rosalie are all painted in acrylic and are each 7 inches by 5 inches. Rosalie is on canvas board, so you can see an indication of the grain. The other two are on smoother gessoed board so only a faint texture is visible. I experimented with Tamsin using a two tone blue marbled effect for the background.  The originals of all three are for sale at a mere £45 each unframed. Please email me if you are interested  Chris Gregg.  Likewise if you would like to commission something special reflecting your own ideas.....I can do conventional military subjects too.

But there is a bit more to this than just showcasing as I'm seeking opinions as to how to take the Hussarette project forward. It's been suggested I should do a calendar of say 12 different regiments and then a cover page of another one or more. I have in mind to do the French Napoleonic Hussar Regiments as the number of historic units would fairly well match the idea. But the theme could be anything from any period that involves uniforms with the light cavalry swagger - hussars, chasseurs, light dragoons, etc so I'd be glad of any comments you have on the subject, and any themes or particular regiments to suggest (Jean-Louis has already highlighted the French Guard Chasseurs as a possibility which I'm bearing in mind.) So please comment on this posting or email me if you prefer.

Thank you for sticking with me this far - and now back to Natalie
Despite her rather roughly  painted appearance Natalie is my favourite so far. I've had a canvas print made 24" x 16" and she sits in my studio with her eyes following me round the room with that come-on look, and she has no story.......she's just a kind hearted tart in uniform! 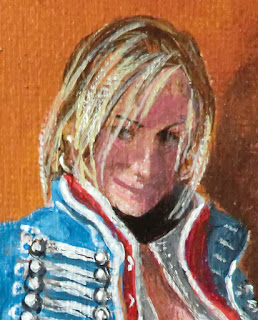 This is very close to the expression adopted by my model when she took up this pose with the sabre, and with the rough hair and light catching her nose and chin, contrasted with the black stock, I think it's captivating.  You can often see her picture in the background of many of my wargaming blog posts trying to distract the players!

Addendum
A lot of time has passed since I first posted this and some even better Hussarettes  have been painted since. So anyone arriving first at this post may like to see these more recent ones also.
Natasha
Suzanne et Suzette
And there are many more up to 2020. Please see my Art Website - Hussarettes Theme
Posted by Chris Gregg at 00:38