More of my 28mm KGL Riflemen on Ebay

Just a quick note to alert any readers/visitors who might be interested, or lost out last time, that I have posted another batch of 28mm Riflemen on Ebay, and they are running all this week.

These lots are about 90 figures that remain of the 1st Light Battalion King's German Legion which we used in our 1:3 scale refight of the action round La Haye Sainte during the Waterloo bi-centenary year.

Here is a link to photos of the first day's wargaming in which 1st Battalion had a support role and then moved up to assist at LHS.  The following are some photos of the game which feature prominently the figures I am currently selling. 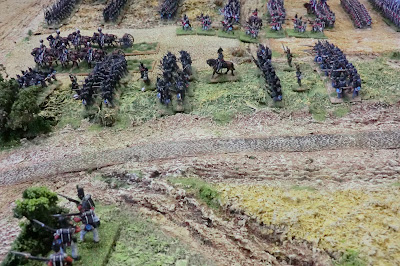 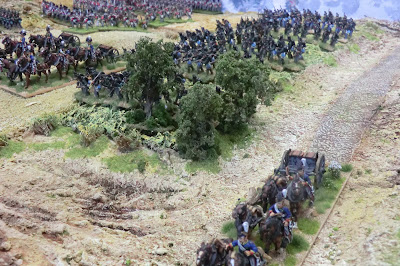 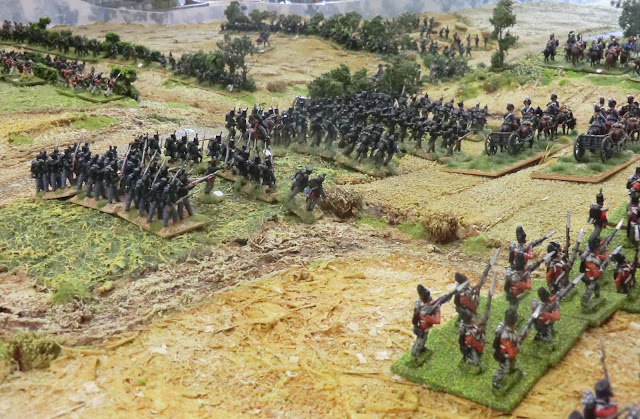 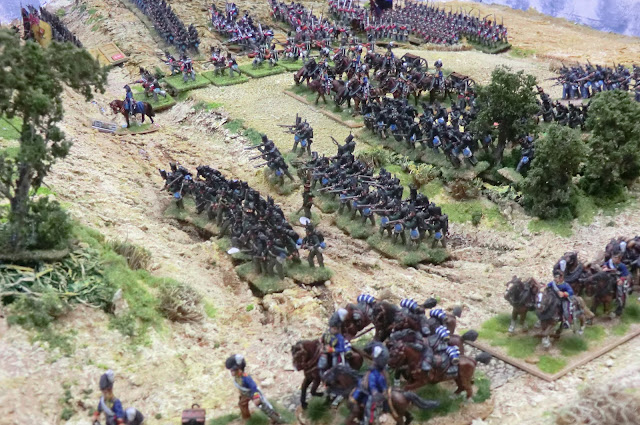 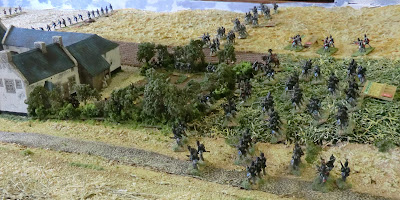 Although there are a  few specifics of uniform to 1st Battalion KGL Rifles these could, with very little effort, be used or painted as other green-jacketed Allied troops such as 95th or 60th Rifles or the Hanoverian Light Field battalions.

Regular readers may be thinking I've given up!  Nothing could be further from the truth. It's hard to pin down why I have not done any proper wargaming blogging since about last October but I blame the computer!  It's not just that but a series of priorities in family life, art work, a significant model soldier project, planning wargames, charity work in my village and Christmas/New Year. All of this militated against any significant wargames reports as I like to put proper effort into them. But nearly all of this requires a reliable computer and plenty of time.

I don't know what caused it but my 5 year old iMac started playing up about Spring 2019, and by August I had to consult Apple Care to restart, wipe the hard drive, replace with backed up data and try again. Similar stoppages came in October and November so it went into Cirencester for major repair - a new hard drive. This actually brought more problems as in the process I had the most up to date operating system, Catalina, and lost use of my old Adobe Photoshop Elements program. I bought Elements 2020 but could not get it to work. It took me till early January to sort that out but in the process discovered that "something" was causing my account to slow up. That involved a couple of weeks verifying I had all I need from a new account which the lady technician from Adobe created for me. Even then I had difficulty deleting the old account which was clogging my system. All this had knocked my confidence and turned the iMac into a very sick friend that needed constant care. However, although I've been told that Catalina does bring its own problems, I think now (fingers crossed) that Chris' iMac is a fun friend again.

No need to feel too sorry for me as throughout I've kept up some wargaming; I think I've arranged about 7 games here since October and played one away, that's a good average for me. Many of them deserve blog reporting in due course, and I have not forgotten I need to do at least three more parts to the AAR on the Raid on Vestisle mini-campaign.

So I've been "celebrating" the new reliability of Photoshop with a few enhanced photos that I hope you will like, and serve as a taster to things to come.

First up is a pic of a splendid battle I staged here in November 2018, but never got round to blogging!
This was another WW2 10mm game. 24th Panzer Division's attack on Barracks Hill just North of the Stalingrad old city on 16th September 1942.


More recently I have been spending many months collecting and painting two Imagi-Nations armies for my young grandson Sebastian. It finally numbered the best part of 300 1970s style "classic" 25mm Minifigs, Les Higgins figures and similar. The full story is worth a blog and it resulted in what I think is a good workable set of Napoleonic type rules that anyone could pick up yet have enough depth to interest more mature wargamers too. For now here is a photo from Test Game Two.

I had a return to my beloved mid 18th Century Imagi-Nation armies in December when I made the excuse to entertain Kevin and Glenn with a refight of Klein Krefeld. The terrain, situation and forces were adapted from Phil Olley's very manageable scenario in Charles Grant's first volume of "Wargaming in History". The real battle involved the French defending between two uncrossable water courses against Ferdinand Duke of Brunswick's allied army of Hanoverians, Hessians and Brunswickers. It turned out very exciting and I'd highly recommend this as an intriguing game.

The final game to show at the moment is the most recent. 10mm WW2 again but this time a much different game using a scenario from the Rapid Fire! Eastern Front book. This was a refight of Kamenewo on 6th October 1941 when the panzers met their match against a brigade of mostly T34s and KV1s during the push towards Moscow. I used the Rapid Fire figure/model scale and rules as they stand but with the 1:144 scale/10mm models and it worked very well. It gave a much more open feeling of space than when using 20mm models.

And just for good measure you can take a look at the oil painting commission which was exercising me for much of the Autumn - King Harold and his most trusted warriors just at the start of the battle of Hastings.

This was a companion to a commission from 2018 which readers may not have seen - William the Conqueror during the heat of battle at Hastings.

If any readers have views on what I should prioritise to blog about please comment accordingly, thank you for visiting.
Chris