Making a start on Stalingrad ruins

Those of  you who have read my previous post first-pics-of-new-project. will have seen  photos of some of the buildings and figures I've done recently for my Stalingrad project in 1:144 scale. I concentrated on the figures in that and now I'll turn to the buildings.
First I must give credit to a new book which seems to be what I've been looking for ever since I read Antony Beevor's Stalingrad about 13 years ago. This is Armageddon in Stalingrad by David M. Glantz and Jonathan M. House. 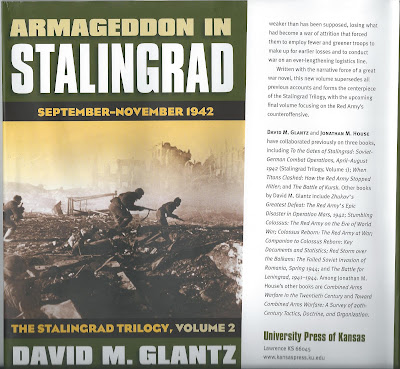 It's a weighty tome at nearly 900 pages and 3 inches thick so will take me ages to get through. But it does contain a lot of detail and a great many maps. There are also a lot of useful contemporary photographs. It's a bit academic compared to Beevor's which is very good for the nature of the conflict rather than operational level detail.  I've only got to page 150 so far and have been searching for suitable wargame scenarios on the scale I described in the previous post.  There are an awful lot to choose from but I've just read about the first real penetrations into the city proper, from 14th to 17th September 1942, and have found a setup that will keep me busy for the foreseeable future (not forgetting more work on my SYW Imagi-Nation and my AWI armies of course!!).  I started out with the figures and ruins without any real goal other than the inspiration over many years from sundry books and movies, so please forgive the lack of exactitude. Now I do have an aim inspired by maps and text in the aforementioned book. Here's a sample map, and there are some more detailed than this too on other parts of the conflict. 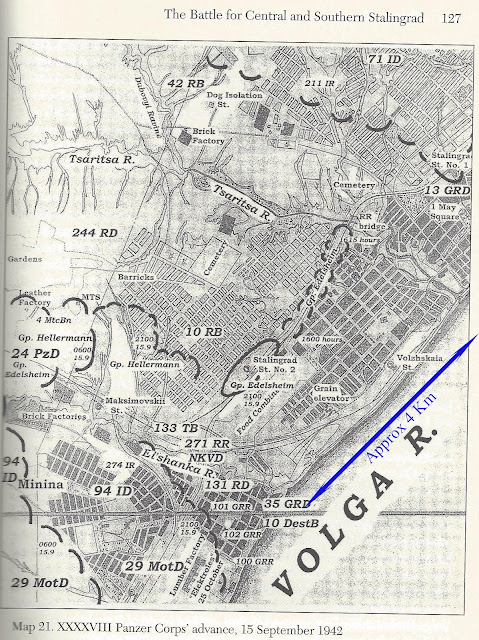 By using four variations of this map and the orders of battle provided in the book I think I can refight the advance by two Kampfgruppen of 24th Panzer Division over 4 days. The main thrust followed the line of the Elshanka River and the parallel railway line, and then moved Northwards to attack Stalingrad Station Nr 2 and on to the bridge over the Tsaritsa River. At the "Rapid Fire!" scale of 1 figure represents 15 men, and one vehicle represents 5, I'll probably need 600-800 figures overall. However vehicles are a bit easier as, by this stage both German and Russian tank formations were down to very small numbers of operational vehicles.

My plan is to halve all the Rapid Fire! distances so direct fire for AT, for example, will be 24 inches. If that represents 800-1000 metres then a six feet square table could accommodate about a 3 kilometre square battle area. I expect my table to be expandable beyond that if and when I get the resources to do bigger games. This also seems about right for the amount of  table space taken up by a 40 figure battalion. Each Kampfgruppe in this scenario is loosely what I'd call "brigade strength".

Now on to those buildings. Don't know about you but I generally need something to galvanise my ideas into action. If several favourable factors come together it gets me going. The figures had been sitting in their packets since Spring while I spent day after day painting 2D pictures for the art exhibition which usually punctuates my Summer. I always promise myself some time off when that is over. Purely by coincidence, the weekend it finished Scott presented his eccentric father-in-law with a blast from his childhood in the form of  two sets of Linka moulds. Here's a useful website for those not familiar with it linkaworld
And here is a photo of some of the moulds 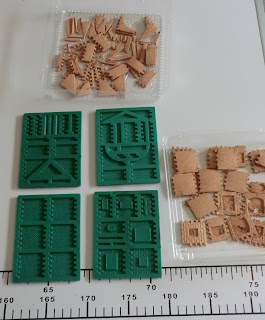 I experimented with a plaster/filler mix but found it rather brittle and difficult to get out without cracking, so I also tried some air hardening clay made by Humbrol and this proved more durable but liable to shrink and dry slightly curved. Sort of fortuitously for this project I didn't mind dilapidated walls, brick shaped ends or cracks, and I ended up with lots of small pieces which came in handy for brick profiled rubble. 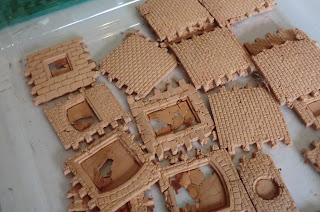 I'm not sure how folks make good looking actual buildings with this stuff (!) but I just got stuck in and fitted it together to make pleasing shaped ruins without any real plan and all the while contemplating how little groups of 12mm figures might fit in. It seemed no good trying to model typical Stalingrad buildings as the Linka shapes are restrictive and I didn't have many window openings. I've got plenty of time to make high rise ruined apartments from foam core board later. So here are a selection of photos, starting off with  some primary coats of black, grey and cream spray paints
I then used  acrylic colours to provide basic ground work and "weathered" all the walls with various tones of dry-brushing.
All the Linka units are mounted on old 3.5 inch square computer disks, of which I have a lot redundant. I thought this would allow me plenty of variations that would fit a pattern of housing blocks or streets.

Here I made a coherent attempt at uniformity by making 3 disk/bases to try to represent a factory with rubble covered machinery and a few girders remaining from the collapsed roof. 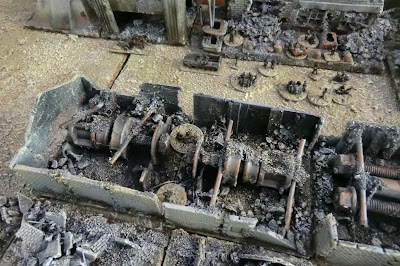 I tried to make some resemble houses 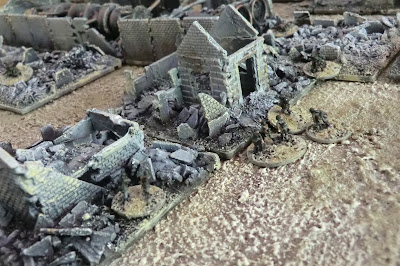 And then there were some bases just of low wall and rubble. 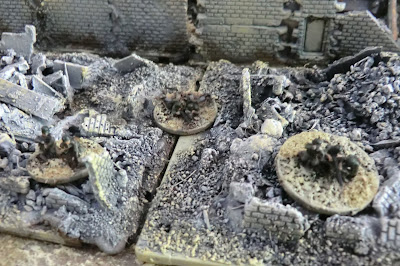 The rubble piles generally started off with a small load of excess stones brushed from the tarmac on my drive. Then I added broken bits of Linka detail, that was all applied with a mixture of paint, filler and PVA glue.  I had put the stones through an old plastic kitchen sieve which I use specially for modelling, that produced a fine grey grit and it proved really good to sprinkle on the PVA-saturated rubble mixture. When completely dry shake of the excess and it's ready for the spray paints. After that the rough surface is a dream to dry brush to represent a coating of dust and small stones over the upper surfaces.

While I had my bits boxes open it seemed a pity to just stick with Linka, so I looked for some suitably shaped objects to make some industrial looking buildings. Here is a general view at the grey spray stage. 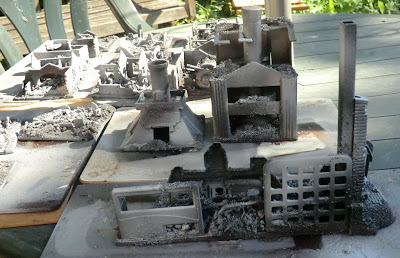 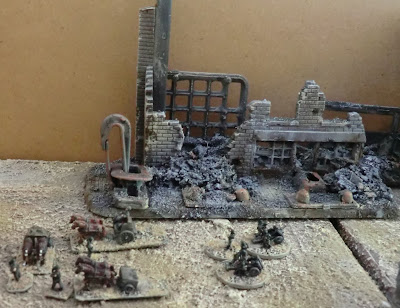 Above and below is some kind of equipment assembly hall, maybe including administrative offices on upper levels. The core of it is a 1:72 scale ruin from a Matchbox vehicle kit and at each end the plastic casing from a defunct calculator - excellent office windows at 1:144 scale! A taller extra chimney makes it seem to soar above the little people. At the left hand end that crane-like object is a plastic strap hook from an old bag. I do like my recycling......cover it with rubble and who'd know? 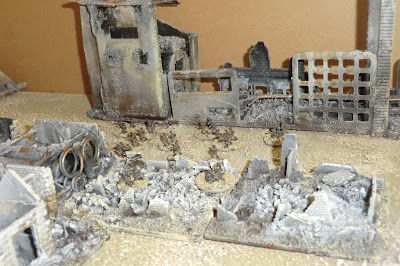 I then made some foundry-like buildings with thicker chimneys and very solid structure. You can see part of one on the left above and here is the other side of it below, together with a smaller one. Both are, as is my habit, made with all sorts of bits of wood and plastic moulding from the bits box. I'll admit the left hand one might be at home on a futuristic Warthammer 40K battlefield but I'd been looking for an excuse to use those plastic curved 90 degree corner plates for years! It was certainly fun making the simulated metal and concrete and liberally applying the rubble and rusting girder effects. 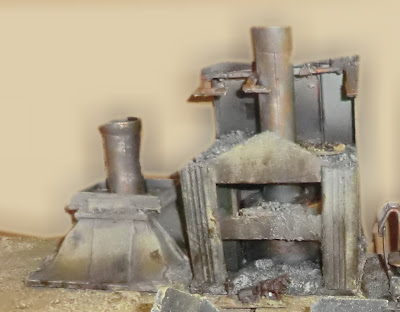 I'll finish this post with some overall views of what I've done so far. I guess I'll need at least 5 times this area of ruins to make  a game feel right. 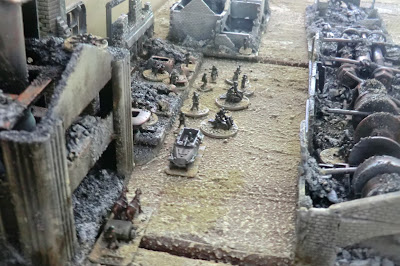 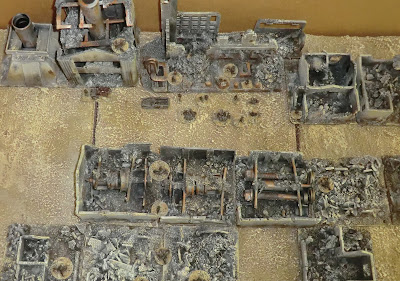 A word on the overall base. This is just part of a collection of brown terrain tiles I made for a WW2 desert game last year, so no roads modeled in it. However, I think it's good enough to get me started and in the longer term (when I have space again!) I'll model more tiles with the required Stalingrad ravines, trenches, bomb craters etc.