Anticipation
The preparation had been done - terrain sculpted, maps received, Imagi-Nation armies deployed as historic ones, wargamers readying themselves for Chris and Kevin's birthday game 2019. It was to be the first real battle of the Seven Years War - Lobositz. Probably one of the most replayed battles of the SYW for 18th century wargamers, and now it was my turn to stage it.  That was the first weekend of February and the snow began to fall on Gloucestershire's Cotswold Hills........

My wargames room is 600 feet above sea level and receives whatever the prevailing South-west wind brings in from the Atlantic - beautiful warm, sunny breezes in Summer but icily chilled H2O in Winter. We had about 6 inches of snow up here during the day and I had high hopes that it would melt as my five players were coming from distant points North, South, West and East, and even so the last 7 miles from either Stroud or Cirencester was not to be messed with. But it did not melt enough, so I had to postpone it.....

Postponement
Reorganising to suit everyone proved impossible. Honours of War (HoW) author, Keith Flint, was due to play but sadly his work schedule proved too difficult in late February and March. My old friend Richard Newcombe could not make the same day as the others, what a dilemma........... But, let's turn a sad situation to advantage. It was to be Richard's first go at HoW so what better than to use the game as a gentle tutorial with him playing Austrian, as originally intended, and me taking the Prussians. So we found a date in the middle of February........

The practice game
Gentle?!  Within five moves our Dashing C -in-Cs and cavalry commanders had seen to it that all the commands had become fiercely engaged and several obliterated, and the maximum loss Victory conditions I had set had been smashed by both sides, so we called it a draw and I had learned a lot about what might happen when the other three were to play three weeks later. Richard had enjoyed it immensely though and that was a huge plus.

Lobositz - the main game
Background
Although I read every account of the historical battle I could find and compared it to the many published wargame refights (Charles Grant's probably being the most well known) I settled on the one Keith Flint has published in the Honours of War rulebook. He has done a lot of work to represent the historical armies and with a bit of fiddling to make various small, standard and large sized units, I found I could represent the forces at approximately 1 x 28mm figure being 100 men.  Tactical units were therefore brigade-sized, infantry 18 or 24 figures, some made bigger with battalion guns attached. Cavalry were nearly all 12 figures. How much artillery for balance could have been a  problem but Keith had set the game out using HoW so why not stick to his 3 Austrian and 5 Prussian?
Below are the maps given to the commanders - Ken Marshall was Marshal von Browne for the Austrians and Kevin East and Guy Barlow playing Frederick (the Great?) and Marshal Keith respectively.
Being a bit of a scale pedant I reduced the ranges from the standard rules to:
Muskets - 10 cm; Battalion gun equipped brigades - 20cm: Medium guns 60 cm and Heavy guns 90 cm.  No fancy movements within 10cm of the enemy. Bounce through/grazing distance - 20 cm. But pretty much everything else stayed the same, so standard infantry line movement - 20cm, cavalry 30cm.  This probably meant that each turn could represent about an hour of historical time

You can read the detailed briefs in the Download section on the right hand side bar. Here is a link  18th Century Historical

Context of the battle
I guess most of my regular readers are familiar with the history but for those who aren't here is the briefest of context statements.  Frederick had sensed war coming with the Austrians so he pre-empted this by invading Austria's ally, Saxony. The Saxon army bottled itself up in an armed camp at Pirna awaiting rescue by the Austrians, who in turn were now on the move to confront the Prussians. Frederick took a part of his army through the mountain pass south of Pirna intending to see off whatever Austria cared to throw at him.
Von Browne was a clever general though and realised that where the large River Elbe flowed past the town of Lobositz, with the marshy Morrellenbach just to the South, was an ideal spot to catch Frederick as he emerged from the bottleneck of the valley between the extinct volcanic cones of the Lobosch and Homolka Bergs. He deployed his Vanguard forward of Lobositz and light troops onto the Lobosch, while keeping a strong force back along the Morellenbach where it was concealed by the river mists. More of his army (not represented in this scenario) awaited a mile or two back with the expectation he could fall back on it if necessary.
The Prussians came out of the valley in the early morning of 1st October 1756 and could only observe a limited part of von Browne's army which Fred took to be an insignificant holding force. He deployed for attack across the narrow valley mouth and round the lower slopes of Homolka Berg.

Game deployment and plans
I deliberately did not give either side a free hand as I deemed the tactical options interesting enough as they were, but I did give them scope to arrange the brigades of each command and artillery with some latitude within the broad historical deployment zones.
Austrian: Those who have the HoW rulebook will see similarities with Keith's map in there, but the most significant change was that Ken eschewed the option of light infantry in the sunken road between Lobositz and the Chapel and opted to put them instead as yet more reinforcements to his right flank at the Lobosch Berg. His plan was simple:

These are the Victory Conditions I set the Austrians:
"If you have not inflicted a serious reverse on Frederick by close of play you must be in a position to retreat via Squares F1 - F6 with at least 10 units out of your 21 having no more than 2 Hits each."


Prussian: Kevin's choices were pretty limited and to his credit he did not read the HoW rulebook scenario or read up on Lobositz historically - "I did not want to read about my demise in advance and be put off!" was his excuse.  He decided to mass most of his artillery on and round the Homolka Berg where he had the best chance of not being blocked by his infantry or cavalry advancing. His plan had some complex nuances in view of delegating some of it to Guy but in essence was as follows:


I had set these Victory Conditions for the Prussians:
"You must defeat this rear guard and any emerging forces completely and press on towards von Browne’s camp via Squares F1 - F6 by close of play on the day.   In doing this you must have at least 5 non-artillery units with 2 or less hits.  If at any stage of the battle you lose 6 or more units "Done For" then Frederick will leave the battlefield and ride back up the valley towards Pirna". 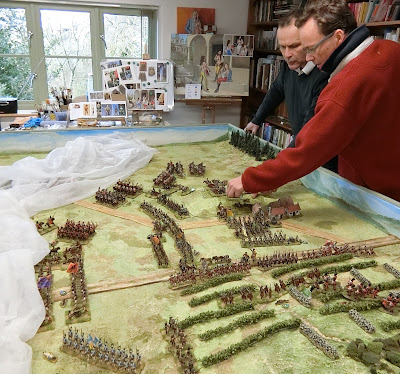 The mist clears and Austrians advance 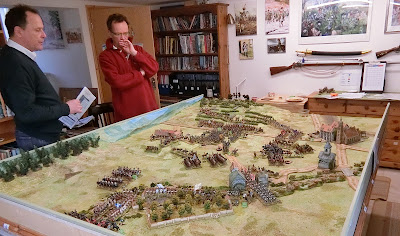 Continued Prussian attacks in the Centre and also the Right Flank

Austrian counter attack from the Morrellenbach

Some Prussian progress at last in the Centre

Mixed fortunes for both sides


The Austrian "retreat"
At this point Ken consulted me for clarification of his Victory Conditions. I deemed that he had indeed inflicted a severe kicking to the Prussians and was poised to follow up on their flanks should he wish to do so. The way, essentially, was still open back to his main army, and he could retreat with honour if it got no worse. Could he manage that and recover enough to fulfil the "10 units" criteria I had set?

The Result
It was now around 5.30pm real time and about 3pm game time, and Kevin declared he had to go home now (we had allowed him to retain some tactical commands even since Fred had left the field).
All agreed we had played enough and it was time to tot up the losses to see if either side had fulfilled the Victory Conditions.

The Austrians started off with 21 Units and had lost 7. Prussians originally had 20 and had also lost 7 by close of play - plus the Cuirassiers forced off in "extra time" = 8. It could hardly have been closer fought.
But more significant was that Kevin and Guy only had four non-artillery units with 2 or less Hits lost so were too shattered to claim victory. How had the Austrians fared?
Ken found he had 11 units with 2 or less Hits which was one more than the minimum and he was still in a position to retreat to the main army so was declared the winner.

Here is my running score sheet 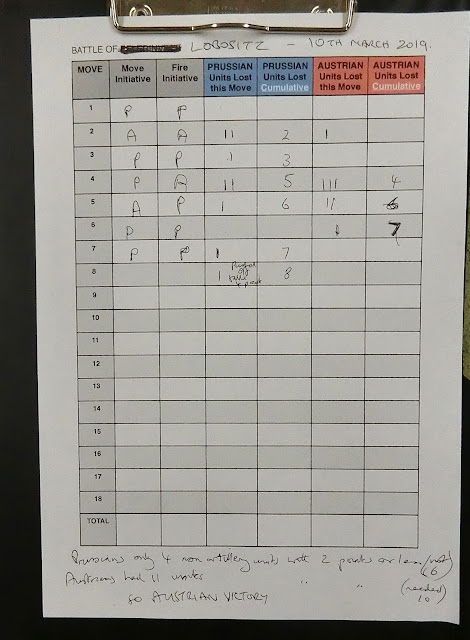 For me it had (maybe surprisingly) been the first historic SYW battle I had organised and staged, and using the guidelines set down by Keith Flint's scenario, had worked a treat. Thank you Keith. Honours of War, with my few changes,  had come good yet again for our little West Country group.

The atmosphere was really convivial with old friends for my, albeit much delayed, "birthday game" , and everyone seemed to enjoy it. Ken seemed pleased that he had a plan, and it worked. You can't often say that in wargames!

By Ken:
By Guy:
Well done to Ken for giving us such a good kicking. Revenge will be sweet…..

By Kevin:
Frederick would like to make a few comments in relation to his recent little 'skirmish'.