Keeping a blog is fascinating as you have access to the statistics of visitors in various ways. My posting featuring light blue uniforms  - Lauzun's Legion  - has proved the third most popular of all the 25 posts I have made so far, showing that many of my audience has a liking for light blue uniforms. One of my art clients got into an email discussion with me about Marshal Massena's mistress, Henriette Leberton, whom Massena took on campaign "disguised" as a cornet of dragoons. However, both my client and I agreed that much more fetching military attire for a mistress in the blackpowder era would have been that of a hussar, and this led to speculation on my producing one or more Napoleonic style "pin-ups" to prove the point. In the end he commissioned  me with painting a pin-up in classic pose but put back 200 years or so and seated on a cannon instead  of a classic car and presented in the alternative Lauzun Legion officer's uniform of 1778 from Digby Smith and Kevin Kiley's "Uniforms of the American War of Independence, 1775-1783" 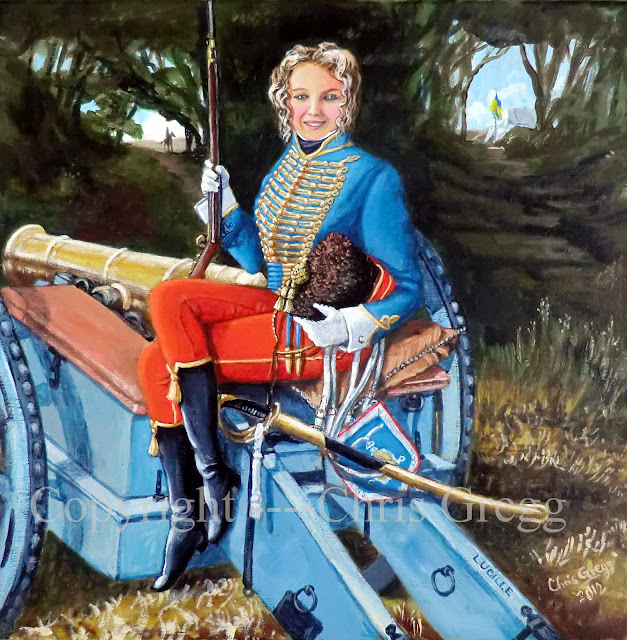 I thought if I was to do this properly I needed to follow the example set by Detaille, Meissonier, Rocco, Troiani and other serious artists of military themes and acquire a uniform and authentic equipment, not to mention hiring a suitable model. So I did and since I like doing military paintings it seemed a good opportunity to take many reference photos of both male and female hussars which will stand me in good stead for the future. So now I'm well equipped to take more commissions and can offer almost any hussar, chasseur, light dragoon style uniforms in poses from battlefield action to off duty and even lady hussars wearing all or little of their uniform.

This can, in fact, become an adjunct to Imagi-Nation wargaming. If you've designed a natty uniform for your tabletop regiment why not commission a painting of its colonel for your wargaming room?

The  painting of Lucille is in acrylic on a smooth gessoed canvas ground and is 16 inches square, large enough to show good detail. It has already been sold to the client who won't mind me saying it was priced between £150 and £200. I expect that most future ones that I do will be smaller and they will start at about £80, but any size and price can be considered.

So if you have an interest in commissioning something hussar like, male or female, at war or at play, mounted or dismounted, please feel free to email me for more information without obligation at Chris Gregg . Of course I can do other military subjects too, as former CWJ readers will be aware.
Or, if you prefer I will be compiling a mailing list of anyone wishing to see future paintings of hussars or hussar ladies, so please email me if you'd like to be added to that list.
And failing that, comment on this blog to let her proud new owner know what you think of Lucille!

Some of my other military paintings can be seen here
Chris Gregg Military Paintings
Posted by Chris Gregg at 00:13