Some readers may have read the article in the latest "Miniature Warfare" pointing out a new, but little-known, restriction by Royal Mail whereby they will destroy consignments of water based paints if they exceed 4 x 140ml pots.

I don't often buy paint by post for my figures, using mainly Citadel paints from the local Games Workshop. But my location will change soon and I will become more dependant on the postal system for my model paints and my artist paints. While the model paints are in small pots of 20ml many of my artist tubes and plastic bottles are various sizes up to 250ml. So I find this a worrying development and wonder where it will go next if we just roll over and accept it.

A petition is available for you to sign if you agree that this is regulation going too far.  You can find out more information here.

I had planned only to show you the spectacular side of this project, like the 140 strong battalions, but there are now five of us beavering away at 28mm Waterloo items of various descriptions for any of our four intended weekend scenarios, and it's good for our morale to publicise the efforts. If you need a reminder here is a link to the previous post

Kevin's spreadsheet says we will need about 600 British Foot Guards figures for Hougoumont, and although not all at the same time, so we can "recycle" some, we will need a h**l of a lot! Our newest contributor, young James Fergusson, has made a good start on his first company - half of the Light Company of the 3rd Battalion, 1st Foot Guards.  I believe they are Perry plastics and are mounted three to a base so they can easily man the Chateau or garden walls. 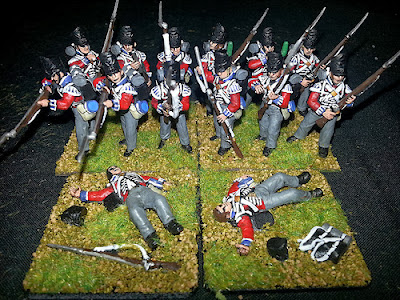 I've made a small start on some of the British cavalry which will be backing up the infantry holding the "Elm Tree Crossroads" above La Haye Sainte.  The 2nd Life Guards of the Household Cavalry Brigade were in the closest proximity and took part in routing the nearest French elements in the first attack by D'Erlon's Corps. There were only about 235 of them in two squadrons so I'll be needing about 80 figures to represent them, of which I believe Kevin and Paul  have about 30 or so in their existing British armies.  So here are my first 10 towards the remainder. 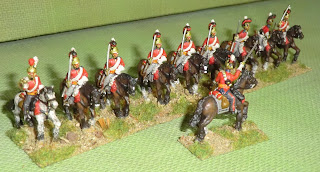 I bought them unpainted on Ebay, some had separate right arms and torsos so glued together in slightly exagerated positions. Never mind, they were cheap and an interesting first step with this unit. If anyone can identify what make they are I would be interested to know. There are apparent anomolies in the uniforms but not big ones. For example the horse furniture does not have a sheepskin shabraque but has a rolled overcoat across the front of the saddle. I've painted these as if sheepskin as i hope my next btach will be more accurate. These are OK from "wargames distance". 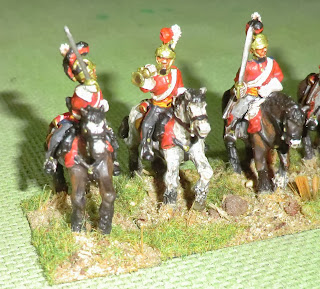 The officer's twisted body and raised sword makes him good for doing the rousing speech urging his men towards valiant deeds.....not that British cavalry needed much encouragement at Waterloo! 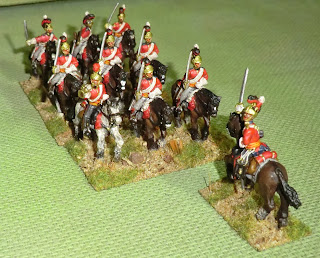 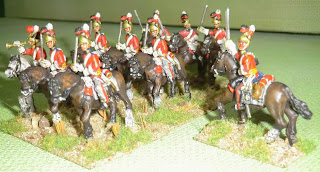 I used the useful, though not always 100% reliable ,uniform guide on this website 100 Days - Mont St Jean
coupled with some very fine photographs of re-enactors of the 1st Life Guards in  "Wellington's Army, Recreated in Colour Photographs" by Neil Leonard- Europa Militaria Special No. 5, Windrow and Greene publishing. 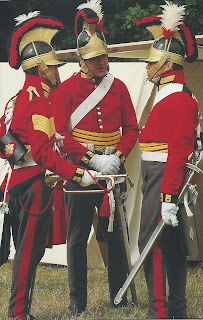 Just to get in the mood, on a recent visit to the capital with the Duchess I persuaded her that two central London military related venues would be an entertaining use of her time. I'm a very lucky man that my wife likes anything to do with horses and stately homes. So, firstly, we went to the Household Cavalry Museum at Horse Guards Parade, Whitehall. This is a small museum, but very nice with snapshots from the Horse Guards' history, and a part where you can view the stables at close quarters. Here is a relic of a Waterloo helmet. 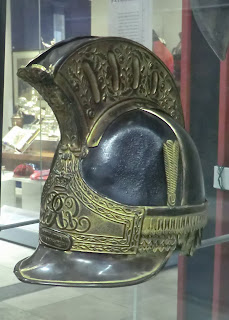 We got the timing right and were able to witness the 11 am changing of the guard, where one group of about a dozen Household cavalry took over, with much ceremony, their 24 hour shift  from the previous group. These are the men who stand unmoving at the sentry boxes on Whitehall in pairs. When not mounted they take turns at other duties around the entrance gate, museum and stables and at that time of day you can see them, through glass, settling the horses into their stalls and unsaddling. If you go I strongly suggest trying to fit in this mid morning ritual. Here's the website household cavalry museum

After lunch in St James Park we walked on up past Buckingham Palace to the corner of Hyde Park  to Apsley House, the former residence of The Duke of Wellington. It has a very large art collection but, as with most similar historic properties, the light is somewhat dim to protect the paintings. What struck me most was the number of fine gifts given to The Duke for his services in ridding the Iberian Peninsula, and Europe, of Bonaparte, and the collection of Spanish old master paintings looted by the French and captured by the British at Vitoria in 1813 . Why have the Spanish never claimed them back?

To be honest the military history itself is very low key and one visits this place more out of reverence for the many years spent there by one of the most famous generals n British history, than to learn anything new. It was good to see two famous Waterloo paintings - those by Felix Philippoteaux French Cuirassiers attack squares  and Sir William Allan From Napoleon's position at La Belle Alliance.  Worth a visit if you like classic art and 18th century architecture but it is now closed for refurbishment till April 2014. 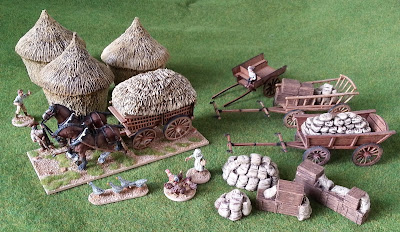 Well, that's the artist's own description for Kevin East's latest painting of 28mm miniatures and he claims they can be used for Waterloo!


"Crazy I know..............but I enjoyed it.
Whilst I was looking after my Mum in Cheltenham and when there were quiet times I managed to paint a few items I had. I didn't want to paint troops which would have required a greater amount of time and more concentrative effort. So the results may or may not be useful. It doesn't matter as I enjoyed painting them as it didn't take long. See attached photos 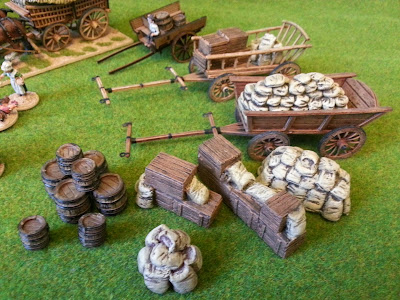 All wagon contents are removable and interchangeable and the wagon with horses is removable from the base and can be used on its own. I have several model barrels as well. I do need to get a gardener for Hougoumont as I think the girl feeding the chickens can be used as his daughter. 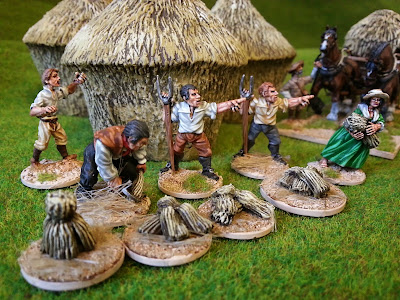 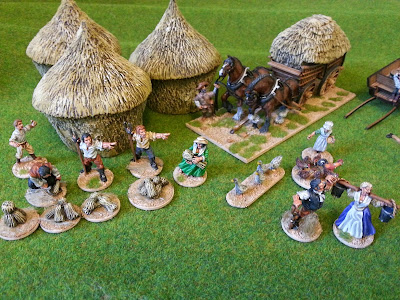 I have a British supply wagon to paint next which can be used as the ammo wagon for one of the Hougoumont scenarios. Maybe La Haye Sainte might find use for it too,  possibly.

By the way none of this is impinging on the very important painting of troops. I am now painting batches of over 50 at a time which seems to be a good experience and not having an effect on the quality of workmanship. More importantly it keeps me on schedule ( I only used to paint a max of 36 at a time). I have 57 French infantry to finish in 14 days worth of effort. 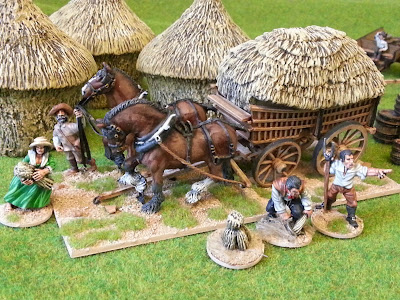 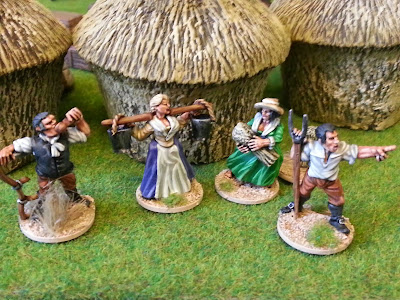 The few civilian farm workers who are cutting crops which are in the photo are Wargames Foundry but the other figures, hay wagon, haystacks, boxes and sacks are by Hovels the miniature building manufacturers. The ladder and plank sided wagons are by Trent Miniatures, each of which comes with four horses. The two wheeled cart is made from 2mm laser cut MDF and comes as a kit by 4ground. It only took 10 minutes to assemble and didn't need painting. As a result it's not as realistic as the metal painted wagons at close quarters but is excellent value at only £3.60 from Warlord Games.  I also have many plastic barrels made by Renedra. So all the models cover many aspects of production including resin, metal, fibreboard and plastic. Quite a concoction. Finally, the base sheet is a grass paper mat from a model railway shop"

Great job Kev.  However we use them I thought them well worth bringing to my visitors' attention. See the right hand sidebar for Guest pages featuring Kevin's expertly painted military models . You'll notice that Kevin is now toning down the eyes considerably for newly painted miniatures, I look forward to seeing more of them.
Posted by Chris Gregg at 00:07 3 comments: