Long awaited, I now have my copy of Stuart Insch's first self published wargaming book "Wargaming the Sugar Islands Campaign", subtitled "A Guide to the British Expedition to Martinique and Guadeloupe in 1759". 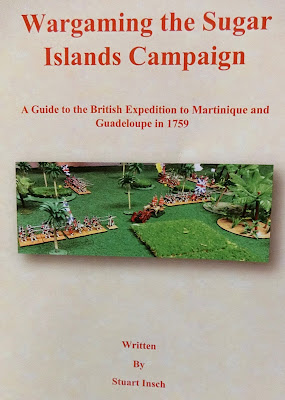 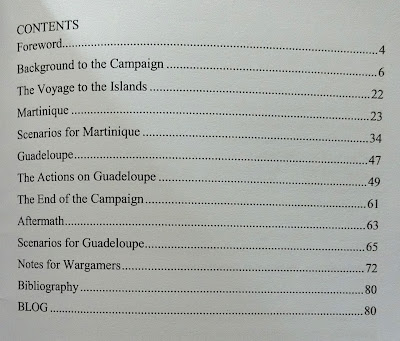 The book "does what it says on the tin", and very well too. Most of us know about the Seven Years War and the French and Indian War and have more books on them than we can ever read so why buy another? Well this one is an ideal adjunct for the experienced 18th Century wargamer with ready armies and a batch of armed civilians to call on, or for the newcomer who wants to start very small and build up. By taking little known contemporary accounts, analysing them as only a wargamer can, and giving you what you need to know but not too much, Stuart is making some new wargaming material available at a very affordable price. Oh! I forgot to say it is only £8.00, and apart from the history and a guide to making and painting the various units and regiments involved, contains 6 very user friendly wargame scenarios.

These are all a bit different and include varying techniques and some special rules too. They cover  the use of French and British regulars of various kinds, marines, sailors, artillery, militia, armed civilians and slaves and even a few plantation womenfolk. Better still Stuart has included a simple but effective way to link the battles as a small campaign.

There are no photographs (apart from the small front cover one) of Stuart's games in action, which is a shame as they are colourful and beautiful, but you can see some on his blog, such as this post sugar-islands-on-tour. The blog is also where you can order the book, via the message facility on the right hand side, and this post explains further now-available-wargaming-sugar-islands.

Each scenario has a lovely computer drawn map, using an approx 6 x 4 table format but Stuart points out that he is not prescriptive about scale or rules and he uses historical companies or similar sized groups which offers the player the choice of using just a few handfuls of figures per side or hundreds, depending on your taste and resources.

There are a few near contemporary illustrations and maps which are of moderate use, depending on your eyesight, but do add some atmospheric "colour". Among the latter I count my own humble contribution which came about like this.........

I'd been reading Stuart's posts on the "A Military Gentleman" Forum in early 2017 about these "sugar islands" and it seemed quite fascinating though I had plenty of other distractions at the time so thought not too deeply about it. That is until I exhibited my military artwork at the AMG Kenilworth meeting that June and Stuart and I found ourselves together facing hoards of Highlanders led by "Bonnie Prince" Purky at Falkirk.


As one does, the occasional lull in the game prompted conversation and Stuart broached the subject of me doing some drawings for his planned book. He piqued my interest by pointing out that it featured one Madame Ducharmey, a plantation owner, who armed her slaves and followers and led by example in the front rank!

Guided by Stuart I got to work with Mr Google and found a number of original references to the campaign and Madame Ducharmey although no description or age. It turned out Stuart and I both had in mind Delacroix's "Liberty leading the People, 1830" as a guide to what we were after, only fully clothed! So this is where we started: 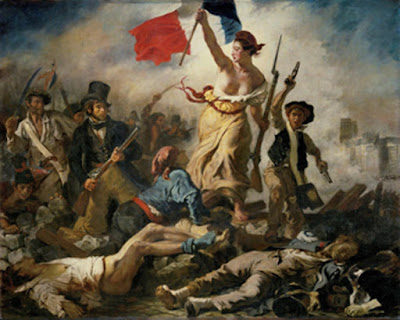 It just happened that I was doing an informal art photoshoot with a friend who is a beautiful "mature" woman of Southern European heritage and I thought she would be ideal as the plantation matriarch yet still young enough, and fit enough, to (wo)man the barricades. I always protect the identity of my female models, so we called her Marianne, and I've promised not to use her face recognisably in my art.  She was excited by the prospect of dressing up and using many of my reproduction weapons to recreate various women in the plantation entourage - both pale and dark skinned. My research had shown several references to women in the plural in the fighting so we created about 4 or five different characters and dozens of poses with clothing, weapons, hairstyles etc and in the end poor Stuart had to rein in my enthusiasm and just four made it to the final barricade.

I needed lots of men of course, especially as the other drawing was to be of French Marines and local
militia ambushing a column of British regulars on a jungle path. I have a very gifted artist friend called Andy, who is a fine figure of a man with a neat moustache and goatee beard, who could pass for a Frenchman. and is slim a bit like a campaign-hardened 18th Century soldier. He was up for the challenge of taking on all the characters I needed, including the British, and sundry shots for other military projects, over several hours of photoshoot. Here are just a couple as examples. A plantation civilian with a pistol and a British regular on the receiving end of something nasty. 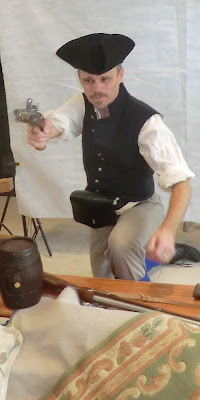 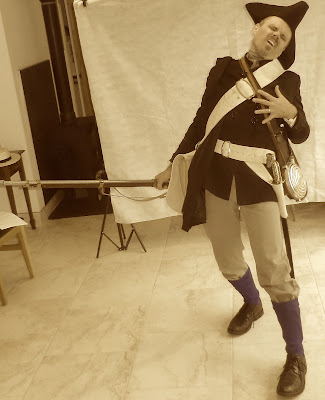 With these and other paintings in mind I had acquired some authentic leather belt and shoulder worn cartridge boxes, infantry sword and belt, and a Charleville musket and bayonet. The waistcoat and water canteen are from my American Civil War re-enacting days. I also acquired a few large sized ladies coats very cheaply on Ebay and converted the cut to resemble 18th Century military wear. As I've said before, accuracy of clothing is less important since I can paint it how I like.

My method is to choose a suitable background and modify it in Photoshop and then cut and paste all the suitable figures I need from my photoshoot archives onto the background, placing and re-sizing each one till I get a satisfying composition. A print of the design is made and the whole transferred to the size of art I'm making. In this case quite small - about 7 inches x 5 inches since they were intended for publication in a small book. I then work the pencil drawing up in fine liner pen and shade with Indian ink wash by brush.  A rubber can come in handy and some "white" Indian ink too, and in combination you can fade out some areas and build up the smoke etc. It's stupidly painstaking but I wanted to do my best for a fellow wargamer who was working so hard for our pleasure.  I got paid for the originals but was still hoping the result would bring something special to the book.

While apologising that he's not a professional publisher Stuart has done his best to present the illustrations, but something has got lost in translation and in the printed book they have got squashed by the title. I'm disappointed and want to ensure purchasers can have a decent version so I'm publishing them here too.

I'm giving permission for those who have the book and wish a better copy to download them and print at a size to suit you. Others I hope you enjoy them, but the copyright remains with me so please do not repost etc without correct attribution to me as the artist and Stuart Insch for his patronage, and a link back to this post.

I've got lots of useful archive materials from these two photoshoots so if they inspire anyone to commission some drawings, or an acrylic or oil painting just email me to discuss without obligation.

Buy the book - it's a good read and useful resource.