I thought it would be nice to add a Guest Gallery so I can publicise the great modeling and wargaming being done by some friends who don't have their own blogs, or any other means of exposure.
Ian Allen of Bar Hill near Cambridge has been sent me pictures of four games he played solo over the Christmas and New Year break. I'm using his words to describe them with some extra explanation in italics.

"I had a great break with a quartet of great games played over the holidays. I’ve just gone through the photos I took and I’ve attached a “taster” for each.
The ACW "Ned Min's Farm" game (Simplified  Battle of Minden based on Wargaming in History Volume 5) was great fun using the BlackPowder rules and resulted in a victory for the Rebs (Allies).
(Prior to the game Ian wrote: ...)The Yanks are playing the part of the French and the Rebs play the Allies. Maulbeerkamp is represented by the farm, which yankee cavalry have occupied and the other villages replaced by rocky outcrops. “Sackville’s” cavalry are on the far side of the wood.  As I’ll be using BlackPowder I thought I’d give him a low leadership to start with, say a 5, which should ensure that he doesn’t act too soon if at all – once he does act I’ll return his leadership to normal to ensure a good game.
The figures are 25mm Dixon, the Farmhouse is the Perry plastic kit, the fences are from GW and the trees are from Modelzone – bags of 25 in assorted sizes.
“Sackville” took his own sweet time getting the Reb Cavalry into action but they were sure effective when they did – the Virginia Black Horse put Rush’s Lancers to flight and followed through into an artillery battery, putting that to flight too! One of the Reb infantry units got over excited and charged right up to the farm where it engaged the dismounted Yankee cavalry. After a prolonged firefight all along the line the Rebs prevailed and the Yankee cavalry covered their army's withdrawal. 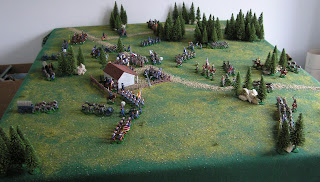 The Battle of the Bulge game used the Grant rules from “Battle. Practical Wargaming” and I have to say they were very, very good. The German assault pushed the Americans out of their front line positions but at the expense of half of the armoured and infantry motorized units plus the destruction of their armoured cars and immobilisation of their heavy armour. The Yanks lost more heavily, but they had blunted the spearhead allowing time for units to set up positions to their rear. A great fun game and I’m looking forward to the “Battle” rules being re-published by Partisan Press later this year with additions from Charles and Charlie Grant. 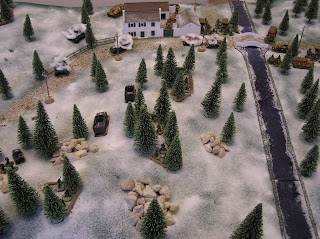 The Darkest Africa Game was a colonial take on Teaser #10 from Battlegames – “Caught on the March”. (Ian has an 1880's East African Imagi-nation campaign in "Umpopoland", and incorporating white explorers and archaeologists.) The Boggs-Bell expedition nears the Yorke farmstead when it is beset by M’Popo, Rugga-Rugga and Baluchis. It was a close run thing, but the explorers firepower saved the day. This turned out to be quite a quick game but quite entertaining – although the natives are terribly outgunned 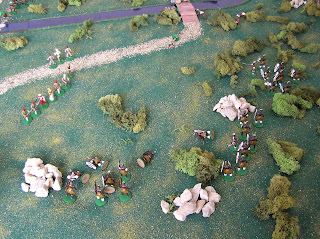 (The figures are "toy soldier" types called Deutsche Homage by Irregular Miniatures. You can see more of them here 42mm Deutsche Homage. Not my taste in figures I'm afraid but each to his own :-) )
The Big Bethel game is an ACW scenario from WSS #56 which I’ve been meaning to try for a while. I used BlackPowder rules and have to say that for a frontal assault this game was great fun. The Yankees stuck to their purpose. Although the supposed flanking/distraction force achieved very little,  the main attack went in after a lengthy firefight broke the Reb infantry in the forward defences. Faced with being over-run the Reb gunners ran their howitzer down the backslope and into the river before swimming it to the safe bank! Once a second Reb infantry unit broke, their commander led his troops from the field leaving the Yankees in possession of the bridge and one of his two howitzers – the other being at the bottom of the river! 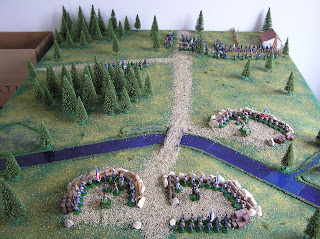 All in all a great four games I hope you enjoy the pictures.
I managed to play 66 games last year, of which 12 were DH Darkest Africa, 10 were 28mm ACW and 8 were 20mm Vietnam. For 2012 I think it’ll be more ACW and some more WWII. I’ve already added another artillery unit to the Rebs and there is a Yankee battery on the painting table half finished at the moment. Another unit of WWII US infantry is waiting in the paint queue as well.
I have a few more “mad” ideas – but more on those later."
Thanks Ian - they all look very nice. Your total of games is truly impressive - Readers - is this a record?
If readers want to know more about Ian's games or figures please comment on this posting or email Ian directly at Iallen@cdtltd.co.uk