Part two of this expose of my latest two battle paintings continues on from the posting about  "The Railway Raid".  This one is based on my original ink drawing for Chapter V of the "Tales of the Golden Head" in The Classic Wargamers Journal in 2011. Here is a reminder of that. 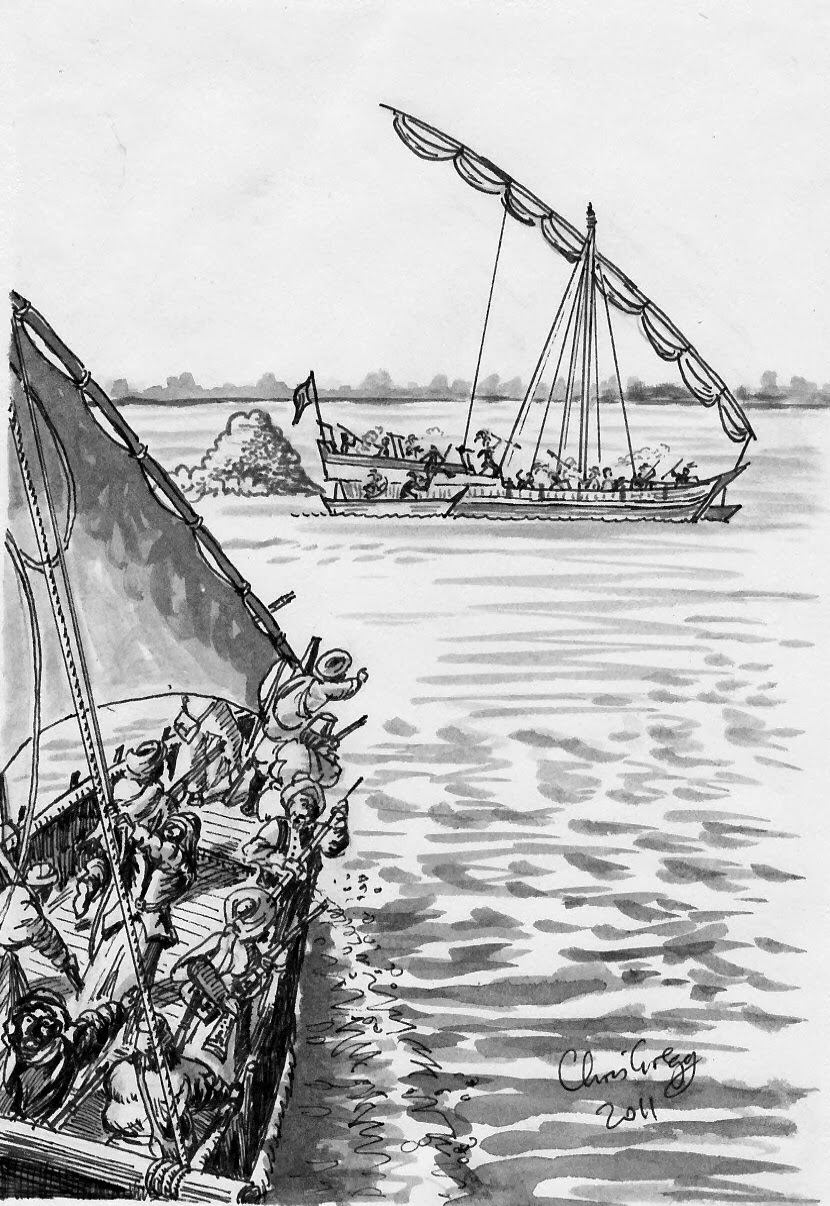 The brief from Ian was for an oil matching the "Railway Raid" in size and orientation and again opening out the scope of the scene to give more of the character of his original wargame. Some readers may recall that the hero Wagstaff party was trying to get the Golden Head out of Umpopoland and had got a lift on a small steam boat, "Africa Queen", which had brought them to the estuary mouth to meet up with Arab trader, Sallah, and his impressive dhow which was to ferry them up the coast. As they got on board Sallah's ship they were attacked by canoe-borne natives, shortly followed by the ruthless Zanzibari slaver gang led by Sidi.  I was instructed to take a seagull's eye view of Sidi's dhow and crew, to show the fight on Sallah's dhow in detail, and to give an impression of the vast African hinterland beyond.  This is what I came up wth. 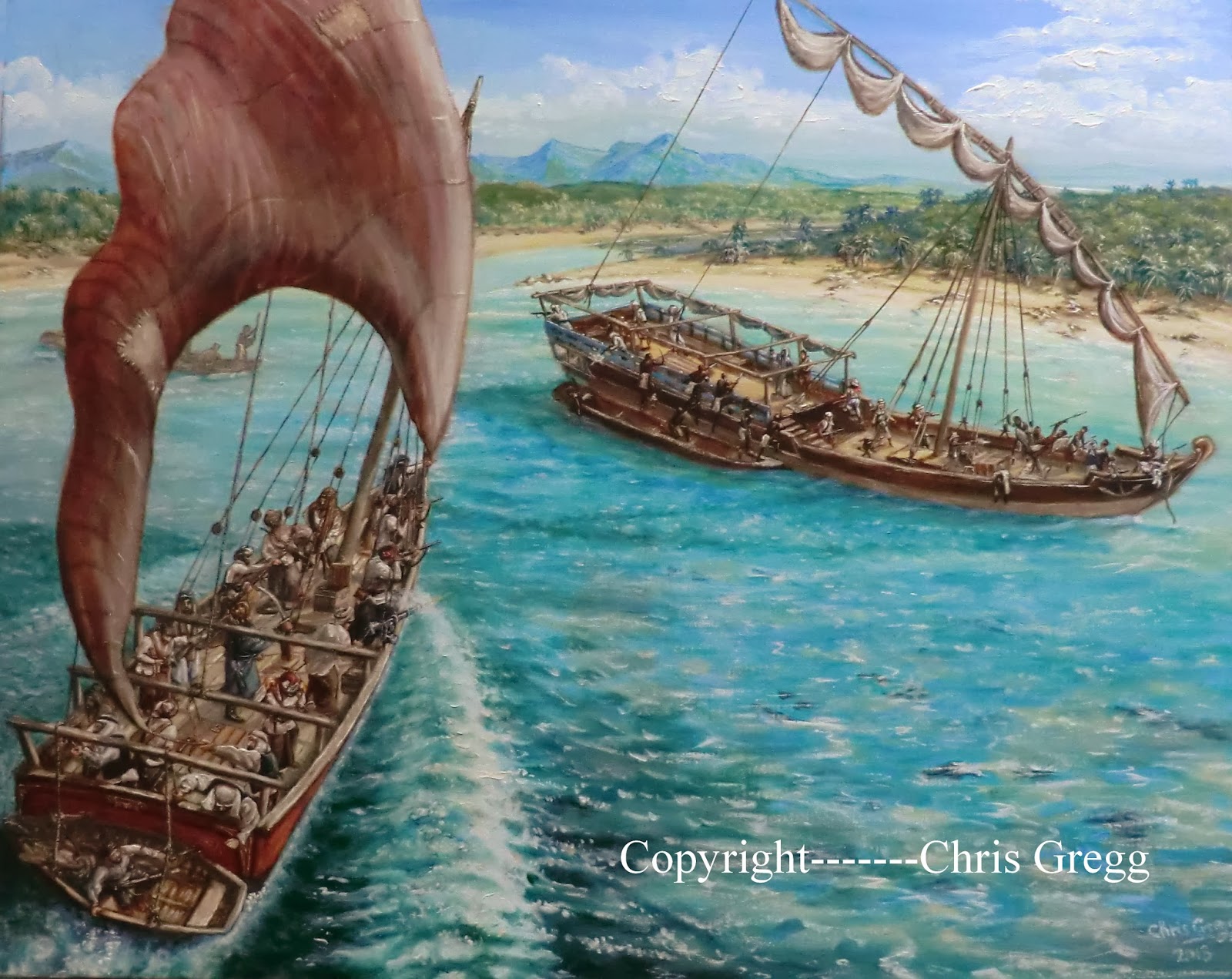 I had to do a serious amount of research for this, even though it is fictitious, in order to give the dhows some plausibility as sailing vessels and to tackle the odd perspective to show lots of activity on both ships. The "pirates" dhow is pretty basic with no below-deck accommodation and just a cargo hold. Part of the unwritten plot is that Sidi wants to capture Sallah's dhow which is large and has some of the luxuries of successful trading such as a deep cargo hold and a "quarter deck" over the captain's and guest cabins. A wooden framework surrounds this deck with canvas curtaining folded back which can be draped over to give shade. All the block and tackle rigging is taken from diagrams and photos off the internet, and much peering down into small sailing ships by me at the fabulous "Tall Ships Festival", practically on my doorstep at Gloucester Docks last Summer. Gloucester Tall Ships Festival 2013

Here are some more detailed views, click to enlarge
Sidi waves his sword to encourage his motley crew to form a firing line to deliver an undiscriminating volley on Sallah's crew, the natives and our heroes alike. 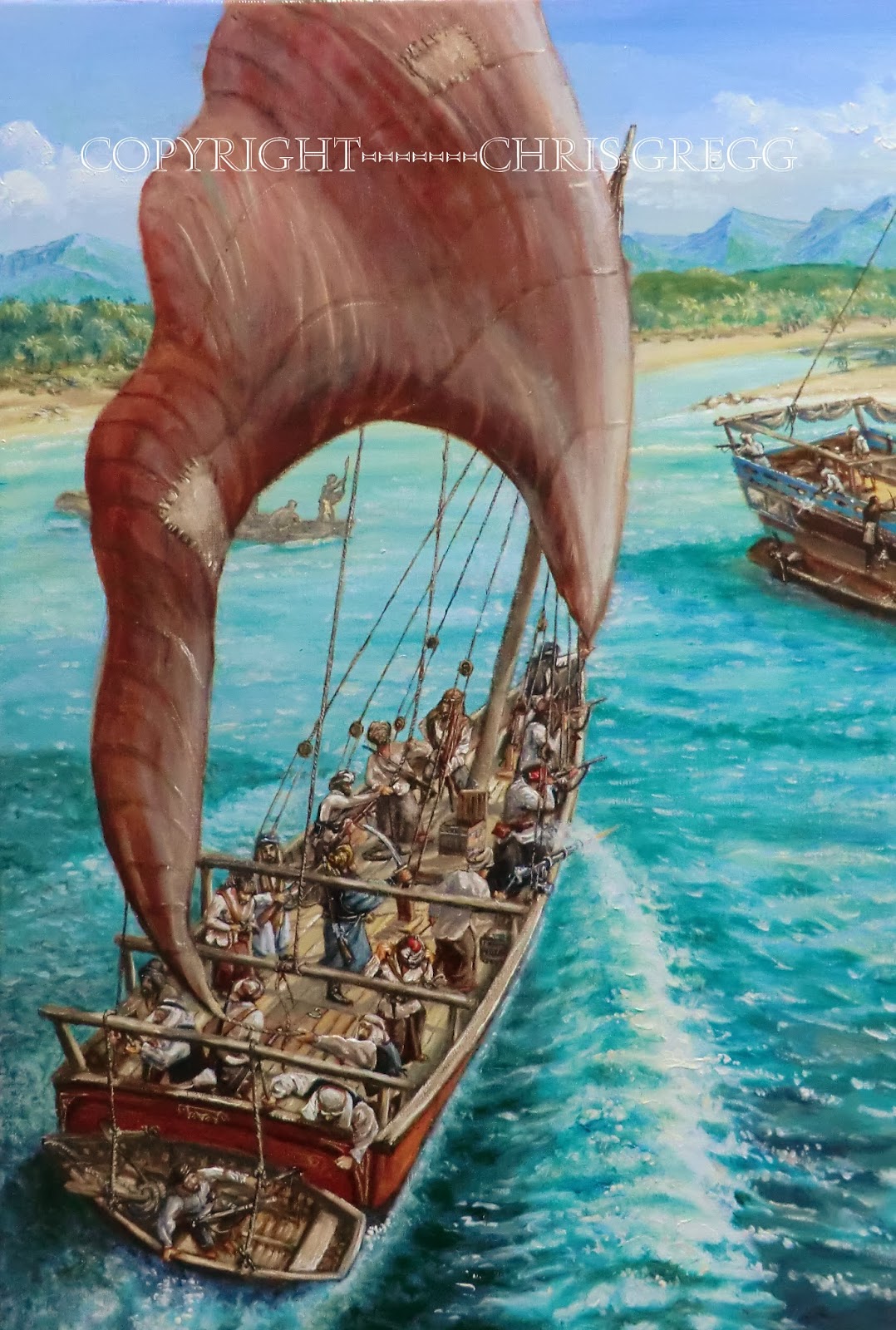 The natives have attacked from two sides. At the bow the crewmen have been quickly disposed of and spear bearing warriors are heading for our heroes. Over the starboard side near the stern another canoe disgorges its load but they are met with some opposition and a ruder greeting awaits across the deck . 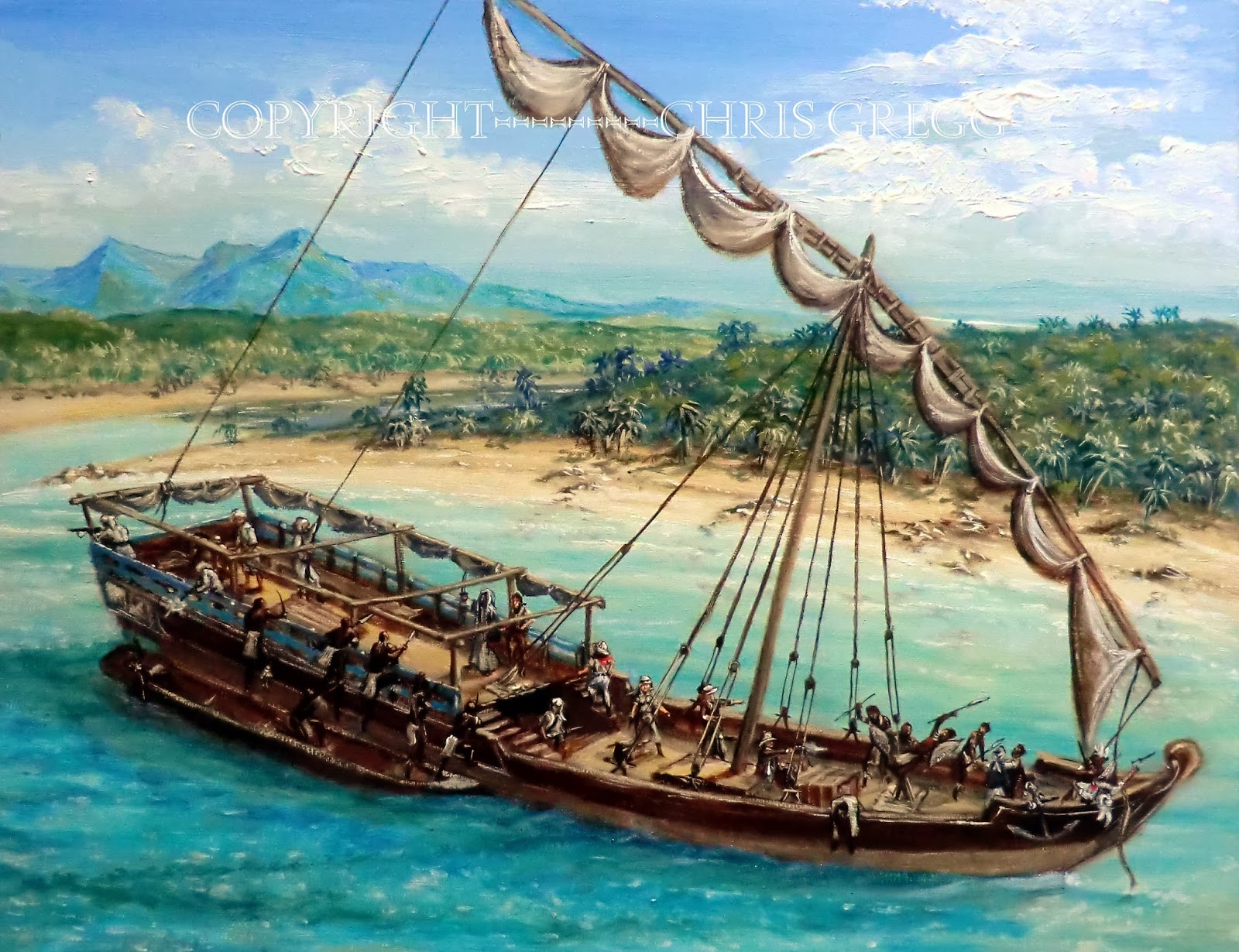 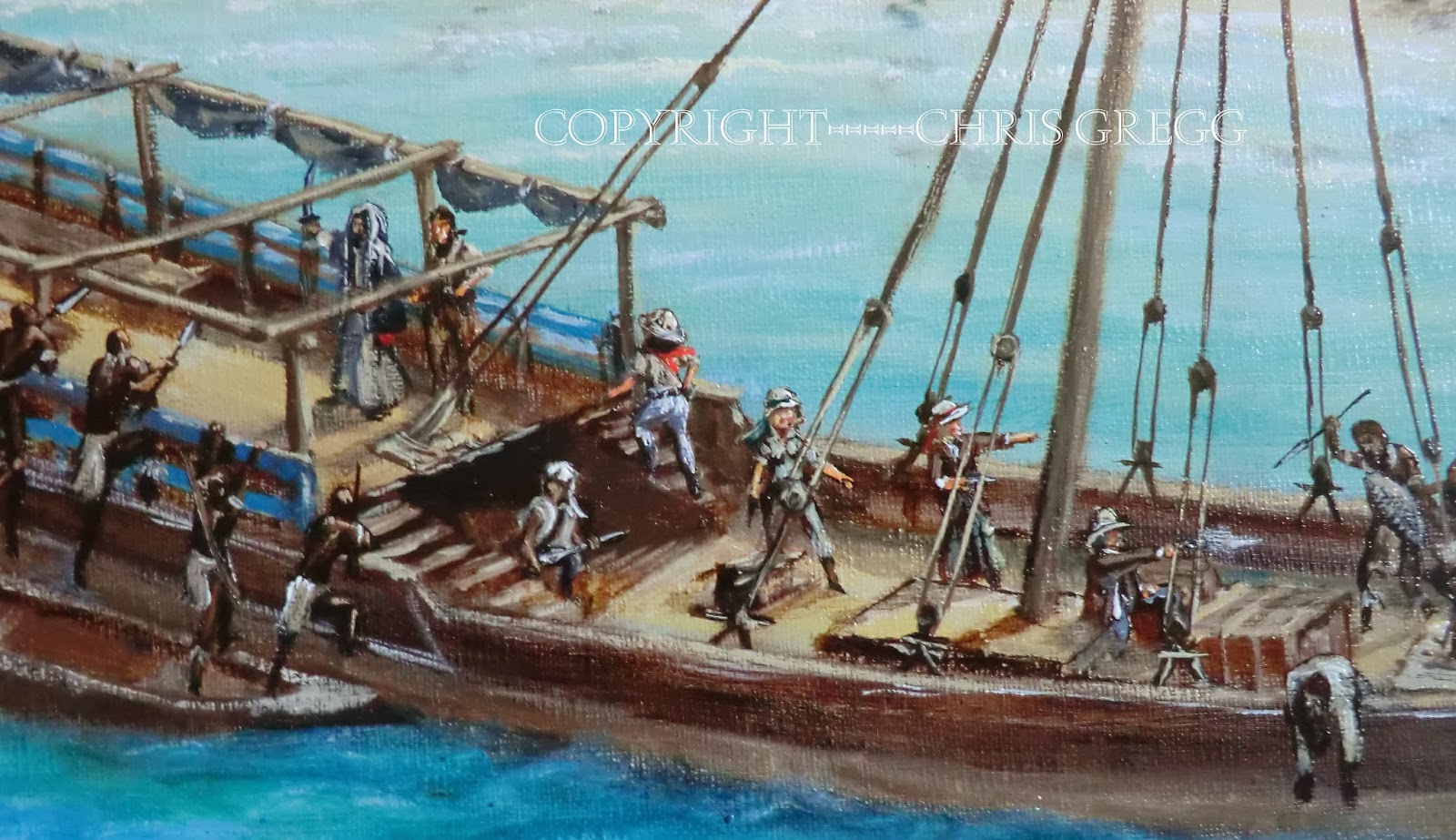 At top left Sallah stands ready with his sword and pistol and Doc Sauvage is at his side with his double pistol rig. Constance mounts the steps to assist them. Lucy Wagstaff stands guard over the Golden Head, still in its travelling box. Lady Penelope Wagstaff is about to fire in defence of her husband, the Professor, who has knelt behind some crates and just felled one attacking native.  These figures in actual size are just about the same as one of your 28-30mm model miniatures.

In the last posting I explained that I modeled all the prominent figures in both paintings. For this one it was Zanzibari type "Arabs" all rendered with a fairly cliched, rather than purely realistic, character. But I wanted to be sure they looked real  and the Duchess photographed me in all sorts of poses and costumes from different heights up our staircase in order to render the varied perspective across the boat deck as the "seagull" looks down and then across.
Here is the nearest point to the viewer showing the tatty paint-peeling stern. A nervous boatman is being lowered and hangs on with trepidation just before the rowing boat hits the water. My idea of the sailors on the ropes (as opposed to hired armed slavers) has given many of them a kind of standard costume including a white headcloth and black waistcoat. 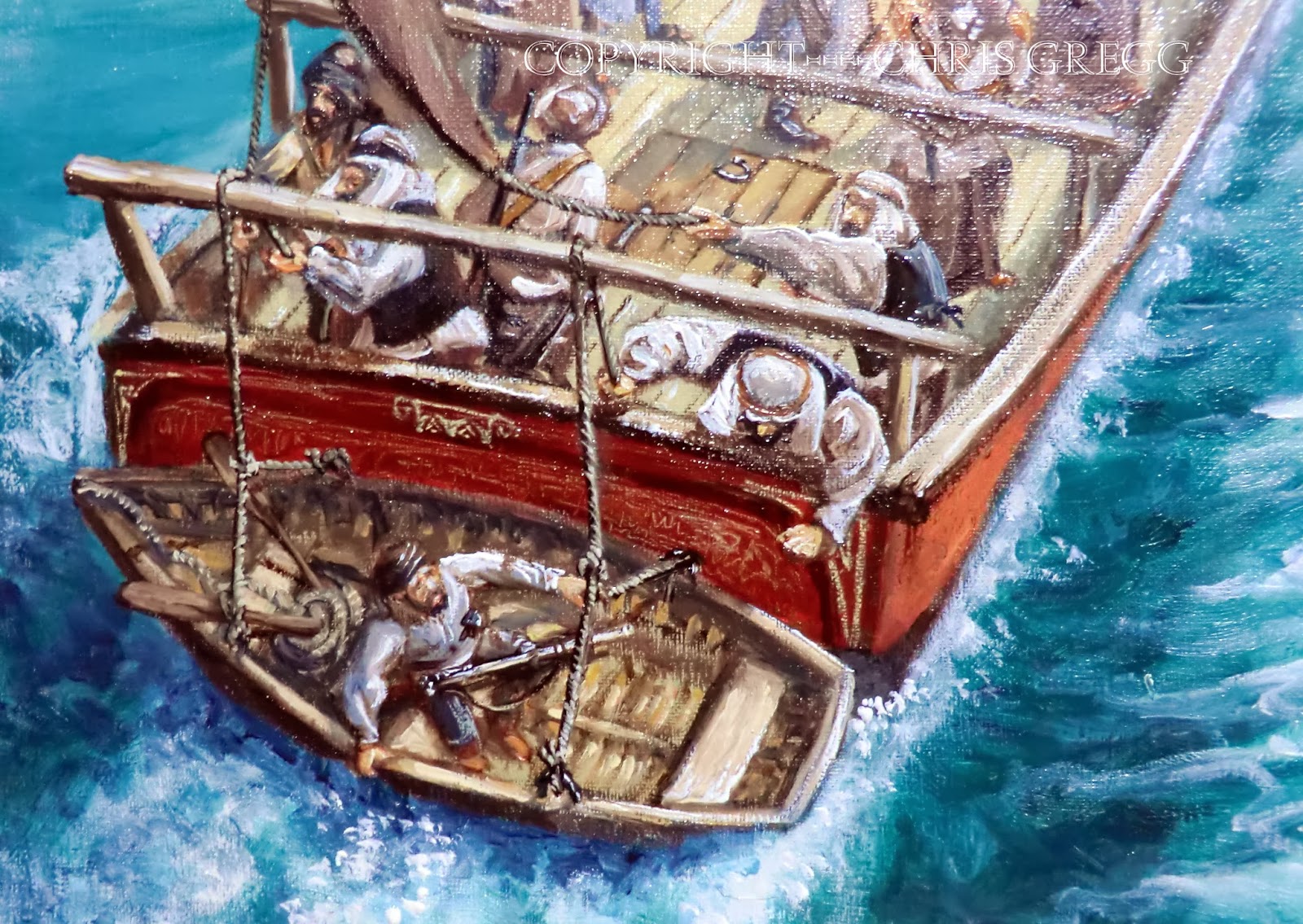 Further up the deck the slavers are already engaging the trader's dhow with rifle fire. Ian envisaged a force equipped with old fashioned weaponry and asked me to include a swivel gun. I was happy to oblige and recalled my photos from my visit to 18th Century Fort Ligonier in Pennsylvania. 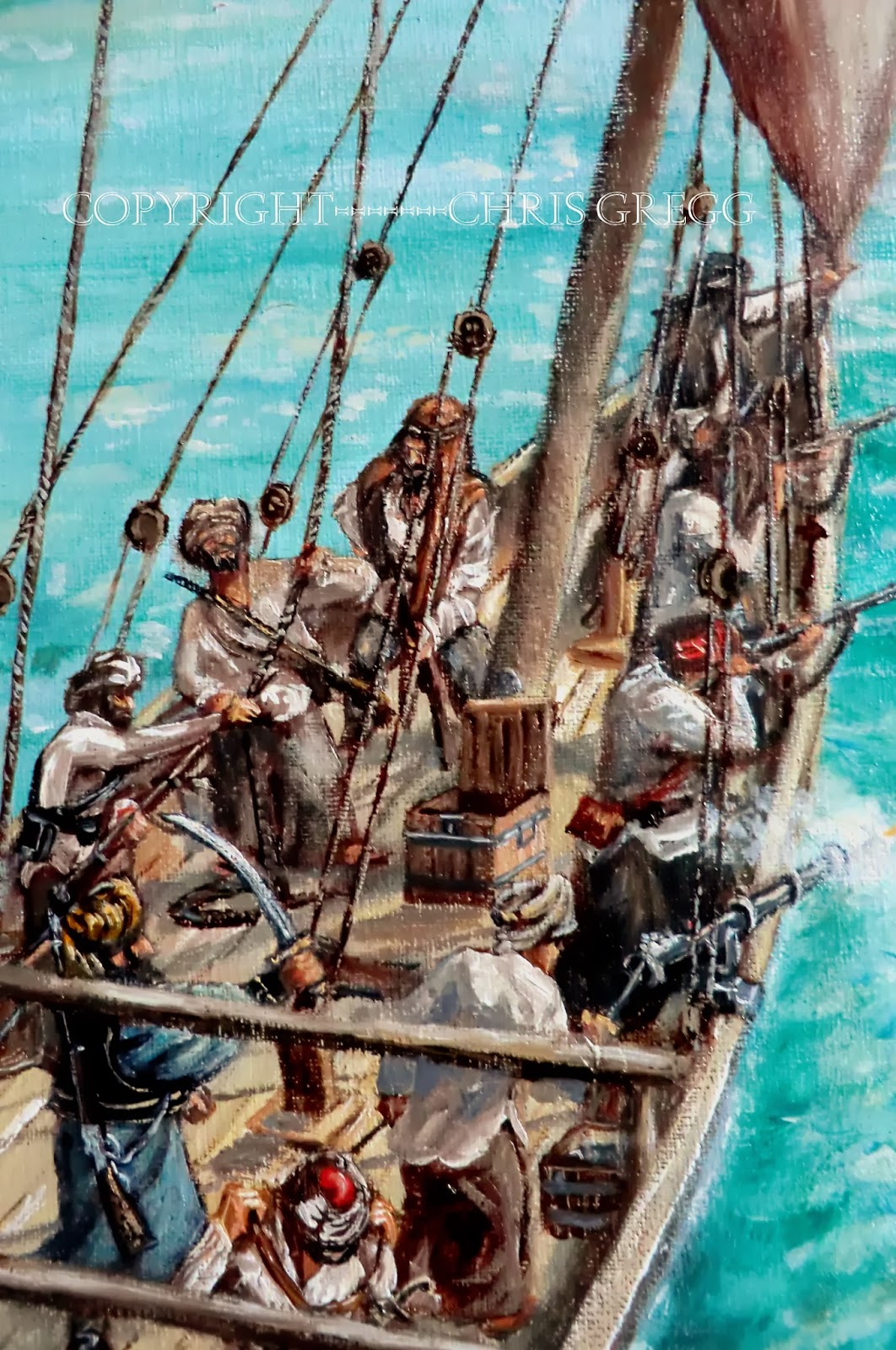 Bearing in mind these stories are set in 1920s Africa I was quietly sceptical of  how the White heroes frequently outgunned their native and Arab foes which had usually been limited in Ian's games to low powered 19th century guns. The Colonial wargamers among you might take some consolation from my "revelation" moment last month when on holiday in Morocco - the Marrakech Museum has this antiquated flintlock piece labelled "first half of 20th Century" ! 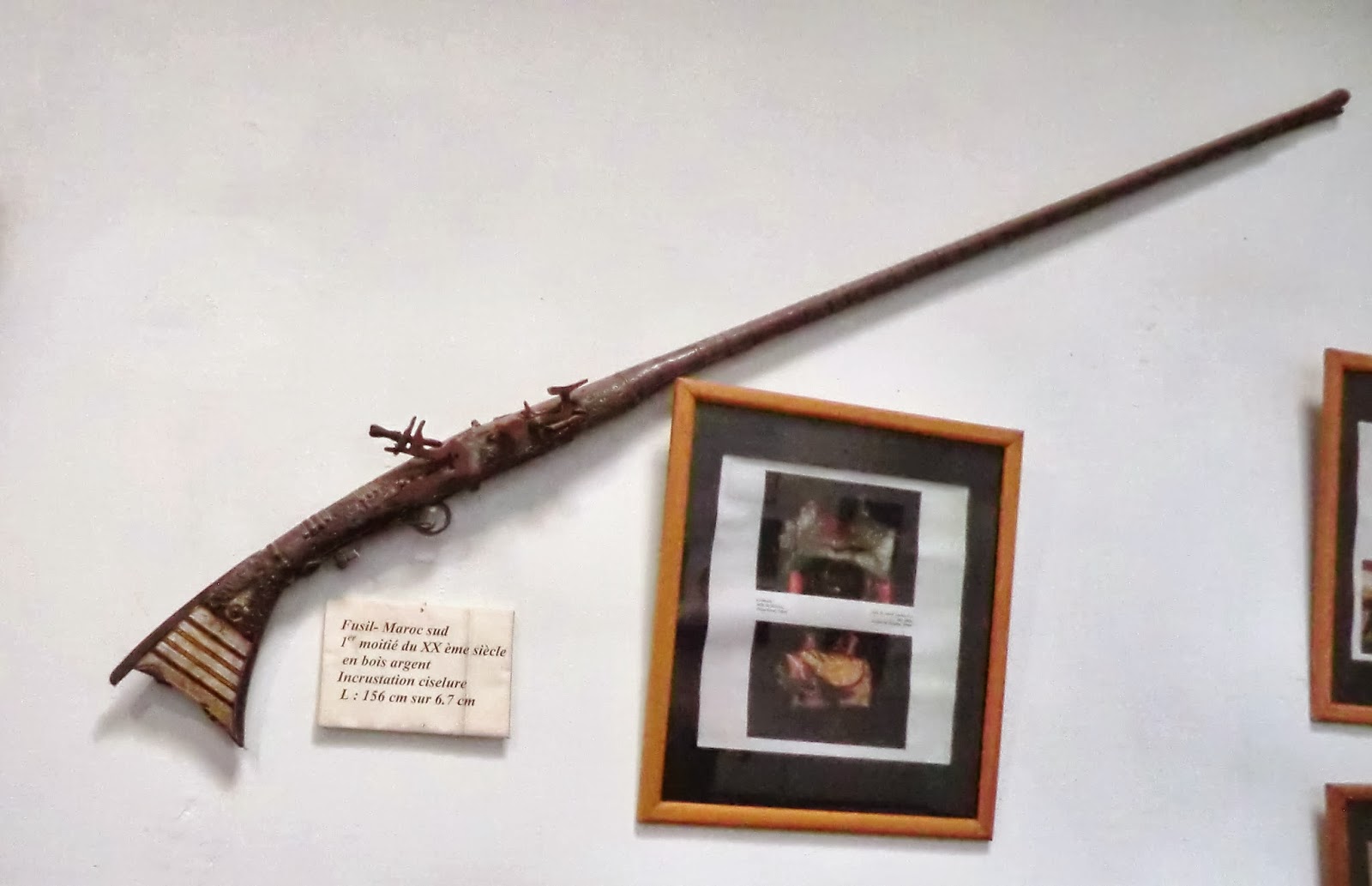 Just an example of the amusement I get from play acting the parts - the artist as model. 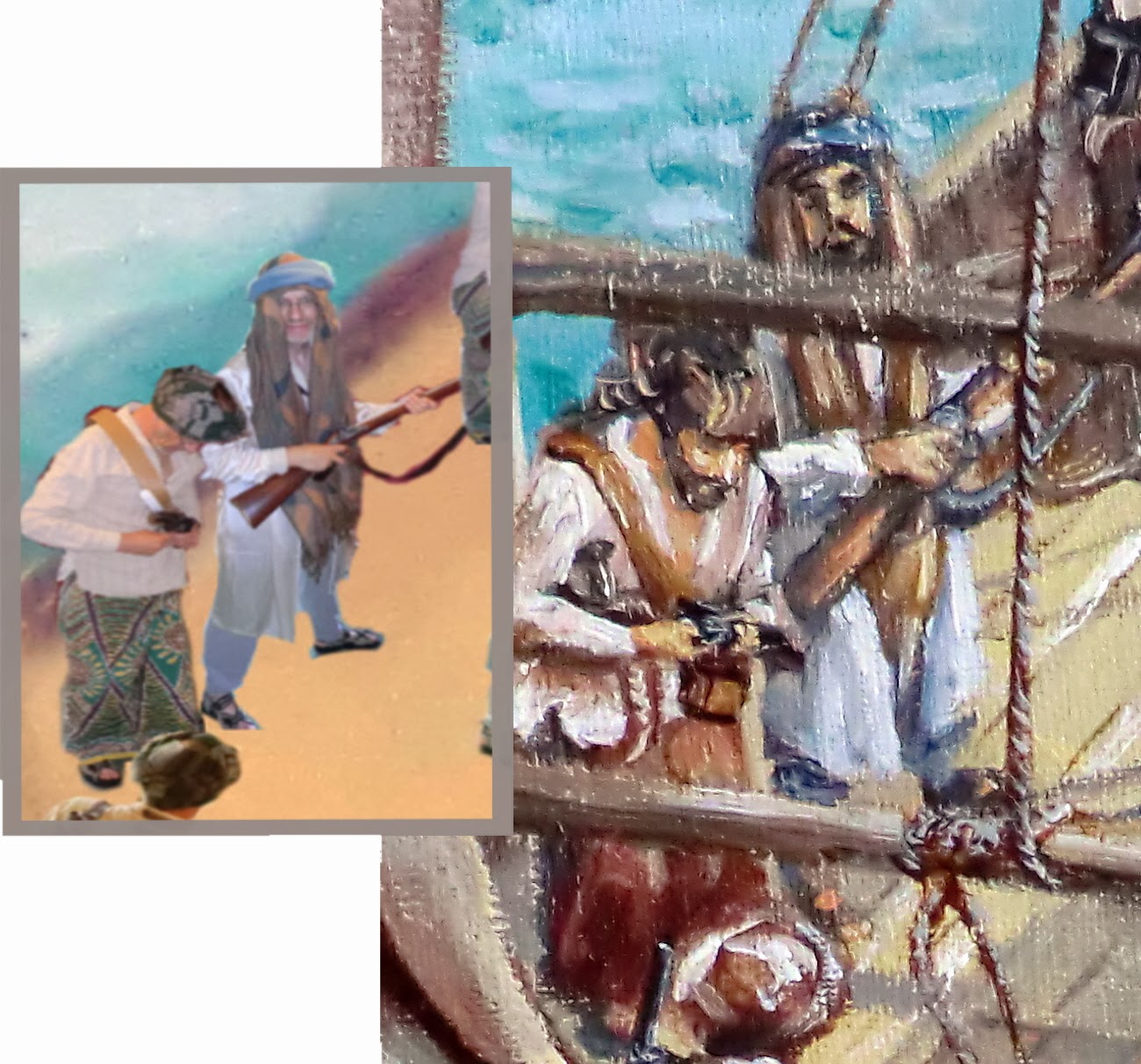 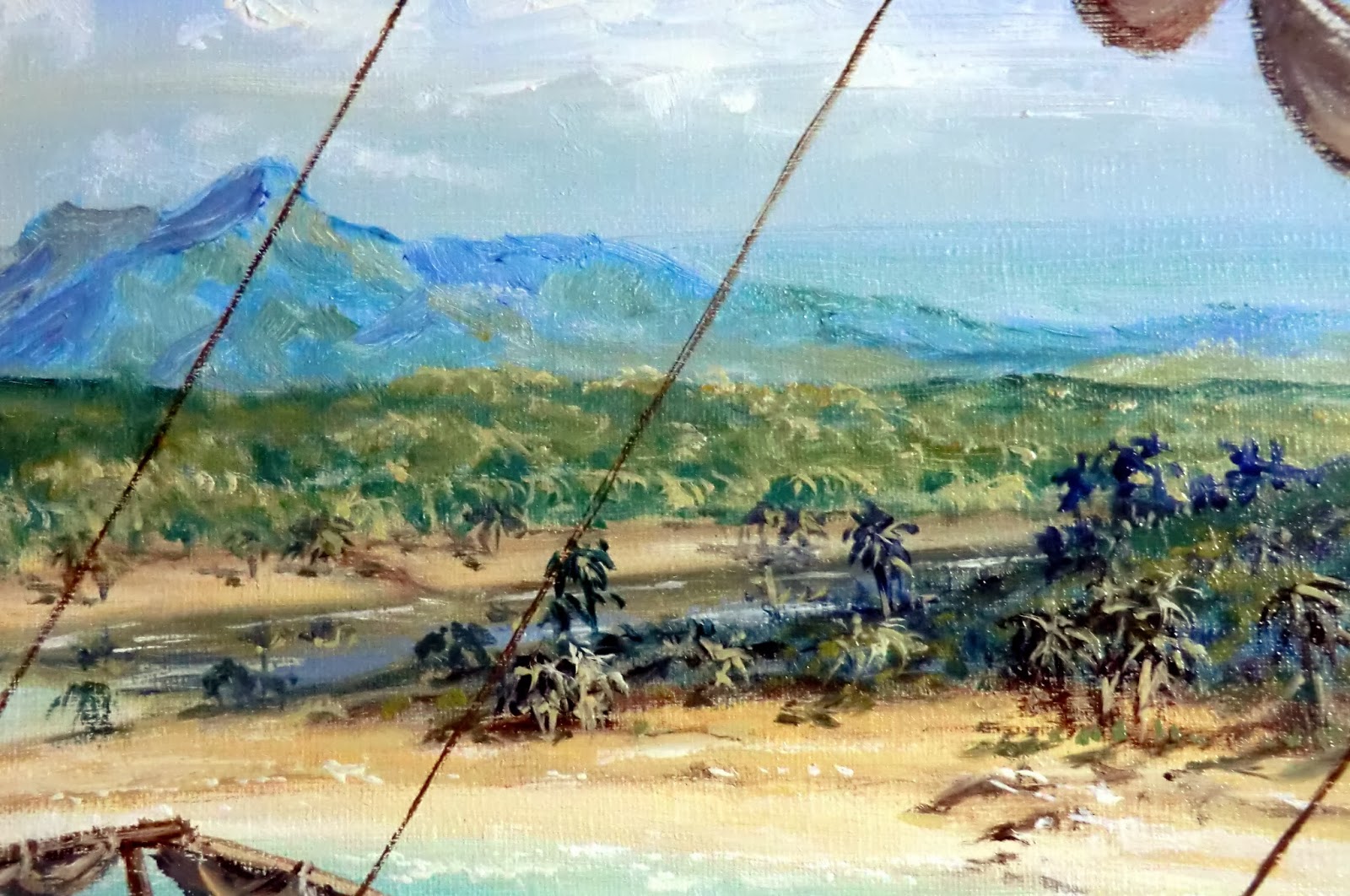 At the risk of being tiresome........for the wargamer who has almost everything.....why not commission an oil painting of one of your games rendered as featuring "real" people? Become insufferable by using it on the wall of your games room to recall a famous victory to your opponents, or show off a favourite regiment performing some great feat, or a panorama of some terrain you are specially fond of?  As you see, nothing is too much trouble, so just get in touch to discuss your ideas email me at Chris Gregg.

Now a related bit on pin-ups
Thank you for getting this far -  those not interested in the pin-up genre can navigate elsewhere now.

If you are not familiar with the "tale" featured here you might wonder at the worried look on the face of the poor man being lowered in the rowing boat. Well, as Sidi's dhow approached Sallah's it slowed down, the slavers delivered an effective volley and half those on the opposing deck went down wounded or dead. The slavers' lowered boat was filled with eager pirates who set off to take their prize, easily as they thought. At that point the unwounded Constance grabbed a tommy gun (anachronistic weapons abound in these tales) and sent the boatload of slavers to the bottom!  My rendition of this scene in CWJ got dubbed by editor Phil as a "CWJ pin-up". 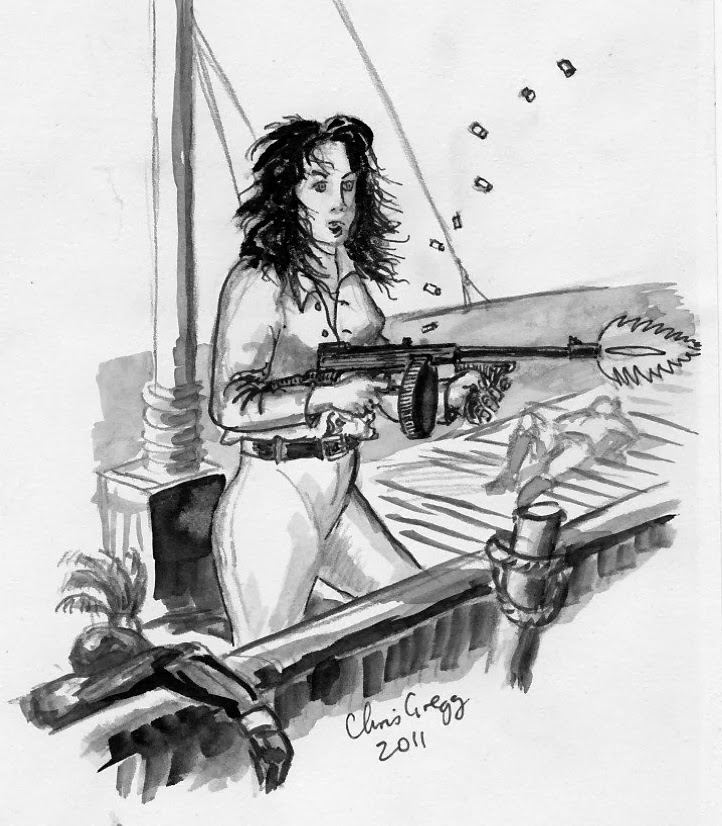 So with my imagination and Ian's put together that started me on the rocky road to doing pin-up paintings in all sorts of styles since. Constance was then featured in a Golden Head oil painting "Constance! What are you doing?" Here is a detail (pose modelled by the Duchess herself!) 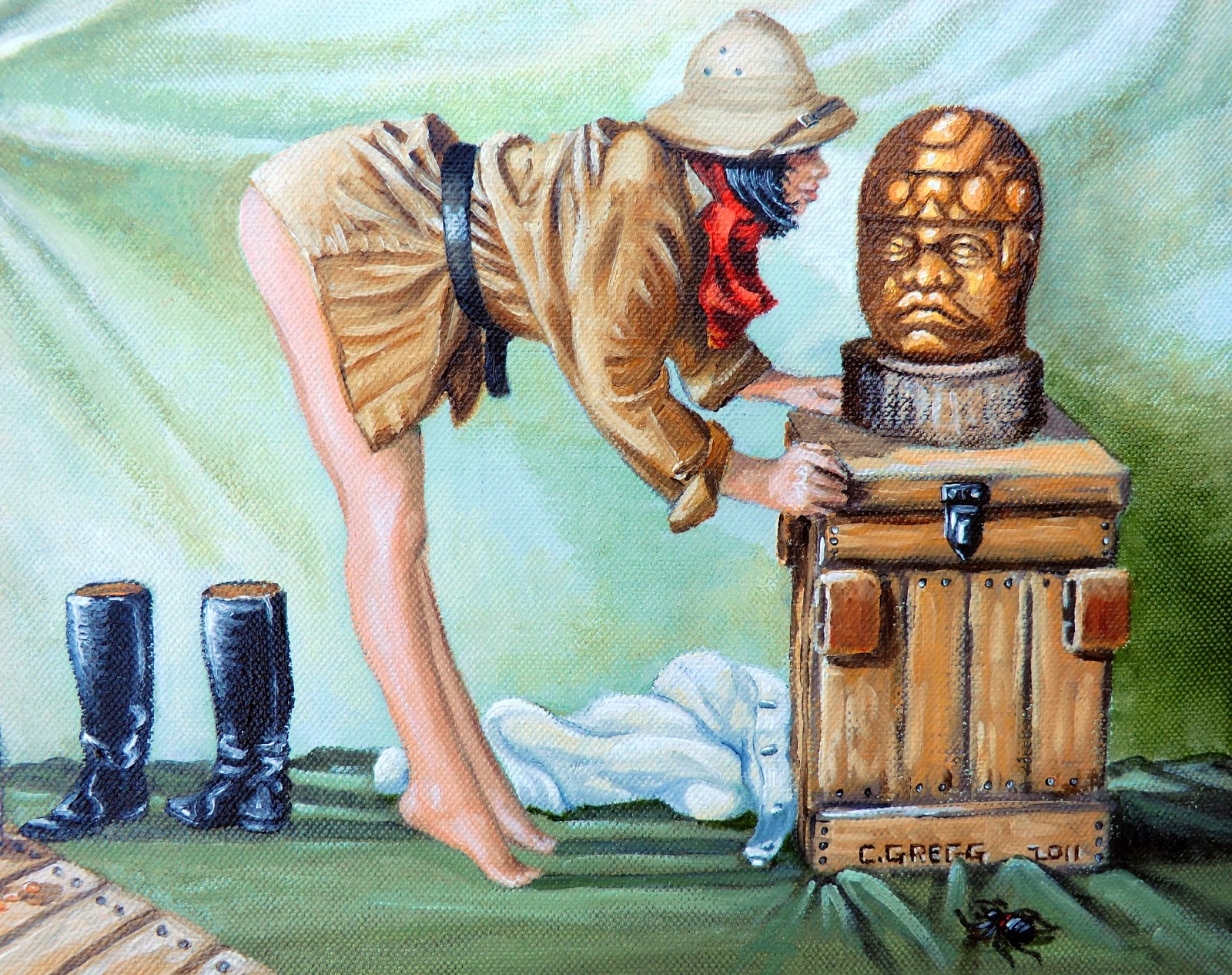 Constance's companion, Lucy, was originally featured  in the very first Golden Head illustration in CWJ Issue 2 and that later inspired another perspective as she rashly followed Lieutenant Daring RN onto a different slaver dhow in Episode VIII.  Kindly modelled by one of my Hussarettes,"M". This is its first public airing and it is part of a series of about a dozen more "Tales of the Golden Head" drawings commissioned by Ian and completed by me in 2012. 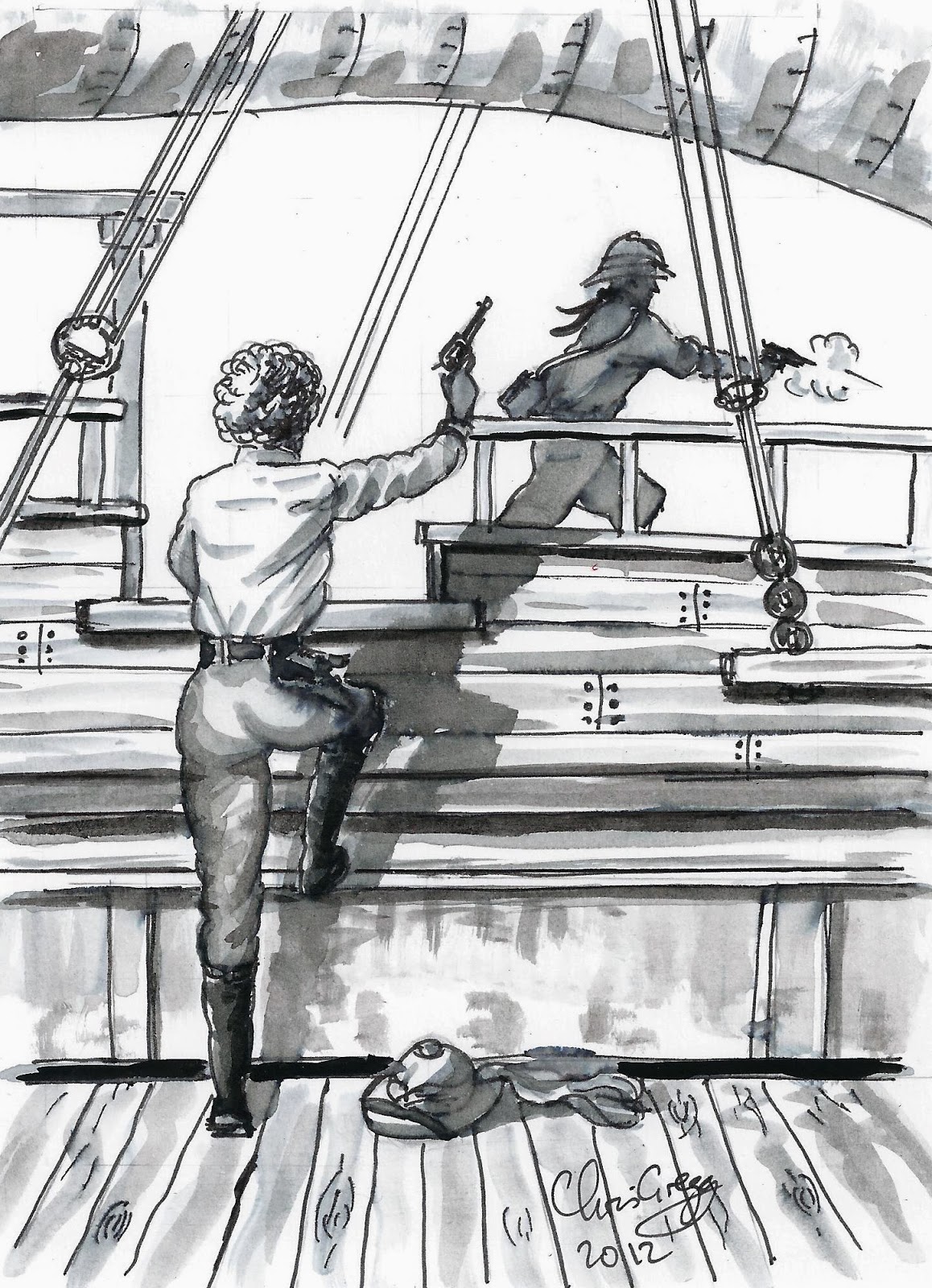