If this isn't enough to get the wargaming juices flowing for Waterloo 2015 I don't know what will!  As promised in the previous Waterloo posting  Kevin East has now finished his first custom-painted French battalion for our 1:3 scale Hougoumont and La Haye Sainte games. 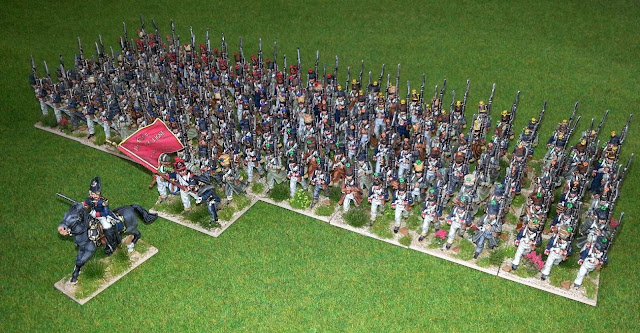 I'll hand over to Kev to tell you more:

"Hot off the painting blocks is my first French battalion- all 150 of them! I include some photos of them at various stages on the broom stick sections that enables me to access all round the figures for painting purposes. I usually use an electric glue gun to stick the metal figures on the broom stick sections and use blutak for plastic ones. The metal figures are easy to prize off using a chisel post varnishing. Then super glue to the plastic bases and watered down wood glued sand for the ground. After painting the sand I use flock for grass. I usually titivate the bases with grass tufts, flowers and rocks to complete a realistic effect. I worked out it takes just under two hours of painting per figure. Hope you like the effect en masse. 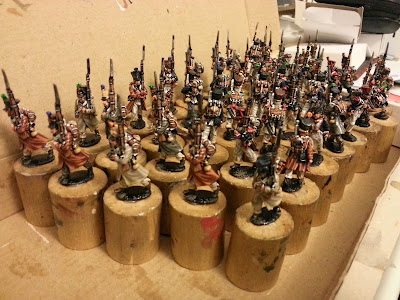 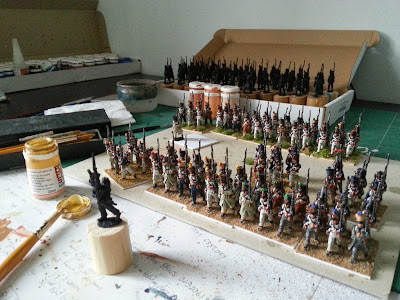 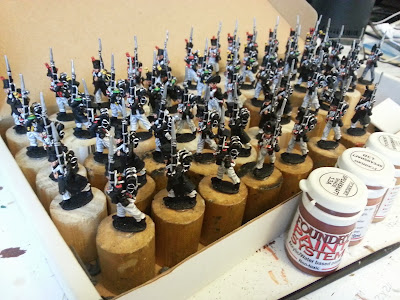 The French battalion is all Perry metal figures. ....so it proved expensive! But the good thing about the range is Perry offer the same posed figure with or without greatcoat. This added to the fact that there are 6 slightly different poses to each pack so that means there are a total of 12 different fusilier and 12 different light/grenadier company figures that can be used to make up the battalion. This makes for a more 'random looking' set of figures when put together so adds to the realistic atmosphere. Of course one could always mix in a box or two of the plastic figures that perry do in French infantry march attack pose and then there is an infinite array of possibilities to make the look totally realistic. Perry really have thought of everything! 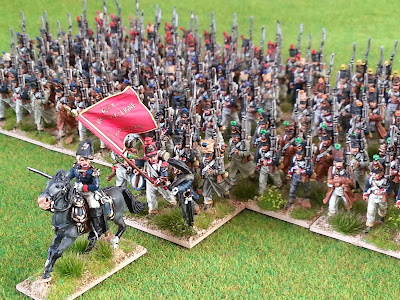 The flag is a third battalion fanion from Graeme Black of GMB designs. Here is the website French armies
They are great as they provide 2nd(white) 3rd (red), 4th (blue), 5th (green) and 6th (yellow) battalion fanions for line and also have them for the light battalions for the period where all you have to do is paint the regimental number in gold and the job is done! Perry also provide battalion as well as the regimental command packs which makes life easy for the figures.

I am now on the 180 strong French light infantry battalion I am producing. That should take 3 months! ( although I already have 60 figures from my existing collection)."

Kevin sent me loads of photos so why should I deny you, gentle reader, the chance to enjoy them? The close-ups show his amazing artistic technique, these look more as if they've come out of an oil painting than being bits of sculpted metal covered with pigment 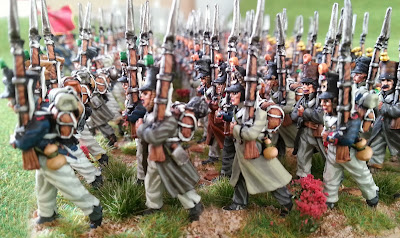 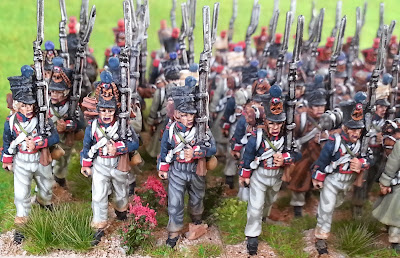 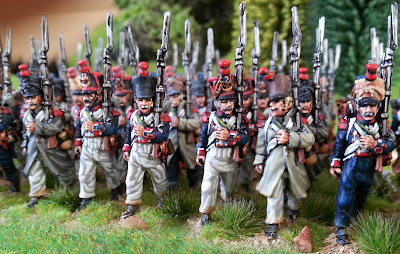 Here are two other views of the whole battalion. Each company is 24 figures strong and you can tell them by the different coloured shako pompoms and the Grenadier and Voltigeur companies are at the back in this attack column formation, representing approximately 450 men. 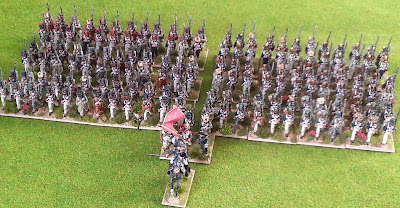 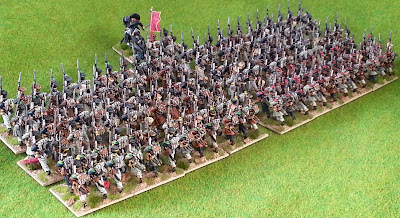 Some close-ups of Grenadiers and Voltigeurs to finish off

We hope to field about 6 to 8 French battalions like this at any one time in our various Waterloo scenarios.

I'm currently working on a 50-strong Nassau Light Company so hope to show you them in a couple of weeks.