It seems like an age ago, when the sun was warm and I was sweating mowing the lawn (apologies to North American readers with your current minuses off the scale!) but I posted a little piece about my newly acquired sun helmet. That was because it was to be a costume prop to help me with two paintings I mentioned that day.

I'm long overdue telling the internet community about them as young Ian took delivery of them in  late November and was very appreciative. They are now on my regular  military art website which I've just had updated (and for those who like such things click through from that to the main page for various exotic ladies). I'm only able to put small resolution images on there due to bandwidth but now here is the background, and better quality images.

Those of you who subscribed to Classic Wargamer's Journal will remember Ian Allen's games based on his Indiana Jones style "Tales of the Golden Head" set in the fictitious East African country of Umpopoland. During the story, in Episode VII, the hero party led by Professor Wagstaff was escorting the Golden Head on a train using the saloon coach provided by the Imperial Governor and with an escort of "Imperial Troops" in the guard's van. I was lucky enough to be asked to illustrate the "Tales" that were published as wargames in 2011 and this was my ink drawing of that incident. 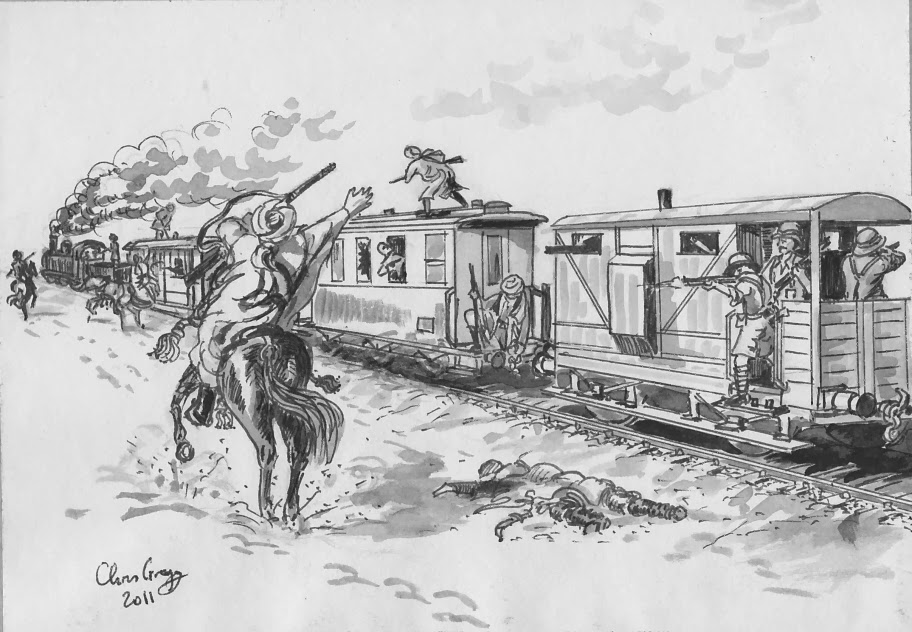 Around 18 months later Ian decided he'd like two large oil paintings of Golden Head battle scenes and this episode was one of them.  My brief was to enlarge the scope of the original to include a feeling of place, based on how he described his game table set up, and to show more of the "bandits" which I'd imagined as mounted Zanzibari Arab types, plus telegraph poles along the railway line. So this was how I altered the original drawing in the computer to fit a 30 inch by 24 inch canvas and added more figures. It's only subtle but I've made a bit more space between the uncoupled  guard's van and the train in order to spill some of the soldiers out and make a much more interesting composition.
This is the sketch I based the painting on 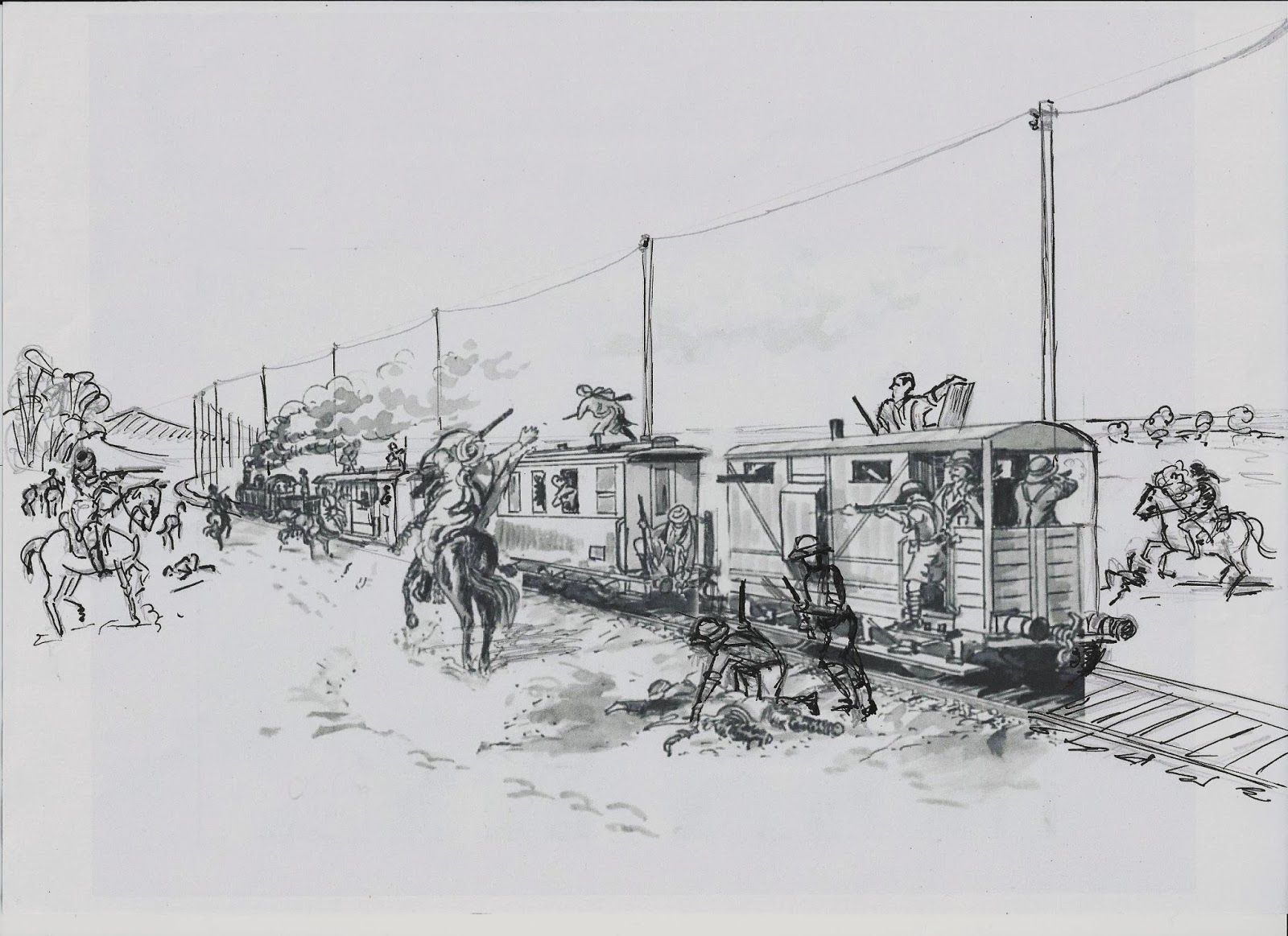 And here is the final result in oil after about 40 or so hours work. 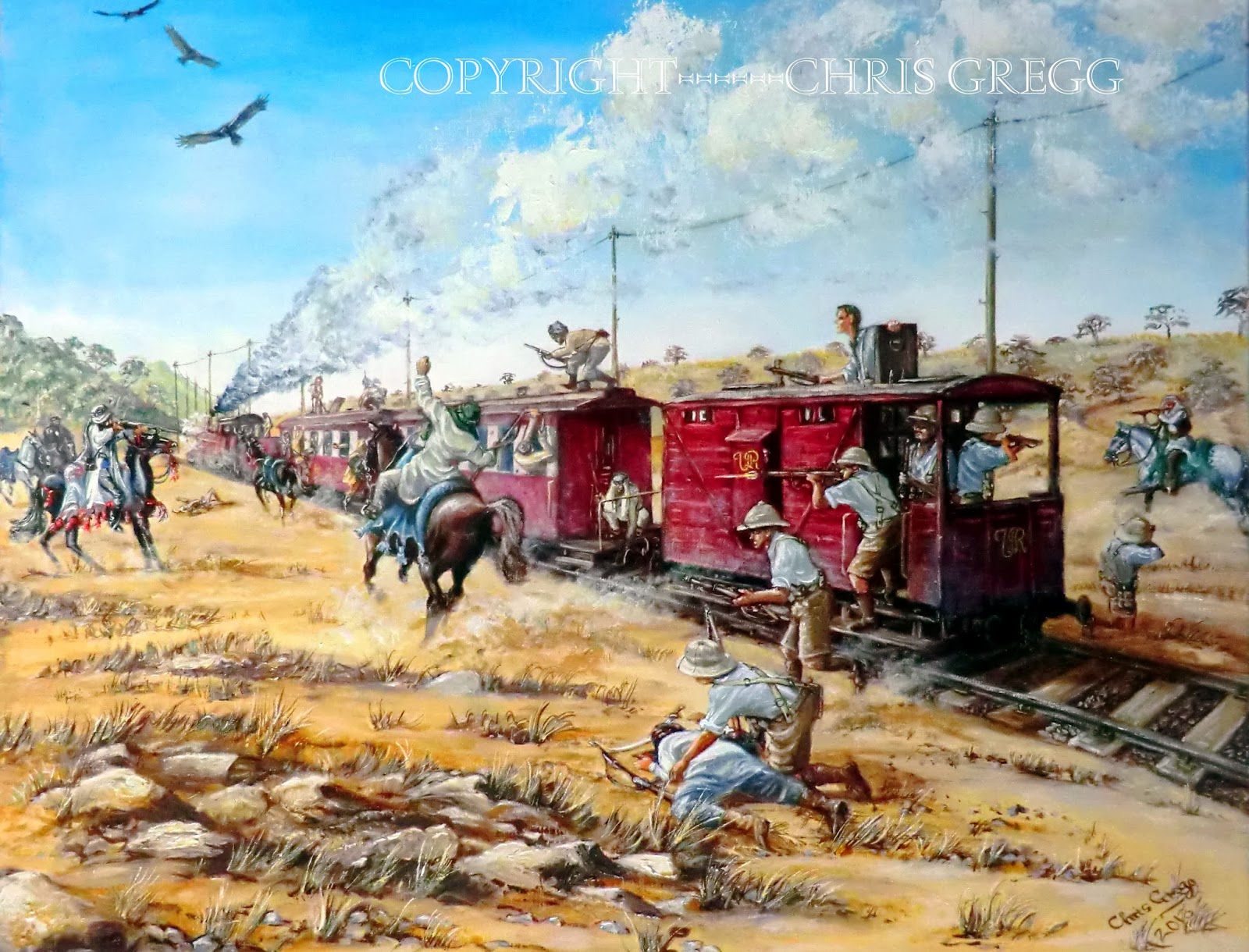 Here is a detail focusing on the Arab raiders in the left hand half. 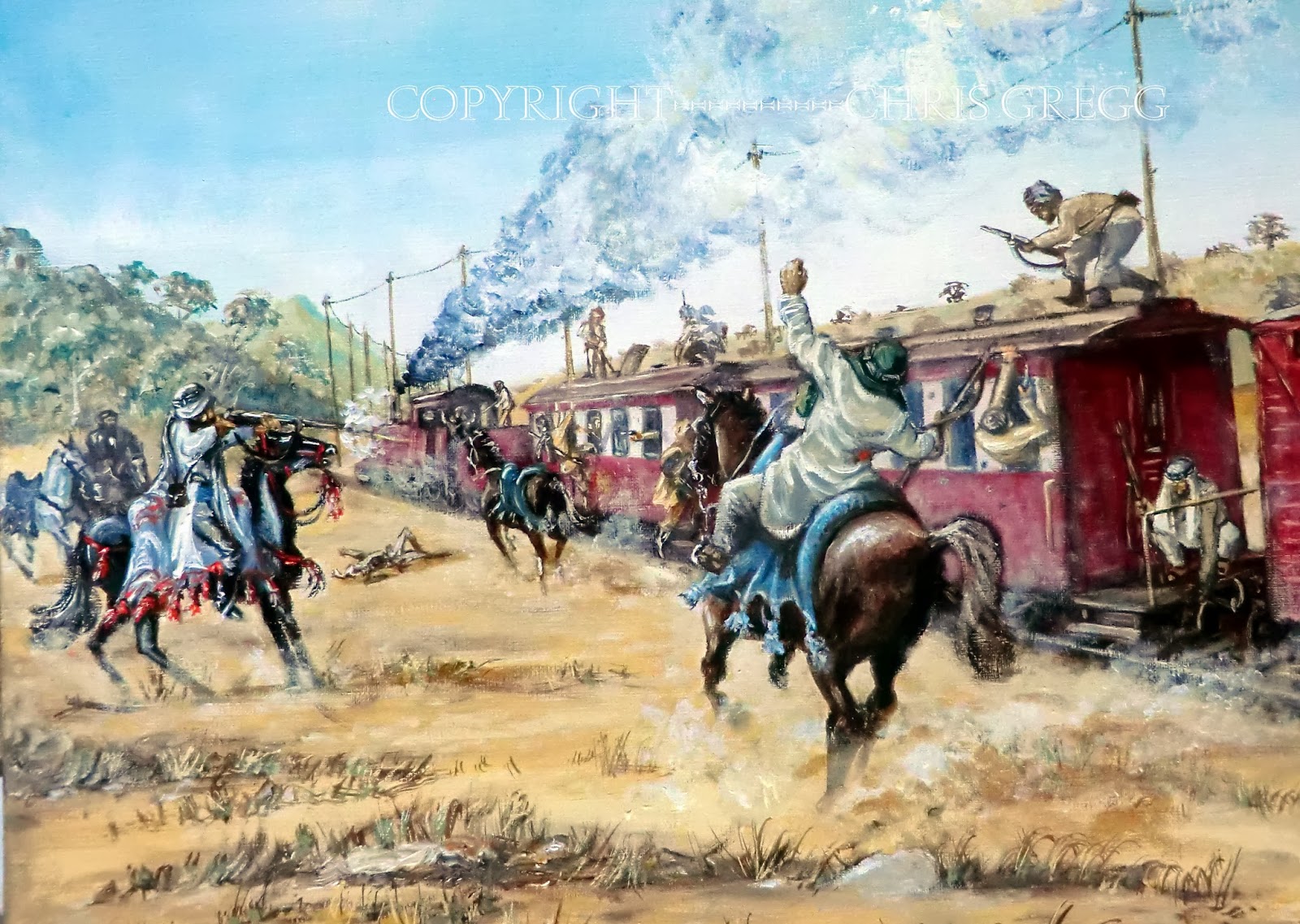 The drivers are being held at gunpoint in the engine and the heroes are fighting back from the first carriage. In the nearest carriage an armed passenger attempts to take a pot shot at the bandit on the roof, and at the back the guard's van has just been uncoupled and slows down.

This one is a detail of that part. 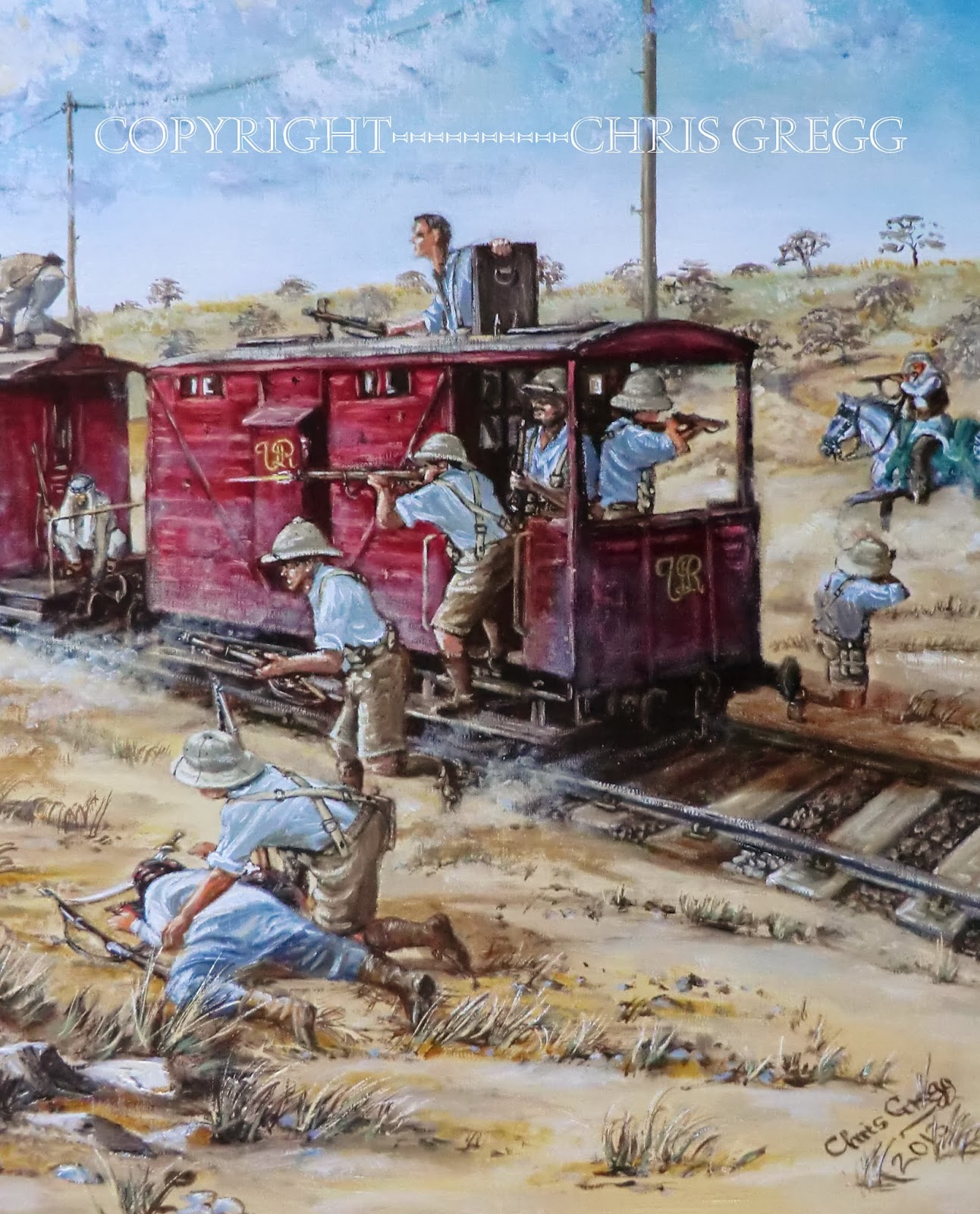 The sharp eyed might notice a monogram on the van I designed specially at Ian's request. No it's not VR , but UR for Umpopoland Railways.
I mentioned that I had dressed up and posed for many reference photos for the two paintings, with the Duchess of Porchester kindly acting as photographer. Just for fun here is the final cut of me in some of the roles (including the body). Once I had sorted out size and perspective on the canvas I underpainted the carrages and scenery, photographed it and then cut and pasted and resized each figure in the computer according to position. I could then print out sections as required to draw them in and paint on the canvas. As you can imagine it's quite an involved process with so many figures. 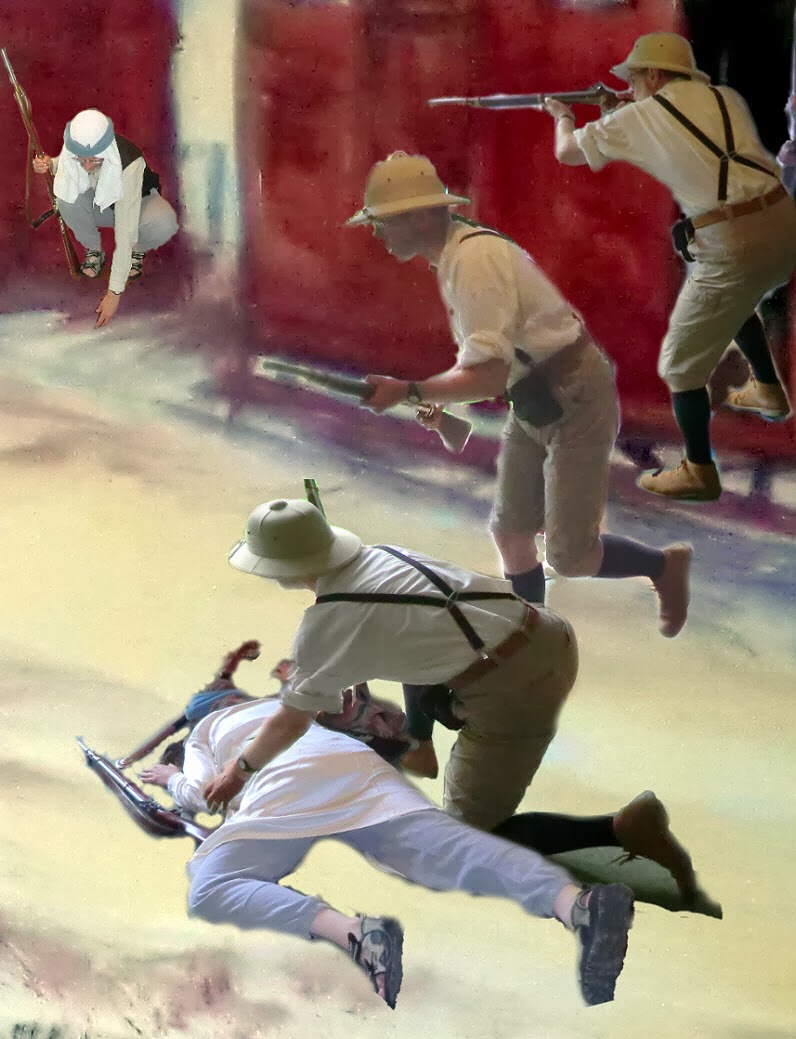 My Napoleonic carbine was a reasonable substitute for what became Lee-Enfields and a Martini-Henry rifle in the painting. Borrowing some of the Duchess' clothing was necessary for Arab robes and we had a lot of laughs!  There will be more of this in the next posting which will feature "The Slaver Dhow Attacks".

Comments welcome, but remember it's fiction!