Now here's what I call a pretty cool uniform (and it's not light blue!!). Whoever invented this smart rig of green with black facings and lots of yellow lace supported by buff equipment straps, ought to have won the Stella McCartney prize for fashion design, or whatever its Napoleonic equivalent was.

I'm not being too fussy as I get a bit confused with the battalions of Nassau troops at Waterloo. They fought, at least, at Hougoumont, La Haye Sainte (LHS), behind the central ridge, and on the Allied left flank. Their uniform was still in their old French style even though now opposed to the Emperor. I only need one large light company for the LHS scenarios I'm organising, but Kevin needs the best part of a battalion for Hougoumont - the 1st battalion of the 2nd Nassau Regiment, I believe.  Mine is 54 figures, representing about 162 men - Nassau battalions were very strong at Waterloo, around 950 men in 6 companies. The "Waterloo Companion" gives 800 at Hougoumont and Kevin's spreadsheet shows he has opted for approximately 650 to allow for some losses - about 215 figures. Apart from my 50 we will be making them up from the contributions of 3 other wargamers, so maybe we won't see the full battalion till the day in Summer 2015. I will just be concentrating on my Voltigeur Company for this post.

Being generally a wargaming cheapskate I've opted for a lot of plastic in this project and I've got about 4 boxes of Victrix French infantry to dip into. So I raided them all to get the bits I needed to assemble 54 Voltigeurs. For those not familiar with these, here is a look at them in the raw state. 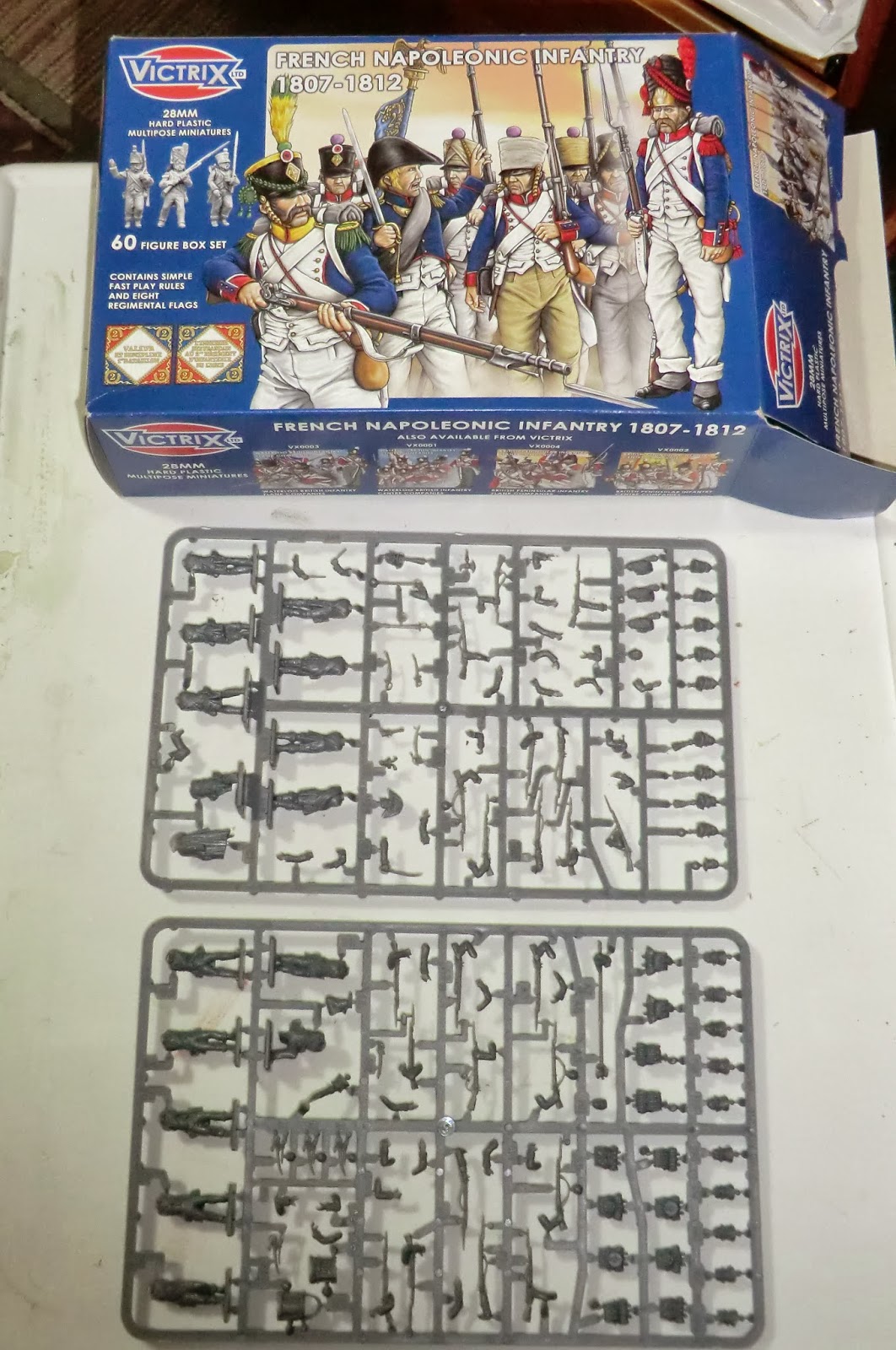 The big down-side is there are lots of fiddly pieces to identify, snip off the sprue, trim then glue. It took me about a week of spare time to make up this company, I used bits from various boxes, some moulded in different shades of grey (only two, not 50!) 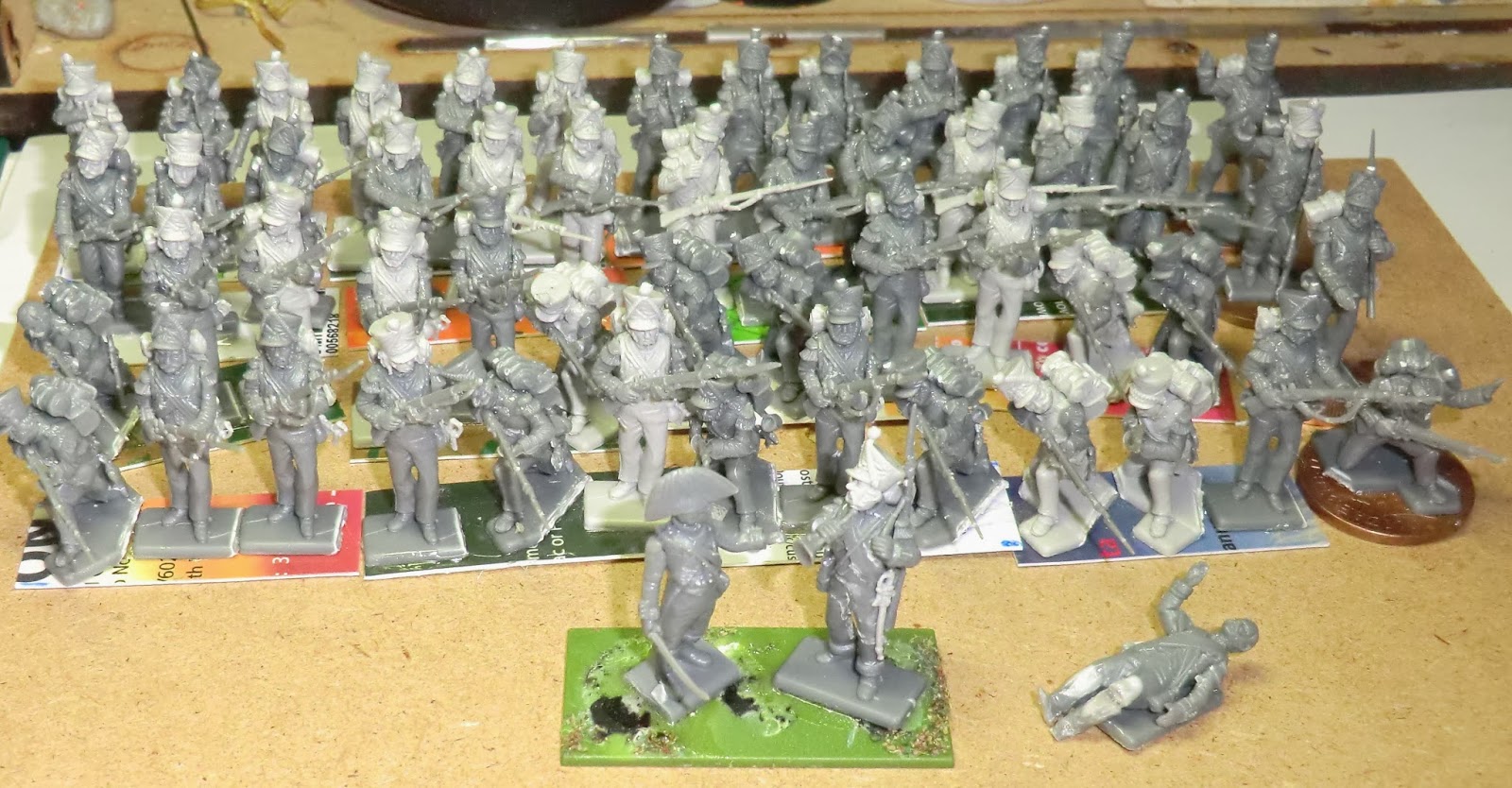 Unless I had quite a few more boxes it would be very difficult to get the entire unit in the same position, but that didn't matter as, for a light company, I expect them to spend a lot of the game in open order, manning defences, or doing other non-linear escapades. More on the posing detail later but for now its 48 privates on 3- figure bases, 4 x NCOs  individually, and a command stand of the bugler and officer. Oh, and a casualty figure in case he's needed! By the way, sometimes I cut up old plastic credit cards and membership cards to make bases when I can't be bothered to shell out for commercial plastic or MDF ones; unfortunately, occasionally some of them warp a bit when the texturing is applied, so be warned - spend the money and be safe!
I find a very good product for the base coat is Army Painter spray paint.  Not only is it a good quality finish and doesn't clog up the nozzle, but it's well named "army" painter. I have used one can of "Army Green" so far on this project for about 40 x 95th Rifles, 134 x 2nd KGL light, 54 Nassau Light, and just added about 120 towards the Luneburg battalion, and it's still not finished after approx 350 28mm figures.  Once dry, for this unit I gave them all a quick thinned coat, with a big brush, of Citadel Snot Green followed by Caliban Green. That gives a variation in tone for shading. Then, to boost my morale, their distinctive green and yellow Voltigeur epaulettes, plus the faces and hands, so they looked human. 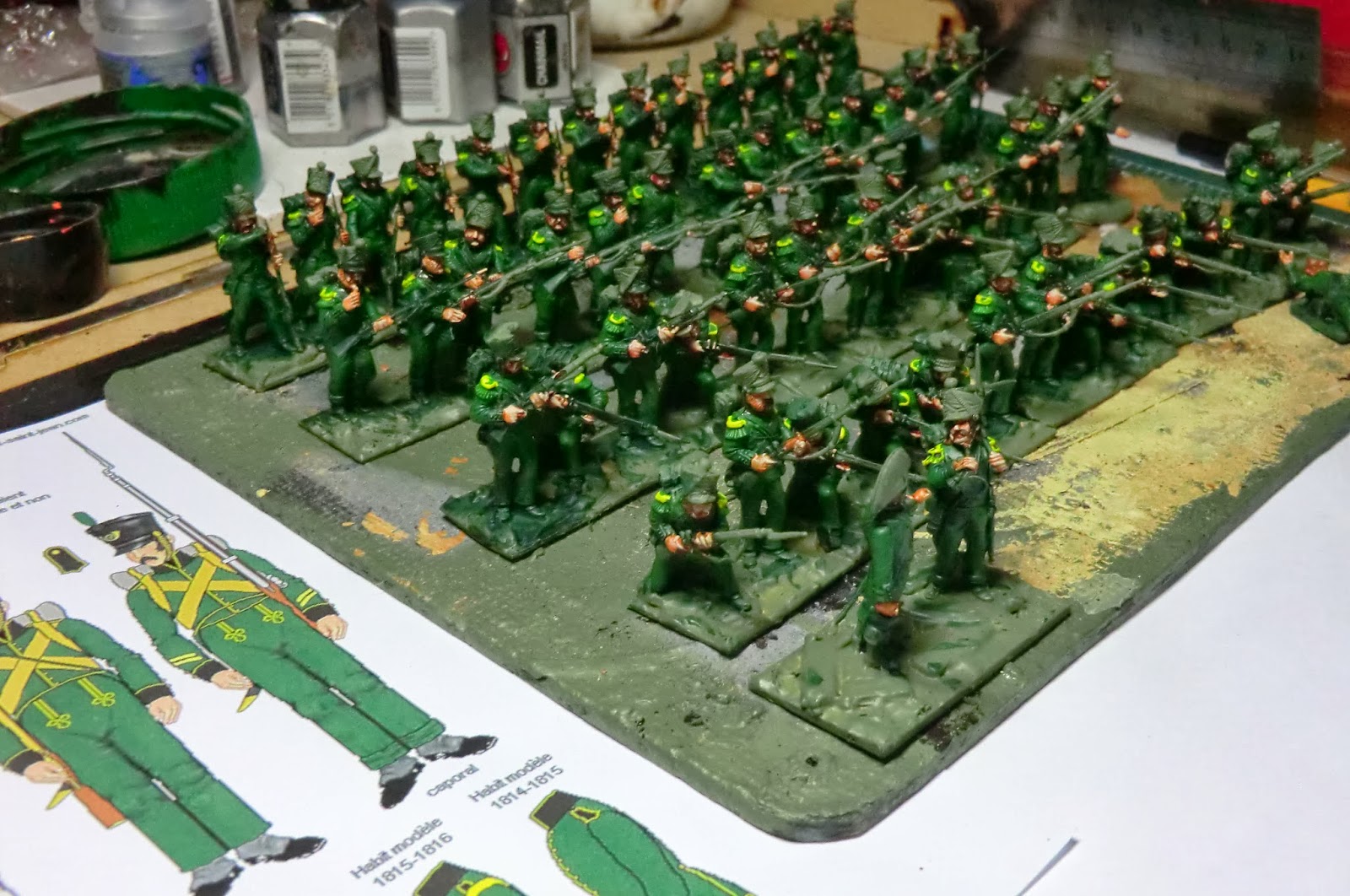 Here you can see that I had applied a coat of acrylic structure gel over the figure bases and the card bases to help blend them in. The green colour is just the "Army Green" spray base coat, not any attempt at grass. 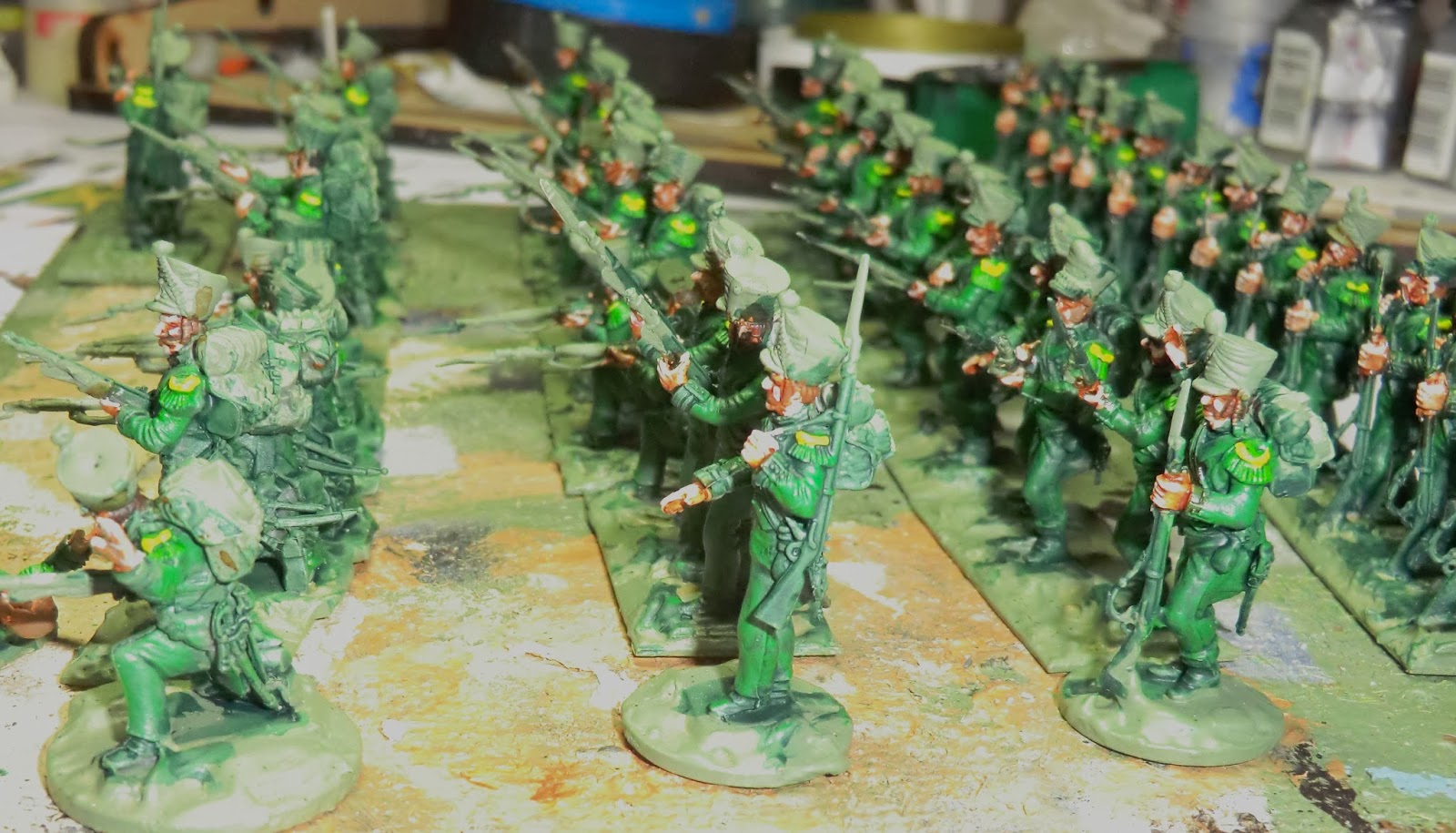 I won't bore you with all the painting procedure but now show the finished result before applying the Army Painter "marmite" - Quickshade.

The bugler close-up is an example of what I had to do for all the figures except the officer - paint on the Hungarian knot-like decoration on the breeches freehand.  My hand isn't steady enough to describe the circles in yellow so I first painted a yellow cross with slightly rounded edges. 106 yellow crosses later and I went back using a very fine brush and dotted green spots in each trefoil and a separator line going up to the waist. It wasn't as difficult as it sounds and I think the result is worth it as that's one of the distinctive features of this uniform.
Now to texture the bases with sawdust and sand mixture followed by Javis static grass, a good spray with matt varnish and they were ready for me to experiment with in formations! The initial assembly was done just before Christmas and I set myself to finish them by "the end of January" - that happened on January 31st. 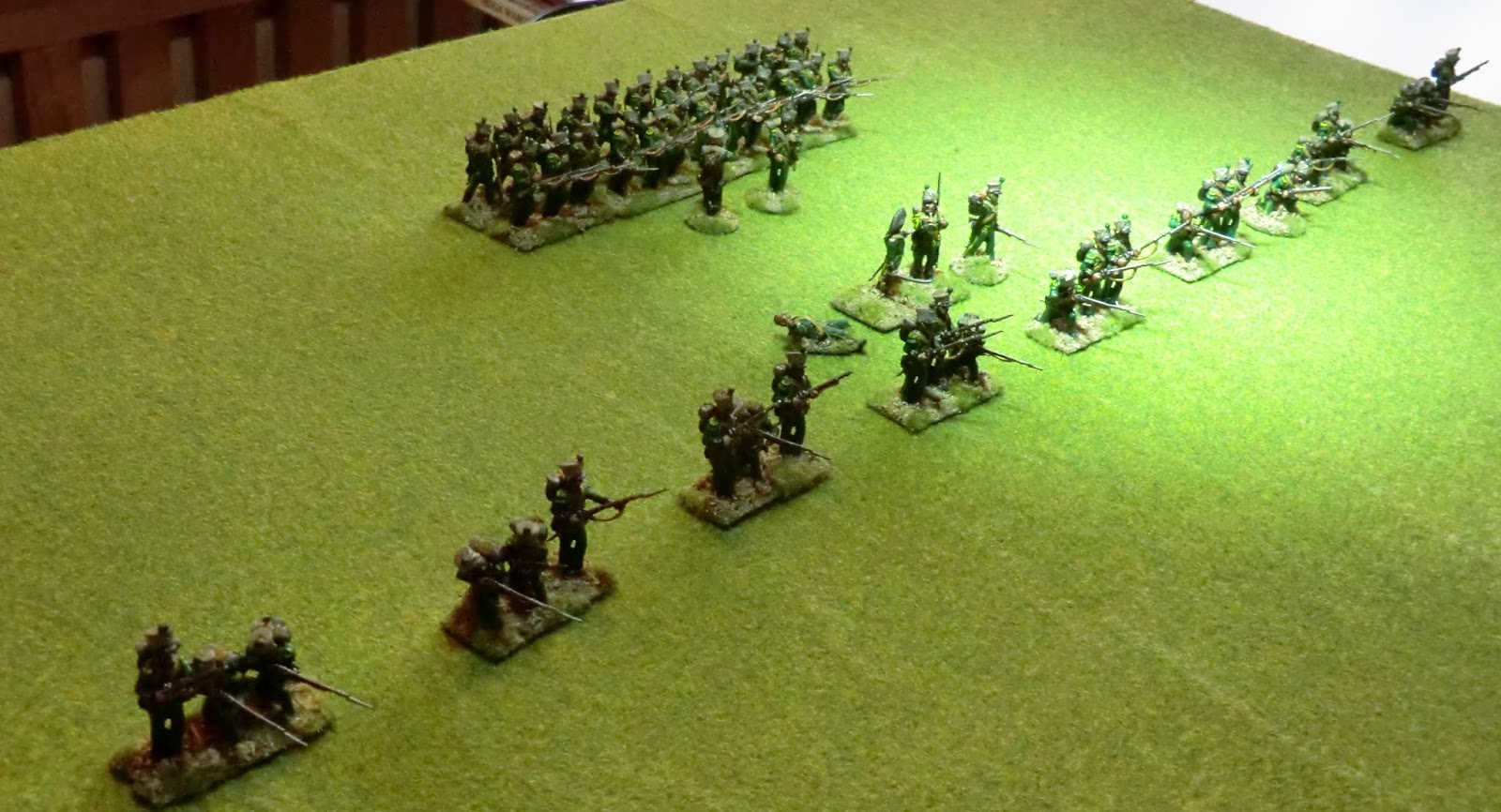 To finish off my experiment I wanted to see how much space they occupy in  two, three and  four-rank line formations. The two rank line is approximately 50 metres at our 1:3 ground scale, so for shoulder to shoulder close order for 150 men that feels exactly right to me. 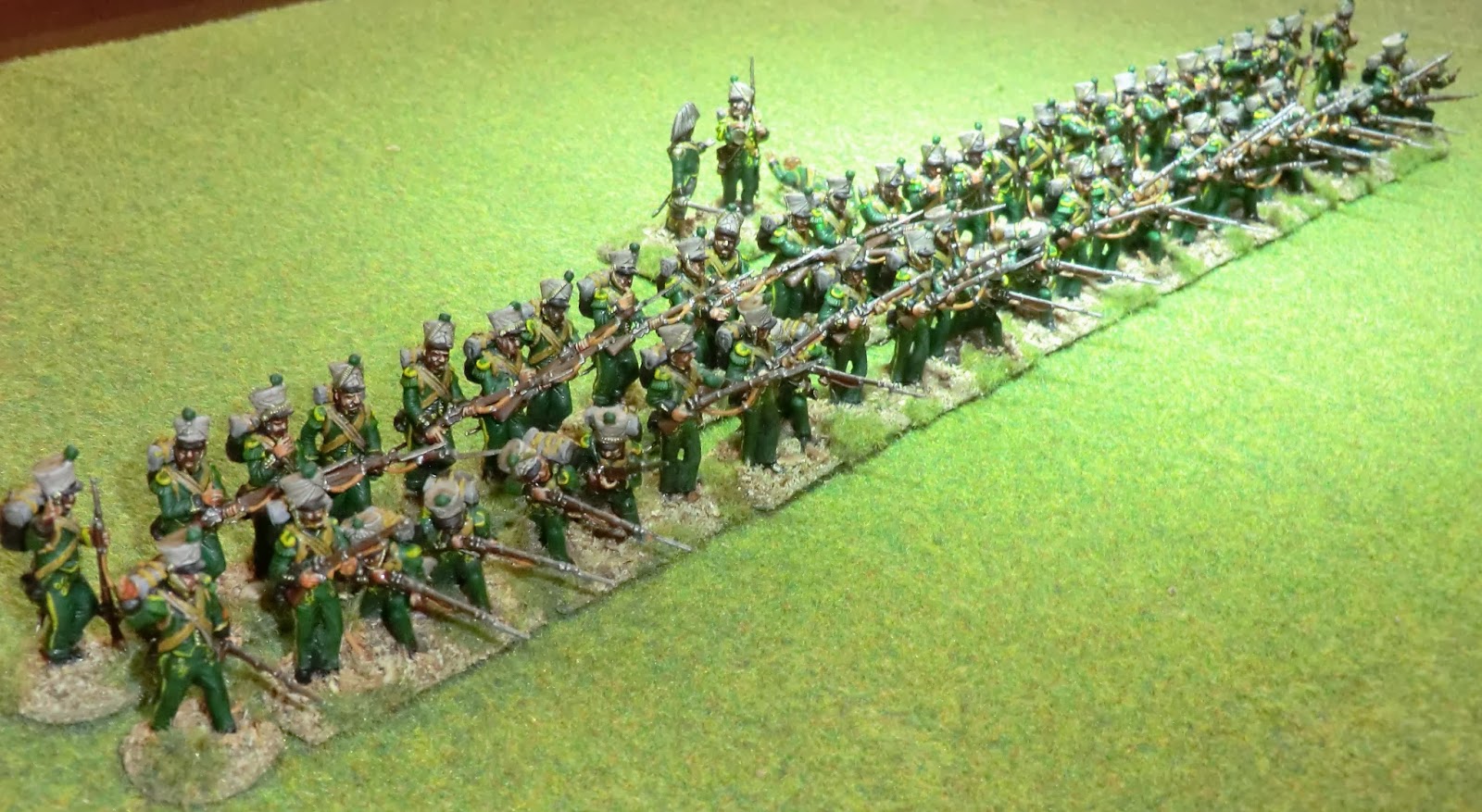 To conclude I'd just like to say that the only other time I've used Victrix was their Austrian Grenadiers box
grenadiers anyone? and they proved simpler to assemble. I think these French must be an early design and if you are the type who likes minimal preparation before painting they are not for you, but if you are a diorama builder then the possibilities for variety of poses is very good indeed.