In my earlier posting giving a report on our battle at Futonville
http://notjustoldschool.blogspot.com/2011/11/battle-of-futonville-report.html
the five newest units in my armies got their first outing. Earlier postings, in October, had featured the cavalry units close up. The Hussars of Bercheny and the Chasseurs de Fischer did well in their first game even though Fischer's squadron got destroyed and Bercheny's left the field at a quarter strength. The Royal Dragoons, however, were part of the ill-fated French heavy brigade and came on the field straight into melee with the Imperial cuirassiers. Both brigades only took one turn to sort each other to mutual annihilation, with the Imperial force marginally more successful due to slightly superior numbers, so I never got a chance to take any in-game photos of my new Minden dragoons :-(.  But the other two new units - both Grenadiers, gave a good account of themselves on the day and I think it might be useful to tell you a bit about them. 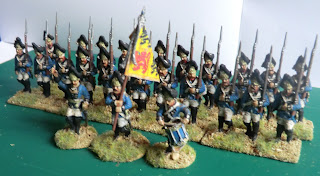 First up are my "Grenadiers de Hainaut", fighting in the service of France. These had their origins in my desire always to do something on the cheap, and I had a good look on-line at the new Victrix plastic Austrian Napoleonic Grenadiers, and thought......Hmmm....I can do something with them. They are 56 pretty well all usable figures for around £18 and I needed to do a unit of 24 as a first shot.  I chose to model them on Eugene Leliepvre's splendid looking "Volontaires de Hainaut" in Plate E of Osprey's Louis XV's Army - Light Troops and Specialists. Apart from practically identical bearskin hats I thought the combination of light blue coats and black facings was really cool. There was some work to do however, to make a decent match. Here are views of the original sprues. 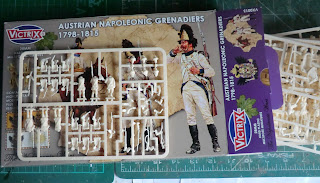 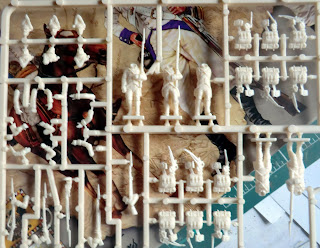 To enable these Grenadiers to travel back in time to circa 1760 I had to make their hair look like an 18th Century pigtail and their gaiters to be above the knee, not those "modern" Napoleonic shorties. To do this I used Winsor  & Newton Galeria Acrylic Structure Gel, painted on with a brush in layers. I use this to add body in my acrylic landscape paintings and it comes in handy for some model projects too where all you need is a thin layer which would be a bit difficult for the non-skilled like me to do with Greenstuff. I cut my losses on the backpacks - just not glueing them on at all, and cutting away the cartridge box and sword to fit separately. Here is a back view showing that I went a bit mad on some of the hair-dos!

I didn't know what to use for a Regimental Colour, but as I like to make my own anyway I just looked up Hainaut or Hainault on Google for inspiration. Very quickly I came up with the coat of arms and digested a potted history showing the chequered fortunes of that  area of the Low Countries, which suggested I could get away with just using that emblazoned with "Comte de Hainault" in gold lettering, so here is the Colour Bearer: 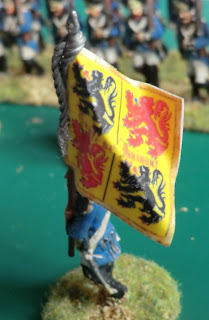 I still have enough Victrix figures for another battalion of grenadiers but at the moment lack inspiration for what unit to depict - maybe Grenadiers de France with the front plate of the headgear filled in, though any suggestions from my learned readers would be welcome please.
Next for the painting table, a much easier job - Prussian style Grenadiers for the "Imperial" side:

I had a nice batch of Old Glory Prussian Grenadiers which are full of character but unfortunately in several slightly different variants of the march attack stance. I selected as compatible a bunch of 24 as possible and there was no conversion needed on the rank and file figures. For the command group I chose a Foundry officer, looking quite swaggering with a holstered pistol in view, a spare Old Glory British drummer who still looked the part to me, and a Front Rank officer whose cane could be be cut away and a Colour substituted.
For the uniform I used  the Hesse-Kassel Leibgarde zu Fuss from Plate F in Osprey's "Frederick the Great's Allies 1756-63". The artwork of the Embleton's has been an inspiration to me ever since my eldest brother treated me to my first copy of "Look and Learn" magazine way back in about 1962! Again I wasn't too fussy about the flag and used the standard  Hessian stripy lion on a white background. My upscaling from a scanned version required a lot of cutting out of pink background and I lost a fair bit of the corner cyphers in the computer. However, simulating it with a fine liner pen seemed to give an adequate result viewed at "wargames distance". 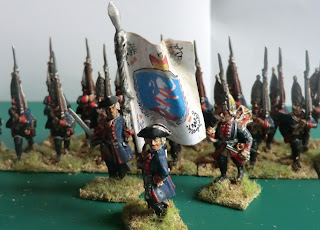 Reading about the rather difficult heritage of Hessian regiments at this time, especially those which became Garde or Grenadier battalions, I just called these "Erbprinz Grenadiers", after all, every Germanic Imagi-Nation should have some!
As luck would have it these two battalions ended up battling each other at the end of Le Pont de Futon, and both retained enough strength at the end  of the game to take their places in the battle line for the next set-to between Savoy and Reikland.
Posted by Chris Gregg at 18:08