Rivals rally for Round Robin

Every year the Oxford Wargames Society organisers use their December wargaming Sunday for the benefit of three other regional clubs by staging a "Round Robin" fun gaming competition. The idea is that each team fields four players who rotate throughout the day over four games. Each game is timed to take only 1.5 hours and guarantee a result in which 3 points can be divided as the GM sees fit between the four players - usually 3,2,1 and 0, but not necessarily if there is a tie. The Oxford Society guys spend weeks designing and play testing the games prior to the event and put up all the resources, including the hired hall and free tea, coffee and nibbles. It's an amazing free day of original games and is always fun and a good challenge. My club, Greatfield Wargames Group (Cheltenham) has been very fortunate to be invited to compete for the last 9 years and occasionally we've won the coveted "Round Robin" trophy (shown below). In the spirit of the RR it is home made and bears mostly homemade winners labels. In fact it is totally pretentious of  the Abingdon Club to have bought a professionally engraved brass plaque for their win! :-). It is rather tatty due to being constantly ferried up and down the Thames valley from the Chilterns to the Cotswolds and being passed round winning players. 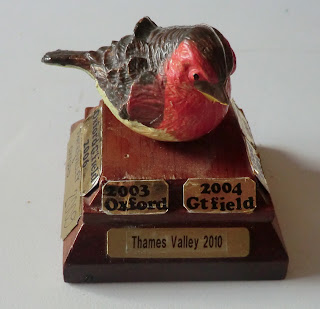 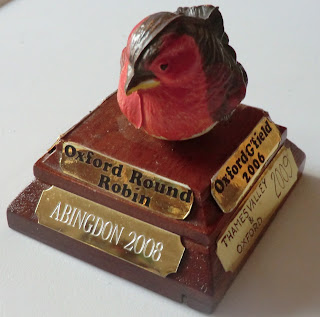 This year our team consisted of me (Chris G), Mike, Peter and Edward. I'll give you my personal impressions of each game, but I can't pretend my experience will reflect that of everyone....it's a bit like being in the firing line of a re-enactment regiment - you're so focused on your own enemy you can't take in what your comrades are doing.
The first game I played was organised by Kevin and called "Predators". It involved a small number of futuristic warriors, superbly painted Copplestone figures, and really nicely made simple terrain. The idea was each team had to search each of three rubble areas to find a missing piece of technology from a crash. Dice scores notionally represented a successful search and the winner was the first to get all three. Killing opponents was incidental, but could act as a tie breaker if necessary. We played it twice in the time - once as Marines and once as Predators because, not surprisingly, their numbers and skills were very different. I came second equal. Here are some pics of  "Predators": 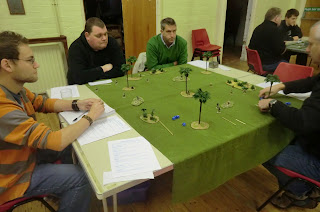 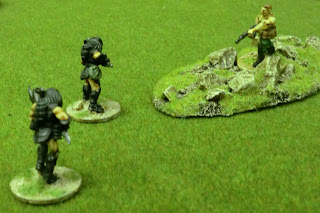 Kevin was willing to share his game ideas and the rules and I've put a copy in my "Downloads" Sidebar under "Miscellaneous".
Next for me was "Orc raid". This was a dungeon exploration game by the ever devious Mark Barnes and had all his usual hallmarks - simple concept with nice figures but made complex by the amount of choices available to players. Each team had 8 orcs or goblin type creatures who are breaking into a cavern system which houses Dwarf treasures. In essence 2 figures arrived at cavern break-in points two at a time according to a card drawn initiative system and then explored, discovering the corridor and room configuration and treasure as they went. Treasure hoards were neat little cut down luggage labels valued at 1, 2 or 3 points so the hole could be threaded onto orc weapons and literally carried by the figure with cumulative exhaustion effect. Obviously you could fight opponents and steal their treasure and fend off very angry dwarves when they eventually arrived to take revenge  (Mark can be a bit scary as a hammer waving dwarf!) 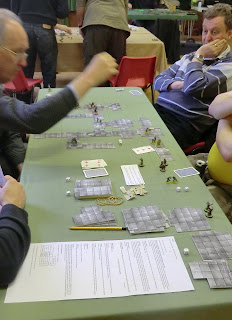 My participation was notable for: - not getting any initiative in the first couple of critical turns, so constantly picking up the treasure "dregs" left by those carrying higher value luggage labels, choosing dead end routes to explore rather than finding treasure rooms, and not being particularly successful in any of the fights I chose to pick. Nevertheless you couldn't fail to be fully involved and have a load of laughs even when your score result is a big zero!
After lunch and a bottle of rather nice beer, I was feeling a bit mellow and became a burgher in charge of a  "City State" in the game organised by Dillon Browne. This was rather like a board game played with 15mm 17th Century musketeers and with model buildings to match. A gridded road network had "cities" and "towns" at the intersections, reached by movement in squares. Each player was alloted a City and a small army, and a mini-campaign system was used to represent the income of cities and captured towns balanced against the upkeep of standing armies and mercenaries. The real innovations were allowing bidding of your money for mercenary figures to augment your army, auctioning the initiative cards to the highest bidder, and trying to bribe a neutral city state to gain influence and more troops. The winner would be the player with the most money at the end of the game - we started off with 100 pounds each. Well, I'm naturally cautious with anything to do with money, even if it was only bits of paper figuratively bearing the visage of King Dillon I, and that beer was making me a bit lethargic so I played it cool to start with. Consequently I never gained the initiative, only won one town and began to think there was no way I could win, until by Move 3 I sussed that there was a way to do nothing but keep taking income and try to get the others to spend their money. A kind of arms race was going on between two players fighting over a town and they seemed to be prepared to pay up to 15-20 pounds for a base of mercenaries at the auction, so I pretended  to be interested to keep the prices high. This worked well till move 6 when I ended up being the successful bidder and got some mercenaries of my own for £12! Suffice to say I did nothing much all game except trying to look a bit threatening and engaged, and just contented myself with counting (behind my hand) my lovely growing income. When time was called my strategy had worked and I had £169 compared to my nearest rival's £155; the keen fighters had only just made a profit being down around £120-130 each.  "My most boring game but one of my most successful victories", thus I apologised to Dillon (who took it very decently) while collecting my 3 point win. 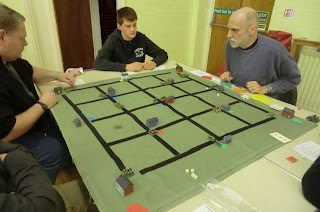 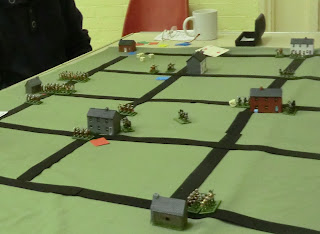 Effects of the beer had now worn off and I was raring to get stuck into the last game which was "The road to Genappe". It was organised by Paddy who seems to love off-beat scenarios, and this was a Napoleonic in 6mm, along similar lines to his iconic and highly successful "Crossing the Berezina" of a few years past.
The remnants of Napoleon's army was fleeing in large numbers from Waterloo towards Genappe, hotly pursued by Prussian cavalry. Two players had the French (about 18 stands each) and two players the Prussians (about 9 stands). It was basically an initiative card driven race across a squared table to see how many French could get to the safety of the town before being cut down or dispersed by the cavalry. The infantry could use the cover of woods for some protection and to slow down the Prussians, as well as turning to fight should they choose to do so. A key cavalry tactic was to move on past the infantry and turn to cut them off from the town - but easier said than done.
However, the wargaming gods were smiling on me by now as my Prussian cavalry cut down 21 French stands (the record was 22) for the loss of only one of my own. In the second installment of this intriguing game my French managed to outrun the cavalry for an extra turn by a good initiative draw (Ace of Spades!), then turned some stands to fight and incredibly slaughtered three Prussian stands in one go. Not only did this give my other groups some respite but caused my tormentor to reign in some of his survivors so I made more headway. Although the other Prussian commander managed to disperse several of my stands on the very threshold of Genappe I still got a record 10 stands home.

By this time the other games had finished and the scores were in - but unknown to me. Before the scoring of my game Peter had whispered in my ear "You've only got to not lose this one and we've won the competition". And so when both games scores were totted up I had cleaned up with another 3 points and we had indeed won the Round Robin trophy for 2011.  But as this was our third outright win (as opposed to shared) Oxford graciously presented us with the trophy to keep, but we have to provide something suitably humorous for which the clubs can compete next December. You can see from the score chart that it was a real team effort - particularly our runaway 4th leg. 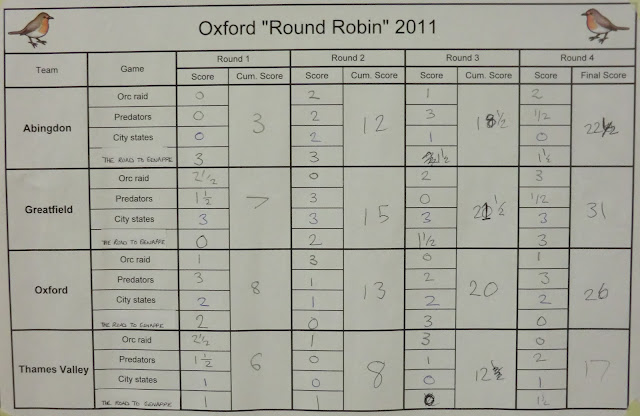 I need to point out that despite the esoteric nature of the games this "competition" is played by all in the "old school wargaming" spirit of gentlemanly behaviour and fun and it's a joyous way for a wargamer to run up to Christmas. Sincere thanks to Oxford for their efforts and hospitality and to Abindon and Thames Valley teams for letting us win by getting such abysmal dice rolls and initiative cards!
Dillon is happy to field questions about any of the Oxford games and can be contacted at
dillon.browne@btinternet.com


And finally.
It's worth me showing you a glimpse of Paddy's very clever "Crossing the Berezina" game. This board was made by me and the figures (MiniFigs and Hinchliffe) painted originally by Mike but given "snow effect" and basing by me. This is now in the possession of Peter's after school gaming group who seem to enjoy it. 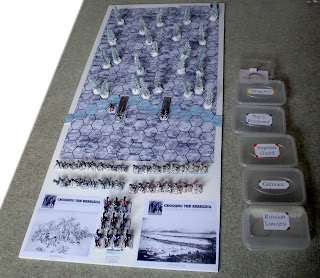 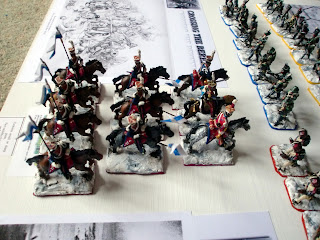