I said in my sidebar "About me" that I get to play games with my grown up kids occasionally and Christmas is generally the best time for this. We have 3 of the offspring, plus partners, for the festivities this year and they all seemed keen on my suggestion to put on a light hearted pirate treasure seeking "wargame". I was inspired by Charles Grant's "Trouble on Treasure Island" scenario in the excellent Battlegames "Table Top Teasers" book .
http://www.battlegames.co.uk/admin/battlegames-shop4.html
This gave some terrain ideas and the basic shape of the game.
I then bought Foundry Miniature's "Compendium" at a bargain price wargames foundry compendium and that has a section on pirate games with lots of stimulating photos and more ideas, as well as complete, but simple, game rules. That game includes Chance cards, many of which I have used in my game. However, neither of these was exactly what I wanted for my family, or could do with my figures, so I needed to work up something original.  Now is the point to own up that I don't actually have any Pirate miniatures, but I do have a lot of various 18th Century types that could be "pressed ganged" into treasure seeking service in some way, and more on that shortly.
Having the concept of the various participating groups in my mind I needed to set out the terrain so that I could work out a good deal of clues in order to have plenty of variety and scope for maybe 5 or 6 players. Here's what I came up with using my home made terrain tiles with lots of scenery to disguise the joins and sheer-drop edges. Click to enlarge 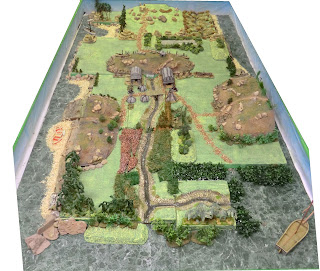 I decided a "wild" peninsula, occupied by cannibal natives attached to an island governed by a Colonial power would suit my purpose in bringing treasure seekers to the game area as well as "Government" types who were not above a bit of corruption themselves. This resulted in two groups of officials, one of which had 10 figures, the other 13 including 3 to crew a fixed cannon in a redoubt, and 4 groups of "pirates", two of which had 3 gunners and  fixed cannon on board ships just off the coast. In addition there are two groups of 8 natives based in the village with different objectives directed against all the other parties. I knew not all groups would be used in every game but it gives variety as each group has different capabilities, hopefully well balanced.
In my "Downloads" sidebar under "Pirate game" there are various PDFs covering my rules, full briefing sheets for all groups, the choice of Game master-controlled Clues to guide the various parties, and some cards. However I haven't included the Chance cards in case there are copyright issues. I suggest you make your own up or buy the Foundry book! In the spirit of "skirmish wargaming" the groups unashamedly feature characters inspired by some of the intended participants, either by name or character traits, or both!
Everything complete, I had a test game with Jon and his girlfriend Katie a couple of days ago which helped me modify the Chance card content and drawing system to give a smoother game - thanks guys. It was quite amusing to see that Jon's "Revenue Men", with his background as his Dad's wargaming assistant for most of his youth, were focused on ridding the peninsula of as many of my natives as possible, whereas Katie's "Trelawney's Treasure Seekers", in her first "wargame", sensibly focused on following the clues and finding the treasure!
Just to give you a taster of the other groups here are some more pictures 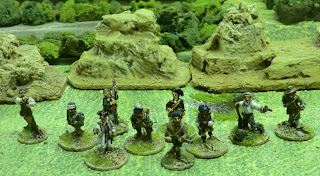 And of course there are a few Games Master tricks up my sleeve too in the form of Santa Gunn the castaway hermit, Goosy Goosy Gander the walking Christmas dinner, and Wild Rover, the old sea dog!
After I've recovered from the festivities (yes, my game includes "Contraband cards " with compulsory swigs of rum, ale, cider , port or wine!) I shall post some more pictures and hopefully an insight into how the main game went.

If you care to use any of the resources from the sidebar downloads please let me know how you got on.
Meanwhile - have a happy holiday.