I rather naughtily last time left my readers hanging just before the last moves of our refight which took place in mid-August 2021. That was because after nearly a full day's play and 3 hours of game time (9 moves) the Saxons had held on without collapsing and were being reinforced by the arrival of the C-in-C, the Marquis de St Pern. He brought up a brigade of French Grenadiers and a brigade of line infantry so we needed a bit of time to dwell on the consequences, I thought my readers might like that too.

The first photo is a different, longshot, view of where I left the last post. In the distance the French reinforcing Grenadiers can be seen emerging from the wooded Ufhofen ravine. The left flank Saxons have formed a box-like defence from Langensalza town round to one of the line-of-communication routes back towards Eisenach but have been pushed back from the Sumbach stream.  General Wangenheim is down there looking as if he is forlornly trying  to summon another attack by the mass of Hanoverian cavalry, which has been initially repulsed and now is reforming to try again. Towards Langensalza  the Allied infantry is reforming on the high ground, but in the Allied right centre Colonel von Donop's Hessians are at last on the move, although they have to negotiate dense woods held by French skirmishers on their way across the Sumbach 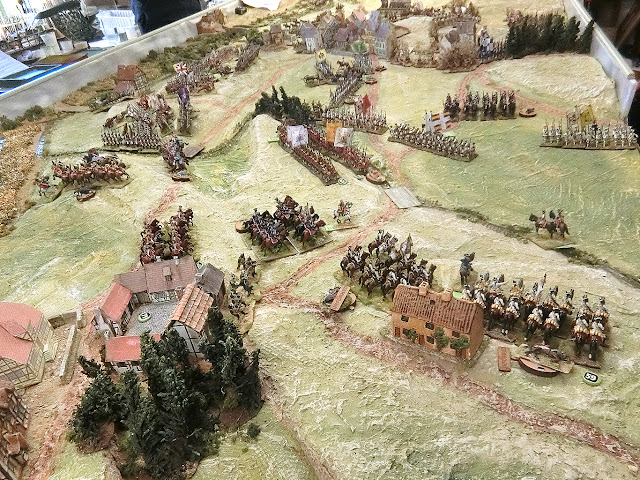 The view below, over Langensalza, shows the Zieten Hussars by Rahsenmuhle farm then the Prussian Grenadiers still forming a solid line in much the same position as they had occupied for about an hour and a half. Cannon fire has repelled Saxons from the nearest buildings but de Stainville's men still make a resolute defence across the Judenberg high ground behind the town.  And beyond the peak St Pern's Picardie Regiment is marching to assist.   But the French right flank cavalry have completely collapsed and dispersed except for the Schomberg Volunteer cavalry.............. 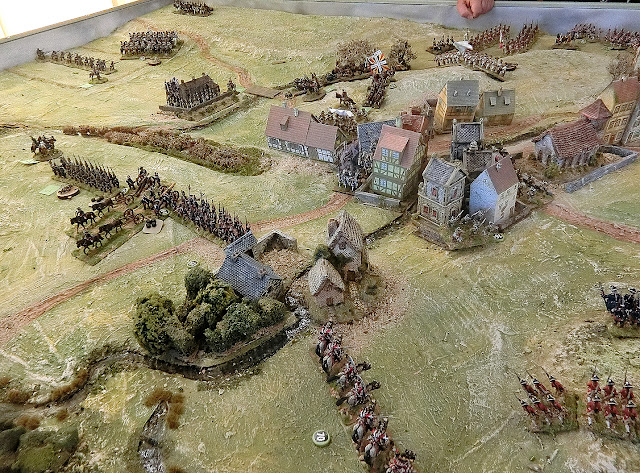 .............They had been forced to retreat with 4 Hits and the fast follow up by Prussian Cuirassiers is ensuring they don't have enough distance to rally and reform. In fact in Move 11 they were chased from the field.

(Above) In the Allied rear the Royal Nassau Hussars had caused considerable concern and disruption, and destroyed one Hanoverian battery, but at last Luckner had caught up with them, leading his Hussars in a frontal charge. The two small Hussar units effectively neutralised each other but at least that left the Allied infantry unhindered in their advance. At the extreme right the Volunteers of Austrasie skirmishers have emerged from the wood to fire into the flank of von Scheele's Hanoverian infantry.
Below Comte de Solms' Saxon brigade is still viable. The Saxon Guards and converged Grenadiers have proved too hard a nut to crack and have now fallen back after three separate Allied infantry attacks over the previous two hours. Undaunted, the Hessian Grenadiers have moved downhill to keep pressing them. 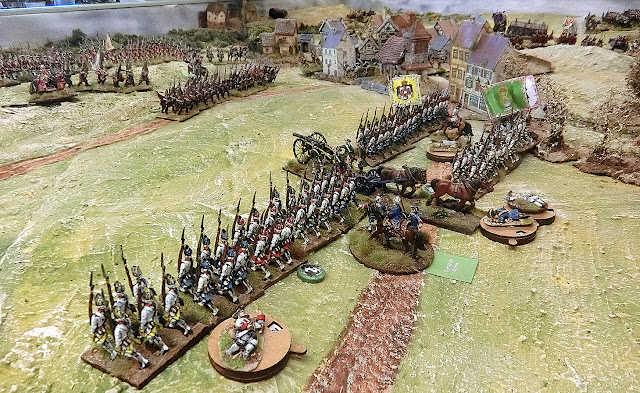 East of the Judenberg Picardie is beginning to form a battle a line to extend the French right flank and show those Cuirassiers they are open for business! 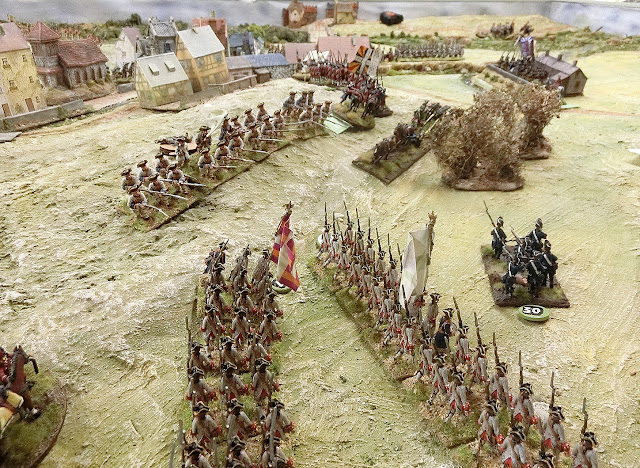 With the infantry of the Royal Legion still holding the Judenberg Hof and the rest of the Saxons firmly in Langensalza town there was little prospect of the Prussians being successful if they tried to attack here. 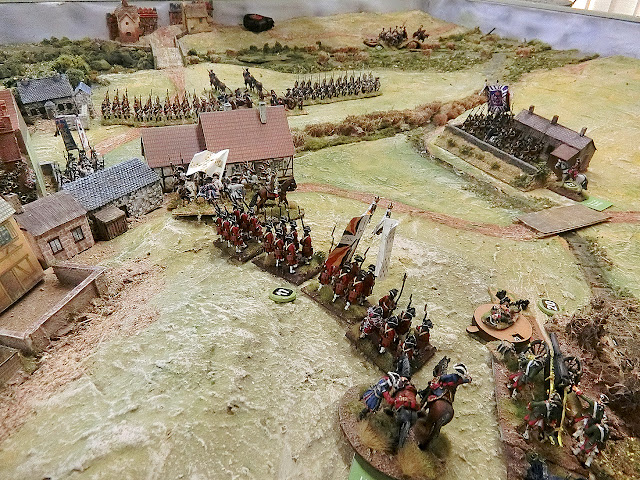 So there was something of a natural break all along the battle lines and the time had rolled around for our table booked for ale and victuals at the local 18th Century village hostelry. "The Butchers Arms" would prove a very welcome place to debate how things had gone so far and decide what we did next.......
In response to a special request, here are some "close-ups"; or rather me cropping some interesting detail from standard game photos! I hope they are acceptable. 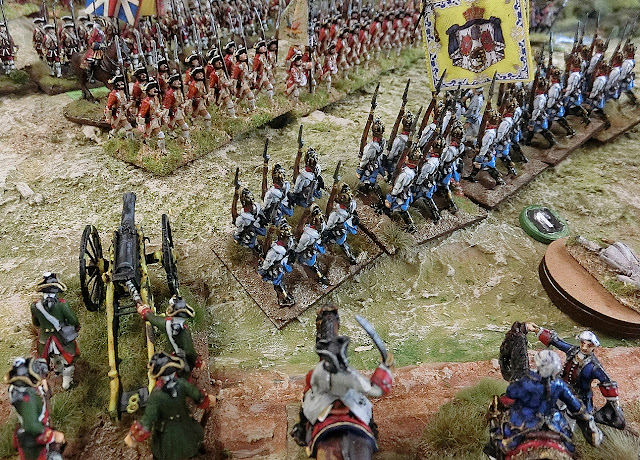 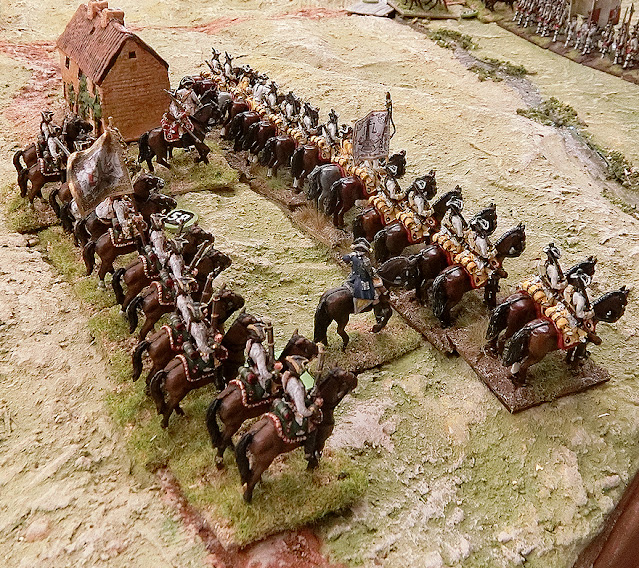 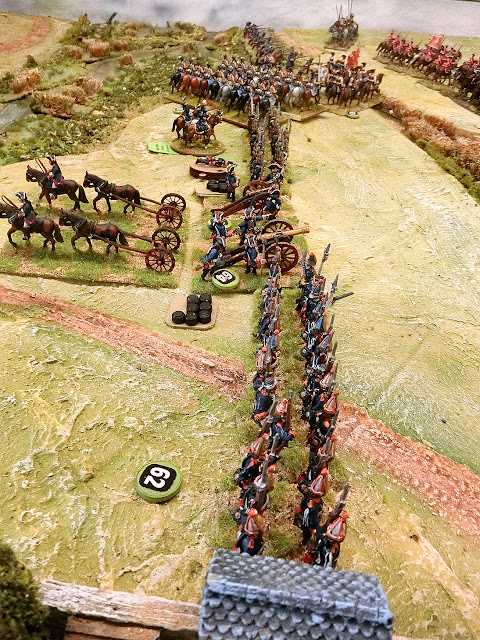 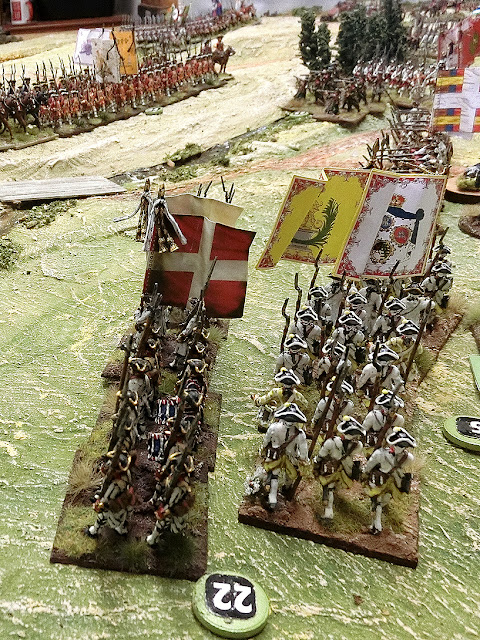 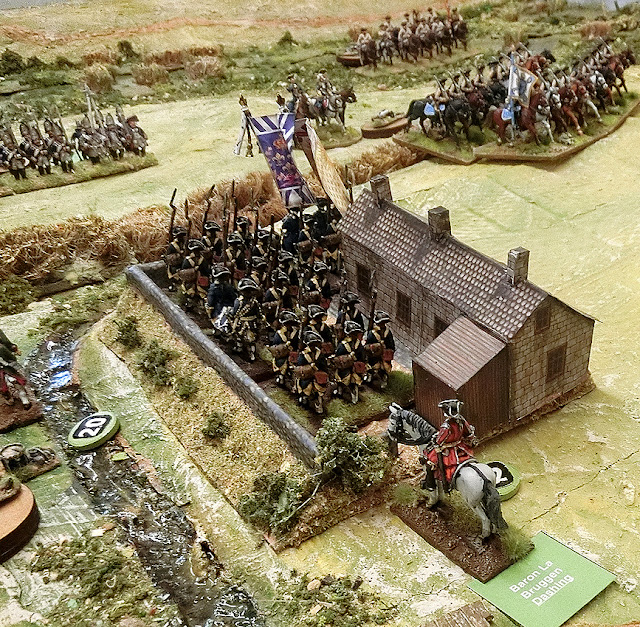 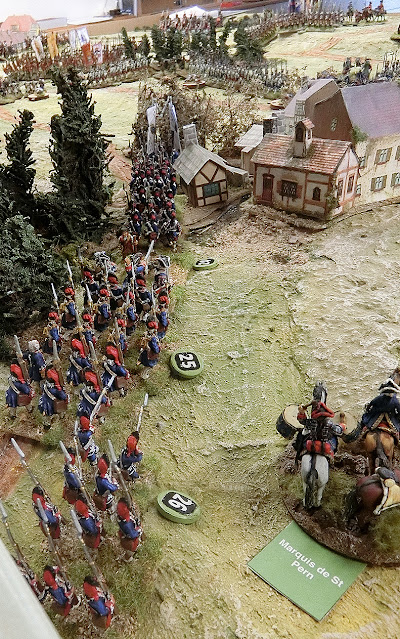 Conclusion
As you will have gathered from Parts One and Two of this mini-series we had put a lot of effort and planning into this refight so I was not leaving anything to chance. With the forces we had available I could imagine that we would not finish in the 11 Moves we had done and by the evening of the main play-day. So I had got agreement from C-in-Cs Guy and Paul to come the next day, 20th Aug, to continue and finish it off. We invited others to join us for whatever of the two days they wanted. So Martin and Richard could only make the first day and we had lined up Ken and Kevin to come the next day and see what was needed. So we were not committed to a fruitless day's gaming I had prepared a quick and dirty DIY scenario for Ken and Kevin to lead on the next day if needed (more on that later).
So  unconstrained by any artificial time-outs, the conversation over dinner ranged across the historical setting as well as the vagaries of initiative dice!!  The main points from the conversation were:
So we declared the game at an end with a French/Saxon victory and went back to look at the "scorecard" I had been keeping, just out of interest.
It records Army Points (in my system) lost only from units "Done For" and not losses among units still on the field. The Allies started with 100 Army Points and the French/Saxons with 84. The chart shows both sides had suffered 18 Army Points lost by the time we stopped. Testament to how closer it had been in purely attritional terms, and credit to the skill of all the players that the toll was not higher. 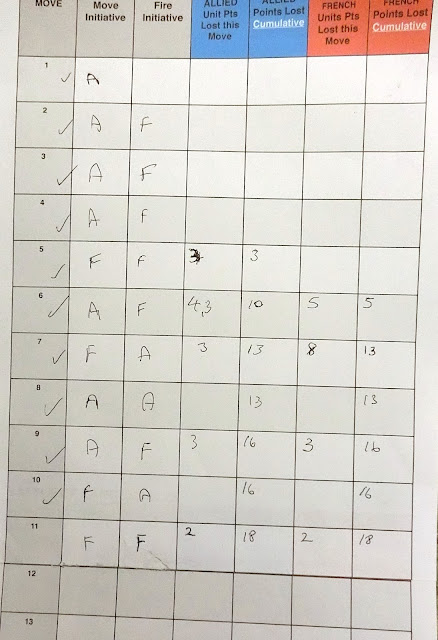 Wrap-up
This had proved to be yet another mini-project which we had managed to bring together by combining collections and ideas - Guy's, Paul B's and my own and I'm incredibly grateful to them for going along willingly under my direction and for the time and effort they put into packing and organising their armies and bringing them to Oakridge for our entertainment. But the greatest satisfaction for me was that it was the first Seven Years War battle I had analysed and researched (a bit) and devised the terrain, orbats and scenario for completely from scratch. It was uninfluenced by any other wargamer's take on the real thing, maybe because the real battle was so one sided it was not worth their attention. I hope I've shown that you can make a very acceptable "what if" version by looking at the wider strategic situation and the forces in close proximity to the battle area. As a reminder to anyone who wants more detail here is a link to my resources for the game Battle of Langensalza.

I did not notice till we were well into the game but our version bore  a remarkable tactical resemblance to Waterloo.  The Saxons are Wellesley's "infamous" army - an infantry-strong force of units of mixed ability containing some stalwarts and some ne'er do wells, but mostly average. They have to hold a fairly wide area  which has outlying strongpoints and high ground but not enough resources to  put up  a good show everywhere. The Prussians are represented by the French main force arriving when their opponents are stressed and weary and enabling the offensive to be taken.  The Allies are strong in cavalry and artillery; just like Napoleon's army they have a significant boggy area to cross which holds up the deployment of the guns for an hour or more. They have the tactical opportunity and space to outflank, but only if they are quick and resolute. A subordinate commander has access to a lot of good cavalry and if reckless he could lose them to the musket fire and bayonets of resolute infantry (happily Paul was sensible!). Both sides have a good corps of Grenadiers/Guards which are destined to meet in the centre of the field........

However, for us, the reinforcements merely brought the defenders to parity, not giving them an overwhelming superiority.

I hope you have enjoyed reading about it and seeing the pictures as much as we did organising and playing.  Any thoughts, comments or questions very welcome and thanks for staying the course.

And those who worry about my custom sculpted terrain being a "one trick pony" I have had 7 more games on it since in various guises and in three different historical periods - more on them later.