Thanks to all those who have visited, bid on, or are watching the German support weapons and vehicle models I put on EBay a few days ago and featured in my previous posting, here's a link world-war-two-20mm-german-support.  Thanks also to all the purchasers of the German tanks, Normandy landing special equipment and the infantry battalions sold in earlier weeks. Some items have produced amazing prices (to me anyway) and others I've been surprised have only reached the basic starting price. The moral is, if you are looking for some 20mm or 1/72 scale toys for your World War Two battles, you might get a real bargain.

This posting is really to advertise that tonight I have put on another 20 auction lots. This covers all my Allied (mainly British) tanks, self propelled guns, armoured cars, towed artillery, jeeps, bren carriers, half tracks, etc and they can be found by searching on seller 7073chrisg for "20mm World War Two..........

Postage is a nuisance as Royal Mail charge one price - £2.70, for First Class small packets up to 750 gms in the UK. Since most of my items are only about 150-250 gms it's not good value for money on a single item, but, on the brighter side, if you win several bids it is not likely to cost you any more in postage. Obviously rates are different for overseas destinations and rise in smaller increments.

Anyway, getting rid of my collection does give me the opportunity for some nostalgic looking back at photographs of some of the World War Two games on the sand table. Here are a few of them, in particular concentrating on the British equipment now for sale.
First, three pictures from our refight of the "Rapid Fire" Mount Ormel scenario 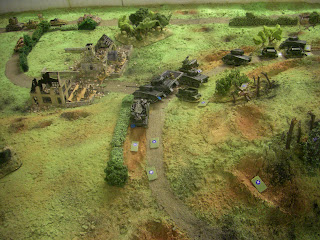 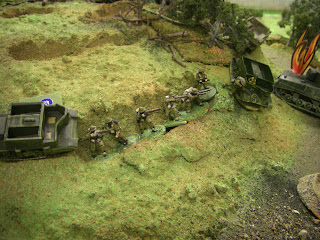 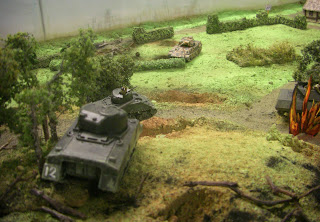 And to finish, some photos from my rendition of the Kampfgruppe Oppeln
counter attack on the afternoon of D-Day 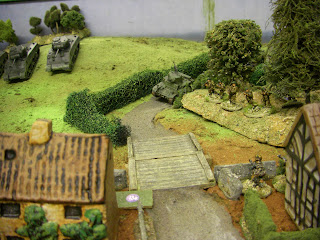 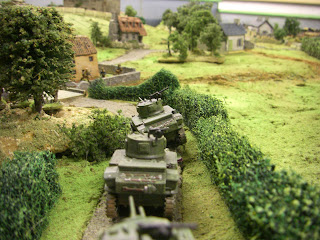 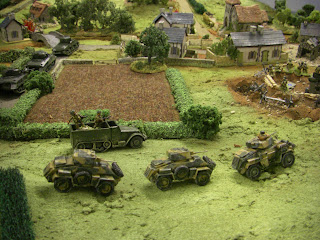 If you love these little Humber Armoured Cars as much as I did you can buy them - here is the link
British recce vehicles on EBay
Posted by Chris Gregg at 23:54