I didn't realise when I  started this clear out, after 26 years in the same house, what a nostalgia trip I had opened up.  I've successfully sold off all the Normandy troops, vehicles and special equipment and now I'm onto the plastic Airfix, Revell and other 1/72 scale figures which I started with when I discovered "Rapid Fire!" (Edition 1) in about 1995.  I got fascinated with the early part of World War Two by the superbly evocative scenarios, figures and terrain in that book and with a bit of research realised there were some good games to be had around the doomed British assistance in  the defence of the Greek mainland...and then that could move naturally into the more famous battle for Crete.

Forgive me for wanting to share some of these old photos with you (pre-digital and micro zoom etc) and use it as blatant advertising for selling many of the items on EBay - I only get one shot at this, then they are gone!

Here are two photos from our first big battle which was a refight of the defence by the Allied "W Force" rearguard around the town of Vevi in Northern Greece. 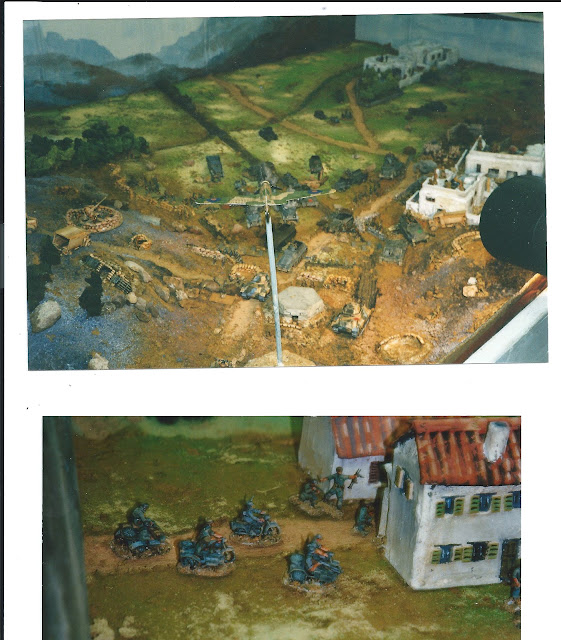 Top one is a Hurricane's eye view of the attacking panzer column which it is about to strafe. The Roco Minitanks half tracks are for sale on Ebay for about another 3 days from time of writing, here half tracks.
The motorcycles in the lower photo form part of a set of 9 vehicles and riders and are mostly scratch built and heavily converted. I'm very proud of them and will be sorry to see them go. Many more photos here German motor bikes but only about one day to go if you wish to buy them.

When we moved the campaign to Crete we started with the surprise attack on Maleme Airfield. 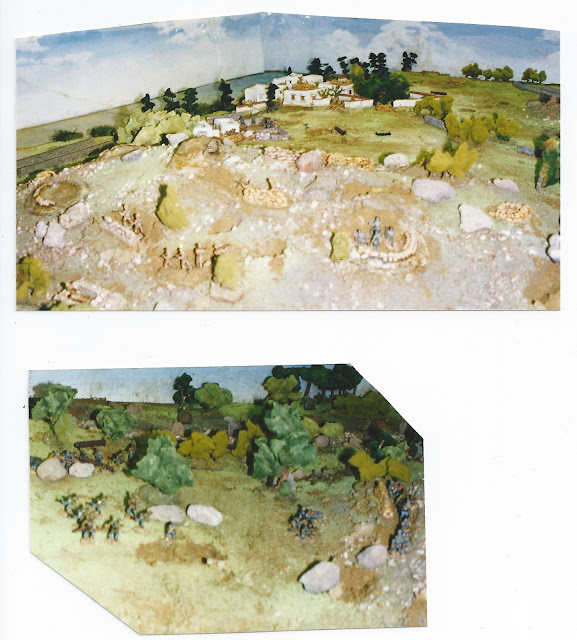 Top photo shows isolated pockets of German paratroopers gradually overcoming the Commonwealth troops' defence of  trenches on the high ground overlooking the airfield, and Maleme town beyond. Below, more paratroops and combat engineers have landed in gliders and are joining in the attack. There are several auction lots for these Germans and British/Australians such as
Fallschirmjager
German Combat Engineers
Allied infantry
Only one day to go on the Germans and two days for the British.

By the way, all these games took place on my old sand table  (at that time 7 feet x 5 feet). 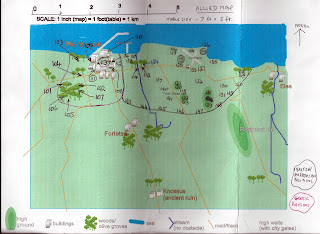 (Hmmm....seeing "the Two Charlies" on this map reminds I'll be glad to get back to Hussarettes one day......)

and the Allied Brief and Order of Battle (using early "Rapid Fire!") 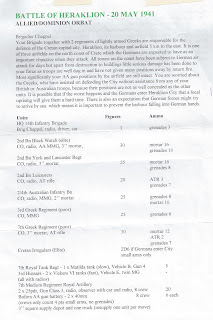 and finally the Allied commander's (Mike T) hand written orders. Sadly I don't have the German equivalents. As you will see from the map Mike had a big job to sort out his troops into numbered groups and deploy them (including a lot of dummy markers) on the map in trenches, dugouts and buildings. 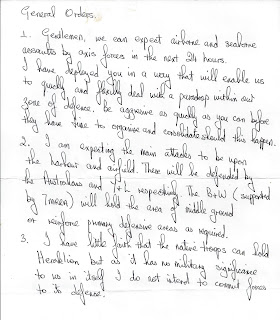 Here are some photos of the game: 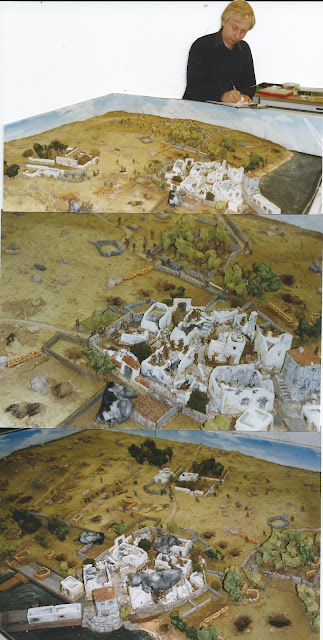 Top - a very youthful looking Richard finalises the orders for the about-to-arrive Germans.
The other two photos show my models representing the partially damaged city of Heraklion. Most of these are for sale on EBay (with better photos) here Mediterranean buildings  and Mediterranean ruins. The Greeks, in the guise of Airfix Russians are available here Russian figures

One of the last games I can remember us playing in this genre was a fictitious Aegean island-hopping game involving various British and Germans but also Italians,  Greek regulars and also Greek militia and partisans
Here are some photos: 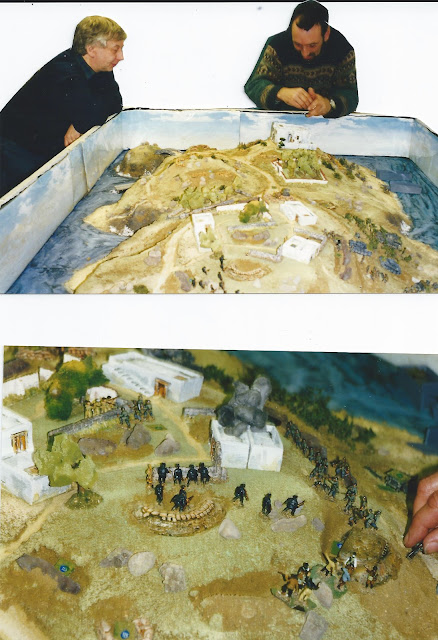 Top - A fifteen years younger Richard and Mike contemplate the battlefield which was a steep sided island with beaches, cliffs, winding tracks, settlements and agricultural obstacles. Below - local Greeks, aided by British sailors in the background, try to resist the highly professional German paratroops. And there are those buildings again. 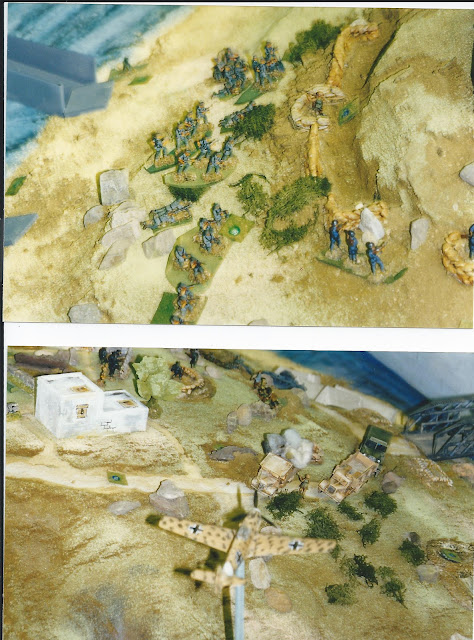 In this one, at top, a German Mountain battalion has come ashore in landing craft, and with their Italian allies (a few visible in bottom right corner) are attacking to take a steep hill track. Below, a Messerschmidt shoots up the reinforcements who have come across a girder bridge. Some of these models are still for sale if you are quick:
British sailors and infantry
Greek Partisans and Militia
German Mountain troops
Italian infantry

Well, thank you for sticking with this. If you have any comments or questions please add them here, or email me personally Chris Gregg   I've also got European style 20mm and 15mm buildings and ruins on EBay at the moment, with rather more days to go on the auctions, and I hope to blog about them shortly.