Every year I go to "Warfare" at Reading, staged by the Wargames Association of Reading (WAR) and, in my opinion it is a show that has it all - a wide variety of games, many of very high quality, more traders than I can possibly give enough time to, and a big Bring and Buy that is very well organised and run. It's a weekend show and this time I went on the Saturday, it seemed busier to me than ever before, but maybe that's just a "first day" thing.
I had lots of friendly chats with traders and gamers and also did well at the B and B - disposing of my 20 year old 15mm Peninsular War armies (I expect they will turn up on Ebay!) and getting the bargain of a lifetime - about 200 unpainted Foundry and Front Rank 25/28mm Prussians to add to my growing metal mountain to augment the Imagi-nation armies.

I always liked to share my photos of the best games in the "Greatfield Galloper", but this year I have a blog instead and so can present the efforts of some of these very talented people to a wider world. 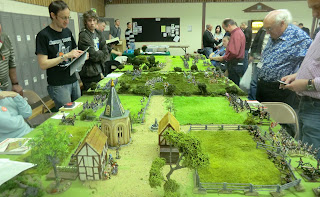 This was, in my opinion, the best looking game at the show. Run by Skirmish Wargames in their "one true scale" - 54mm, it was a proper battle, not a skirmish, using the Black Powder rules, based on action at Leipzig in 1813. Maybe I'm biased  as I have known the ringleaders - Mike Blake and Ted Herbert, since the late 1960s when we all started and they were pioneers of the idea that each man could have personal characteristics, and that very small scale actions could be gamed with realism and fun. These days they have stepped up the scale somewhat, but, as you can see from the photos, every figure is treated with a flair for detail and accuracy, as if victory depended on him in a big battle just as much as in a skirmish. French, Russians, Austrians and Prussians were battling for supremacy over a very realistic terrain notable for me by the hairy rugs that gave fields with tall wild grasses, perfectly in scale with these bigger figures.
Mike explained to me that the size of figures easily adapted to "Black Powder" by halving the amount of figures for a unit, and the game went quite quickly - they were due to have a different scenario on the Sunday. In fact, adding his to other good comments I've heard about BP I was inspired to seek out a special show deal of the "Black Powder" rule book and the 18th century supplement, "The Last Argument of Kings".  At £40 this was a bit much for an "impulse buy" so The Duchess was quite amenable to paying for them and keeping them for me for Christmas. That will be a treat to accompany the after-dinner port in Greatfield Manor, and then it will be a while later before I can organise a game to try them out. 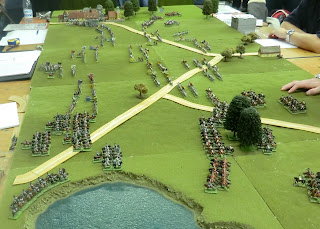 Another game I liked, because it was Mid-18th Century, and had lovely figures and buildings (in 15mm), was the Hastings and St Leonards Club rendition of Chotusitz in 1742 (above). I had a nice chat to Graham Cross who was responsible for the armies and he told me they were the result of being invalided with a broken leg a few years ago. I sort of thought that my hospitalisation this Summer might have had the same beneficial effect on my own figure painting schedule - but I recoved far too quickly! Anyway - a really nice effort Graham, thank you. Please take a look at his work in detail here:
https://picasaweb.google.com/109237116437799043486/HastingsChotuzitz1742?authkey=Gv1sRgCPGKioikmojtZg 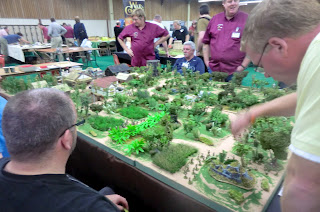 Finally, one other game seemed worth  my photographing. This was a battle between Japanese and Allies somewhere in the jungles of South East Asia in the early part of World War Two in 28mm, put on by Battle Group South. It included a river port and buildings full of character as well as the Japanese and other soldiers and small tanks you don't often see on a wargames table.  It was very convincing, and although my general photo above is not well focused you can enjoy those sinister Japs in detail by viewing the slideshow here.
https://picasaweb.google.com/109237116437799043486/WW2SouthEastAsia?authkey=Gv1sRgCIHs9LPQzJ66fw