About "Wigs and Wine"

Before I describe to you the battle we fought over the terrain shown in my earlier posting
http://notjustoldschool.blogspot.com/2011/11/spookily-deserted.html
I'd like to tell you a bit about the rules we used which I've called "Wigs and Wine" (WiWi for short). 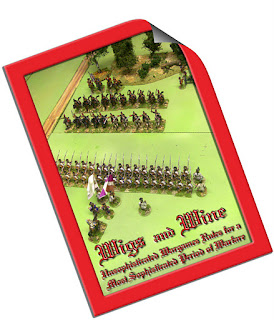 They are derived from "Wigs and Wampum" (WaW) my rules for French and Indian War gaming. WaW was designed for small scale battles with a figure ratio of 1 figure representing 5 men. Most players say that they give a good feel for this period and are fun and unpredictable, but, given average luck, will reward the skillful player who uses his troops properly. WaW was originally derived from a very simple set of Don Featherstone type AWI rules downloaded from the old school wargaming news group files archive. However, here in Cheltenham, we worked on them over several years to play up the Indian and frontier fighting characteristics and added usefully adapted  bits from other rules such as "Brother against Brother" and "Habitants and Highlanders". You can download a set from my Downloads sidebar, under FIW Collection.
https://docs.google.com/viewer?a=v&pid=explorer&chrome=true&srcid=0ByUrqygnzQAwZTcyZThlYjUtYmI0ZS00NmRkLTk3ODQtMjhhYzg0M2FkYWYx&hl=en_US
Moving from FIW to Europe in the Seven Years War proved more problematic as I moved, with WiWi,  to a 1:10 ratio inspired by old school Young and Grant big battalion games. The rules use the old fashioned, Player A, Player B alternate move and fire sequence, musketry volleys of 5 figures per die and 10 melee points per die. We have very few additions and subtractions but varied saving throws depending on circumstances. Morale again is simplified with a check at 10 per cent loss and each 10% thereafter, except only one check per turn. Morale can be decisive, with an unlucky and exposed or leaderless unit leaving the field with relatively few losses, or alternatively stalwart Elites fighting on down to a quarter strength. The biggest difficulty is cavalry which tend to be smaller units and so lose their 10 per cents quickly. Also because cavalry have more melee points per figure melees involving all cavalry tend to be very bloody affairs ending in near-mutual annihilation, not very realistic, and we really want those expensive cavalry castings to stick around longer!
As the battle of Futonville  is only the third big one we've fought with WiWi  we learned a few more things and are currently working on amendments to help the cavalry have a more subtle role and last longer. In addition I tried to have some "big" battalions of over 60 figures, including special rules for integral grenadier companies, as opposed to separate composite battalions. On my 9 foot by 5 foot table they proved too unwieldy, with not enough room to get into proper formations, so we'll change to a maximum of 48 figures for future games. This will  probably mean a change to 1:15 ratio and a reduction in ranges to keep in scale.You can access the "Wigs and Wine" rules from the Imagi-Nations Collection in the Downloads sidebar (I've set it to access for anyone , but please email me if you have a problem with it.). I will post an updated set when I've rewritten them. Feel free to let me have your thoughts if you give either WaW or WiWi a try.
https://docs.google.com/viewer?a=v&pid=explorer&chrome=true&srcid=0ByUrqygnzQAwNjQxZDZlYzUtMGEzMC00YTZlLWEwZmItMDNkNDJkYjFjYmJj&hl=en_US 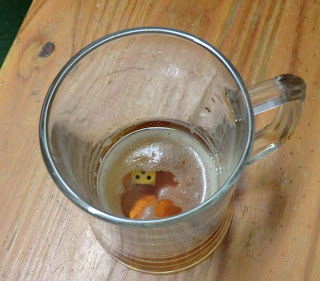 Finally, before I give a battle report in the next posting, an unusual incident during the game. At one point Pete threw his die from a distance to try to get it into the top of the dice tower, it hit the top edge and bounced......right into my glass of beer! Needless to say I didn't need asking twice to down the remaining amber liquid to retrieve his die.....but according to house rules it has to end up in the bottom tray of the tower to count!
Posted by Chris Gregg at 23:37

Email ThisBlogThis!Share to TwitterShare to FacebookShare to Pinterest
Labels: Imagi-Nation