Hussarettes: the most complex painting yet

Regular followers might be wondering why it has been nearly two months since my last post. Apologies but I've been distracted by my two-dimensional art rather significantly. Fans of the Hussarette genre, however, should be pleased as the latest commission has allowed me to rejoice once again in the theme of lovely ladies and gorgeous uniforms. You might have seen it in process in the background of my  post on the Battle of Lobositz .  Here is an overall view of the completed painting "Hussarette Aides de Camp in Spain c1810" and the story of how it came about.


As an artist I'm always on the lookout for inspiration and I wander, camera in hand, ready for an opportunity. The Duchess and I went on holiday to Andalucia, southern Spain, just over a year ago. We spent a couple of great days in Seville and much of one of them was spent in the Alcazar Palace and exploring the exotic gardens. This was originally a Moorish Palace but taken over in the Reconquista and adapted and rebuilt over the centuries to meet the needs of Spanish nobles. There are grand buildings in the grounds with elaborate architectural details and clad in classic Spanish tiling. With the wonderful trees and plants and fountains it is an assault on the senses.

While walking through a "summer house" which was like a mini-palace, I was struck by the posing of three lovely young tourists who were wrapped in conversation and completely oblivious to their surroundings. But I was able to snap a few photos and begin to wonder how I could put the moment in time and place to good use.

Later in the holiday another amazing photo opportunity presented itself. On the road between Cordoba and Grenada we stopped at a roadside cafe and as I sauntered round the back through a  fairly unkempt yard looking for the loo, I saw an old bullock cart that looked as if it could have been used to carry supplies to one of Sharpe's Peninsular War garrisons! Here is just one pic from my 360 degree photo shoot of that piece 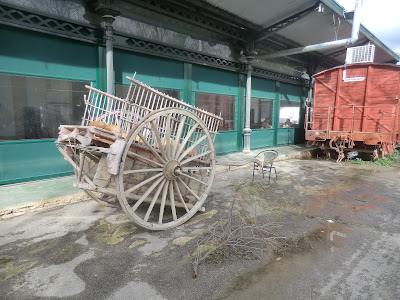 In the Alhambra Palace in Granada the Spanish tour guide, quite bitterly, told us how the Spanish palaces had been ransacked by Napoleon's soldiers and a lot of works of art stolen.......ideas began to take shape

When I got home I tried these photos on one of my muses - Ian Allen. Ian is one of my most ardent patrons and always willing to allow me to bounce ideas off him.  It took a few emails and false starts but between us we came up with the following little scene for the latest in my theme of empowered women in an imaginary "blackpowder period" universe.

It is around 1810 and the French are rampaging through southern Spain. The Army has just taken a city by storm and three Divisions have temporarily come together to share the spoils. To decide the next moves their three Generals are having a meeting in one of the palace buildings. The door is guarded by dismounted dragoons (or dragons as my French-born former miniatures-painter window cleaner called them..... dragons?? it's imaginary but not fantasy!). As it happened each general has a lady Hussar as personal Aide de Camp (well, who wouldn't, given the chance?). These French ladies all know each other from earlier campaigns but rarely meet. So what better opportunity for a catch up when their bosses are engrossed in military plans for an hour or more and they have free time to call for wine, bread and cheese, and oranges, and munch away while discussing the news from home.

It's hot, they've discarded their dolmans and pelisses, sabres and sword belts, sabretaches and cartridge boxes and headgear. Ian likes his ladies sexy but respectable so he came up with the idea of "peasant-style" blouses and I took them as far as my model would allow. I looked at references of Sir William Russell Flint's Spanish ladies to give her inspiration.

The high-level meeting has disturbed the looters and the girls sit amidst looted cases, sacks of fabrics, carpets, copper and brass vessels and candlesticks, weapons, beer barrels, and a painting in fancy gilt frame. Ian's sense of humour suggested I make it one of my own paintings, so the large print of Natalie came down from my studio wall and posed sideways in the cart! 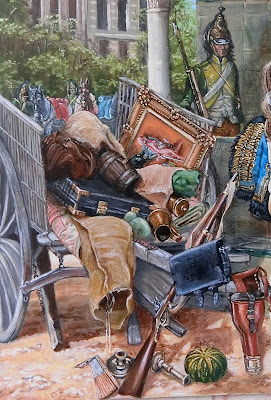 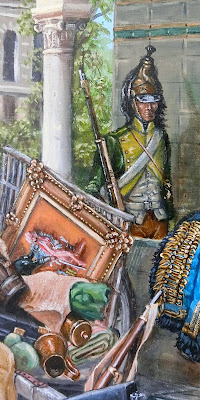 All these objects, with one exception, are artifacts I own either as antiques or reproduction art props and I set them up as large "still life" groupings in the studio. The exception is the very fine brass mounted double pistol holsters in the foreground which were taken from an internet photo.

The detail of uniforms for the Hussarettes was left to me except in colouring. Ian loves light blue and yellow, and together with the red, he specified the colours. I looked at some older paintings of individual officers or ADCs (such as below) and made sure I gave all three ladies distinctive gold or silver lace, with designs on sabretaches etc inspired by actual examples on the internet. 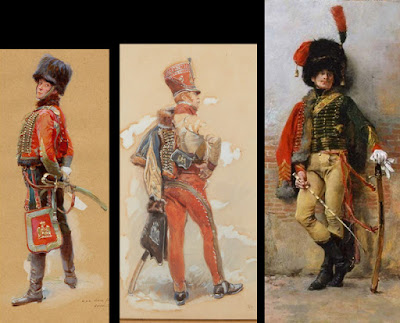 All this planning took place nearly a year ago and I was busy acquiring and making some of the props I would need. Loads of work took place using Photoshop to adapt my Spanish location photos and come up with a planned composition, subject to arranging all the artifacts.  I was keen to line up Marianne to model for me as she is my go-to French first choice, but one thing after another got in our way and so the photo shoot did not take place till January this year. Although I would not use her face (see later) I still wanted a "latin" lady to set the mood and atmosphere.  I painted in the background buildings, the cart and the basics of the mini-palace arches and doorway  so we had a good idea on the spot of what was required   For the shoot I had to put the wargames table to one side, dress the room to give me a fair representation of the stone/tiled bench and upright wall and get all the stuff Marianne needed to handle and wear and we were set to go. 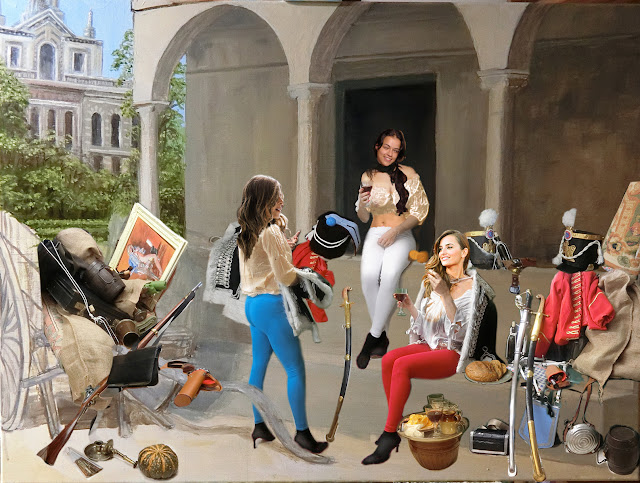 This looks pretty stark because it is just cutouts with no shading or artistic effects other than resizing objects to fit. However, this gives those who have asked me a fair idea of where I'm coming from to get the final compositions. Marianne wore three distinctly different sets of blouses, leggings, scarves etc and different hairstyles and we tried each character in many positions so I had about 100 photos to choose the three that suited me best.

Here is one I did not use just to give you a flavour. I decided I wanted poses where all three girls interacted with one another, it makes a much more coherent "story". 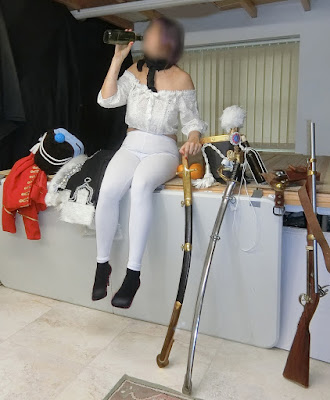 We had to decide what sort of features Ian would like for these fictitious Aides de Camp as it gives me something to aim at, though we are not after celebrity portraits. He chose Latina type actresses, Michelle Rodriguez and Penelope Cruz, and I stuck with his theme and went for a Panamanian fashion model blogger-influencer, Pam Hetlinger, for the third. I did not achieve great likenesses but he seemed to like what I came up with fairly quickly.

I hope you've enjoyed this rather different blog post. Something for the military equipment  enthusiasts, the Hussarette fans and the painters among my readers. Any thoughts or questions welcome in the Comment box, thank you for visiting.  (Oh! -  the obvious one - 72 hours on the canvas over three months, but countless hours in preparation, and the cost is north of £750).  And if you want to discuss a military - themed commission without obligation please email me  Chris Gregg

PLEASE NOTE: it's flattering to see my art work shared on the internet just by people who like my work and want others to see it, but the artist still retains the copyright. I own the copyright of all these images except the 8th one - paintings of three hussars, and I'm sorry I don't know who to credit for those. So if you post or copy elsewhere please credit me by name and preferably make a link back to this blog post, thank you.  I'm currently posting all my new work on Instagram as @chrisgregg173  or here's a link www.instagram.com/chrisgregg173/