First of my reports on AMG 16


No doubt I will be only one among many of the bloggers who will report on their attendance at the A Military Gentleman (of the 18th Century) Forum get-together in a lovely hotel near Warwick last weekend.
Reviewing my photos I've got so many I'll have to split my reporting. However, there must have been something about the lighting that conflicted with my normal wargame photo taking method as I've had to ditch very many and only used a few of the poor ones. Happily many turned out good.

This first report concentrates on the main event for me which was the refight of The Battle of Soor, 1745, during the War of the Austrian Succession. This was certainly the biggest and best 18th century wargame I've ever taken part in, at around 1500 28mm figures. It was put on by Robbie Rodiss and Colin Ashton from the North-east of England whom many readers will know  from their wonderful blogs (see my side bar).  They provided both armies and the terrain. Figures, I believe, were mostly RSM and Minden and looked an absolute treat to my envious eyes. Rules were "Honours of War" and for that reason the game was a bonus for me as I'm keen to start using them regularly myself. (See my previous blog post) . Two games were played during the weekend, I'm just describing the one on the Saturday

The participants and umpires

The Set-up
Basic objective was for the Prussians under Frederick to push the Austrian army off the main road through Soor and the big hill which was on their line of communication.  For convenience all references to flanks will be from the Austrian perspective. 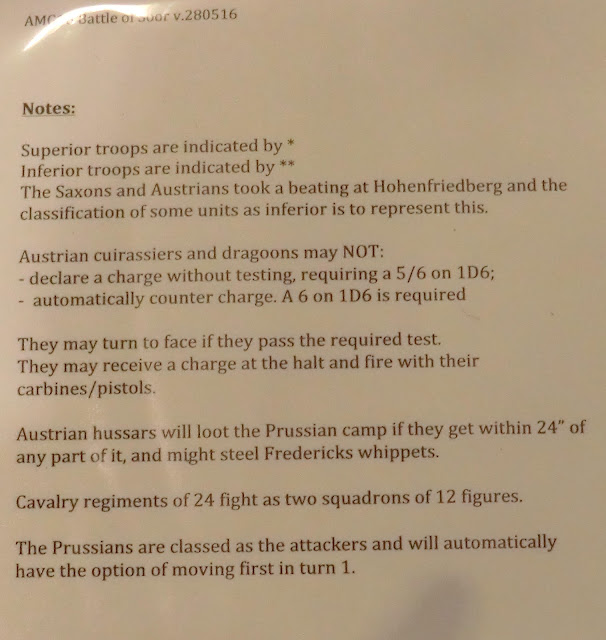 Battle is joined
About this point I asked how Colin and Robbie would decide the outcome - were Army Break Points relevant? A quick tot up found the alarming truth that we were both not far off with Prussians having lost 10 points and the larger Austrian force 12. Moving towards a nail biting climax then, but in a big battle like this there were many opportunities for the deciding factor, and many distractions for the wargamers as the umpires were pushing us on at a cracking pace!
I guess something critical was happening elsewhere though, as amid the hubbub, I heard Gary shout
"That's it !"   and he was shaking my hand across the table. "Excuse my ignorance", says I ,"but who won?"   "You did " he replied with a friendly smile.

How's that for a close result, and great credit to Robbie and Colin for such a well balanced game that kept my attention somewhere on the tabletop for  the whole 5 hours of playing time and got me so distracted as commander I didn't even realise we were winning. Thanks to all concerned for a very enjoyable game played in the spirit of "Military Gentlemen of the 18th Century".

More thoughts on "Honours of War"
Colin and Robbie had tested the rules with big battles before but still accepted they were developing thoughts. Gary had played three times and displayed a very good grasp which helped keep up the pace . I knew a bit from my test games so was able to follow what was happening. Not sure about the level of knowledge of Steve, Mark and Stuart but they all seemed to manage very well under umpire's eyes. It was great fun having Robbie as an unashamed Austrophile umpire but since his advice proved about 50% sound and 50% c**p I don't think it affected the result. HoW handled all this mayhem extremely well and I'm looking forward to trying bigger games myself.

The national characteristics were applied so the Prussians got extra initiative for Moving and Firing and could manoeuvre and change formation with little or no deduction. On our part the Austrian guns were Superior when firing. Given the Prussian army was smaller and attacking uphill these helped to balance the game well.  I think heavy guns were able to move, change angle and fire a bit too easily for this period though. Our hosts had reduced all canister fire to 30cm as they believe it is too effective at longer range and spoils the game; I reserve judgement till I've tried the longer ranges. For my part I felt that grazing fire for round shot through every line within 30cm was too effective given that in reality every bounce was shorter than the preceding one. I'll have to read the rules and have a think.  The rules are totally dismissive of "Ditherers" as Commanding General to the extent it is detrimental to let one come within command range. This produces the unrealistic side effect that I was told to put mine as far away as possible. I would like to see them at least have the possibility of rallying off casualties within the safety of their own lines. My rationale is that a bunch of top brass would probably have some enthusiastic aides and subordinate officers who could gee up the morale of flagging troops even if M'lord Elektor, or whatever, is a dolt.

None of this detracted from my enjoyment -  thanks once again to all concerned. Another report on AMG 16 as soon as I can manage the time