Trying the HoW test game of St Ulrich

Now I know I've left readers hanging without an account of our great Rank and File Napoleonic weekend in April, so apologies,. However that is quite a daunting prospect to report properly and blogs are supposed to be more topical so the flavour of my month is currently Honours of War (HoW).

I'm supposedly primarily an 18th Century wargamer, but you are excused for not noticing that as my 18thC 28mm figures have had little airing of late. Two things came together to spur me to on-table action at last. The first was buying the HoW rulebook early this year, then finding that Colin Ashton and Robbie Rodiss in the North East of England were reporting good things about their test games. Then they offered to run one at the A Military Gentleman (AMG) convention coming up very soon and I volunteered to have a go as a player.  Better still, newly acquainted with fellow AMG member Ken Marshall, a resident of nearby Wiltshire, a practice Imagi-nations game using HoW became a real possibility.

I realised that the terrain on my table which we had used for our R and F game (see here for basic terrain set up) was not far off Keith Flint's basic test game in HoW - called St Ulrich. So here is a map of how I adapted that for an 8 ft x 6 ft table.


Using a larger table than in the book I augmented the forces by an infantry regiment per side, then one more cavalry regiment for the French matched by one extra cannon for the Imperial force.
Here are the orders of battle we used
FRENCH

I gave three leaders per side including the Commanding General and rated one Dependable and one Dashing, reasoning that we wanted to get action to test the rules, and we certainly did.

The objective was simple in that the Imperial force had to defend a bridge across an impassable river (suggested visually in our game by a dense belt of trees along each bank) and the larger French force had to take it and then advance on to take the town of St Ulrich.

Game One
For the  first game I had set the forces up roughly in accordance with the rule book scenario and Ken, who was the French commander, opted to keep them like that. I made one change by moving my cavalry to a slightly wider flanking role. Here is a photo of the start. 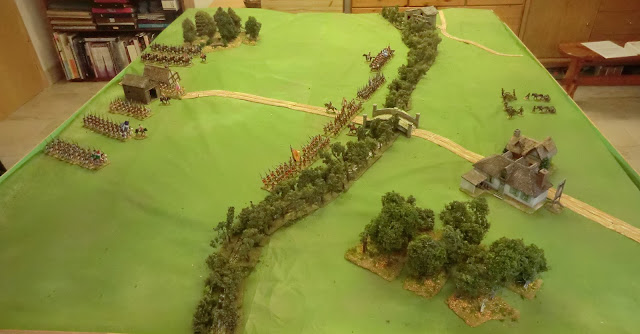 And I'll let the photos tell the story of this one.
Poor Ken seemed to be suffering reverses along his front and, being an 18th century military gentleman at heart, muttered something about "I really ought to order a general retreat at this point" My response was "C'mon, we can still get another move in before lunch and these rules needs stretching"

That was Move 7, we had played for about 2.5 hours and both agreed that, although neither side had actually reached its Break Point (3 average sized units lost), Ken had no chance of getting near the bridge and it was an Imperial victory. We repaired to the appropriately-named Butchers Arms nearby for a pint and sandwiches and to discuss how to proceed.

Game Two
One possibility was to reinforce both sides and play on but that would have meant organising more suitable units and rebalancing the sides. We thought it simpler just to swap sides and use the map to mark our revised opening dispositions.   Rather than go through the game as above I was delighted to receive a write up by Ken written in an entirely unbiased style :-) and accompanied by the words "He who writes the dispatch gets the victory so my comments/ alternate dispatch on the second game is attached." I will illustrate it with appropriate photos where possible.


"Sir
By this dispatch, I have the honour to report a glorious victory over the French invaders by your gallant rearguard. The enemy have today been given a bloody nose, prevented from crossing the River Schwartz and scattered. It is unlikely that they will trouble us again.
Following your orders to hold the bridge at St Ulrich, I deployed the infantry and cavalry to defend the western approaches to the bridge, with the artillery on the Zeitberg to the east, overlooking the bridge and positioned to support the left flank infantry. General von Reife’s infantry were deployed to the south and on the Mulheim road, with the cavalry to the north on the right flank, where they could take full advantage of the open grassland.

The enemy were soon sighted under the command of the Chevalier de Neuvalee, debouching from Mulheim and deploying into two lines of infantry. Supporting cavalry was on both flanks with artillery advancing to support their centre.

Rather than be caught with our backs to the Schwartz and no room to manoeuvre, our infantry advanced and engaged the enemy in musketry. I am pleased to report that our musketry was effective and we inflicted many casualties on the opposing French regiments before weight of numbers told and our Grunberg Infantry and von Bogenhafen grenadiers were forced to retire.

Mention must be made of the conduct of the Erbprinz Regiment under Colonel von Dickmeis, which was in the highest standards of the army. They flanked and fought off two infantry regiments, stabilising the line and forcing the enemy to retire. I commend the regiment to you. Whilst they are not considered grenadiers, the examples they have today set to the rest of the army in steadiness and dependability under fire are in accordance with the highest standards and traditions of the imperial army and grenadier corps, and I would suggest warrant the award of grenadier honours. (A running joke with Ken that I had used Grenadier figures not given them special status - but I just love those Old Glory Prussian figures in the march attack pose and we didn't want another elite unit. CG) 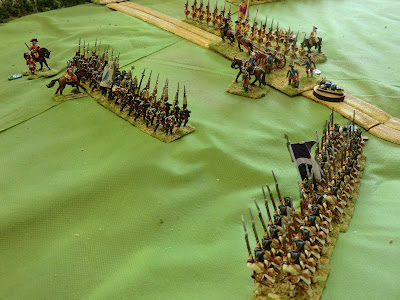 I must also commend to you, General von Brezel and his Grunberg Dragoon Regiment. Having dominated the right flank and dissuaded the enemy dragoons from advancing for the majority of the infantry battle, they seized their opportunity and countercharged an incautious advance by enemy dragoons intent on threatening our flank. Their sword play was a sight to behold and they defeated and put to flight their opponents, giving us mastery of that flank. 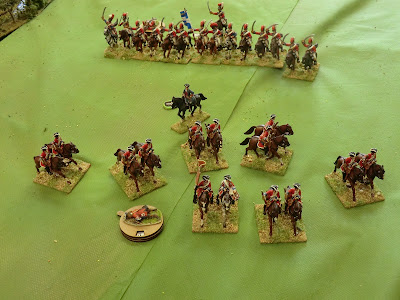 Mention must also be made of the enemy’s right flank cavalry. Having shown no desire to close with our infantry, they eventually formed into column as the firefight petered out and began an advance toward the bridge, the way being temporarily open whilst our infantry reformed. Advancing in a column formation into medium range of our artillery, it took only a few rounds of shot for them to be sent scurrying away back toward Mulheim.
With the realisation that the same fate awaited any other attempt to cross the bridge, and with half his army attempting to reform, the Chevalier de Neuvalee abandoned his attempts and signalled his battered army to withdraw.

We are reforming before continuing to retire in accordance with your orders.
I have the honour to be your humble servant,
Count von Grunburg,

"Of course it's not the real truth as an independent third party observer witnessing the engagement might write (or paint) but I suspect the Count isn't going to pen something for public consumption that says his premier line infantry regiment ran away like a bunch of cowardly girls at the first smell of powder and he was only saved by his artillery and the unwillingness of the Chevalier to risk his men forcing the bridge. That I'd leave to the French general......... (thanks - see my captions - CG)

"As it stands, the Count has enhanced his reputation to the benefit of his future political aspirations, the Erbprinz Regiment have a reason for their grenadier status (if you ever needed an excuse) and there will be some rivalry between the three infantry regiments who know the truth about what happened that day. I also did hear that the Erbprinz Regiment had taken to referring to von Bogenhafen's grenadiers as marines because of their ability to cross watercourses under fire (backwards!). One of the joys of Imagi-Nations is that they write their own history whether you like it or not."

What did we think of Honours of War?
By Ken:
"I thought the second game was more interesting than the first because we were a little more familiar with the rules. Command, control and knowing when to retire units to rally looks to be the important lesson. And the impact two guns can have on a column at medium range, if you are lucky. That did more to change the outcome of the last game than anything else. That was a surprise given their performance during the rest of the games was not memorable."
By Me:
I loved the speed with which things could happen. Yes if you had lots of poorly rated generals it would be a different story, but we used the Austrian capabilities for both sides and they seemed a fair balance of routine predictability with the occasional flurry of unexpected opportunity.  Once in a fight units don't last very long so expect a small scale engagement like this not to last long (both games were about 2.5 hours to get a decision based on achieving the terrain objective; Army Break points would take a little longer).  This is great because, even with the troops I have at the moment we could triple this size of game and Ken's planning how we can combine his armies with mine in the future. So, subject to more testing,  I think these will give us plenty of scope for multiplayer Imagi-nation and historical games. I won't go into detail about the rules but just say  - Well done Keith Flint for coming up with something that gave us an 18th century feel yet had enough flexibility to allow for good generalship and erratic dice throws providing fun games and a generally satisfying experience.

Finally thanks to Ken.  It was our first meeting and a great day for me in the company of a knowledgable and gentlemanly opponent. Just what you want from your wargaming.