I've given the introduction to the game in waterloo-project 1:100 refight and followed that with several posts on how I made the terrain. Now on to the first of our refight wargames at 1 figure represents 100 men. This took place over 2 days on the first weekend in June 2015.  Paul D of Cheltenham did all the organisation, wrote the rules and provided all the figures (just part of his 28mm Napoleonic collection). Players came from Cheltenham, Gloucester, Stroud (Gloucestershire), Bristol, and Aylesbury (Buckinghamshire) and it took place at my house in a secluded Cotswold village. 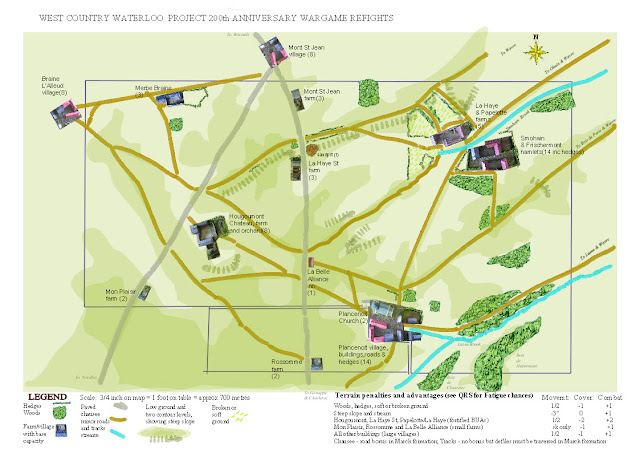 And this one from Mark Adkin's "The Waterloo Companion" shows the historical dispositions which we more or less followed. Refight 1 is based on the premise of historical deployment followed by wargamers trying to use it to advantage. Our second one, this coming weekend, is "Le Woteef" scenario giving commanders a freer hand. 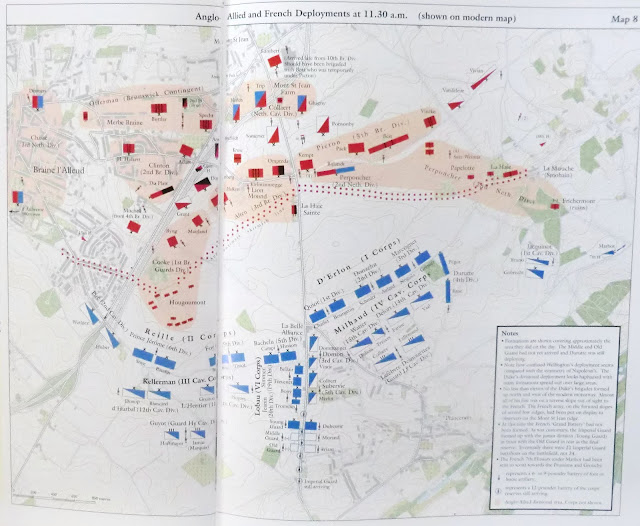 The Rule system
Paul's rules have been honed and simplified over many years and have standard unit sizes of  24 infantry and 9 cavalry representing coherent bodies of troops roughly 2,500 and 1000 men in historical size. In a similar way that Charles Grant translates historical strength to match his "regiments", Paul adapted the historical orders of battle to match the size of his "brigades". In each case the figures represent some of the more iconic units within a brigade, for example Scots Greys are used to represent the Union Brigade. Compromises also have to be made to fit the command system, so for example the 4 Divisions of D'Erlon's Corps were represented by D'Erlon and 3 Divisional commanders but still had 8 "brigades" of infantry and 2 of cavalry. The aim was to get armies that still had all the character of the originals, covered the same scale area, and had similar battlefield problems to overcome.
Fitting in with the rules and their deliberately adaptable ground scale Paul had sited the French grand battery further back than its historical counterpart but gave reasonable visibility, making some allowance for French troops in the valley below and the good concealment of Allied troops on Mont St Jean (MSJ). I had misgivings, having designed the battlefield to scale, but to Paul's credit the result worked very well and felt right to the players.
The game goes along on an initiative system whereby the Commanders in Chief choose subordinate commands to go alternately. The Command figures are important to activate Corps and Divisions and keep them attacking or recovering. Tactical actions are very simple "hits" and representative, having a morale test for every "Fatigue" point suffered and a diminishing scale through Fresh, Tired to Exhausted, with Morale status of Shaken, Disorganised and Broken. As brigades are broken the "Fatigue" level of the senior commander also diminishes till unfortunate results occur for the rest of his command. Paul introduces random event cards into his games to add flavour and he wrote some special ones for Waterloo.

I was making the coffee while each side made its plans so I was told later, in my note taking capacity, that the French had recognized the value (given by the umpire) to Hougoumont and would try hard to take it while shifting Reille's corps to the left flank and rolling up the Allied right (the left hook of "what-if" fame). They would refuse their right where terrain was very broken up. With Ney in charge for the opening sequences it did not quite work out that way!

I was also advised that Wellington had emphasised the importance of holding the good position on MSJ ridge but Hougoumont was more expendable. Instead the Allies would shift a lot of their reserve to their right and make an all out attack on the French left flank. The expectation was, as historically, that the Prussians would arrive to safeguard the left flank. This plan too proved subject to change in due course.