Waterloo Project: Making the buildings for the whole battle

Here is the follow up to my previous post on making the Waterloo terrain colouring the big-battle terrain.

This was hard for me as an artist and very visually stimulated wargamer, but any scaled up wargame has to make a lot of compromises over size versus history versus playability. We did a lot of homework on the sizes and shapes of the built up areas and the ground scale for the game. We concluded that I could just about get away with buildings sized to go with 15mm figures provided I took into account the immediate surroundings of woods, orchards, gardens etc in the the total footprint. That also meant that representing the exact configuration of the farms and chateau buildings would be impossible so I had to settle for something with the right character and look that also did the job. I had no pre-conceived ideas about what to use. We pooled resources but the collection of 15mm buildings we had contained very few that were suitable.

The lightbulb moment came when I remembered I had two sets of each of the series of 15mm Waterloo card buildings produced by Pireme Publishing and marketed by Miniature Wargames magazine quite a few years ago. They produced one for Hougoumont, one for La Haye Sainte (LHS) and one for La Belle Alliance (LBA). These are 1:1 scale at 15mm so you got a lot of buildings for your money and the LBA set was padded out with an indeterminate Waterloo style farm too. So, going back to the premise stated above, I did not get obsessed about following the instructions to produce lovely, but hopelessly oversized replicas, and instead treated it as a creative activity just cutting and sticking the nicely printed components as I needed in order to match the required size and character.

As you can see from these photos, apart from the church and the small stone cottage in front of it, all the buildings have come from the Pireme kits. What isn't obvious is that across the battlefield all the buildings are glued down to avoid inevitable shifting during the games and some of the roofs come off but others don't. Everything I made had to bear in mind sensible deployment of units in standard base sizes of 60mm x 40mm. That included all courtyards and roads passing between buildings, but I also made some roofs to come off if the building was big enough to put a base inside. As you will see from the game photos it mostly worked out OK. The card the houses are printed on is not very strong but easy to cut. So, especially where roofs came off, I had to reinforce the walls with balsa cut to shape.
Just for fun here is a photo of what MSJ Farm looked like in 2014 when Kevin and I did our battlefield tour. 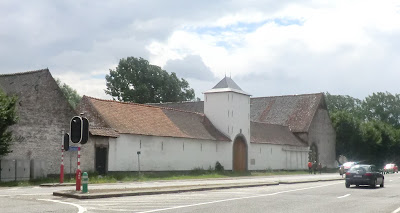 So you can see mine is nothing like it and I just fall back on the concept of deviation for pragmatic purposes rather than ignorance!
Just a few words about the hedges as they were pretty simple.  They were of two types. Many, particularly around Papelotte, were converted from ones I had made from rubberised horsehair for 20mm scale World War Two games. I split them in half making them slimmer but still fairly tall as we were putting 28mm figures behind them. The rest were made by cutting strips from some green sponge packing I happened to have kept (Yes - hoard it - they always come in handy for something!!!).  All of it was painted a darkish green acrylic base coat and then when dry highlighted with lighter greens. Finally all the upper surfaces were coated with PVA and sprinkled liberally with light green scatter to give the effect of light catching leaves. On various stretches of hedge I altered the profile with the addition of extra foam or bits of tree (see later) so it wasn't too uniform. In fact the hedges leading down the hill to Papelotte should really have been lines of trees and fairly dense foliage but we compromised on practicality by using hedges with a few trees and then declared the enclosed land within as rough ground (see my map in part one of this "how-to")

I was going to go on to talk about the trees but I think this has got long enough now so I'll leave you with a parting shot of more hedges but with troops too. Trees next time.