In common with many wargamers I have a "thing" about Hussars.
In the cavalry test game for our 1:3 scale Waterloo rules you might have seen some of Kevin's Perry Miniatures British Hussars in the background, painted as KGL, and I thought they looked pretty cool.
here is a photo of some. 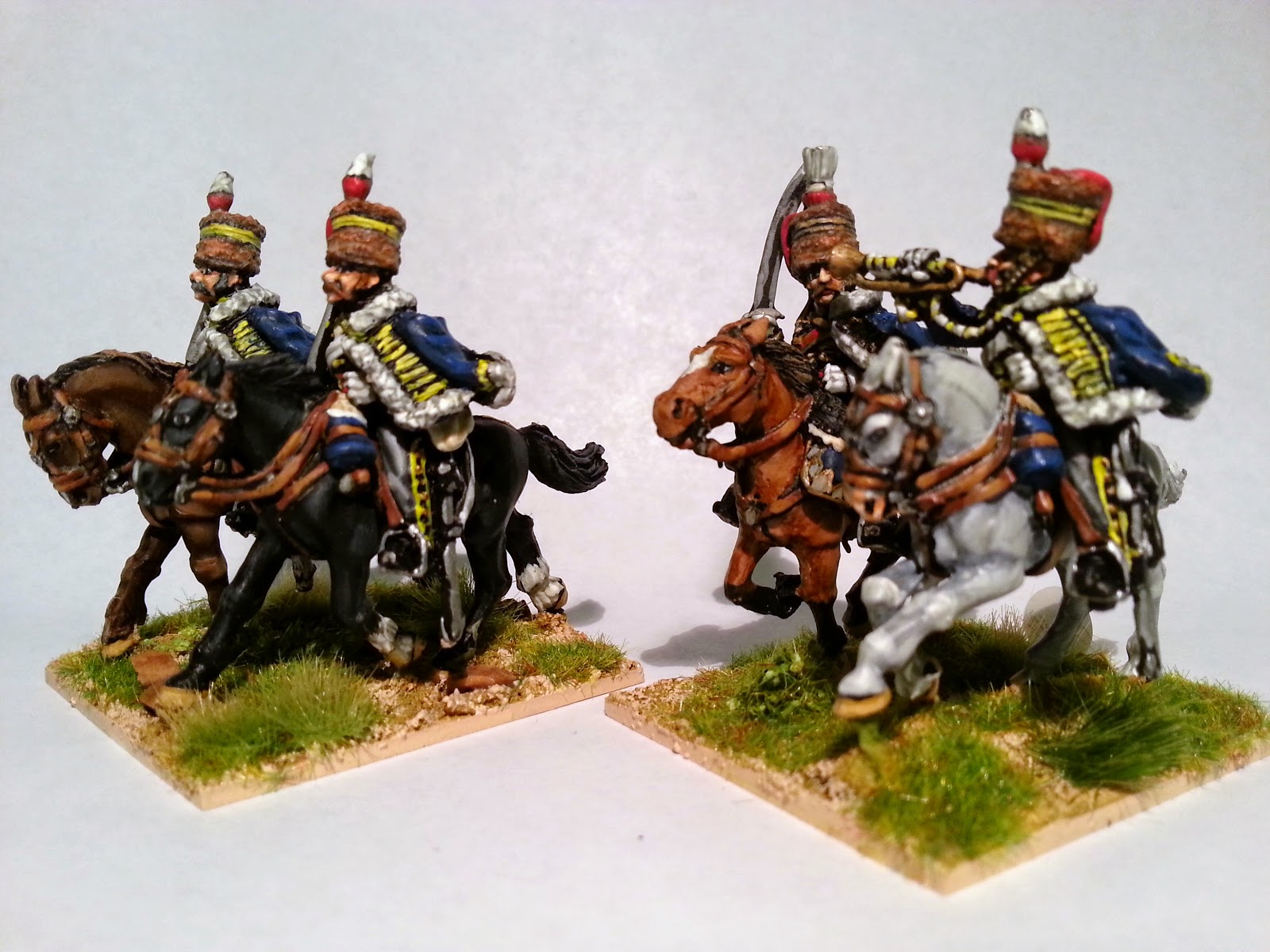 A bit of research suggested to me that Lt Col Meyer's 3rd Hussars KGL were active in the Allied centre at Waterloo, helping to see off the French cavalry attacks. I should incorporate them into my La Haye Sainte weekend, and they are worthy of pretty full representation. At 1:3 scale that means over 100 figures. Kevin's would make one squadron, but then I realised he had painted the 2nd Hussars and what made them look so good was the brown fur colbacks/busbies.  Troopers of the 3rd wore shakos. :-(

So, now for one of those pragmatic decisions that all but the most fanatical of us have to make from time to time - aesthetics versus historical accuracy. I'm afraid the artist in me generally wins that battle and thus it was I happened on several batches of  "British Hussars" on Ebay last Autumn. I managed to win them all and ended up with a mixture of well over 50 metal and plastic, mostly Perry, hussars all in colbacks. Quite a lot were in the tall early version, but I didn't let that worry me as you can't really tell at "wargames distance".

I don't like boring readers with a lengthy "work in progress" blog so I'm delighted to say I finished the batch of 35 metal ones in about a month of spare time. To give you a flavour of progress here is view of them on my painting table 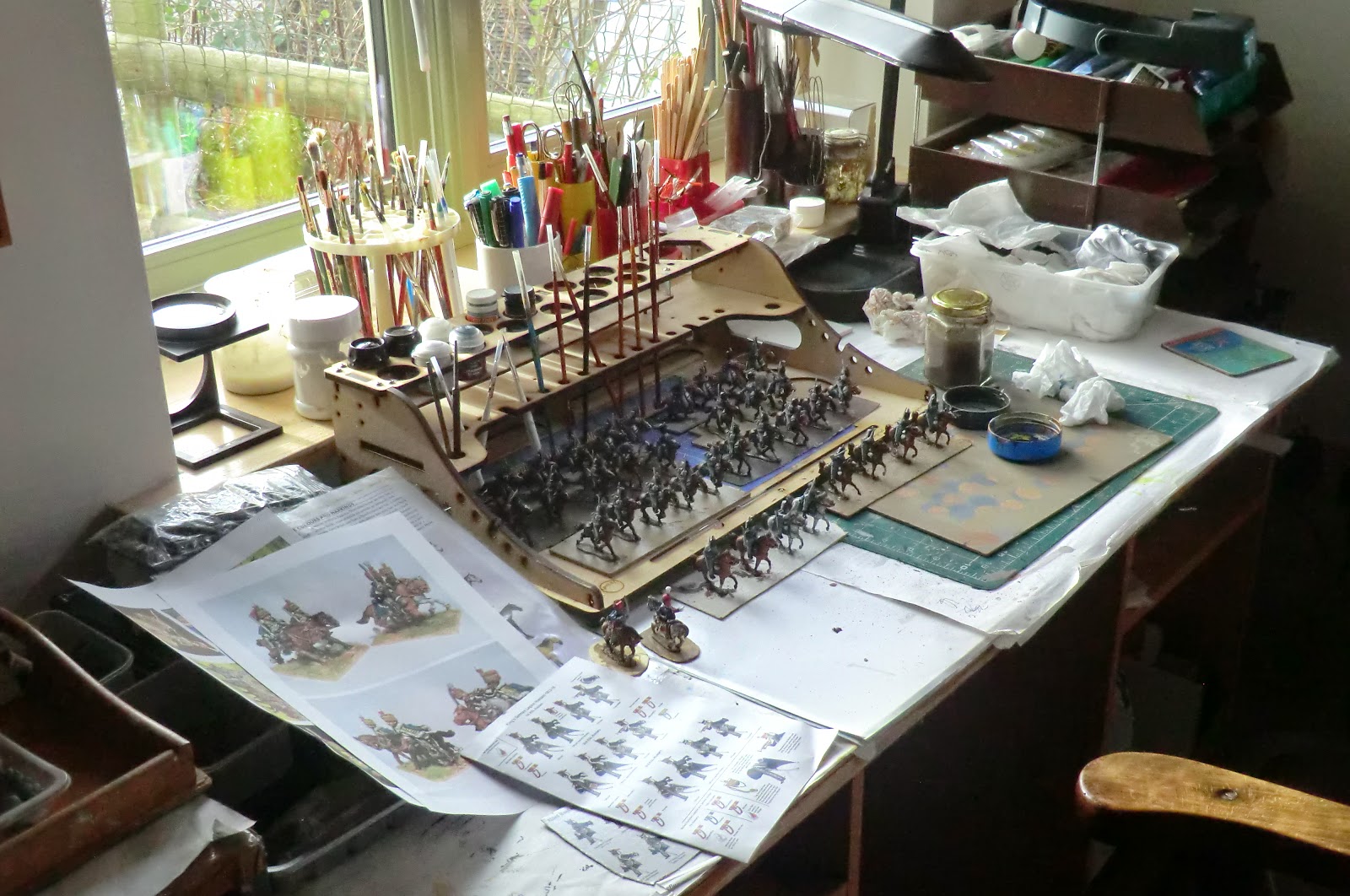 I had painted all the horses first without riders, then sprayed the riders with grey undercoat before sticking them on the horses. Now the riders are being painted, fairly spread out, which is not my normal method as I usually paint figures already on their final bases. This shot below does show the finished figures mounted on the final bases.

I cut them out from transparent plastic "jewel cases" from old CDs and computer discs; why pay for commercial MDF or plastic ones? After that I mixed an earth coloured gloop of acrylic structure gel and acrylic paint and spread it all over the bases. While wet I dipped them all in a box of natural sawdust. Apart from then adding grass scatter when the sawdust is dry that's my basing done, very simple but quite effective enough for gaming, in my opinion.

Here are photos of them "on parade". 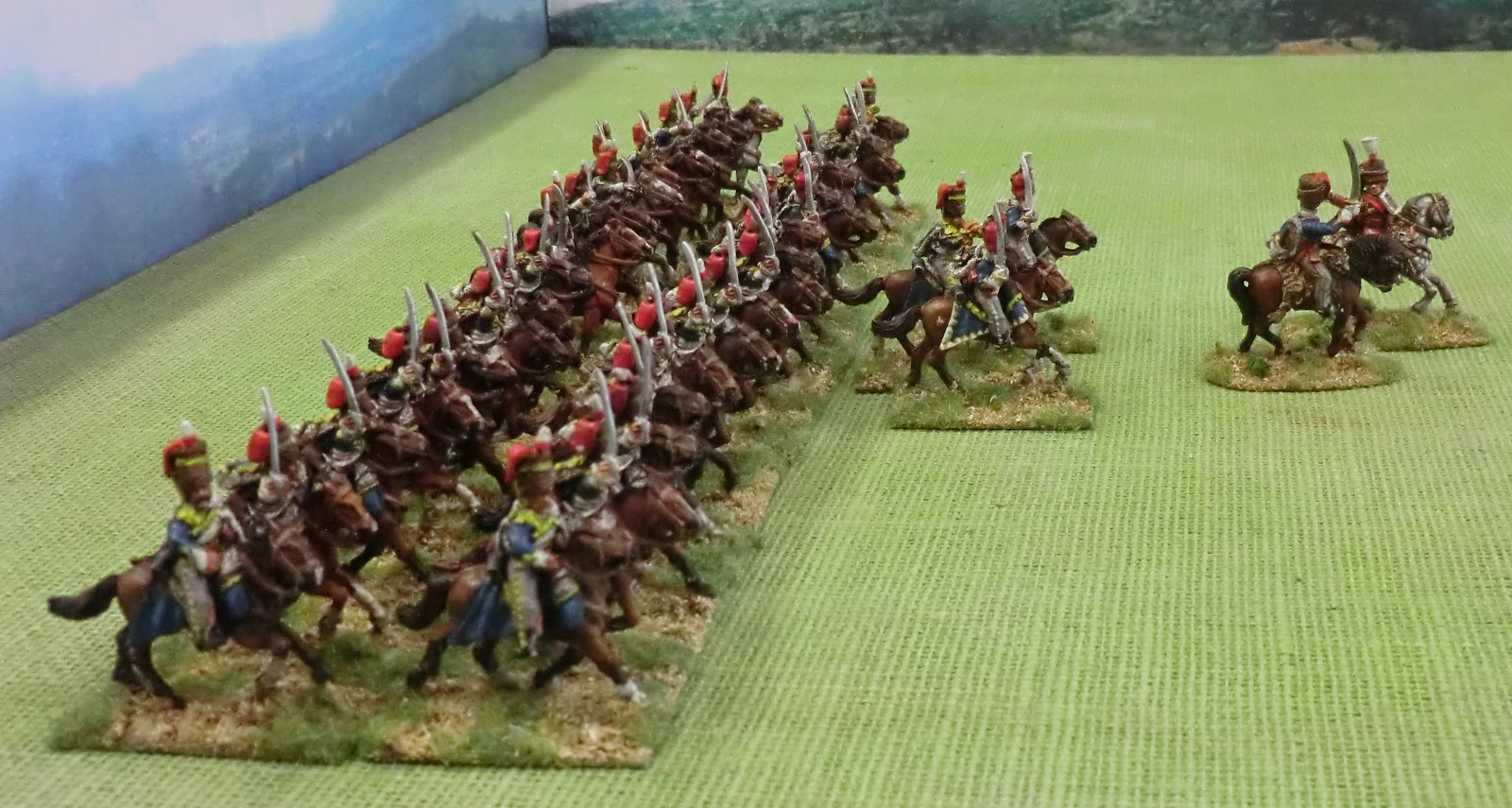 Above and below: classic two-rank formation with squadron officers and trumpeter leading from the front 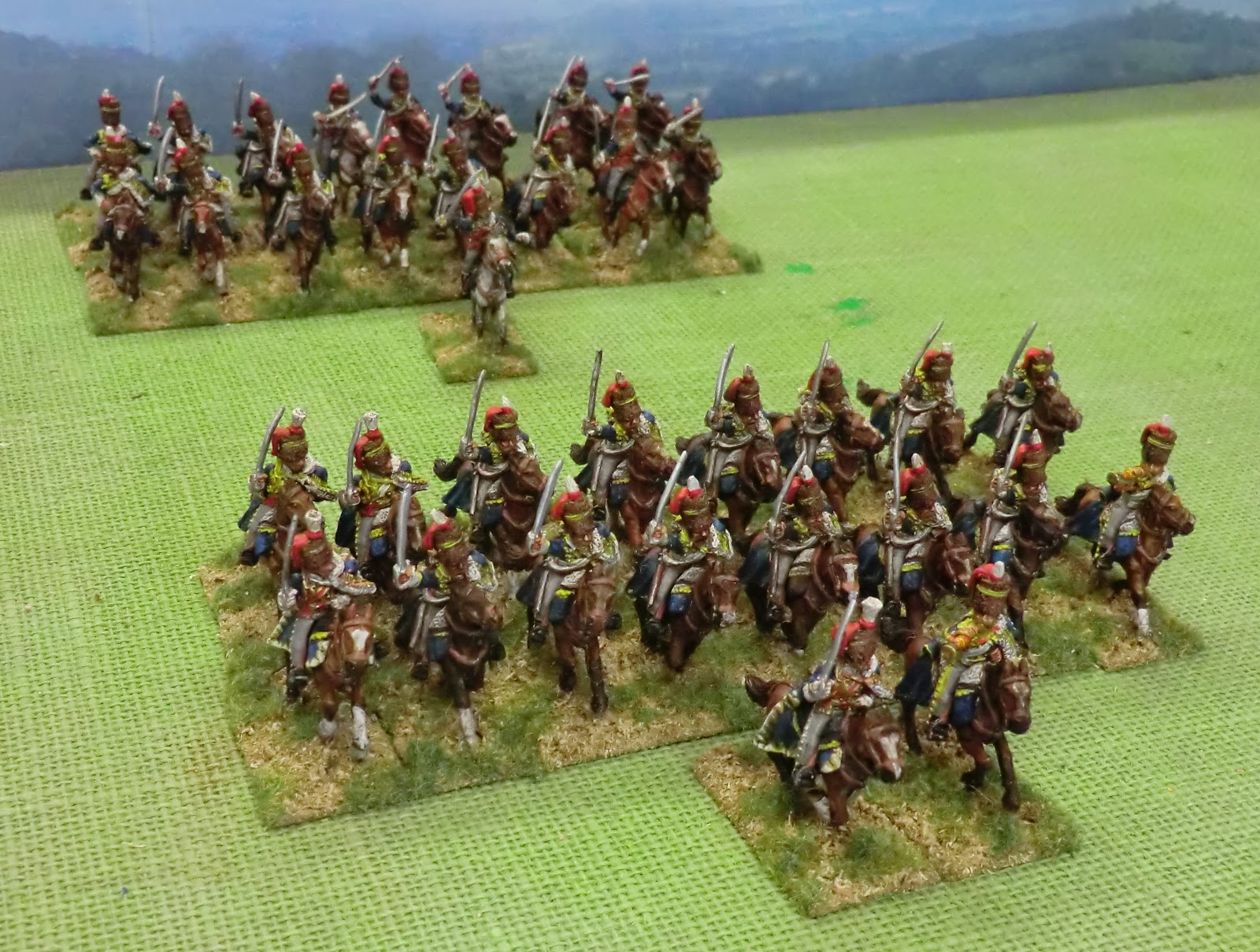 Above and below: Charging by troop or company,  front and rear view 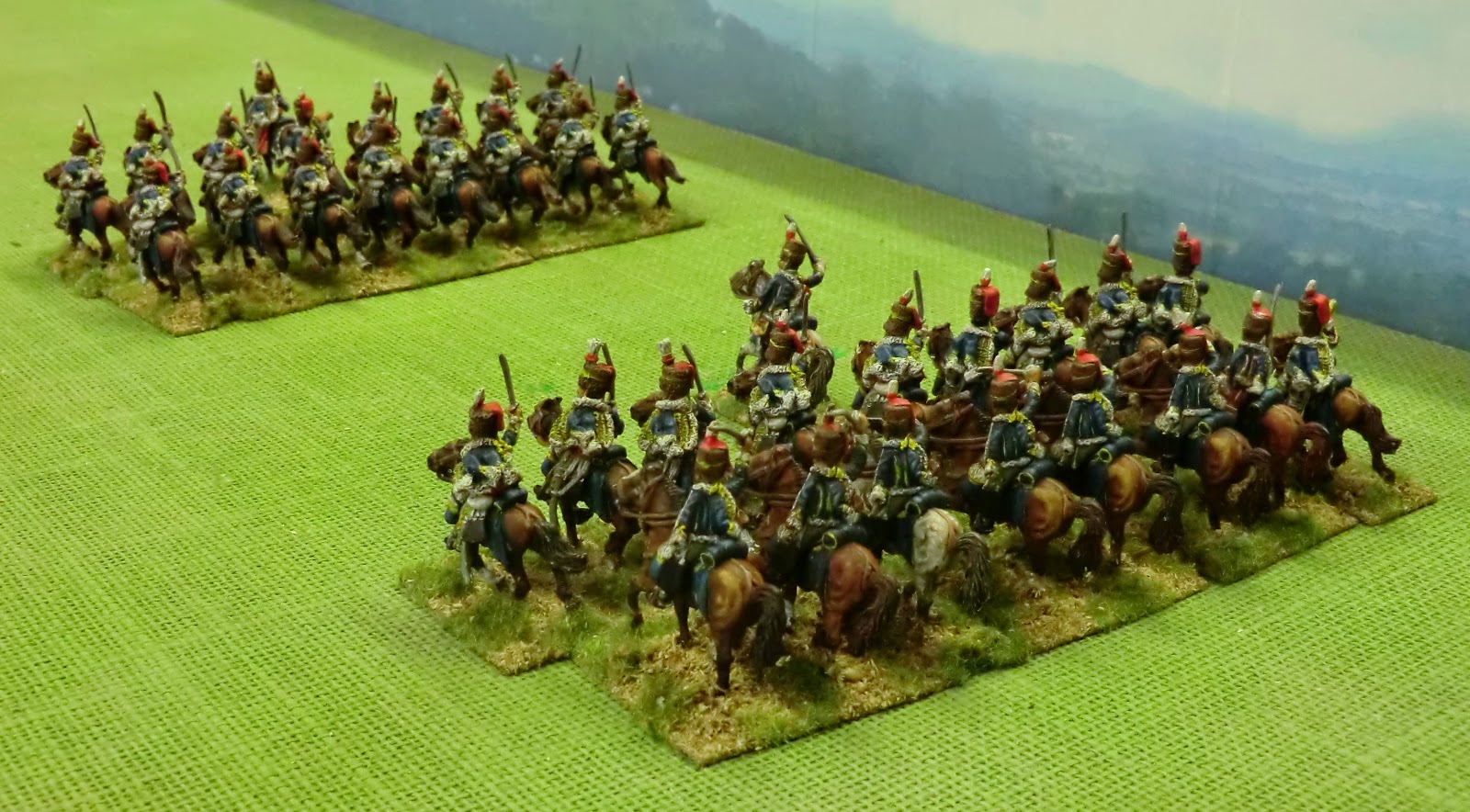 Finally, a view in column of march 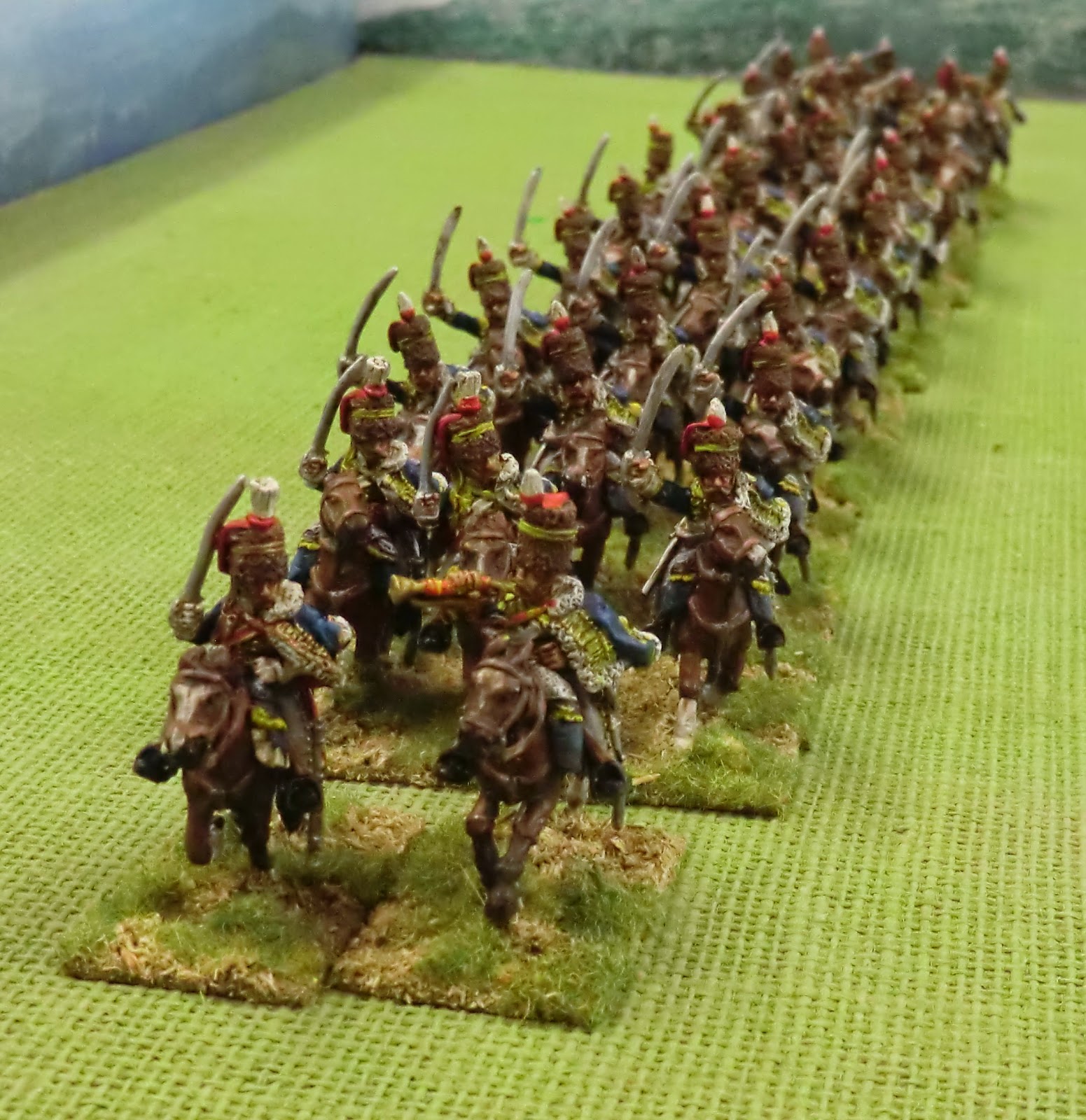 You may have noticed two extra officers out front in the top parade photo. Here is a better look at them 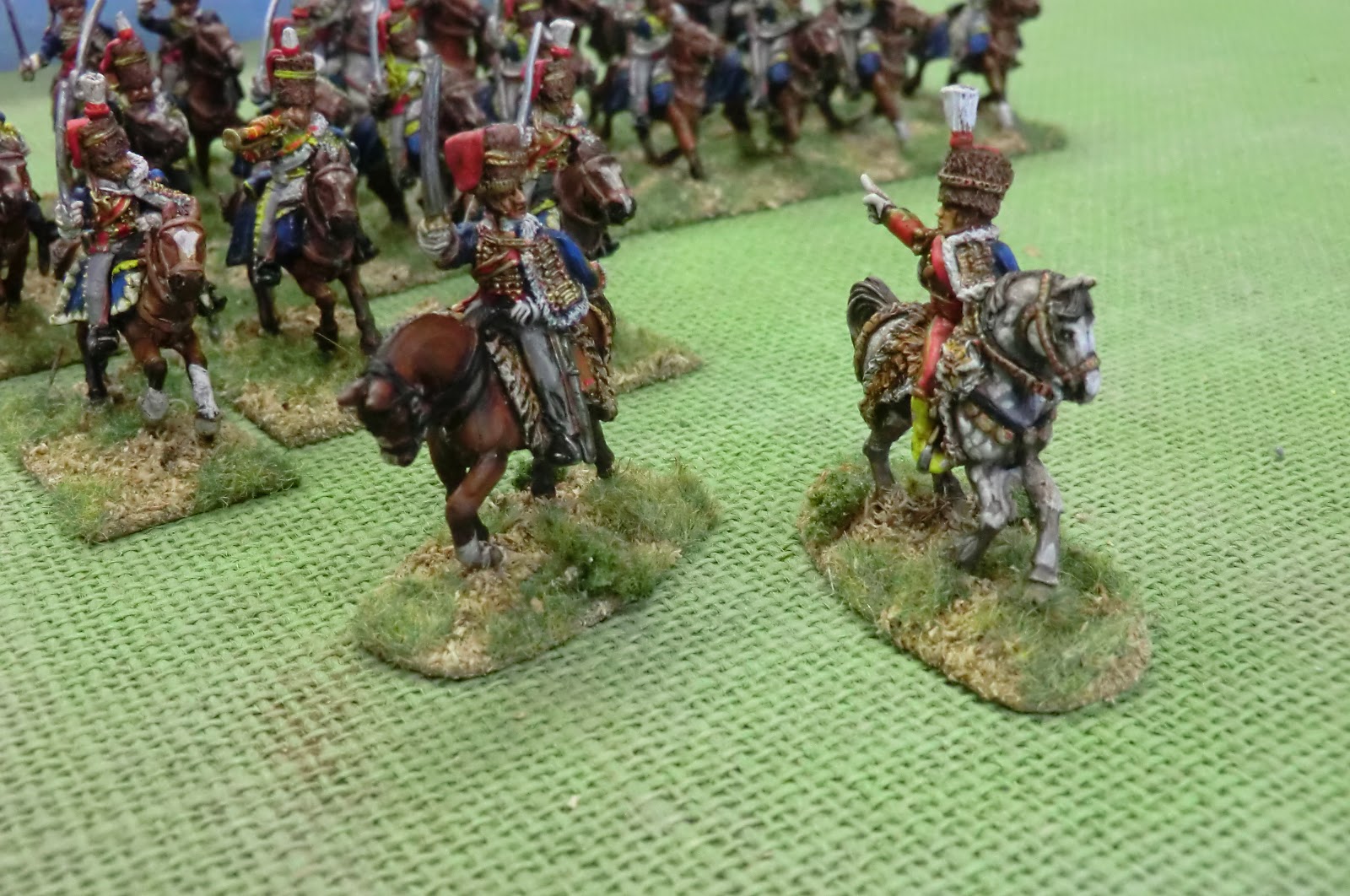 Both were bought on Ebay as the Earl of Uxbridge, commander of the Allied cavalry at Waterloo. I painted the one on the right (below) as a KGL Hussar Colonel, so the final three squadrons will have a leader. The one on the left is painted as Uxbridge. As usual multiple reference sources gave plenty of choices of uniform but I opted for this smart red dolman and breeches with blue pelisse and yellow boots so that he would stand out from all the blue Allied Hussars and Light Dragoons in our games. 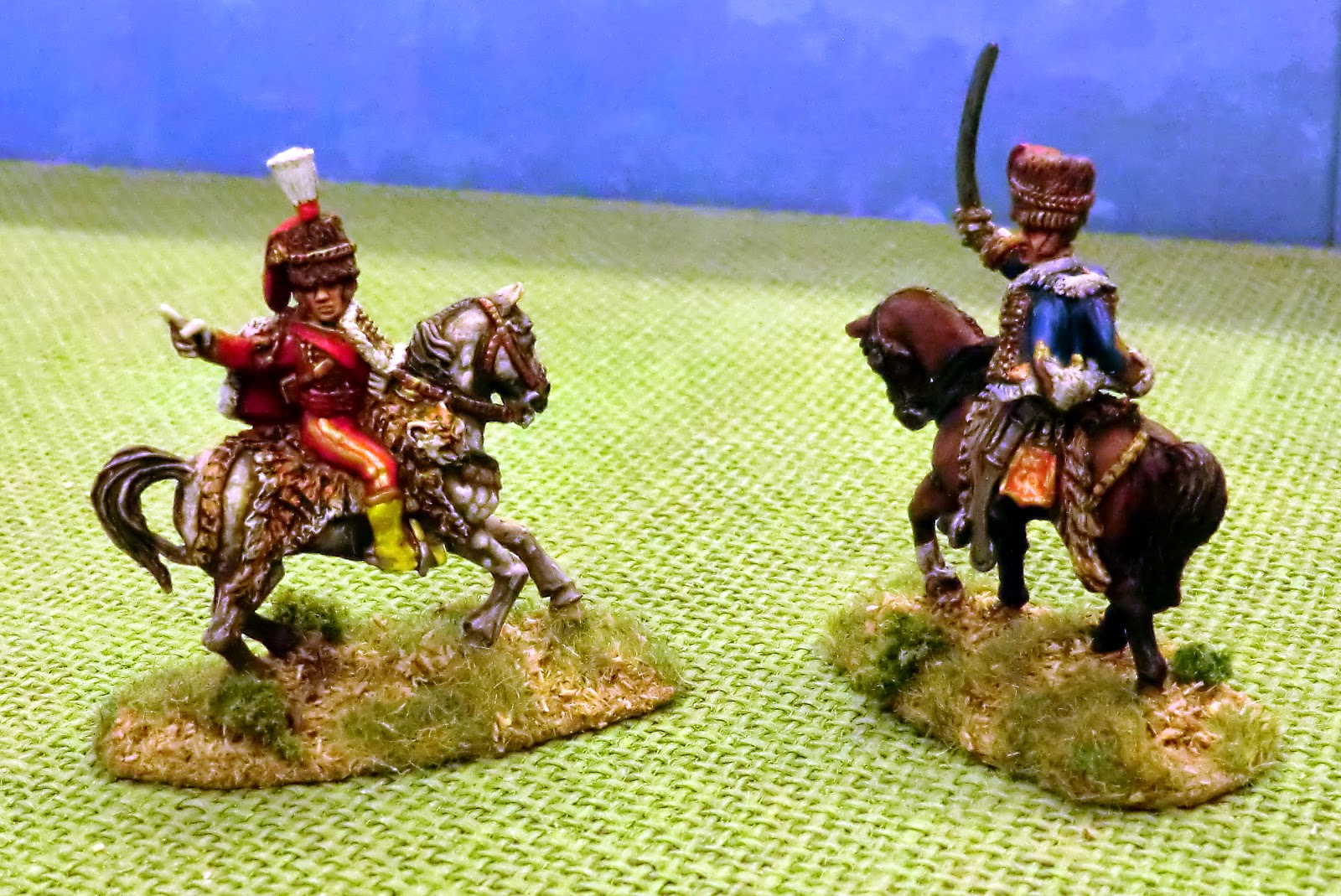 Now I'm getting on with squadron two which is composed of 40 Perry plastic hussars all with the correct KGL peaked colback. However, I have two large rules test games to stage in the next 5 weeks and can't guarantee I'll get them finished by then, but all three squadrons in the main game in July should be a fine sight.