Here is an opportunity to show my latest SYW squadron. They are my first Minden Miniatures and are French Dragoons which I've painted as the Royal Dragoons, one of the few dragoon regiments to wear blue. I'm very impressed with the Minden Cavalry figures and I also have another squadron each of French and Hanoverians to paint when I have time. (See the Minden Blogspot from "My Blog List" in the sidebar). They are very delicate and finely detailed and deserve a better wielder of a brush than me. Take a look. 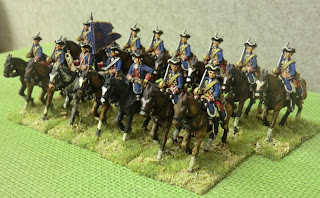 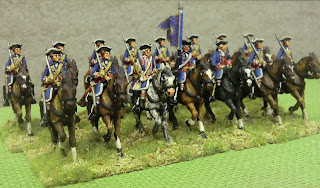 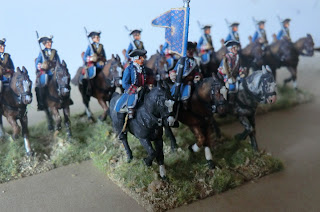 Before I bought these I asked Frank Hammond if they were likely to be compatible with my other makes of figures and his response was an emphatic No. Well, I 'd seen them in Charles Grant's latest books and had to try some regardless since I'm not too fussy about exact compatibility for wargaming. However, I can see what Frank means because, unlike so many figure designers who might save on a bit of metal by smaller horses, these horses are accurately scaled to the rider. It means that the rider is quite "petite" compared to most others. But on the wargames table it is the overall effect that matters most to me so I thought it might be interesting to show some comparisons. 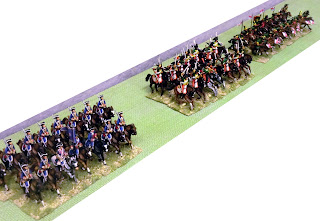 Now I'll admit that cossacks on small ponies are not a good comparison but if you look at the riders you can see that the Minden chaps are a fair bit smaller, but Perry and Foundry are much the same as each other (not really surprising considering the original provenance of designers). It also depends somewhat on how you base them. My Mindens are on 2mm MDF ready made bases from Wargames Foundry, the Perry Hussars are on the plastic bases that come in the box, and the Cossacks are on thin plastic card. So the cossacks have a 2mm disadvantage as well! But I feel that the whole unit photos show that from the usual wargaming viewing distance there is not too much difference, and it works for me. If you were fussy you could always put the Minden miniatures on thicker bases.  Let me know what you think.